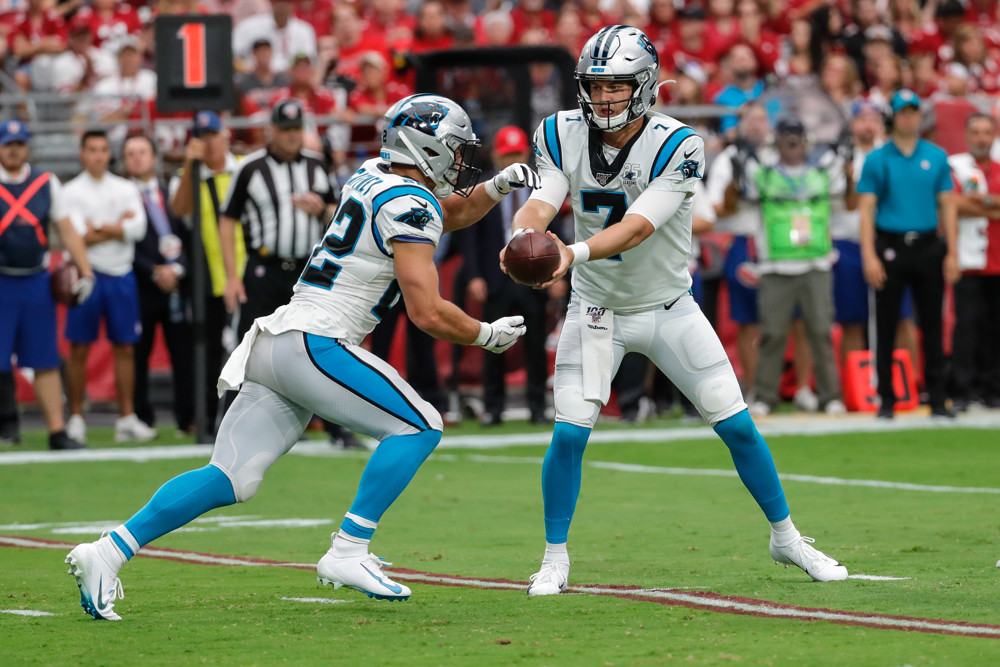 His buy-low window slammed shut in last week’s 245-total-yard eruption at Denver, Leonard Fournette will look to build on his breakthrough performance against a Panthers defense enemy backs have touched up for 85/405/3 (4.76 YPC) rushing. Fournette’s floor is raised by his passing-game usage – David Johnson and Christian McCaffrey are the NFL’s only running backs who’ve run more pass routes (118) – and Fournette remains due for positive-touchdown regression after a scoreless opening month. Fournette is a locked-in RB1 play against Carolina, which placed top DT Kawann Short on injured reserve with a torn rotator cuff on Tuesday. … For forward-thinkers anticipating a Fournette injury, rookie RyQuell Armstead is your stash after he logged a season-high 14 snaps, vultured a seven-yard TD catch, and efficiently rushed eight times for 42 yards against the Broncos. A Speed Score sleeper, Armstead runs 4.45 at 5’11/220 and is the only other true tailback to play a snap for the Jaguars this year. … Gardner Minshew’s low-volume usage and short-area passing style limit his streamer and DFS appeal, but he has settled in as a two-quarterback-league starter with to-date fantasy results of QB13 (Texans), QB18 (Titans), and QB15 (Broncos) on virtually error-free play. The Panthers present a much more daunting matchup for quarterbacks, having stymied Jared Goff (QB29), Jameis Winston (QB21), Kyler Murray (QB15), and Deshaun Watson (QB20) while leading the league in sacks (18) and QB hits (35).

Favored at home and leading the NFL in touches (111), rushing yards (411), and yards from scrimmage (629), Christian McCaffrey is once again the top RB1 play of the week facing an okay-not great Jaguars run defense that yielded 84/354/2 (4.21 YPC) rushing to enemy backs in Weeks 1-4. There’s not a ton more to say about McCaffrey, who has accounted for 16 touchdowns and 105 receptions in his last 16 games. … Kyle Allen’s outlook is very much tied to Jalen Ramsey’s (back) availability; Jacksonville held Weeks 2-3 opponents Deshaun Watson (QB22) and Marcus Mariota (QB23) in severe check with Ramsey in the lineup before none other than Joe Flacco torched the sans-Ramsey Jags for last week’s QB8 score. Allen did take a significant Week 4 step back after his four-TD Week 3, looking indecisive in the pocket, losing three fumbles, and leading just one touchdown drive in Carolina’s eked-out 16-10 win at Houston. Befuddled as the Texans took away Greg Olsen, Allen is just 1-of-7 for 27 yards on passes traveling 20 yards downfield. Still 3-0 as the Panthers’ starter, this will be Allen’s first-ever home start.

Allen’s 2019 target distribution: McCaffrey and Curtis Samuel 14; Olsen 11; Jarius Wright 8; D.J. Moore 7. … Samuel presents quite the conundrum as a WR2/3 play; he is popping as Week 5’s No. 2 buy-low receiver in Josh Hermsmeyer’s Air Yards Model, and Jacksonville has allowed the NFL’s second-most 20-plus-yard completions (20), but Allen’s vertical-passing struggles are working against him. Ultimately, I’d rather fire up Samuel’s playmaking ability than not. Samuel is Allen’s most-targeted pass catcher in his brief NFL career (20). … The Jaguars’ athletic linebackers and safeties have generally scuttled tight end efficiency; when targeting Olsen’s position against Jacksonville, teams are 18-of-31 passing (58%) for 244 yards (7.9 YPA) and one touchdown. Still No. 7 in targets (29) and No. 4 in Air Yards (283) among tight ends, I’ll keep betting on Olsen’s usage as a season-long TE1. Only Zach Ertz and Travis Kelce have run more pass routes at the position. … I think Moore would be Carolina’s likeliest wideout to draw Ramsey’s coverage should he play, but that looks questionable at best. Just as concerning is Moore’s usage in Allen’s two 2019 starts; Samuel (205) and Olsen (107) have blown Moore’s 75 Air Yards out of the water with Wright (67) close behind. Moore has devolved into a boom-or-bust WR3/flex option.