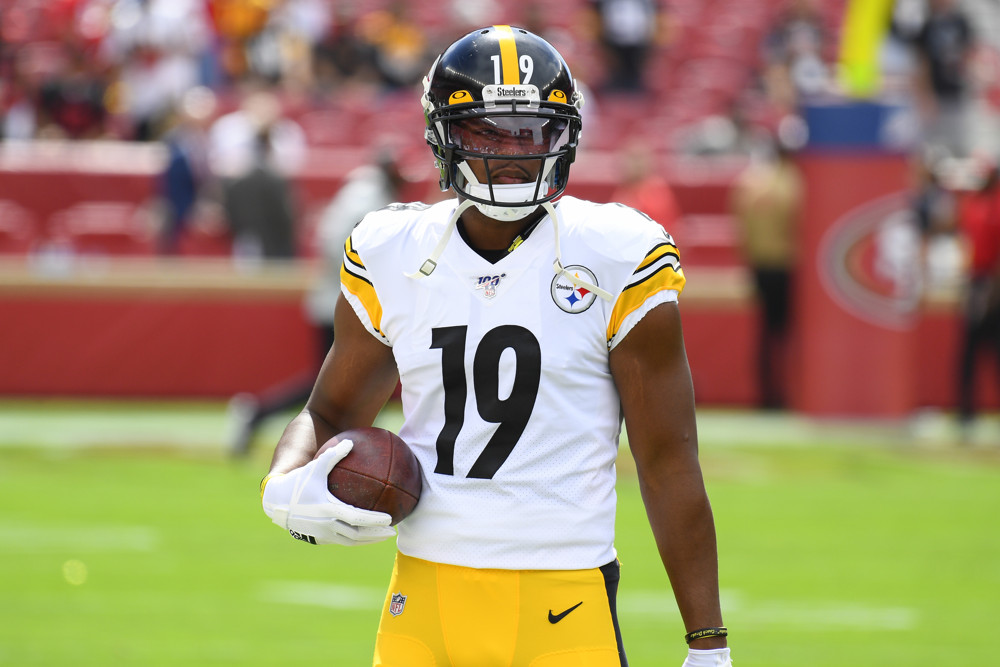 Trades are the lifeblood of dynasty fantasy football. If your league is active enough (and if it isn’t, find a new league), trades are the best way to keep your roster to your liking. And they happen all year round. But knowing how to trade is critical to finding success not only for the current deal you are trying to make, but for deals down the line as well.

Your league’s rookie draft is likely over by now. Or maybe you just completed a dynasty startup. No matter what, these tips will make you a better trader, and dynasty fantasy football player.

One of the easiest mistakes you can make in dynasty trades is focusing too much on raw value, and not enough on team goals. This goes for both yourself as well as your trading partner. Consider this section of our rankings. 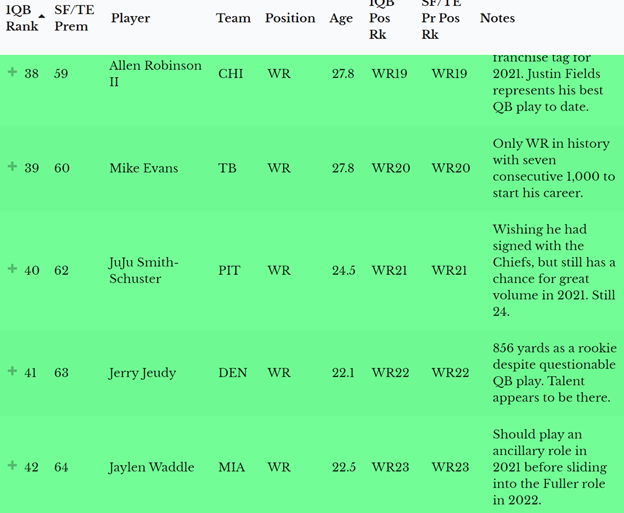 We have this group of wideouts fairly close. Certainly, a deal of, say, Mike Evans for Jaylen Waddle looks relatively fair on paper. But teams that are competing would almost certainly prefer Evans, while rebuilding teams would want Waddle. It is important to fit the players you are offering to the team you are trading with.

These differences can be even more pronounced in-season. Teams who are out of contention will be looking to jettison players who are older, seeing increased playing time due to injury, or generally are not expected to be long-term producers. In turn, those teams will likely be willing to sell for younger assets, even if they are less proven or lower-pedigreed. And the opposite is true for contenders.

By considering team goals, you are more likely to find optically fair deals that are valuable to you.

Cold offers are fine to start a negotiation, but there should be some more communication past that if things don’t work out. If you know the people you are trading with, this is typically easier, but even just including comments in the trade replies is going to help facilitate a deal — or determine more quickly that there is not one to be made.

This is a bit of a corollary to considering team goals, because sometimes those are not abundantly clear. Only a handful of teams in your league are likely to be obviously competing or rebuilding. The rest could go either way. You could directly ask your potential trading partner where he/she would like to go with the team, or simply inquire if they are interested in dealing the player you covet, and who on your roster would interest them.

Communication can go a long way towards not only finding better trades, but having a better understanding of your league-mates. Likewise, they will understand you better. With dynasty values fluctuating greatly from person to person, sometimes cold offers can come off as potential ripoff attempts. Being able to converse about offers, reasoning, and the like helps to avoid that kind of friction.

One thing to avoid while communicating is trying to “sell” potential trading partners on why they should make a deal. Typically these conversations go awry because they go overboard on the “benefits” without discussing why the deal is good for you also. It is especially poor form to denigrate the player you are attempting to deal for while doing this (e.g. “Will Fuller is injury prone”). If you are offering a trade for a player, you clearly have an interest in him. Trying to make it out like your trade partner is getting a steal is disingenuous, and most people see right through that.

Use the Trade Block

A good way to fast-track some communication is to utilize the trade block (“trade bait” on My Fantasy League). Again, we should set clear expectations here. Try to include a note as to what you are looking to acquire in return, or even more generally, what kinds of moves you are looking to make. Here is an example of my trade block in one of my dynasty leagues.

This is a Superflex TE premium best ball league with deep rosters (30, start 10). I am currently carrying six TEs — probably too many — with varying levels of both short- and long-term expectations. I am clearly expressing my desire to consolidate at the position. Even if I have to take a slight loss on a deal, it may be beneficial just to open up more roster slots for RBs and WRs.

Try to post players people may have an interest in on your block. Trade block spammers — people who just put all of their junk on the block — are not going to typically receive offers. And not only will this leave a bad taste in your league-mates’ mouths, they may also miss the players of actual value within your crowded block.

There are many different theories on how to best utilize the trade block, but I think you should really only put players on there you are willing to deal at or below market value. Throwing the latest Twitter sensation on your trade block and then requesting $1.25 on the dollar when folks inquire is a quick way to get your league-mates annoyed at you.

A quick aside: I’ve mentioned a few times how trade habits can impact not only your fantasy team, but how the rest of the league feels about you. This is of great importance to me in dynasty. One of the worst things that can happen in leagues is for people to simply not want to deal with you. This can sometimes happen serendipitously — if you win a few trades in a row, folks may naturally become leerier to deal with you — but most people typically get over that. If your league-mates feel you are constantly trying to get one over on them, or simply find you annoying, you will have a lot more difficulty making good deals, and it will hamper your ability to build out your roster.

Haggling for small additions in trades can add up over time — one of those late-round picks or fliers you ask for as throw-ins are bound to pop eventually — but I advise against doing this when you’ve already received a fair offer that you would be willing to accept. Having a reputation of being easy to trade with is valuable, but so is securing a good deal before potential partners can change their minds or get cold feet.

An example of this from one of my leagues occurred recently. I posted on my trade block that I was looking to move Aaron Rodgers in a deal for a different QB (you can see why in our dynasty change log). ETR’s Michael Leone sent me an offer of Kirk Cousins for Rodgers straight up. He is deep at QB, but could use a little more star-power, while I was looking to get off of some of the Rodgers risk (this team also has Deshaun Watson). Sure, I could have tried to haggle a little with Leone to get a better deal (he loves when I do that), but this was a fair offer that accomplished exactly what I was trying to do, so I immediately accepted.

The hidden benefit here is that the more times you do this, the more likely you are to get fair trade offers in future negotiations — or have someone accept an offer of yours.