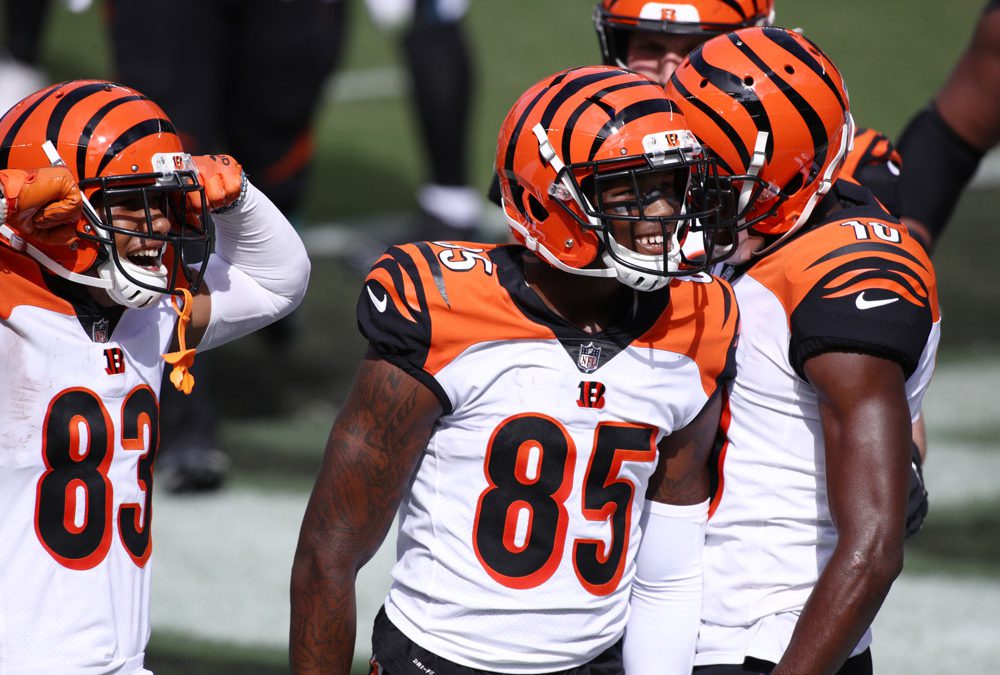 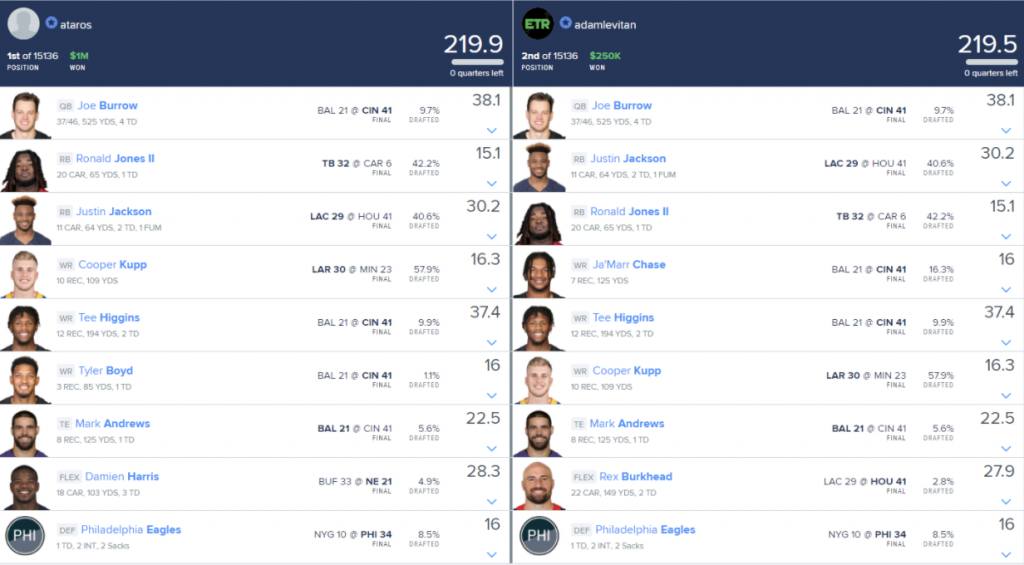 Adam Levitan was able to take down second place in this contest for a massive 250K payday. The lineup consisted of a Joe Burrow double with Tee Higgins and Ja’Marr Chase, and Mark Andrews as the bring-back. On a day with many elite value plays, this stack was more moderately owned and hit the absolute ceiling outcome for Burrow and Higgins. The Andrews bring-back was the clear differentiator, providing low ownership and a massive score at a position that lacks ceiling options. Justin Jackson and Ronald Jones were two of the highest-rated players on the slate, and with the cash savings, it was easy to afford Cooper Kupp, the highest raw projected skill player on the slate. With those three being heavily utilized by the field, the key decision was to fade Alexander Mattison, the biggest value on the slate, who came in at 56%. The pivot was to Rex Burkhead, who was rated as a great value at much less ownership. This pivot allowed the lineup to gain over 13 points on more than half of the field. 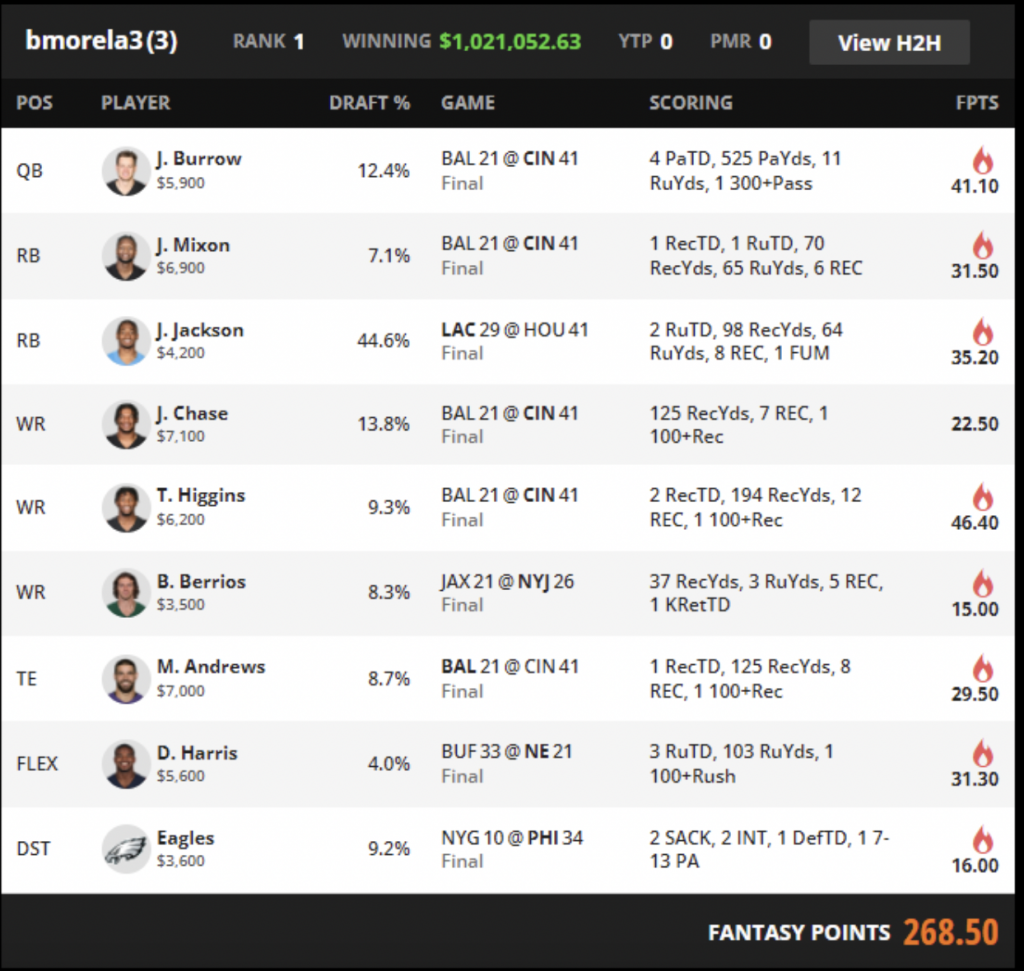 The winning lineup used a Burrow triple stack with Chase, Higgins, and also Joe Mixon. In such a large field like the DK Milly, it is often a decision whether you should double stack or not, as you generally need every player to hit the best possible outcome to win. A triple stack is even more difficult to get three ceiling games from the skill players on the same team. However, with Burrow throwing for over 500 yards and the team scoring 41 points, it was able to take down the tournament. Due to the strength of the value RB plays on the slate, Mixon and Harris were fairly low owned and are two players who have the ceiling to take down tournaments.

The total ownership for the top-scoring teams came in at 166%, 14 points higher than the field. Due to injuries and players in health and safety protocols, the slate set up with some very clear value plays that were coming with heavy ownership. Since many of the plays were truly good chalk, it meant that you were likely playing into ownership somewhere in your lineup. The key was to differentiate somewhere in the lineup to find a couple lower-owned pieces. While each piece of the Burrow stack + Andrews was owned 10% individually, the stack itself was used by less than 1%. Additionally, fading a strong RB play for another viable RB at lower ownership like Sony Michel, Rex Burkhead, or Damien Harris was how the Burrow stack was able to jump to the top of the leaderboards.

The Bengals-Ravens game had low projected ownership mostly due to the Ravens’ uncertain QB situation that dragged its total lower. Playing into that uncertainty when the field is not was a profitable decision.

Here are the results from the DraftKings $2M Mega Millionaire, which had 505 entries. 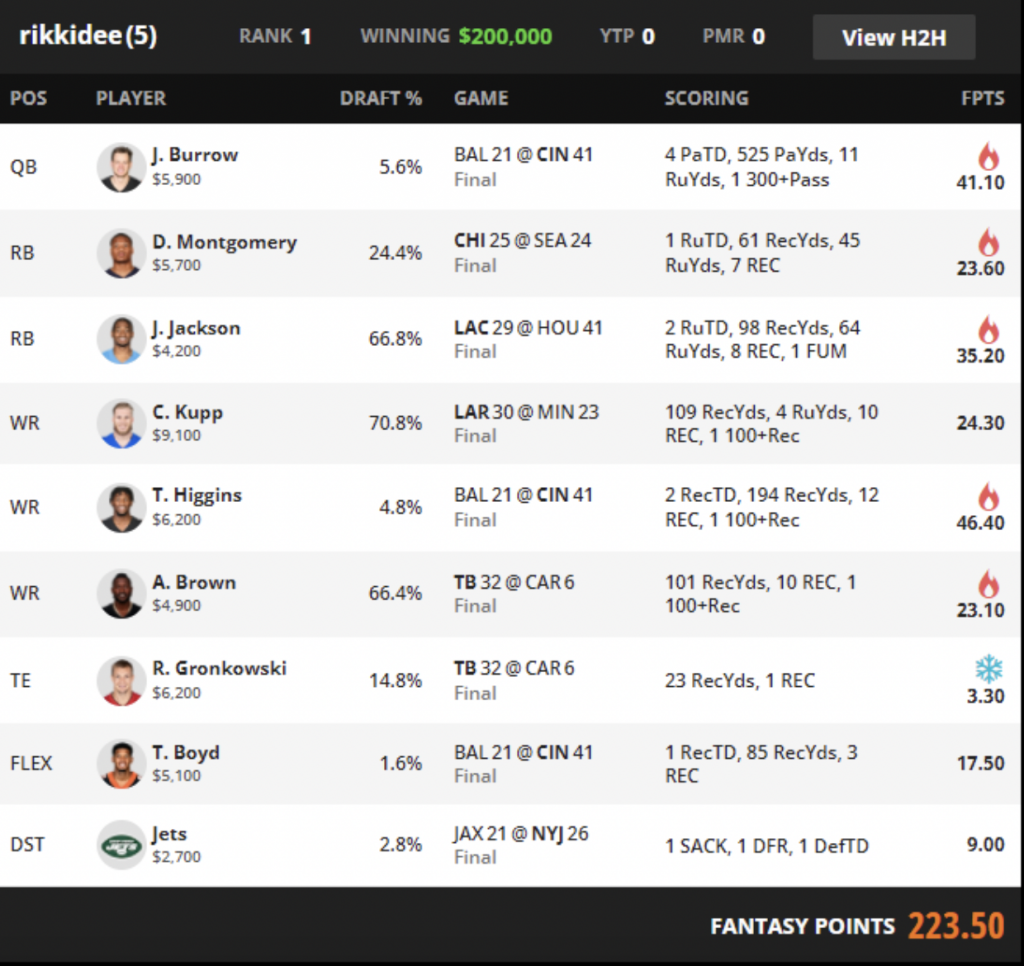 The differences between ownership in small vs large fields is clear here. The already modest ownership for the Bengals stack was cut in half in this field. In a field of 250 teams, only a few teams are also using Burrow stacks. Kupp, Jackson, and Brown were the three highest-owned players in this field, as the sharps felt these three were a cut above the other value plays on the slate.

An important note on defense: In this field, the Falcons and Bengals were owned by nearly half the field. Simply pivoting to a defense like the Jets or others helped to gain points on half the field, which can be crucial when fighting for top spots on the leaderboard.

Knowing that the top-rated plays would be massively owned in small fields, the key decision was to get onto a low-owned stack or contrarian piece to differentiate. While the Bengals were the winner on the day, on another slate, 33 points from a 5% Josh Allen with 32 points from a 3% min-priced WR could easily be the talking point on the day. The key was to take a shot on a high-upside, low-owned stack, while building around some truly elite plays.