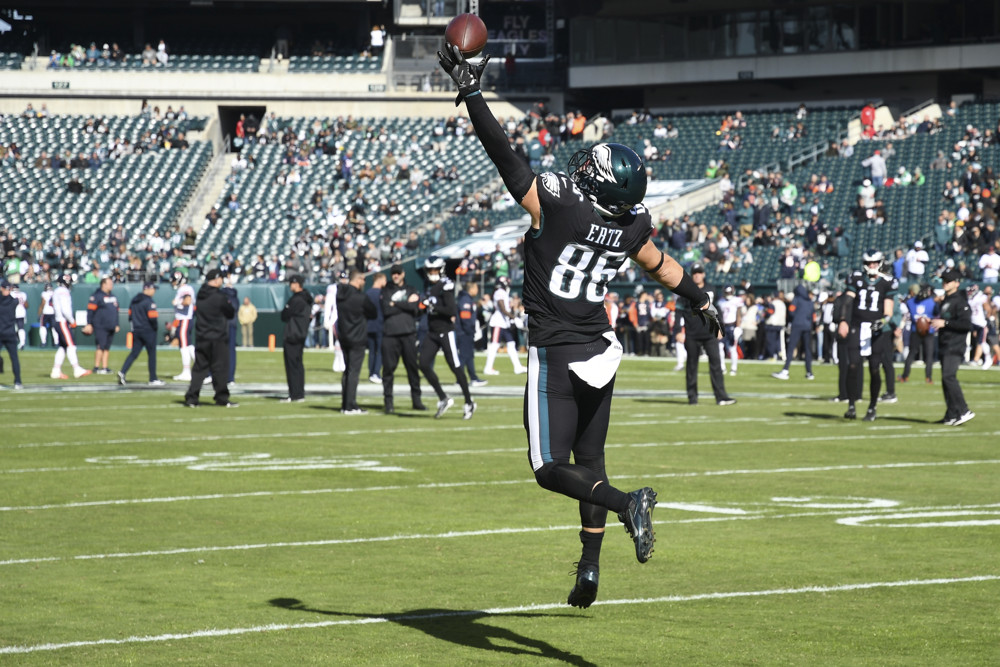 In Best Ball, simply picking the right players is not realistic strategy. We also need to consider the implications of the no-transaction format.

First, our decisions should be dynamic to positional strength. If our QB1 is Lamar Jackson, he’s very likely to be the quarterback who counts in our lineup an overwhelming majority of weeks. In that scenario, waiting until later in the draft to select our QB2 and QB3 is correct.

Second, we need to account for the quirks in FFPC’s format. Tight ends get 1.5 points per reception and we are only required to start two WRs each week. There are two FLEX spots. This is going to result in the optimal construction including more TEs than we are typically targeting and slightly fewer wideouts. For our full FFPC rankings specific to the format, click here.

In order to solve the question of positional allocation, we took a data-driven approach. We looked at the last three years results, simulating nearly 100,000 teams in search of winning roster constructions. The results:

Analysis: The data shows significantly higher win-rate and top-3 rate when taking three QBs. Taking two or four QBs is also viable, with not much difference in win rates between those. Of course, when you take your QBs and how many you take is dependent on draft capital. With a full-PPR format, taking three later-round QBs is certainly viable.

For example, Matthew Stafford, Ben Roethlisberger and Teddy Bridgewater is a fine trio. If our QB1 ends up in from Tier 2, we can wait even longer on our QB2 and QB3. We would not want to draft Lamar Jackson early and then also take Deshaun Watson – unless we were going with a 2-QB construction. But in reality, the ADPs of those players relative to value makes that Lamar/Deshaun construction untenable. The 4-QB builds should mostly be saved for all late-round options.

In terms of optimal capital allocation, the data shows that taking a QB in the first five rounds is very clearly negative-EV. There’s just too much opportunity cost in a single-QB format.

Analysis: The data shows that too many people are using 8-RB constructions, where the win- and cash-rates fall off. The rates for 5-, 6-, and 7-RB constructions are very close, with a slight edge to fewer. Although the sample size on 5-RB constructions is smallest, it does have the best rates.

Again, it’s important to track draft capital used when deciding how many RBs to take. Teams that start Christian McCaffrey, Aaron Jones, James Conner in the first three rounds can lean toward the 5-RB builds. Also keep in mind the double-FLEX nature of FFPC – it’s possible to start four RBs in a week.

Overall, we’d note that teams which invested in RBs early fared the best in our simulations. That also allows them to expand the number of wideouts they take toward the 7-8 range, as discussed below.

What’s tricky here is the outrageous depth at the wideout position this season. Guys like Tyler Lockett, Will Fuller, Michael Gallup and Jarvis Landry can all be had in the fifth round or later. We are going to be tempted to take a ton of WRs as they will look like the best values. So while the data shows 8 WRs is viable in this format, letting our opponents build 8-, 9-, and 10-WR rosters will give us an edge.

Analysis: This format awards 1.5 points for a tight end reception and also allows us to start three tight ends through the double-flex. You’ll see this reflected in our FFPC-specific rankings. So whereas in other formats we can get away with just two tight ends, we definitely want at least three in this format.

One thing I’d note about this year’s tight end class for fantasy is it’s deeper than usual. I actually like the Mike Gesicki, Hayden Hurst, Noah Fant, TJ Hockenson, Dallas Goedert, Blake Jarwin, Chris Herndon, Ian Thomas types. So if building a portfolio, this format is one where we can get a lot of pieces in this tier.

Analysis: Defenses generate spike weeks through touchdowns and forcing turnovers, which are largely fluky events. So taking just one defense (even though we know they’ll play 16 games) isn’t a viable option. And with 28-player rosters available to us, taking just two defenses is a negative-EV options as well.

The data shows that win rates and cash rates are very similar for three vs. four D/STs. We’d lean toward just three defenses, ideally with three different bye weeks. Be aware of D/ST ADP, as you can see here. They will go in the teen rounds.

Analysis: If drafting early (June, July) we’d lean toward taking three kickers. There is a ton of volatility right now in terms of job security. But there’s also value in actually getting at least one rock-solid kicker. It allows us to end up with just two kickers on our roster. Again, the teen rounds is where the kicker run will happen and we need to be aware.

CONCLUSION
If looking for the quick and dirty construction, our simulations suggest the following: 3 QB – 6 RB – 8 WR – 3 TE – 3 DF – 3 K. That leaves us with two spots that can go anywhere. However, as I’ve tried to emphasize throughout this article, understanding your draft capital allocation is a key to allocating positions properly.