When Is The Best Time To Draft Best Ball Tournament Teams? 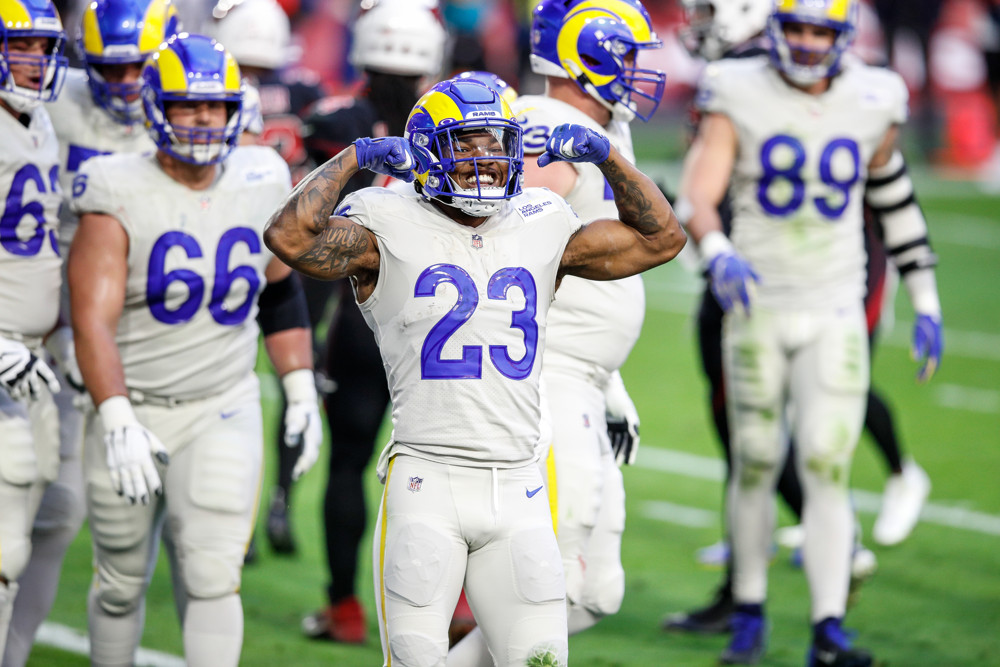 A personal admission that could double as a cry for help: I have already drafted a few teams in The Big Board, Underdog Fantasy‘s pre-NFL Draft best ball tournament. It’s been less than two weeks since Super Bowl LVI, and numerous fantasy content websites have already published rankings and articles for 2022 (we already have rankings up for Underdog and FFPC!).

I’ve been drafting already partly because I’m a degenerate, but there’s also a sound argument to be made that early drafters gain a massive edge over the field if they can identify players whose price will rise throughout the offseason. Even in The Big Board, which closes on draft night, ADP will change notably over the next two months. You don’t have to think about this type of thing in normal 12-team leagues when everyone is drafting at the same time, but best ball tournaments pit teams drafted on opening night against those chosen four months earlier. Case in point: In the first Underdog Best Ball Mania II draft last year — on May 3, mere days after the NFL Draft concluded — Kyle Pitts was selected 80th overall. In the second draft later that same day, he went 68th.

His final ADP on September 10 was 39.7. Roughly three rounds of ADP closing line value. And Pitts was just one player among dozens whose ADP shifted dramatically between May and September.

The popularity of best ball — and, really, fantasy football as a whole — is at an all-time high, leading to more nuanced analysis about the finer points of the game beyond player-level analysis. Arguments about stacking, optimizing teams for the tournament stage, and positional allocation dominate the streets of fantasy Twitter. Those are all debates that affect how you pick your team once you’ve already entered a draft.

But let’s back up a bit. Because before you even get to that part, you first have to consider when it’s most optimal to draft best ball tournament teams.

The argument for drafting early is clear: There’s an enormous edge to be gained if you can pick which players will rise as the summer progresses. There are values available in May that will be long gone by August or September.

On the other hand, late drafters have the information edge. Many of the questions facing May drafters will be answered by training camp beat reports or preseason action. Furthermore, late drafters are less at risk of getting bitten by the injury bug before the season even begins (just ask anyone who spent an early-round pick on Cam Akers last spring). Finally, late drafts may have more casual players who barely paid attention to football all summer before deciding to hop into a draft right before the season kicks off. That last effect is magnified on softer platforms like DraftKings, whereas anecdotally Underdog has a more niche audience of hardcore players.

DIGGING INTO THE DATA

Before we get to the results, let’s first talk about what data we’re using for this exercise. The team over at Underdog graciously made pick-by-pick data for Best Ball Mania II publicly available. The caveat here is that we don’t have anything on drafts before May — so we’ve got a few months before this is completely useful — plus it’s only a one-year sample. Thankfully, RotoViz’s Michael Dubner has investigated this in the past using Fanball/BestBall10 data. He found that late drafters scored better on average, and — more importantly for large-field tournaments in which we’re chasing extreme upper-percentile outcomes — they finished in the top two percent of all teams at a higher rate. Interestingly, he also discovered the edge in drafting late had declined in recent years. Dubner’s research provides a great comparison point for our Underdog data, which is probably a more applicable source now that BestBall10s have somewhat fallen by the wayside.

Like Dubner, I found that scores generally increased throughout the offseason. BBM2 teams drafted in September had a median score roughly 25 points higher than those drafted in May. September playoff teams — only teams that finished first or second in their league — were about 20 points better.

However, we’re chasing extreme outcomes in these huge best ball tournaments with such top-heavy payout structures. With that in mind, let’s group by month and look at scores that placed in the 90th, 95th, and 99th percentiles.

The teams drafted in later months still performed better even at extremely high percentiles. From May through August, the difference in scores was fairly minor. The median advancing team in August was eight points ahead of its May counterpart, while the discrepancy at the 99th percentile was just six. However, scores really jumped last September. It remains to be seen whether that holds in a sample larger than one year — Dubner’s research didn’t find as much of a spike from August to September — but this is at least worth keeping an eye on for the moment. And however small the difference was from May until August, we’re still hunting for any edge we can find, and scores did increase, albeit slightly, even before September. 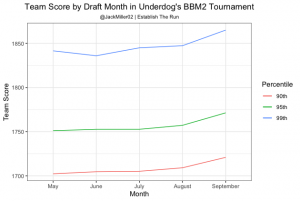 If we split the data into two groups — May through July and August through September — and make a density plot, we do see that the earlier bucket has a wider distribution. Despite that, the August and September group still has an ever-so-slight (so slight it’s hard to see, which makes sense considering it’s only about 10 points on an x-axis that spans hundreds of point totals) advantage at very high percentiles. But the big difference is on the left side of the plot, where there’s a clear sliver of red indicating that teams drafted earlier hit low-percentile outcomes at a higher rate. So yes, there is a wider distribution of scores for teams drafted earlier, but later-drafted teams still had better upper-percentile outcomes than their early-drafted opponents.

HOW TO PLAY IT

In essence, BBM2 teams drafted later last summer performed better than those drafted earlier at all percentiles. This is based on just a one-year sample, although it’s worth noting the RotoViz research had similar findings for BestBall10 leagues.

This doesn’t definitively mean that drafting later is optimal. Maybe the edge in drafting early only really shows up at the extremely good outcomes — I’m talking like 99.9th percentile (although I will add that, in order, September, August, and July had the three highest 99.9th-percentile scores in 2021. Also, the five highest-scoring teams and 16 of the top 17 were drafted in August or September). Anyone who has drafted early can tell you how inefficient ADP is compared to the end of the summer, and it’s hard to discount that with only one year of data.

With that being said, there are also solid arguments in favor of drafting late, namely the information edge relative to early drafters as well as softer opponents and fewer games lost due to injury. It’s also very possible we’re overconfident in our ability to pinpoint ADP values months in advance, especially when so much unpredictable stuff happens in the football-verse during the offseason. Mining value in early leagues is a skill, but it may not be as consistent and dependable as we think. Maybe for every player we draft who rises five rounds in ADP, we draft another player whose value falls during the summer (whether that be due to injury, unpredictably poor beat reports, or simply a misevaluation on our end).

The data is clear: Later-drafted teams scored better last year. But do keep in mind we only have data for May onward. The level of actionability is up for debate, although there are certainly reasons to believe this trend repeats in 2022. If you’re thinking about drafting right now (February 2022), we don’t see any issues playing Underdog‘s The Big Board tournament that looks likely to fill ahead of the Free Agent period, when we’ll get more information about where players are playing next year. In general, if you have the choice to draft before or after a big window of news, we think it makes sense to wait to draft. In the meantime, happy drafting!