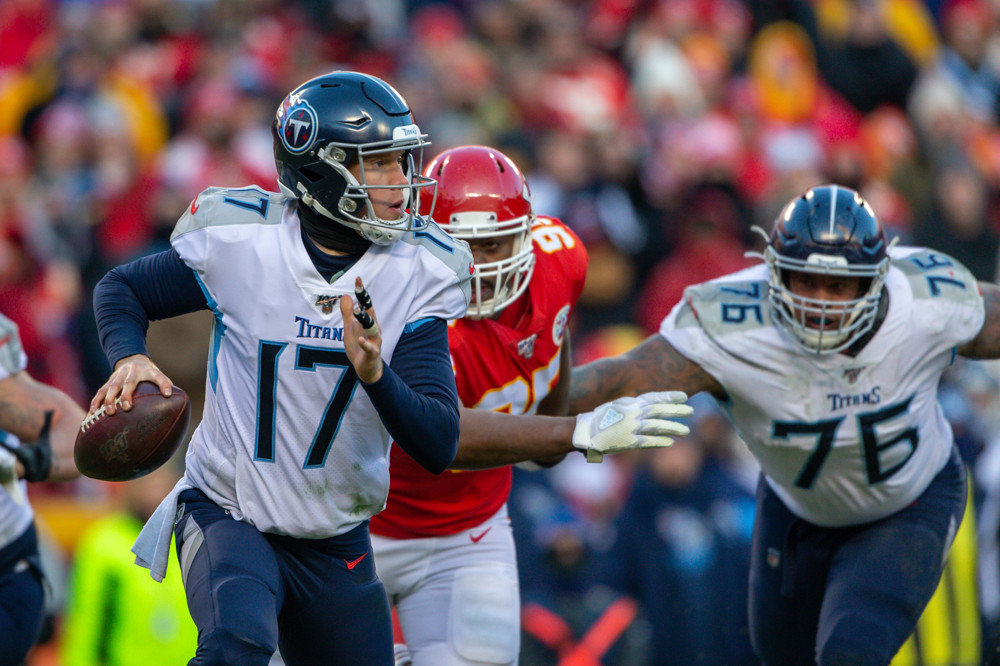 Each week in this space, we’ll look at how ADP has changed over the past week in the industry. This week we’ve added data from the NFFC Online Championship and Underdog along with the FFPC FBG Championship. For FFPC and NFFC, we’re comparing ADP from the last 14 days to the previous 14-day period. As sample sizes increase on drafts and we move closer to the season, we’ll cut that 14-day period down to seven days. Please note the NFFC sample sizes are particularly small right now (less than 10 for each 14-day period). For Underdog ADP comparison, they have their own ADP formula. We’re comparing their stated ADP seven days ago to their current stated ADP. For undrafted players, we used an ADP of 250 for FFPC and NFFC leagues and an ADP of 220 for Underdog leagues. 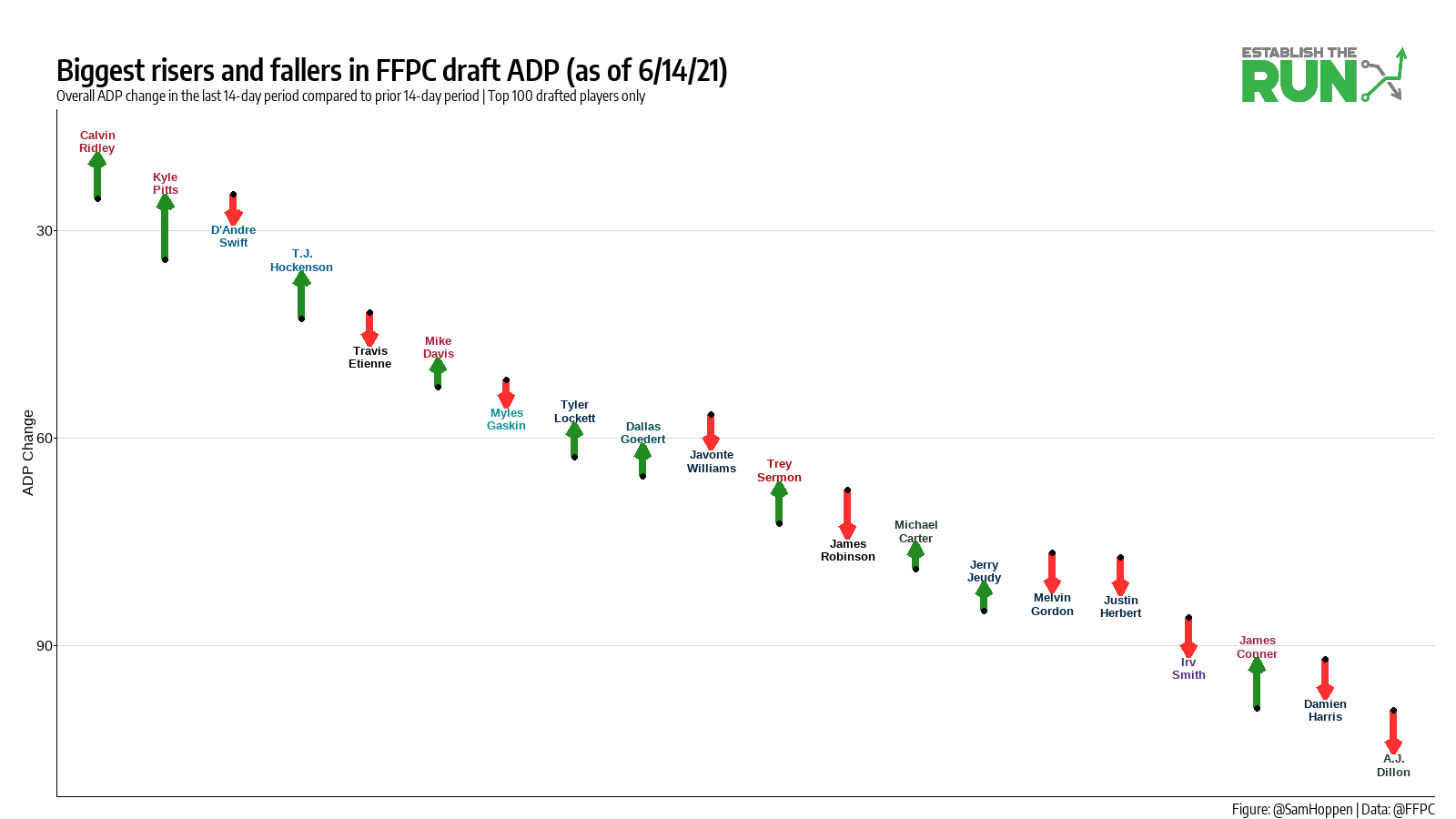 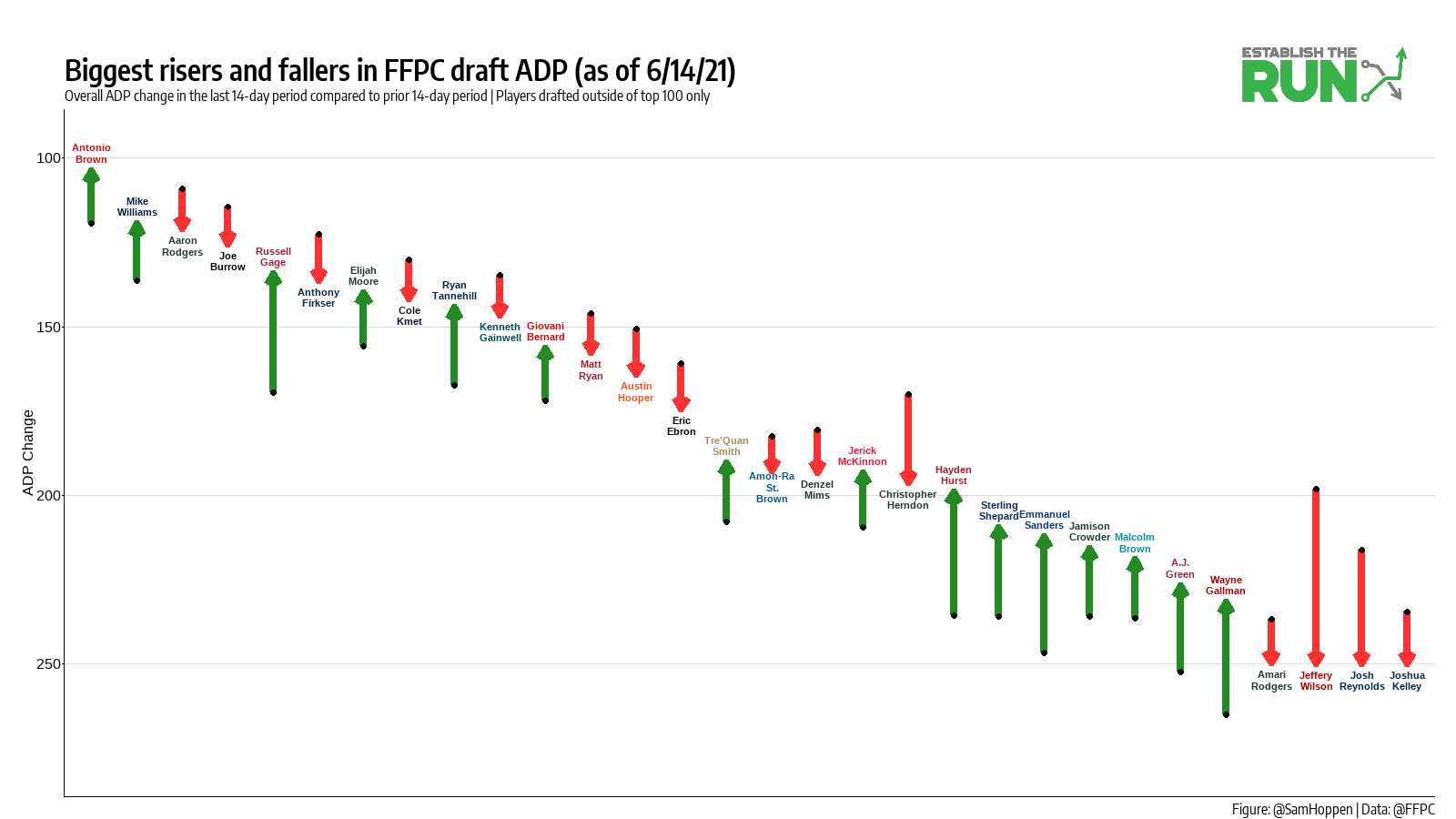 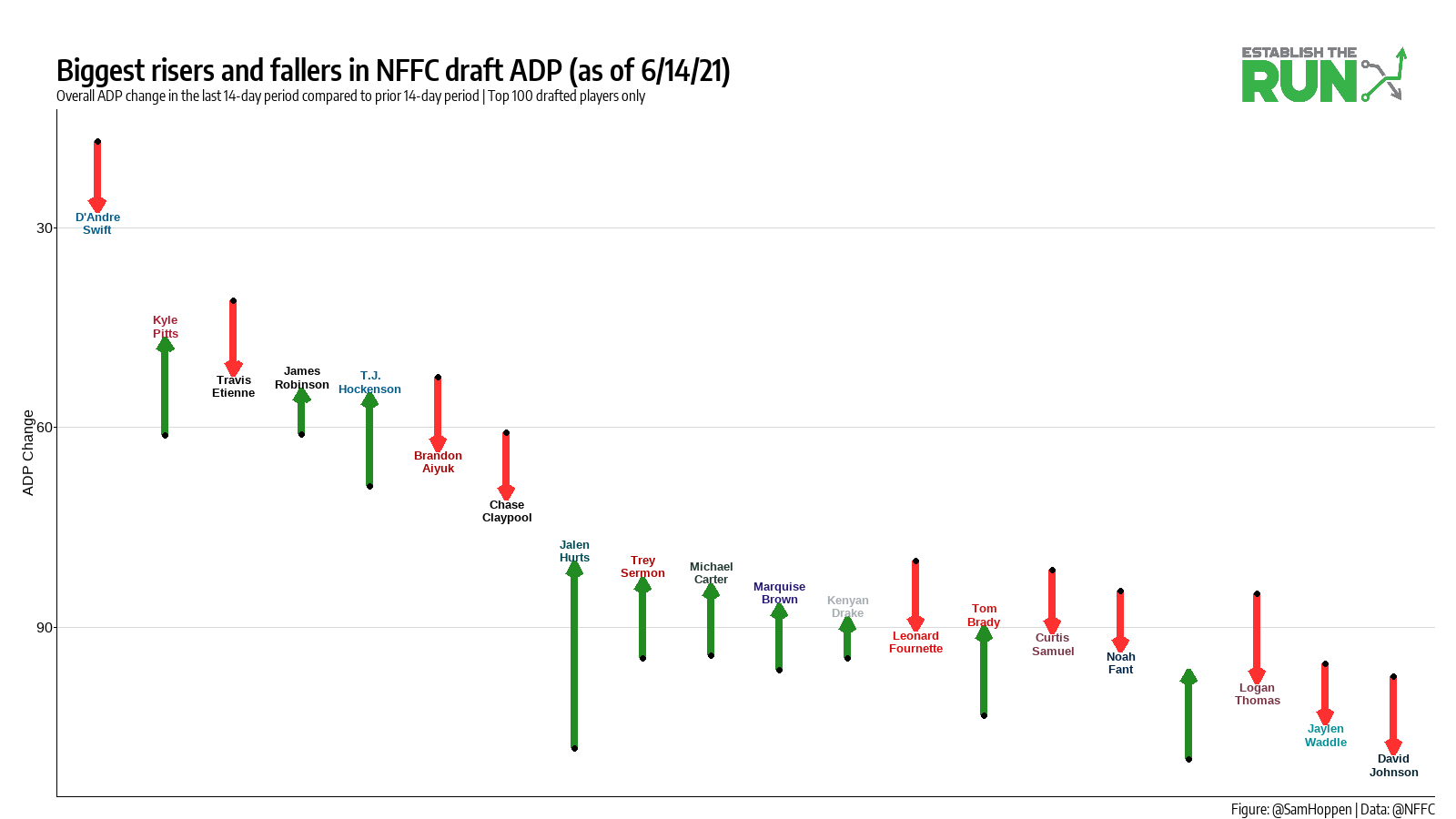 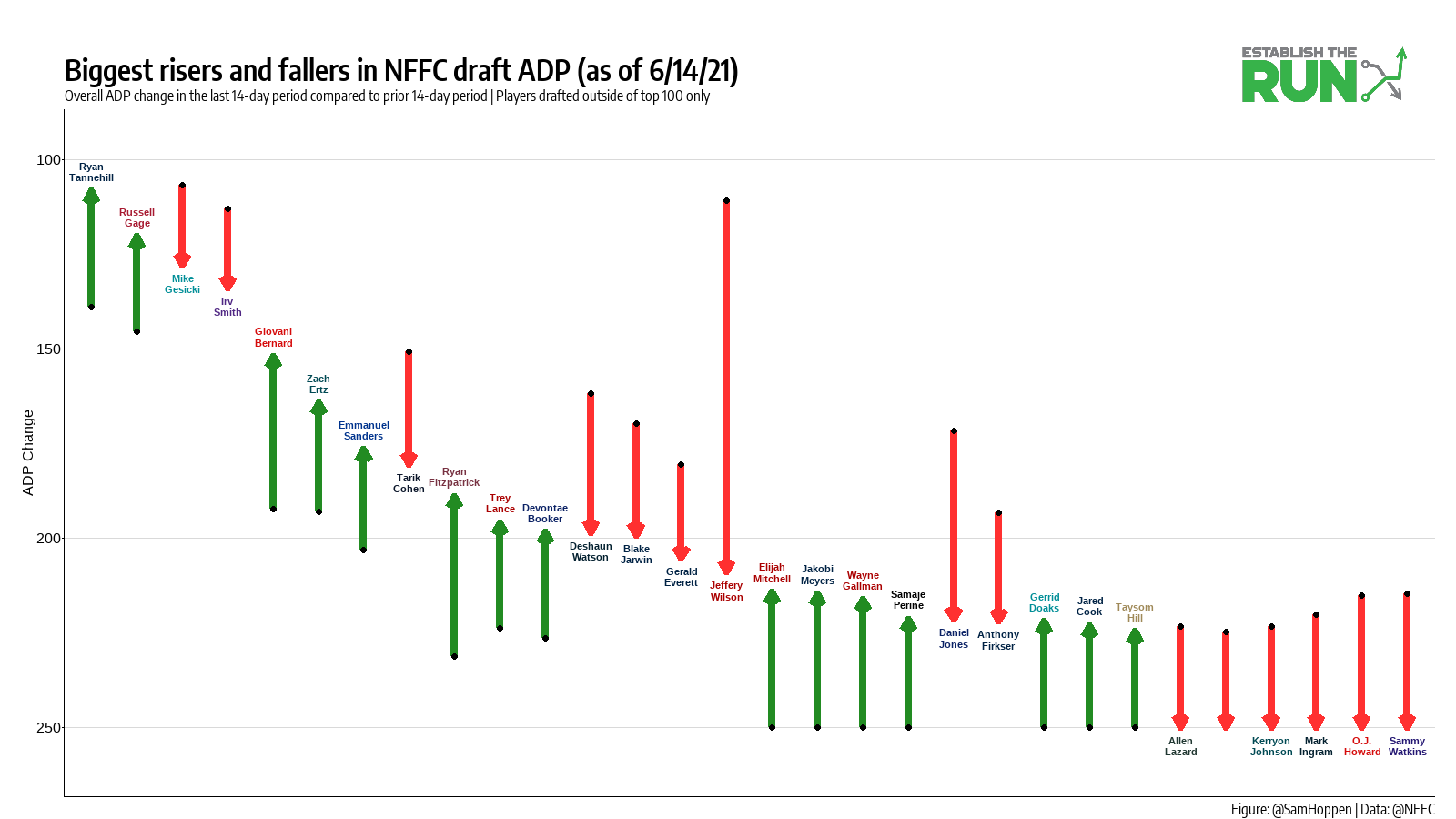 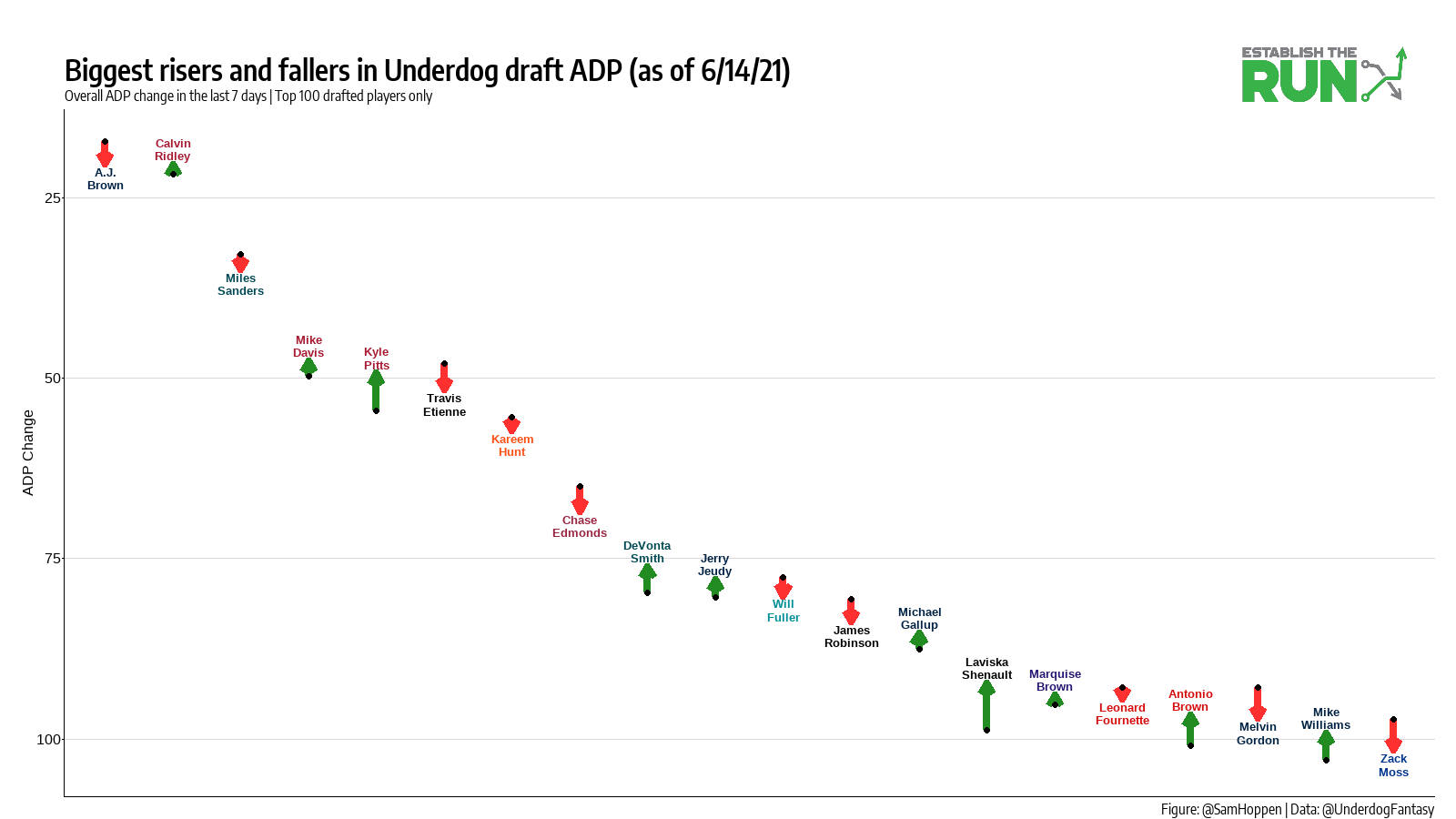 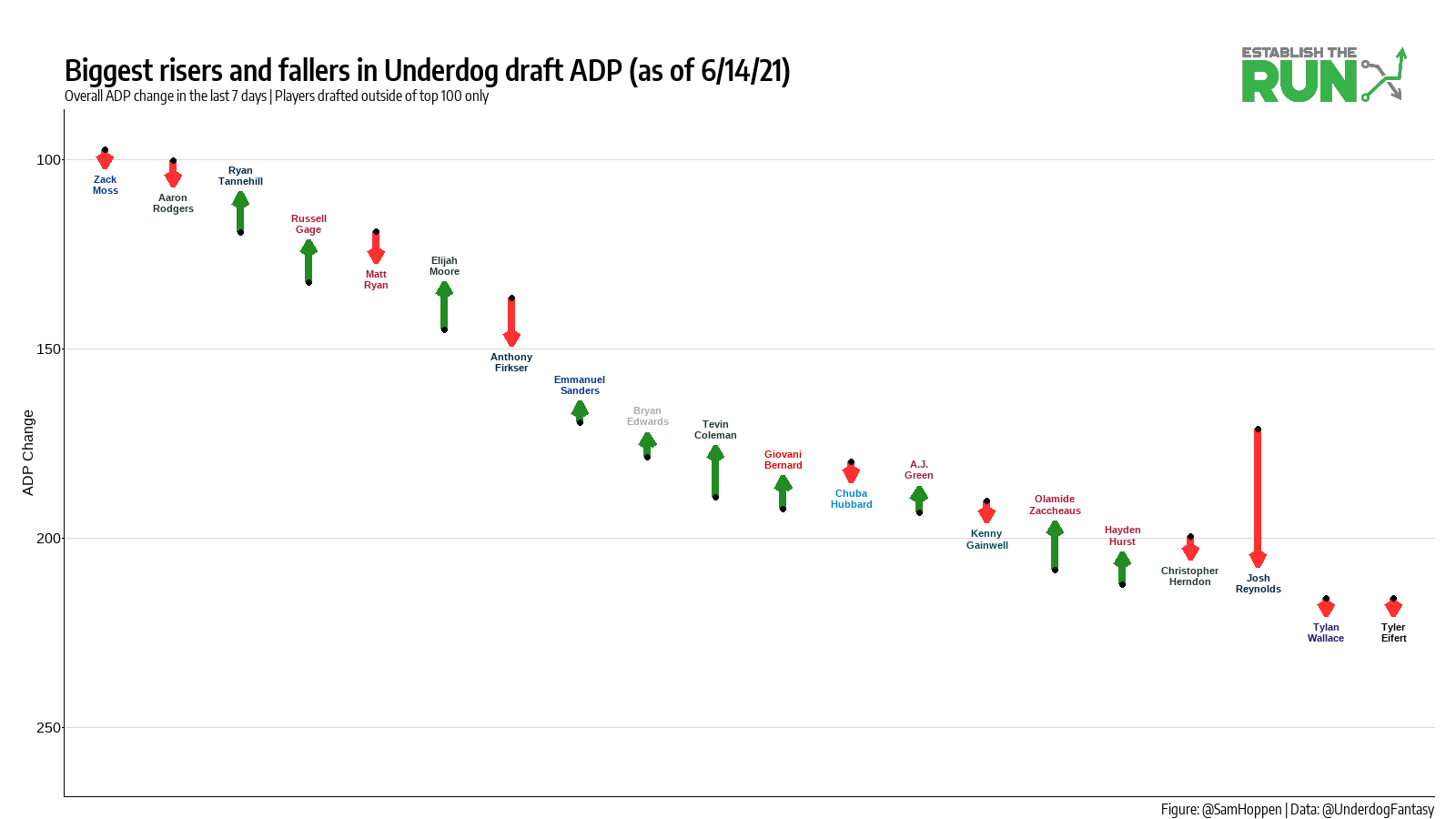 Kyle Pitts continues to see his ADP rise, now going at the 2-3 turn in FFPC drafts (TE Premium) and the 4-5 turn in NFFC and Underdog. It’s a rich cost. The tag is most appealing on Underdog where he can get there on efficiency and provides a more meaningful structural edge. Laviska Shenault is the highest riser on Underdog with a Top-100 ADP. Good camp reports have washed out some concern Shenault drafters had immediately post draft given how Urban Meyer stated Travis Etienne would be used. We view him as a breakeven pick now after presenting him as a good selection in last week’s market report when his ADP had dipped. A few names appear on both the NFFC and FFPC risers list: T.J. Hockenson, Trey Sermon, and James Conner. Positionally, we agree that Hockenson is TE6. There’s a ton of volume upside for Hockenson, but the opportunity cost is really high where he’s currently going (third round FFPC, fifth round NFFC). We’d rather pay up for a more premium TE or play the waiting game at the position. Sermon’s FFPC ADP has gotten a little bit out of control (sixth round) given full PPR scoring, but he’s a good option at the 7-8 turn on NFFC currently. Even with his recent rise in price tag, we think James Conner is an excellent RB option after pounding WRs in the RB dead zone.

We’re seeing some RB dead zone guys fall across all three formats, particularly Travis Etienne, James Robinson, and D’Andre Swift. In Jacksonville, we’d rather take Etienne, who has more big-play upside and can make a material difference in the passing game. Rookie RBs have historically presented some of the biggest ADP-adjusted upside in fantasy drafts, though we’d still prefer exposure to come here at the 5-6 turn or later. We talked about Robinson and Swift in this space last week and not much has changed.

We’re still seeing Julio Jones to TEN fallout outside of the Top 100 picks. Josh Reynolds’ ADP has plummeted with the addition of Julio Jones. There’s no surprise here as Reynolds’ value was completely dependent on the lack of target competition in front of him on the depth chart. He’s still worth selecting at the back end of drafts given his role as WR3 in an expected efficient offense plus some contingent value if either Julio Jones or A.J. Brown is hurt in front of him, opening up a larger target share. Meanwhile, the ADPs of the Atlanta secondary pieces are all up, including Russell Gage, Olamide Zaccheaus, and Hayden Hurst, who Evan Silva has noted could see the field quite a bit in 2-TE sets now. On the TEN side, Ryan Tannehill‘s ADP shot up as we suspected last week. He cracks the top risers list in all three formats we looked at.

ATL-TEN implications aside, some of our favorite Zero RB targets late in the draft are starting to gain some steam, including Tevin Coleman, Giovani Bernard, and Jerick McKinnon. Jack Miller hit on both Coleman and Bernard in his late-round RB upside piece. Outside of RB, Antonio Brown is starting to garner steam across the industry. Brown was a topic on GOAT human (Silva) against GOAT machine (Leone) in a recent ETR podcast episode that also discussed the ATL-TEN trade fallout.

Counter to the rise in T.J. Hockenson ADP, we’re seeing a lot of cheap end-game TEs get even in cheaper, including Anthony Firkser, Gerald Everett, and Chris Herndon. Firkser’s value likely didn’t change much in the Julio trade. Perhaps it got even better. He was never going to be a target hog and now should have more routes to achieving value via efficiency. We think the market has overreacted here in terms of his positional ranking. Everett and Herndon are dart throws but dart throws with a smidge of upside. With ADP rising on premium TEs, they become more appealing as dirt cheap end-of-draft TE punts.

What’s on the horizon?

The market jumped on Elijah Moore this past week with speculation that Jamison Crowder could be gone. Now that Crowder has agreed to restructure his contract, ensuring he spends the season in N.Y., the market may back off Moore a little bit. In our opinion, the presence of Crowder isn’t ideal but is also a bit of a red herring. Those base targets hurt Moore’s floor but probably do nothing to block a potential breakout. As a result, a buying opportunity may present itself over the next couple of weeks.