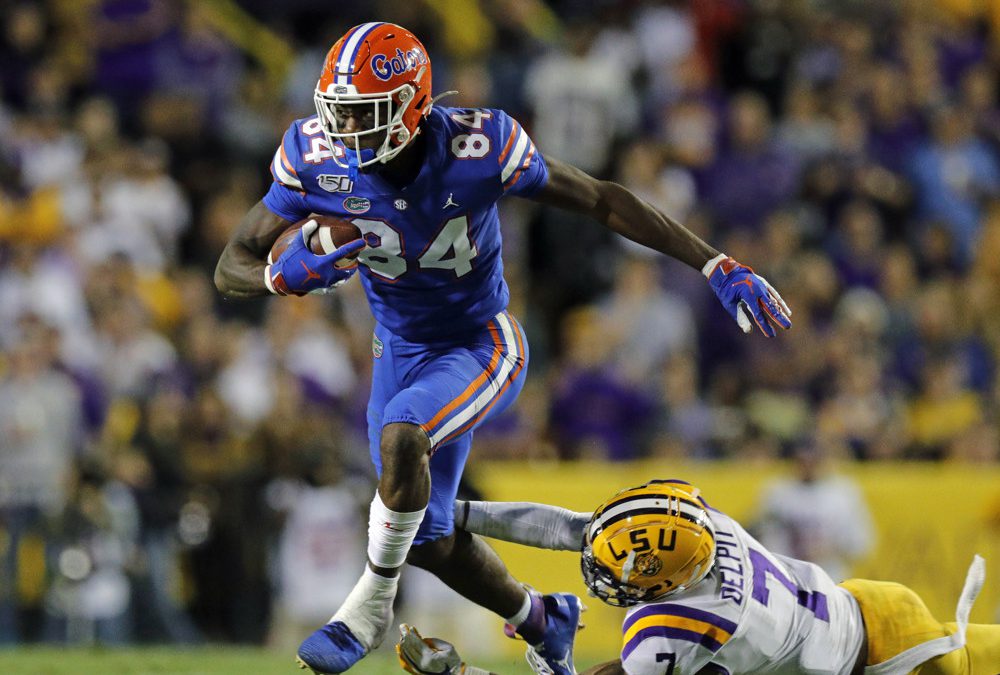 Each week in this space, we’ll look at how ADP has changed over the past week in the industry. This week we’re looking at data from the FFPC FBG Championship, comparing ADP from the last 14 days to the previous 14-day period. As sample sizes increase on drafts and we move closer to the season, we’ll cut that 14-day period down to seven days. Look for us to add Underdog in this space next week and NFFC once enough data is compiled in their Online Championship. 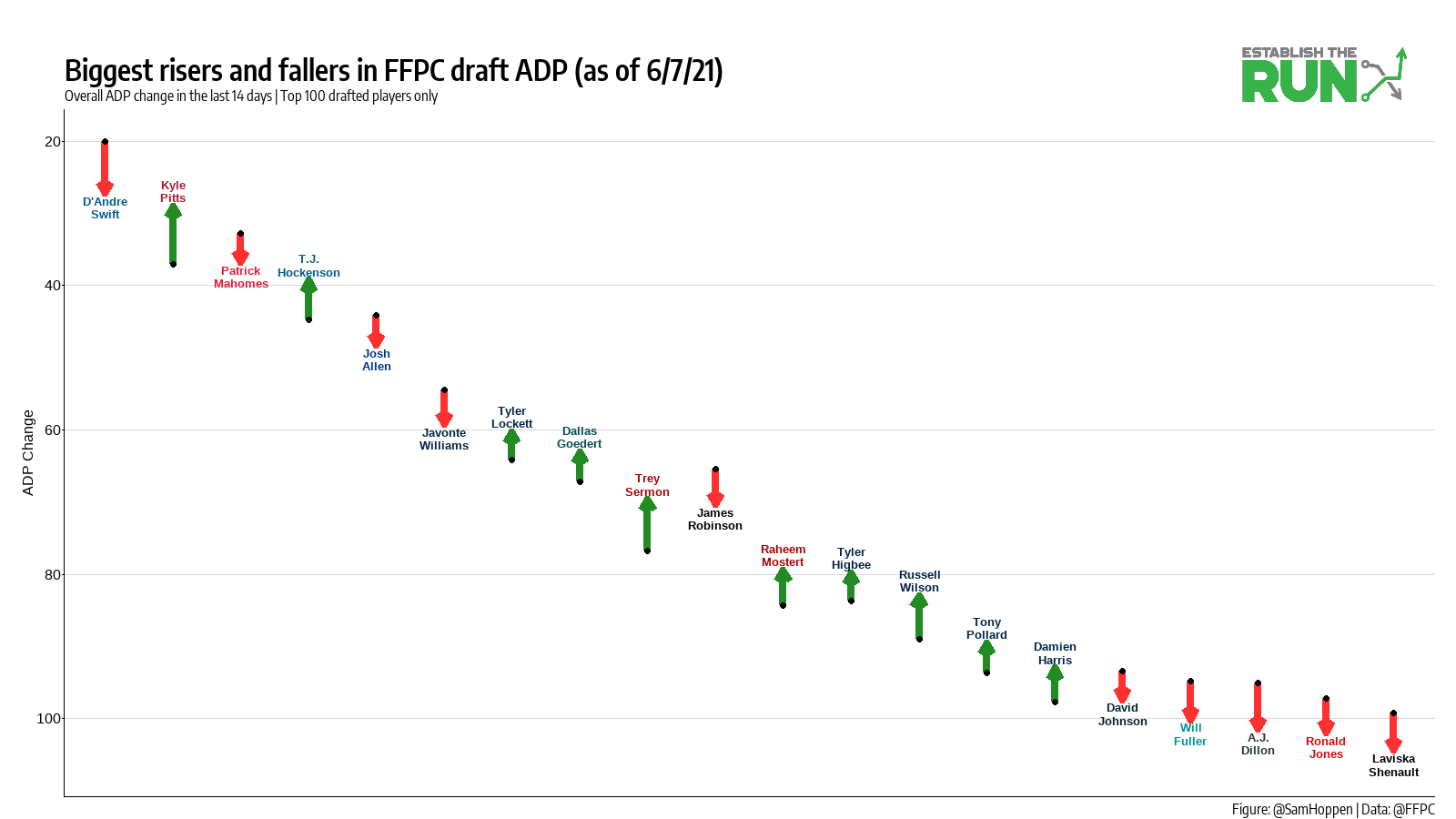 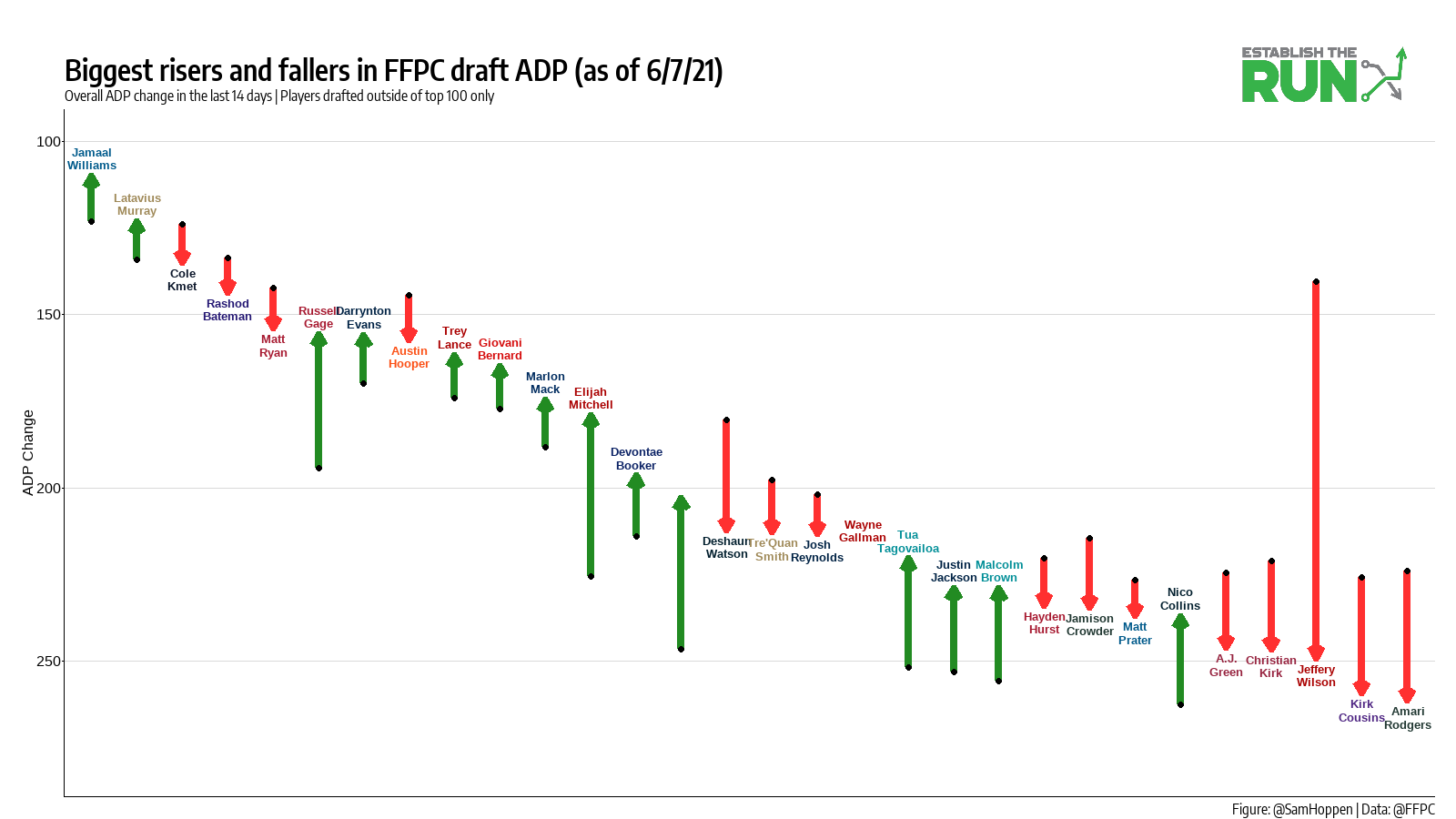 Sharp FFPC drafters reacted to the Julio Jones trade rumors prior to the actual trade, as Kyle Pitts and Russell Gage saw big jumps in their ADP. Evan Silva agrees, ranking Pitts as his TE4 while sliding Gage into his Top 150. Gage’s upside might be capped, but he has a strong PPR floor in a pass-heavy offense with little WR competition behind Ridley. Pitts looks to break the historical rookie TE production struggles. We think he does given a combination of elite talent, unprecedented draft capital for the position, and an ideal landing spot — a pass happy offense with a capable QB, protection from Ridley, and limited secondary target competition.

Drafters also reacted to the Jeff Wilson injury, jumping on the chance to grab pieces of the San Francisco backfield. Trey Sermon, Raheem Mostert, Elijah Mitchell, and Wayne Gallman all make appearances as ADP risers. This offense has been ripe for RB efficiency the past couple of seasons, and that should only continue with the addition of a mobile QB in Trey Lance, especially if the offense takes a leap with improved QB play. Our staff rankings specific to this contest think the Mostert and Sermon ADPs are roughly correct positionally, and Silva’s Top 150 shows even more love for Sermon. Mitchell doesn’t pop in our rankings but is a logical end-of-draft dart though in redraft formats. If he’s able to crack the roster, there’s a ton of upside for the highly athletic Mitchell.

People are starting to get concerned about D’Andre Swift given Anthony Lynn‘s comments about Jamaal Williams, which Evan and Adam Levitan discussed on a recent podcast. We think the fall is warranted, but if it continues, there may be a nice buying opportunity on Swift at the end of the third round or even the fourth round.

The impact of the Travis Etienne draft selection has led to falling ADPs for Laviska Shenault and James Robinson. Shenault is a good selection at WR43, but the Robinson ADP hasn’t dipped enough in our eyes. The upside seems limited given the lack of draft capital investment, reliance on bulk touches for value, and the incoming competition of both Etienne and Carlos Hyde.

Outside of the Top 100, Tua Tagovailoa has seen a big spike in ADP. Tua is a smart gamble if employing a late-round QB strategy. His disappointing rookie season may be a bit of a red herring. With full health, a full offseason, and continued offensive investment (signing Will Fuller, drafting Jaylen Waddle), this could turn out a lot better than people expect.

What’s on the horizon?

Ryan Tannehill jumped a bunch in Silva’s Top 150 update following the Julio Jones to TEN trade. Our staff rankings have him as the QB12 on FFPC, but his ADP is QB17. Look for that to rise immediately. Conversely, we might see a small dip in A.J. Brown‘s ADP. He was the WR3 as of today, but we think he belongs in the WR4-6 range. Brown’s floor may be even steadier with an offense that should be highly efficient once again, but some of the crazy target potential outcomes are likely off the table with the Julio addition.