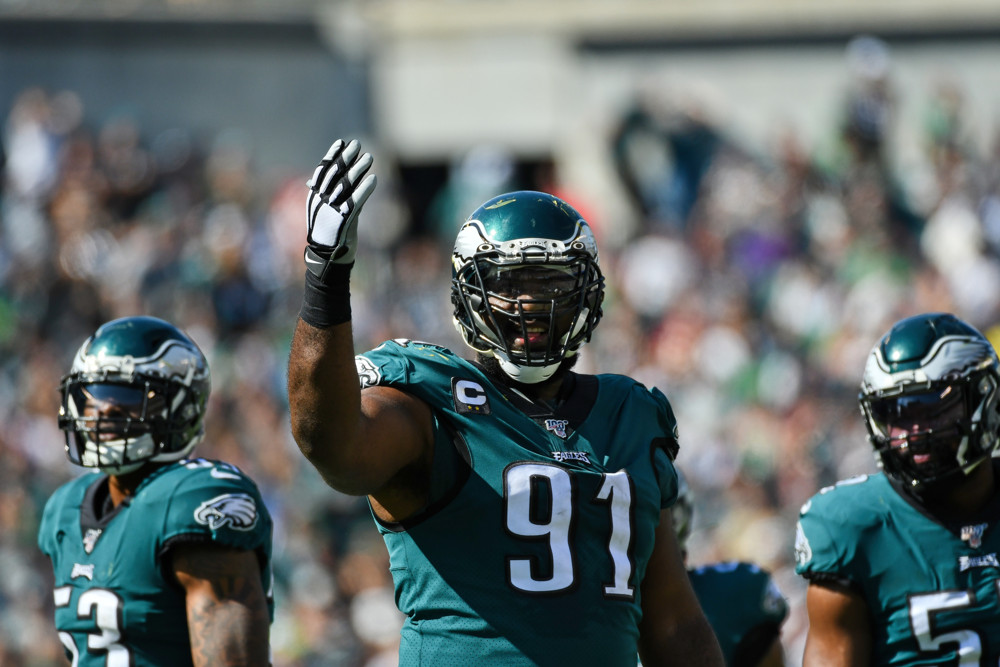 With that in mind, below you’ll find the biggest mismatches between defensive and offensive lines for Week 4. The objective is to project QB pressure through film study, injuries, scheme, coaching and talent.

1. Eagles DL vs. Jets OL
Key matchups: DT Fletcher Cox vs. RG Brian Winters, DEs Derek Barnett/Brandon Graham vs. OTs Kelvin Beachum/Brandon Shell
Notes: Eagles DL ranks last in sacks (3) and adjusted sack rate (2.5%) per Football Outsiders’ DVOA. DE Brandon Graham leads the NFL in QB hurries (22). The Jets OL ranks 30th in adjusted sack rate (11.5%) and has given up the 6th most sacks this season (13). LG Kelechi Osemele was already nursing a knee and suffered a shoulder injury at Wednesday’s practice, leaving his status for Sunday up in the air. DE Derek Barnett is dealing with several injuries, missed Wednesday’s practice, and his status for Sunday is also in question.

The Jets entered this week with Head Coach Adam Gase working in new offensive linemen to potentially replace a handful of starters up front due to injury and subpar play. The ‘key matchups’ are based on the original starters so they may change, but I don’t see any path that would improve the Jets’ chances of having success and hold off an Eagles DL that is due for a breakout game as a pass-rushing group.

Coming into Week 5 the Eagles DL ranks dead last in the NFL in sacks and adjusted sack rate, but there are a variety of reasons for the slow start none more pertinent than superstar DT Fletcher Cox working his way back from off-season toe surgery that caused him to miss the entire off-season. The first quarter of the year has essentially been his time to get his feet underneath him and round into form, which he has shown flashes of doing as of late.

This is the sort of matchup that could see an explosion from Philly’s DL given the low level of competition and uncertainty with the Jets’ starting five. Making it an even safer bet is that the Eagles offense should be able to move the ball against the Jets’ defense and establish a lead, giving the pass-rush ample opportunity to pin their ears back and get after the QB.

2. Patriots DL vs. Redskins OL
Key matchups: DT Adam Butler vs. OGs Wes Martin/Ereck Flowers, DE Michael Bennett vs. all 5 OL.
Notes: New England’s DL is tied for 2nd in adjusted sack rate (10.1%), tied for 1st in sacks (18), and is 1st overall in defensive DVOA. The Redskins OL is 13th in adjusted sack rate (6.1%) with 9 sacks given up. RT Morgan Moses is tied for the 2nd most pressures given up (17). RG Brandon Scherff missed Week 4 and Wednesday’s practice with an ankle.

The Patriots have been a great example of what having elite coverage on the back end can do for a pass-rush this season, forcing opposing QBs to stand in the pocket longer than they want to while a flurry of line games, stunts, and blitzes creates chaos up front.

New England has a versatile crop of rushers such as Michael Bennett, Adam Butler, Chase Winovich, and Kyle Van Noy that align across the line of scrimmage and cause confusion for pass-protection schemes. LB Jamie Collins leads the team in sacks with 3, primarily as a blitzer.

This Redskins OL was down two starters last week in C Chase Roullier and RG Brandon Scherff, with the former likely to play and the latter’s status up in the air. Their RT Morgan Moses has struggled in pass-protection this season and their left side while performing solid up until this point, is vulnerable at LG with Ereck Flowers’ erratic technique and hand usage going to be put to the test this Sunday.

It is hard to envision this going well for a sputtering Redskins’ offense facing off against a defense with complex pass-rush packages and the top-ranked secondary and overall defense in the NFL.

3. Packers DL vs. Cowboys OL
Key matchups: LBs Za’Darius Smith/Preston Smith vs. LT Cameron Fleming, NT Kenny Clark vs. Travis Frederick/Connor Williams
Notes: The Packers DL ranks 6th in adjusted sack rate (8.6%) with the 9th most sacks (12) and both Za’Darius and Preston Smith each rank in the top 11 of PFF’s pass-rushing productivity metric (pressures created per snap). The Cowboys will be without starting LT Tyron Smith who suffered an ankle injury in Week 4. RT La’El Collins missed Wednesday’s practice and is questionable to play on Sunday.

Normally the Cowboys would not find themselves on this list regardless of opponent, but when All-Pro LT Tyron Smith is out and Cameron Fleming is in that changes. Fleming has been solid in the past and is a quality backup, but is a significant drop-off from Smith. Coupled with Collins dealing with a back injury that could hinder his excellent start to the season and there is a recipe here for the Packers front to generate a lot of pressure.

Cowboys center Travis Frederick has not been his usual dominant self so far in 2019 after missing all of 2018 with an illness and while still a good player, faces off against the best nose tackle in football this week in Kenny Clark. Clark went toe to toe with Frederick in 2017 when the latter was at the peak of his powers, so this is a matchup that he can possibly exploit.

Connor Williams struggles with dynamic interior rushers and with Clark, Smith, and Smith likely aligning up over him throughout the game, presents a glaring mismatch for the Packers to capitalize on.

The Cowboys are at home coming off a road loss to the Saints so they will be a tough out for the Packers, but their offensive line is vulnerable in a few different ways, especially considering their injuries.

4. Vikings DL vs. Giants OL
Key matchups: DEs Everson Griffen/Danielle Hunter vs. OTs Nate Solder/Mike Remmers
Notes: Minnesota’s DL ranks 13th in adjusted sack rate (7.6%) with 11 sacks. DE Danielle Hunter is tied with Khalil Mack for the NFL lead in pressures (27) and is 3rd in QB hurries (19). The Giants OL is 10th in adjusted sack rate (5.7%) and 13th in PFF’s pass-blocking efficiency metric, but has given up the 5th most QB hits. LT Nate Solder has given up the 2nd most pressures in the NFL (17).

I’ve been pleasantly surprised by this Giants OL so far in the season, with them exceeding my expectations of being a liability, instead playing like a solid unit. That said, LT Nate Solder is a liability in pass-protection against good or better competition and he squares off against elite edge-rusher Everson Griffen, who is back with a vengeance this season after sitting out 2018.

The next weakest player is RT Mike Remmers who has been playing solid this year but is outclassed against DE Danielle Hunter, a true physical freak at the position that has become a game-wrecker opposite Griffen. There is an additional element of revenge game potential here for Remmers (with Minnesota from 2017-2018), but that also works both ways as it is fair to assume Hunter will be equally motivated for the matchup against his former teammate.

With NT Linval Joseph inside to push the pocket, Giants rookie QB Daniel Jones is going to have to stay on schedule with quick decision-making with his tackles being overmatched against a very good set of edge rushers.

The 49ers have the league’s 2nd best defense based on DVOA, with the 9th best adjusted sack rate as a DL, and a dynamic trio of pass-rushing threats in Nick Bosa, DeForest Buckner, and Dee Ford. Ford has been dealing with a knee so his effectiveness hasn’t been what it was last season, but he is a threat to go off any time he is on the field.

The Browns OL is coming off their best game of the season led by their running game, although arguably the Ravens’ best run-defender Brandon Williams missed the game. The Ravens defense also doesn’t have a single rusher that matches the skill of any of the dynamic trio of rushers that the Browns OL will face this week, so the level of competition ramps up significantly for them.

I need to see the Browns OL play well against upper-tier competition before believing last week was anything more than just an advantageous matchup. Going on the road against a very good defensive front will provide their toughest test of the season.

The Raiders OL has been a good unit as of late with the return of LG Richie Incognito in Week 3, but still has a backup RG in Jordan Devey in the lineup with LT Kolton Miller being an adequate pass-blocker without schemed help to his side.

The Raiders have circumvented their weaknesses up front nicely with a high rate of 12 personnel and a quick-passing game, but will face their stiffest test of the season against a Bears’ defense ranking 6th in pass defense DVOA.

Khalil Mack has been unusually vocal in the media this week talking about how motivated he is for his first game against the team that traded him away last year, with the revenge game factor looming large over this matchup.

Mack has been the league’s most dominant pass-rusher off the edge this season and you could make the case he was last year as well, but what gives me confidence that the Bears have the upper-hand in this one is that Akiem Hicks could return after missing last week, and even if he can’t go, there is a litany of legitimate pass-rushing threats across this defensive front. Paired with top-notch coverage behind them and an ultra-motivated Mack, this will be a must-watch battle in the trenches.

OFFENSIVE LINE MISMATCH OF THE WEEK

One of the top OLs has a struggling defensive front at home. Granted, Quinnen Williams should return for the Jets to provide a boost in the middle of the defensive line, but there is not any edge-rushing presence that scares me against the Eagles’ tackles.