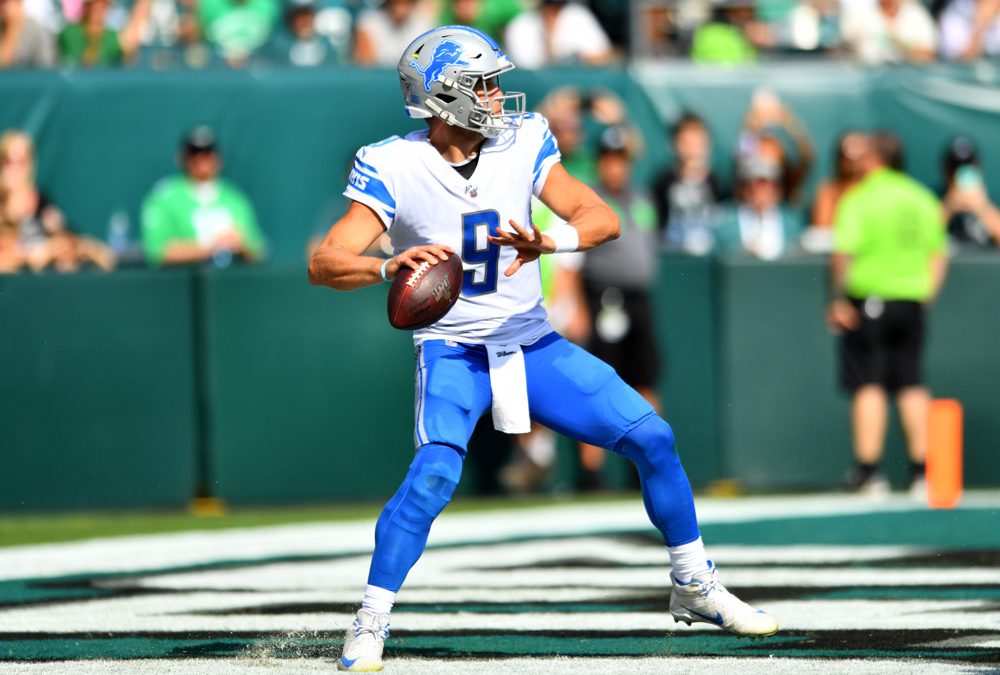 Red-hot Matthew Stafford visits Soldier Field with four top-six fantasy outcomes in his last five starts to face his toughest to-date challenge against a Bears defense that hasn’t allowed a single enemy passer to finish above QB15. Even as DC Chuck Pagano’s unit has taken several steps back from Vic Fangio’s 2018 group, Chicago has held Aaron Rodgers (QB23), Kirk Cousins (QB25), Philip Rivers (QB24), and Carson Wentz (QB19) to undesirable fantasy scores. Stafford’s pass catchers have enough matchup advantages that he could buck this trend, but most signs point toward a down week in what projects as a low-scoring affair. … Chicago’s main defensive deficiency is on the ground, where it was clocked for 93/438/7 (4.71 YPC) rushing by enemy backs over its last four games. Placing Tra Carson (hamstring) on I.R. and all but eliminating Paul Perkins (three snaps) from the rotation, the Lions deployed a two-back timeshare of Ty Johnson and J.D. McKissic in last week’s loss to Oakland. Johnson paced the backfield in snaps (61%) and touches (12) but was outplayed by McKissic, who parlayed his seven touches into 72 yards and a score. As the Bears have allowed the NFL’s fourth-most catches (54) and eighth-most receiving yards to running backs (405), Johnson and McKissic are risky but flex-play viable in this favorable draw.

Stafford’s 2019 target distribution: Kenny Golladay 62; Marvin Jones 57; Danny Amendola 44; T.J. Hockenson 38; McKissic 17; Johnson 16; Jesse James 14; Logan Thomas 9; Marvin Hall 8. … Golladay visits Soldier Field with 100-plus yards and/or a touchdown in 6-of-8 games and a 16-week pace of 70/1,280/14. He leads the NFL in targets inside the ten-yard line (9). An every-week WR1, Golladay’s last two receiving lines against the Bears are 5/90/0 and 6/78/1. Per Sports Info Solutions, Stafford’s on-target accuracy rate improves from 39% to 60% on 15-plus-yard downfield throws in clean pockets; the Bears’ defense has generated pressure on just 31% of dropbacks, eighth lowest in the NFL. … As running back casualties have forced Detroit into a pass-first approach, Jones has leapt to top 15 in the NFL in Air Yards (774) and is averaging a 5.5/72.7/1.0 stat line over his last six games. Jones’ lack of consistency keeps him in WR2/3 territory at Chicago, which has allowed the NFL’s third-fewest fantasy points to receivers. … Amendola’s box-score production has been even less sturdy with 95-plus yards in 3-of-7 appearances, under 40 yards in each of the other four, and zero touchdowns since Week 1. Bears CB Buster Skrine is beatable in the slot, but Amendola is always a shaky WR3/flex option specific to PPR leagues. … Hockenson has run 23 routes or fewer in six of the Lions’ last seven games and played less than 70% of Detroit’s offensive snaps in every game since Week 2. For comparison’s sake, Greg Olsen averages 32.9 routes run per game. Hockenson simply isn’t a big enough part of the Lions’ passing offense for more than low-end streamer treatment.

Mitchell Trubisky’s toilet-swirling career reached a new low in Chicago’s pathetic Week 9 effort at Philly, going 10-of-21 for 125 scoreless yards against one of the NFL’s poorest pass defenses. Nearly replaced by Chase Daniel at halftime, Trubisky should now face weekly risk of in-game benchings for fear of Matt Nagy losing the locker room. … Chicago’s best means of generating offense remains David Montgomery, who has topped 70% snap rates in consecutive games with 48 touches during that span. Gashed by the Raiders last week, Detroit has hemorrhaged 200/903/9 (4.52 YPC) rushing and an NFL-high 64 receiving yards per game to enemy backs. Nearing true every-down-back status, Montgomery is a fringe RB1 play in this plum draw. … Averaging an anemic 2.4 yards per carry and 3.8 yards per target, Tarik Cohen’s snaps are deservedly being scaled back. He’s been droppable in non-return-yardage leagues for weeks.

Trubisky’s 2019 target distribution: Allen Robinson 55; Cohen 39; Taylor Gabriel 25; Montgomery and Anthony Miller 19; Trey Burton 16; Cordarrelle Patterson and Adam Shaheen 11; Mike Davis 8; Javon Wims 4. … Fantasy football’s biggest Week 9 bust relative to matchup-based expectations, Robinson managed six yards on five targets against the Eagles, partly because the Bears ran a season-low 42 plays, partly because Trubisky was terrible, and partly because Robinson simply didn’t make plays on the ball he’s usually good for. Still on pace for a 94/1,064/6 receiving line eight games in, Robinson is a bounce-back WR2 play against a Lions secondary allowing the NFL’s ninth-most fantasy points per game to wide receivers. … Gabriel hauled in a 53-yard bomb to give the Bears brief offensive life early in last week’s third quarter, only to turn in his 18th straight game of 75 yards or fewer. In a dysfunctional offense that struggles to support more than one consistent fantasy contributor, Gabriel is an every-week WR4. … Miller’s playing time has dipped in four straight weeks (77% > 75% > 50% > 41%), bottoming out with last week’s goose egg. … Burton also goosed at Philly and has yet to top 20 yards in a game this year.