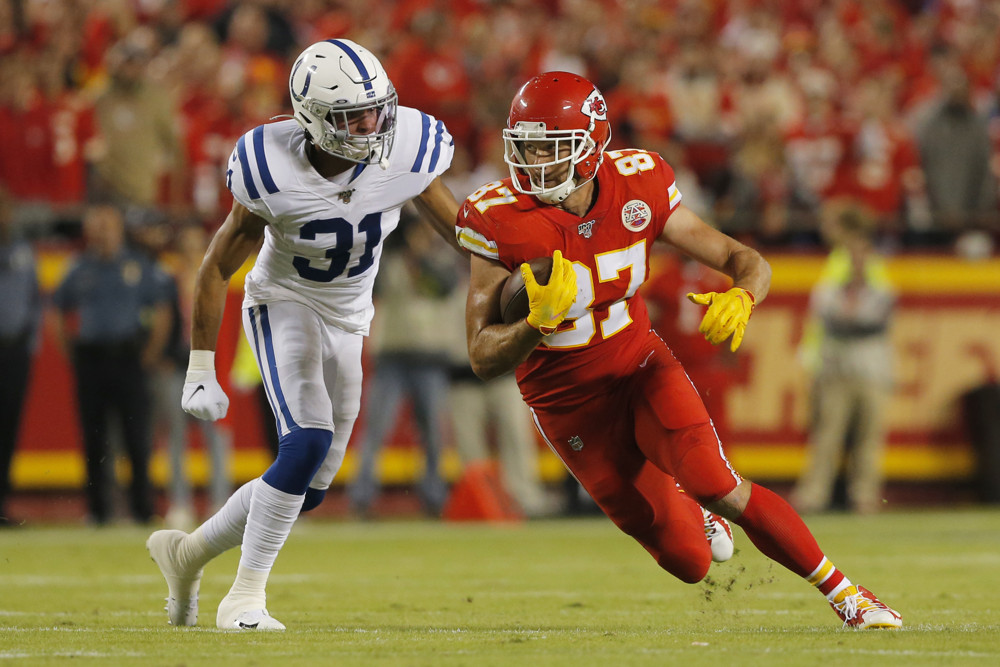 1. Teams targeting tight ends against the Bengals are 14-of-19 passing (73.7%) for 214 yards (11.3 YPA) and a touchdown this year. Even as Mark Andrews’ foot injury has devolved into an on-field concern, his Week 5 playing time (52%) was right on par with Andrews’ season averages, and his 30 pass routes run were Andrews’ second most of the year. Andrews is the only tight end popping in this week’s Buy Low Air Yards Model.

With Marquise Brown not having practiced all week and Lamar Jackson’s dud weighing on what would otherwise be sky-high ownership, it’s difficult to assess what to do with the Ravens in tournaments. Willie Snead is inexplicably priced all the way up to $5500, and Mark Ingram has a high ceiling to go with a similarly high price-tag, priced in the same range as DFS Top Plays Le’Veon Bell and Leonard Fournette. We like running Lamar Jackson either solo or with Mark Andrews in tournaments. Tyler Boyd has an extremely reasonable price to bring it back, and Auden Tate projects to go from being the most owned player on the slate to minimal ownership in just one week.

Tyler Lockett is a GPP-only play thanks to his steep $6400 price tag, but his raw upside is significant here. Chris Carson’s ownership has fluctuated quite a bit at 21.55% and 5.67% in Weeks 3 and 4, and should fall about in the middle of that range this week. Will Dissly’s price has risen dramatically alongside his increasing role, but we think he will be owned enough to be a fade in tournaments for us.

3. Despite his painfully slow start, Odell Beckham ranks top ten in targets and No. 11 in Air Yards (518), and he is set up to rebound from back-to-back sub-30-yard clunkers based on opportunity and matchup.

It’s a thin play for cash, but Odell has a very reasonable price and expectation relative to his advanced stats. We aren’t expecting him to go completely overlooked with a [13-16%] projected ownership, but we still think he’s a good tournament play. Jarvis Landry is also worth a look, as he  was 1.92% owned at $5100 the last time he was on the main slate. He’ll be a bit higher owned this week but is still very cheap at $5200.

4. Teddy Bridgewater encounters a Jaguars defense that held three of its last four quarterbacks faced to fantasy results of QB20 or worse and ranks top seven in the NFL in both sacks (16) and QB hits (34).

Alvin Kamara missing practice Friday with an ankle issue is one of the biggest issues to watch on the slate. We are assuming he’ll play as of Friday PM. His ownership should plummet, so we recommend keeping an eye on the situation and considering him as a contrarian high-priced option in large field GPP only. If he were to miss, Latavius Murray would be an incredible play at $3700. Jared Cook has been 1% and 3.64% owned at a similar price point the past two times he’s been on the main slate. We suspect game-log drafters will be disappointed with Teddy this time around.

With Gardner Minshew ($5000) projecting as one of the top point per dollar QB plays on the slate, and DJ Chark ($5500)  and Dede Westbrook ($5100) both projecting adequately, stacks with one or both WR’s are viable in large fields. Westbrook quietly draws the better matchup and projects to be less owned than Chark.

6. Travis Kelce has drawn seven red-zone targets – second most in the league – with five inside the ten – also second most – yet scored on none of them. Positive regression should hit Kelce very soon.

Texans DC Romeo Crennel’s unit has defended the run decently – holding enemy backs to 4.29 yards per carry – but has been gashed by running backs in the passing game for a league-high 9.0 catches and 67.2 receiving yards per game.

This isn’t going to sneak up on anyone, but Kelce is obviously a good play at a thin position. Don’t be afraid to pay up here. However, many may be scared off by the uncertainty in the Chiefs backfield. We think there’s enough raw upside plus slight contrarian appeal in tournaments for Damien Williams in this spot. Mahomes + Kelce + Williams should be a relatively low owned combination in the most fantasy friendly game on the slate.

8. It’s also a plus draw for Kenyan Drake, who enters Week 6 with double-digit touches in three straight games (11 > 15 > 12), while Washington is permitting an unimposing 4.30 yards per carry and the NFL’s eighth-most catches per game (6.2) to running backs. Drake is a dicey if viable PPR-oriented flex option in one of the best matchups he’ll get all year.

This game is one of the most difficult to project, but there’s a lot of cheap plays who could conceivably be GPP-useful with only one or two big plays. We aren’t expecting Drake to go completely overlooked, but think he’s a reasonable candidate to go overweight the field’s expected [9-12%]. With Albert Wilson ($4000) potentially back, it puts a little bit of a damper on expectations for Preston Williams ($4100) and Devante Parker ($4200). Still, with those price tags, we wouldn’t blame anyone who thinks they have big field tournament appeal. With the Redskins having a new coach who seems firmly on team #EstablishIt, Adrian Peterson ($4500) is at least in theory viable in tournaments. Terry McLaurin’s price is likely going to be too high for most, but he’s proven to be able to put up numbers with Case Keenum and there’s a lot of uncertainty with how this game plays out.

9. Gerald Everett was the Rams’ best skill player in last Thursday night’s loss to Seattle, breaking tackles and stiff-arming haters en route to a career-best 7/136/0 receiving line. Over the past two weeks, only Austin Hooper and Travis Kelce have run more pass routes than Everett among NFL tight ends.

Everett is a player we lean towards being more overweight in tournaments given projected ownership in the [5-8%] range. This might finally be the week that field stops playing Brandin Cooks, potentially creating some contrarian appeal, with his ownership having been similar to Robert Woods’ all season long. Cooper Kupp has elevated to a WR1 type role and price, and should see extremely heavy ownership. If playing Kupp in GPP, we would make sure to go contrarian in at least a few other spots.

Bell’s price is incredible this week compared to the touch volume we can project. However, this won’t be sneaky. Both Jamison Crowder and Robby Anderson project as excellent point per dollar values, but are facing a Cowboys defense that has been excellent vs the pass. All of these Jets should be considered strong “bring it back” options if stacking the Cowboys, but have some standalone appeal in multiple formats as well. On the Cowboys side, we think people will finally be “out” on Ezekiel Elliott at this price tag. His passing game involvement has been mediocre and he hasn’t put up a GPP-worthy game in five tries yet. He offers pay up to be contrarian appeal. Amari Cooper and Michael Gallup are fine options, but don’t project well enough for cash game consideration and aren’t likely to be contrarian. Given the matchup and their raw upside, they are firmly in play for tournaments.