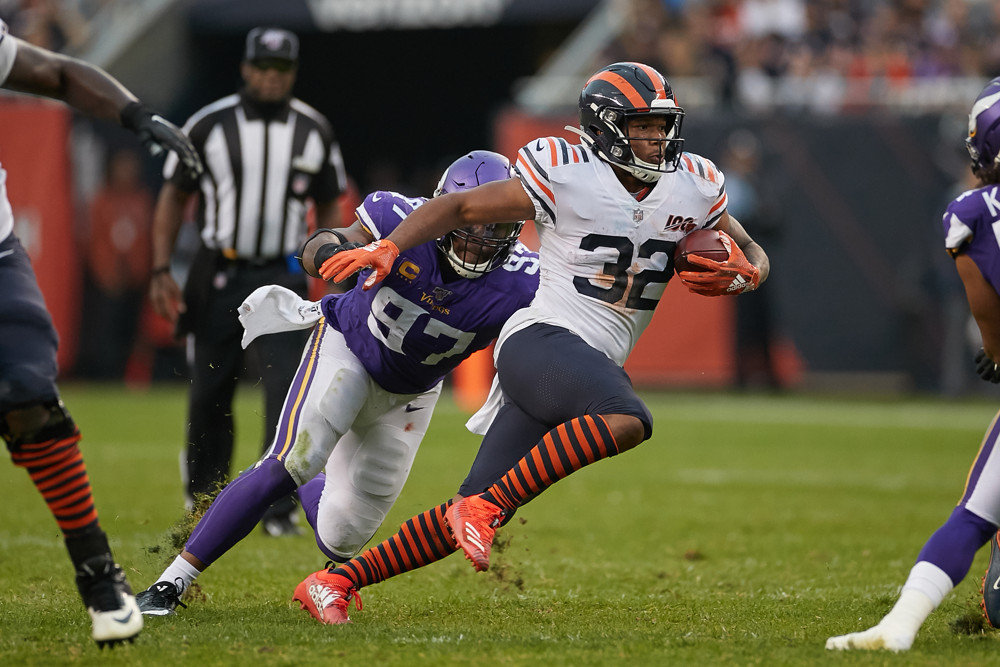 Opportunity is the lifeblood of fantasy performance. Thanks to statistics such as average depth of target (aDOT), Air Yards, routes run, and quarterback dropbacks we now have a more contextual view into the game.

What does the utilization data from the first four weeks tell us? Here are the top trends by position:

1. David Montgomery, Chicago Bears
Playing with a lead for much of the past two games, the Bears have turned to Montgomery as their lead back giving him 45%, 65%, and 69% of the snaps. Over these three games, Montgomery has also usurped the lions share of team rushing attempts (62%, 54%, and 64% of carries). While these trends are positive, there are caveats.

It remains to be seen if Montgomery’s utilization can withstand the pressures of a negative game script. According to Pro Football Reference, 35 (60%) of Montgomery’s 58 attempts have come with a lead of seven points or more. The Bears have led by seven or more on 58% of their plays, making the theory that Montgomery depends on leading game scripts tough to pin down. It is worth pointing out Montgomery leads all Bears runners with 22 attempts in neutral scripts (trailing or leading by three).

Mike Davis was inactive for the Week 4 contest after missing practice time for personal reasons. However, Davis’ playing time has been on the downswing since Week 1 (56%, 25%, 2% snaps played). Tarik Cohen’s role is currently locked in, but his snaps don’t seem to be a limiting factor in Montgomery’s workload. Cohen’s snaps have fluctuated over the past three games (37%, 51%, and 40%), but his uptick in week three didn’t coincide with fewer snaps for Montgomery (65%). Montgomery’s increase has correlated directly with less for Davis.

Montgomery is safe to place in the game-script dependent RB2 tier. His snaps and share of the team rushing workload are likely solidified but needs his team to continue to play with leads to support a healthy amount of team rushing attempts. In games where the Bears are forced to get away from the run, he will take a hit similar to backs like Derrick Henry. The Bears are currently favored by five points this weekend versus the Raiders in London despite losing their starting quarterback.

Jones is delivering more big plays than his backfield mates. According to Pro Football Focus, Jones has three carries (6%) over 15 yards versus one (2%) for Peyton Barber. Jones is also creating more on his own with an avoided tackle rate of 24% versus 11% for Barber.

For the season, Barber has accounted for 60% (three) of the team rushing attempts inside the five-yard line. Jones has only accounted for 20% (one), but that came last weekend versus the Rams, and he paid it off with a touchdown. Dare Ogunbowale continues to serve as a hurdle to playing time in the passing game but has trended slightly down (34%, 33%, 28% routes per dropback) with Jones slightly up.

The Bucs’ coaching staff has been adamant regarding a hot-hand approach, so this situation is far from a lock, but Jones is making a case to be the lead back in an offense that is gaining momentum under new head coach Bruce Arians.

The ground game production for Cook is an aspect that needs no elaboration. However, what is worth noting is his ascension to third in the Vikings pecking order for targets at 18%. With limited utilization of a slot receiver (heavy 12 and 21 personnel looks) and the use of Kyle Rudolph as a pass blocker (93% snap rate versus 66% routes per dropback), Cook has emerged as a key component of the passing attack in this Gary Kubiak style offense. Arian Foster garnered 16% of the Texans’ targets in 2011 under Kubiak as the third option in the passing attack and Cook is trending towards a similar output.

Week 4 provided another blow to Jacobs’ season-long outlook. The Raider running back already found himself on the negative trend list last week due to game script dependencies leading to increased looks for Jalen Richard. Now we have a third consecutive data point regarding a three-way timeshare. DeAndre Washington has received 16%, 30%, and 19% of the team rushing attempts over the past three weeks. While it may not seem like much, it adds up when you consider Jalen Richard’s 11%, 10% and 13%.

Due to this latest trend, Jacobs wasn’t able to break the 20 touch barrier in a game the Raiders led by two scores for almost three-quarters of play. The thought that Jon Gruden might treat Jacobs similar to Cadillac Williams in his rookie season (290 attempts) is unreasonable at this point. His current pace is 248 totes for the season but is at a pace of 208 over the last three games.

The Saints bruising back found himself on the monitoring section of this column last week after seven rough quarters of utilization with Teddy Bridgewater leading the offense. After another week of similar results, it is apparent that Murray’s role is not that of Mark Ingram like many had hoped. Despite a close game script and dominating time of possession versus Dallas, the Saints coaching staff again decided to lean more heavily on Alvin Kamara. Ingram only saw 25% of the snaps and 15% of the rushing attempts.

Carson landed in the negative section of this column last week after opening the door for a three-way committee via fumbling and decreased utilization in the passing game. With Rashaad Penny (hamstring) inactive again, he was able to stave off some of the negative vibes with a strong performance (76% of snaps, 81% of rushing attempts, and 59% routes per dropback).

Week 5 will be an important data point, assuming Penny returns. Despite Carson’s improved utilization metrics, the door remains open for a three-way backfield. With Penny out, C.J. Prosise has likely done enough to secure work as a pass-catching option moving forward. If Penny returns to his normal workload (~30% of rushing attempts), it will push Carson down to RB3/flex status. If Penny splits that work with Prosise rather than taking away from Carson, it will keep Carson in the weekly RB2 with upside conversation depending on potential game script.

Howard exploded in Week 4 versus the Packers with 87 yards rushing, two rushing touchdowns, three receptions, 28 receiving yards, and one receiving touchdown. Last week in this column, Miles Sanders was listed in the negative trends section partially due to Howard’s work inside the five in Week 3. This finding proved to be the case again with Howard securing all of the work inside the five (3 attempts) in Week 4.

In Week 4 the Eagles took the lead with 2:45 seconds left in the second quarter and kept it for the remainder of the game but never lead by more than eight points. In a more competitive script, Howard set season highs in snaps (53%), rushing attempts (45%), routes per dropback (31%), and targets (15%).

There is a chance Howard maintains a slight edge over his backfield counterparts, especially if the Eagles offense continues building leads. However, Doug Pederson’s history with committee backfields is strong, so the likelihood of Howard separating by a large enough margin to make him a weekly RB2 start is low.

The young, speedy receiver lands on the positive trend list for the second consecutive week for a good reason. Despite a drop in production, he has locked in his position as one of the top two options in this rejuvenated passing attack. Brown’s snaps (65%, 74%, 81%) and routes per dropback (84%, 84%, 95%) both continue to rise over the past three games. Brown has led the team in routes per dropback every week during this stretch.

Chark is tied with fellow receiver DeDe Westbrook on the season with 19% of the team targets but led the team two of the last three weeks (27%, 17%, 21%). While the Jaguars’ 58.8 plays per game (26th) and 1.92 plays per minute (30th) are problematic, Chark’s team dominance in Air Yards continues to keep him viable (led team last three weeks). Chark tied for the team lead in routes per dropback Week 4 tying Westbrook at 90%.

With teammate David Moore returning to health over the past two weeks we have seen Metcalf’s utilization take a hit. Metcalf’s snaps fell to 63% in Week 4, and his routes per dropback skid is at three weeks (98%, 87%, 74%). Additionally, the emergence of Will Dissly as a legitimate option is a concern. Metcalf hasn’t topped 15% of the team targets since garnering 20% Week 2. A big aDOT is sustaining decent Air Yards, but at this point the Seahawk’s young wide receiver is only a boom/bust option with the team no longer prioritizing his looks.

Despite these two receivers showing up big in the Week 4 box score, their utilization continues to be problematic. Each player has experienced ups and downs in their routes per dropback and Davis sits at 78% on the season. Brown registers at 56%.

While both have upside in the talent department, there it’s tough to trust players seeing the field so inconsistently on an offense that only drops back to pass 60% of plays (24th in the NFL) and runs 61.5 plays per game (21st). For either of these players to become viable options, Tajae Sharpe’s snaps and routes must fall drastically.

In two games with Daniel Jones under center the Giants slot man (80%) has led the team in targets twice (25%, 29%). Shepard’s routes per dropback (96%, 100%) are consistent with those results. Week 5 will present a new obstacle with the return of Golden Tate, but the loss of Saquon Barkley could be enough to keep Shepard viable.

With D.K. Metcalf, David Moore, and Tyler Lockett all capable of threatening defenses vertically, Dissly is getting plenty of space to operate underneath. According to Next Gen Stats, Dissly tied Tyler Kelce for the second most separation yardage (3.6 yards) for qualifying tight ends in Week 4.

Olsen saw his season-low in target share in Week 4 versus the Texans at 12% but registered season highs in snaps (97%) and routes per dropback (86%). His increase in routes per dropback has been on an upswing for three consecutive weeks. The Panthers will continue to deploy a balanced passing attack across Christian McCaffrey, Curtis Samuel, D.J. Moore, and Olsen. However, the thought that Olsen would take on a lesser role in the passing game is in the past.

The rookie tight end has experienced an increase in snaps three consecutive games (51%, 57%, 67%) and saw a season-high in routes per dropback (69%) in Week 4 versus the Patriots. Knox’s targets have held steady (10%, 11%, 9%) but his utilization trends are encouraging considering his increased usage in the slot (50% per Pro Football Focus) and increasing average depth of target (9.7, 12.5, 16.3). The eventual return of Tyler Kroft will be worth monitoring when it occurs, but at the moment Knox is a viable streaming option in deeper formats.

According to Sports Info Solutions the Packers utilized 11 personnel on 52 of 59 snaps last Thursday night against the Eagles, which was their highest percentage of the season. Due to this change, Graham experienced his season-high in routes per dropback (76%). With Davante Adams leaving the game late with a toe injury, Graham also saw a season-high in target share (17%).

Whether or not the increased usage of 11 personnel was part of a change moving forward or just a game plan specific tweak versus the Eagles is unknown. Matt LaFleur has shown a proclivity to lean more towards 21, and 12 looks like his mentor Kyle Shanahan but does have roots in 11 groupings from his time with Sean McVay.