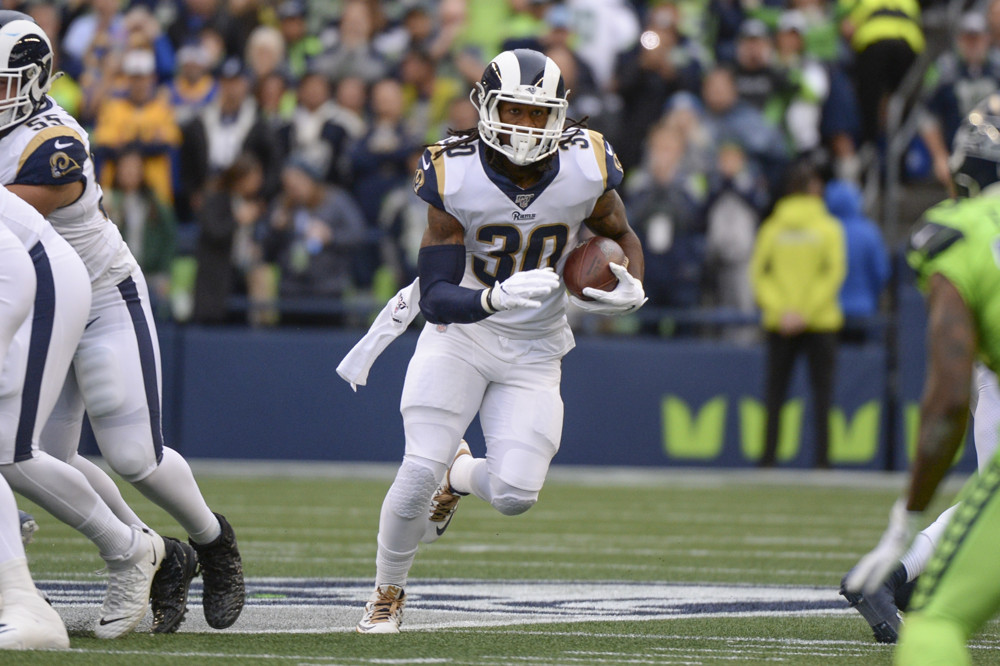 With new offensive installments and lack of playing time for starters in the preseason, the first two weeks of the regular season served as warm-up contests for many teams. Over the past three weeks, new trends and questions have emerged as coaches gain a better feel for their offensive personnel, and players improve their grasp of the scheme and finer nuances of the game.

While Gurley may never live up to the expectations of those who thought he would resume his early 2018 workload, he has settled into a dependable role that we can project with confidence every week. His opportunity counts (rush attempts plus targets) have held between the 15 and 20 range each week (15, 20, 14, 15, 20). In week four, he only received five rushing attempts but picked up ten targets.

Over the past three weeks Gurley has taken all of the rushing attempts from inside the five rather than sharing the load with Malcolm Brown. His snap rates have climbed over the past four weeks (63%, 73%, 75%, 93%). Gurley has taken 56% of the Rams rushing attempts for the season. Week 5 provided a season-high (83%) in a game the Rams were trying to come back to win versus the Seahawks. Gurley’s previous high was 58% in Week 3.

The Rams have won three games by one score, lost one game by one score, and lost one game by two scores. These aren’t the 2017 and 2018 Rams. With more competitive and trailing game scripts, Sean McVay may feel the pressure to turn to Gurley more. It will be interesting to see what budges in Week 6. Will it be the percentage or number of touches? Either way, we can project a floor of 15 opportunities per game with high leverage touches inside the five.

There were concerns of a three-way running back committee forming with the return of Rashaad Penny and the recent emergence of C.J. Prosise in the passing game, which landed Carson on the monitoring section of this column last week. In a competitive back-and-forth game versus the Rams, Carson was the preferred option playing 85% of snaps, garnering 27 (63%) attempts, and running a route on 87% of team dropbacks. Penny played 15% of the snaps and picked up six carries. Prosise didn’t see the field. Carson is safely back in the RB1 mix.

The real story here is the Patriots’ coaching staff trusts their young fullback, Jakob Johnson. After losing James Develin for the season, Michel’s value was hanging in the balance due to his production coming from 21 and 12 personnel sets. After a scary 22% snap rate and 33% attempt share in week three when Develin was first inactive, he has rebounded strongly over the past two games with 74% and 59% of the rushing attempts. The Patriots used a fullback on 42% of plays in Week 5, the most since Week 1.

We have seen Christian McCaffrey relinquish carries only two times this season. Each time they have been to Bonnafon. If McCaffrey were to go down, Jordan Scarlett might see some work too, but Bonnafon is the closest match to McCaffrey in terms of a back that can operate out of the backfield as a receiver. Bonnafon is officially a priority handcuff in deep and medium season-long formats.

In Gordon’s first game back, he shouldered the lions share of rushing attempts with 75% versus Ekeler’s 19%. Gordon also took the only attempt from inside the five. Ekeler maintained his role as a receiver, with a 69% route per dropback rate (above his 63% for the season) and 31% target share. Gordon was active in the passing game as well, with a 38% route per dropback rate and 13% of targets.

It will be interesting to see if Ekeler maintains such a hefty role in the passing game, moving another week deeper into Gordon’s return or if Gordon starts to chip away.

With the return of Coleman, Jeff Wilson Jr. was inactive for the game. While the backs involved changed, the committee approach remained the same. Matt Breida saw his typical percentage of attempts (29%). Coleman accounted for 42% and Raheem Mostert closed out the game in garbage time with 18% (the old Wilson role).

There is a chance this is more of a one-two punch in closer scripts where Mostert’s role could diminish.

With the Chiefs trailing the majority of the game, they opted to pass on 83% of plays, making this a tough situation to decipher. At a minimum, Damien Williams appears to be the preferred option in passing scripts. If his utilization rates hold in close and leading game scripts, he will provide value in the Chiefs high powered offense.

While Freeman’s production has increased with 18 PPR points each of the past two weeks, this is a utilization trend column, not a production column. Freeman has seen his percentage of team attempts and attempts fall three consecutive weeks (80% and 16, 71% and 12, 55% and 11). Freeman’s work in the passing game has helped stabilize his season with 12%, 15%, and 11% of the targets over the past three weeks. However, his routes per dropback have fallen (82%, 47%, 39%). Freeman saw his first carry inside the five this past weekend, but Ito Smith picked up another one as well. For the season, Smith owns 67% of the attempts from inside the five while Freeman has 17%.

It is worth noting Freeman’s declining utilization corresponds with increasingly larger trailing scripts (-3, -14, -21). It is possible his role increases if the Falcons can get things right offensively, but it isn’t a lock. If you can sell high on Freeman, now is the time.

Williams was mentioned in this column two weeks ago before back spasms kept him out Week 4. He was mentioned again last week under the monitor section after Dontrell Inman filled in and picked up 23% of the targets. Back in the lineup for Week 5, Williams delivered a healthy 23% target share. Most importantly, Williams ran a route on 98% of the Chargers’ dropbacks (92% Week 3). Williams is also tied with Keenan Allen for the team lead in end zone target share at 40%. Williams is seeing the heaviest utilization of his career and hasn’t had his biggest game yet.

Coming off of a two-week absence due to a meniscus surgery, Gallup immediately jumped back into the fray with 86% of snaps, 88% routes per dropback, and 30% of targets (all season highs). He has topped 20% target share in each game and is the clear second target in this offense. The only negative for Gallup outside of the injury is his lack of usage in the end zone (0% targets).

Over the past three weeks, Sutton has outpaced Emmanuel Sanders in routes per dropback. He has also led the team in targets two of three weeks, including a season-high 30% target share in Week 5. The Broncos’ commitment to the run (less than 51% dropback rate two of past three games) caps the volume upside for Sutton, but he is locked in as one of the top two targets on this offense each week.

Tate was trending positively before the John Ross injury. In the first full game without Ross, Tate secured a 100% snap rate and was in a route on 97% of dropbacks. Tate is even with Tyler Eifert at 38% of targets in the end zone. In an offense that drops back to pass 71% of plays, Tate will have plenty of opportunities until A.J. Green returns.

Allison played 86% of the snaps and was in a route for 92% of the Packers’ dropbacks with DaVante Adams out. Allison finished second to Aaron Jones in targets with 15%. Jake Kumerow did work in, but Allison remained on the field even in heavier looks. If Adams misses another game and the Packers aren’t playing with a heavy lead, Allison will have a chance to contribute to box scores.

Last week these two landed on the negative trends section of this column. Despite their solid production in Week 4 the concern was Tajae Sharpe’s role continuing to limit time on the field. In Week 5 Sharpe’s snaps and routes per dropback hit season lows (32% and 26%). Coincidingly, Brown and Davis both saw season highs (65% and 74%, 88% and 90%). In an offense that is only dropping back 59% of the time, those numbers aren’t anything to write home about, but they do represent a step in the right direction.

Miller may finally be rounding into form after his preseason ankle injury. His routes per dropback have climbed each of the last three weeks (62%, 74%, 86%), and he tied for second on the team in targets (23%) with Tarik Cohen in Week 5. The Bears passing offense is sitting in neutral, but Miller could have value if things heat up.

Each week a Patriots receiver has gone down (Edelman in Week 3 and Dorsett in Week 5), Meyers has been the guy to step in (63% and 45% routes per dropback those weeks). In deeper formats, he is worth a stash in case one of the Patriots’ pass catchers is unable to go for a longer period.

Diggs’ routes per dropback have settled in around the 80% mark over the last three games after seeing 100% and 91% in the first two weeks. In one of the slowest (two plays per minute) and most conservative (49% dropback rate) offenses in the league, his utilization is too low. Diggs truly needs a change scenery or more shootouts to provide a dependable weekly floor.

With the emergence of Gerald Everett, there is one more mouth to feed in an already crowded passing attack. The use of 12 personnel sets versus the Seahawks limited Cooper Kupp to season lows in snaps and routes per dropback (66% and 84%). Kupp still led the team with 33% of targets, but if this continues, it will increase variance. Kupp is the most directly impacted, but each Rams wide receiver could become more game plan dependent.

After working his way back from an ankle injury, Lacosse saw his highest routes per dropback this past weekend (89%) while playing 94% of the snaps. With the Patriots moving on from Ben Watson and the team struggling to keep pass-catchers healthy, he could see more targets shortly.

Goedert has played 69% and 74% of the snaps over the past two weeks and has seen his highest routes per dropback at 48% and 55%. With the Eagles leading each of these games, the use of 12 personnel has jumped. Goedert won’t likely ascend to consistent Top 3 target status on this team but could jump into the mix any given week. The Eagles’ third option has rotated from Mack Hollins to Jordan Howard to Miles Sanders over the past three games without DeSean Jackson.

Swaim’s usage was on the upswing over the previous two weeks, and in Week 5 James O’Shaughnessy went down. Swaim could approach 70 to 75% routes per dropback range. The two Jaguars’ tight ends have totaled 17%, 24%, and 11% of targets cumulatively over the past three weeks, making Swaim worth a flier.