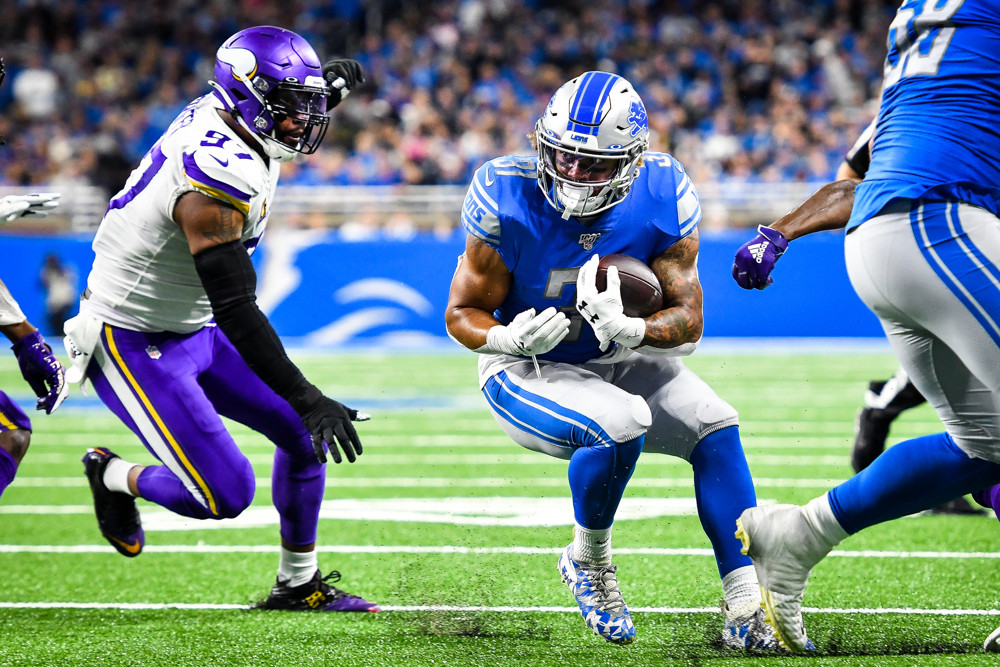 Coleman stays in the positive trend section again this week after leading the running backs in snaps (66%), rushing attempts (51%), and routes per dropback (52%). Coleman’s trends are up in each of those areas over the past three weeks since returning to the lineup. Fellow backfield mate Matt Breida left the game and didn’t retake the field after being cleared to return. Jeff Wilson Jr. picked up the available touches from Breida, but the bigger takeaway is this is looking like a two-way backfield rather than a three-way rotation moving forward with Coleman leading the pack.

With Kerryon Johnson leaving the game early due to injury, Johnson stepped up his utilization in a big way with 65% of snaps, 50% of rushing attempts, and 60% routes per dropback (all led the team). The Lions’ only had J.D. McKissic available to help carry the load, and his snaps (24%), rushing attempts (25%), and routes per dropback (19%) all held steady except for the slight uptick in attempts. The Lions will likely have Tra Carson or recently resigned Paul Perkins available this Sunday and choose to work one of them into the fold similar to earlier in the year when C.J. Anderson worked with Kerryon Johnson.

Since returning from suspension, Tate has posted big routes per dropback (65%, 100%, 100%) and has turned into one of Daniel Jones’s favorite options with target shares of 16%, 32%, and 29%. Sterling Shepard has missed the last two games, Evan Engram missed Week 6, and Saquon Barkley just returned in Week 7. It remains to be seen if Tate can keep up the pace when the Giants have a full complement of weapons, but at the moment, his trends are great.

The Bears’ passing attack is anemic, but Miller continues to play more. Over his last two contests, he has topped 80% routes per dropback and pulled down 23% and 17%. He led the team in endzone targets (2) in Week 7 and has quietly established himself as the second or third option in the passing attack.

Erickson has stepped up in a big way since the injury to John Ross. His snaps (23%, 80%, 94%), routes per dropback (10%, 86%, 98%), and targets (3%, 15%, 33%) have all climbed each week. The former slot receiver is working outside more often (34% slot) and attacking the intermediate areas of the field (10.4 aDOT). He has also seen an endzone target each of the past two weeks. The Bengals’ offense is in disarray, but Erickson is currently one of the top three options in an offense designed to keep three WRs on the field often.

Pettis made the monitoring section of this column last week. He has not seen a big spike in targets to this point, but his snaps (63%, 71%, 92%) and routes per dropback (68%, 74%, 96%) have steadily improved each of the last three weeks. Marquise Goodwin left the Week 7 contest early with a head injury, only playing 11% of the snaps, and Deebo Samuel was absent. With the arrival of Emmanuel Sanders trade this week, it is tough to put too much stock into Pettis’ recent trends, but there is a scenario where he and Sanders see the most snaps together. When this season began, Kyle Shanahan wanted to limit Goodwin and deploy him more like Taylor Gabriel in the 2016 Falcon’s offense.

Callaway made this list last week, but coming off of a bye week, some may have forgotten. His snaps (43% and 69%) and routes per dropback (37% and 88%) have increased each week since returning from his suspension. Week 6 marked the return of Rashard Higgins, but he didn’t see the field. Callaway has led the receivers in aDOT each of his two weeks (16.7 and 13.5) with 13% and 11% of the targets. He has big-play ability and with slightly more involvement, could become a viable punt option in larger GPP contests.

With Will Fuller V leaving the game after only playing 5% of the snaps (hamstring), Stills jumped right into an expanded role. He usurped 94% of the snaps and ran a route on 95% of dropbacks. Stills only saw 15% of the targets, but could easily command 20% plus during the weeks Fuller is out.

The Rams’ receiving corps was listed in the monitoring section the past two weeks due to the emergence of a new option in the passing game – Gerald Everett. Everett has hit the 20% target mark or better each of the past three weeks. During that time, neither Woods or Cooks has hit 20%, and Kupp has experienced a steady decline (33%, 25%, 22%). What once was a three-way split is officially a four-way battle for targets in Los Angeles.

Similar to Callaway, Seals-Jones stays on the list due to last week’s bye. RSJ’s routes per dropback dramatically spiked at 75% in Week 6. In the previous two contests, he saw rates of 47% and 30%. He finished second on the team with 16% of targets and might be in line for similar workloads moving forward. Counterpart Demetrius Harris has coincidingly seen his utilization metrics plummet outside of his involvement in the endzone, where he has two targets in the past two weeks versus zero for Seals-Jones.

Doyle’s snaps have held steady over the past several weeks, but he saw a dramatic spike in routes per dropback (73%) in Week 7. Teammate Eric Ebron saw a season-low 39%. Ebron did not show up on the practice report for Wednesday this week, so it doesn’t appear to be injury-related. Doyle still only saw 13% of the targets, but that number could increase given all of the unproven pass-catchers behind T.Y. Hilton.

There are rumblings out of Seattle indicating they are in the tight end market, but for now, Hollister is trending upward. His snaps have jumped from 36% to 52% over the past two weeks, and his routes per dropback are also up (24% and 59%). In Week 7, he saw 15% of the team targets.