Late-Round QB Is Back 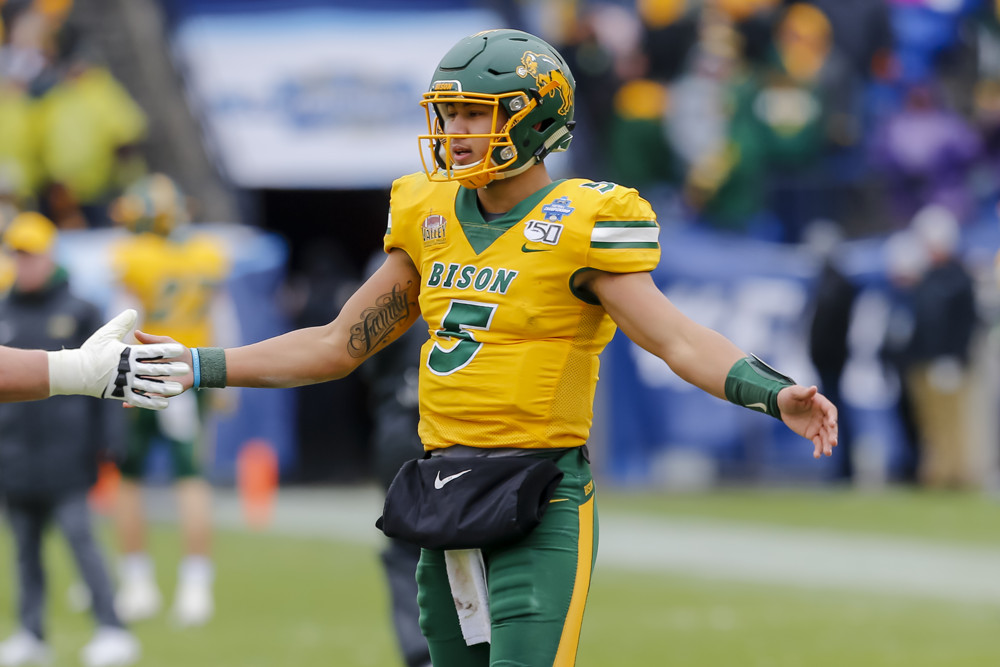 The late-round QB strategy has become commonplace in managed redraft leagues the last handful of seasons after it was popularized by J.J. Zachariason. The logic behind the strategy is pretty straightforward:

However, in 2020 the emergence of a more affordable second tier of elite QBs seemingly changed the game. Not only did the top QBs separate a bit more in 2020, but the QBs who contributed to that separation were more predictable.

This is something that T.J. Hernandez of 4for4.com outlined in a Twitter thread. As T.J. shows, the non-linearity of QB scoring in 2020 benefited drafters who took a high-end QB and negatively impacted those who didn’t:

The problem is that QB scoring has typically been quite linear. In 2020, it wasn't.

If that stays the same, getting "fringe QB1 production" still keeps you well behind the field pic.twitter.com/iHD3IfmtXM

And those high-end QB finishes generally came from investing in a Top-12 QB:

QB ADP is getting more efficient.

In 2015, seven QBs that were drafted outside the top 12 or undrafted finished as top-12 fantasy QBs

In 2020, that number was just three pic.twitter.com/KAo5PbBdex

When you combine the above information with the fact that the second tier of elite QBs drafted came at a more acceptable opportunity cost, late-round QB looks less appealing as a strategy. In FFPC FBG Championship last year, Patrick Mahomes (ADP of 25.38) and Lamar Jackson (26.15) were being drafted too early and with immense opportunity cost. However, if you sacrificed some floor, you could have access to the same ceiling for much cheaper. The grouping of Dak Prescott (65.63), Kyler Murray (74.48), Deshaun Watson (75.7), Russell Wilson (81.03), and Josh Allen (114.71) were profitable as a whole, even with Prescott’s injury. Sacrificing a 2-3 turn pick for a high-end QB is ludicrous, but sacrificing a 6th-8th round pick? The odds start to shift.

I think it’s likely that the 2020 season is both the start of a change at the QB position and an outlier in terms of its steep cutoff point (around QB10). It’s a launching off point in how we should evaluate the QB position in the sense that I believe certain factors are going to continue to lead to higher and more predictable QB ceilings:

So, in that sense 2020 is not an outlier. The reason I think 2020 is an outlier is that I expect the available number of high-ceiling QBs to increase. 2020 in many ways was the start of a trend, and as a result there were a shallower number of QBs benefiting from some combination of their talent and a more aggressive league. Combined with acceptable ADPs on that shallower number of QBs, and you had a perfect storm for eschewing late-round QBs in favor of second-tier elite QBs.

Why do I expect the number of QBs that fit the high-ceiling mold to expand?

For starters, the league tendencies I noted above that applied to that second-tier elite QB cluster last season are going to expand to the rest of the league. Much like in the MLB and NBA where advances in analytics started for a small number of teams and worked their way throughout the league, the same is happening in the NFL in terms of pace, pass aggressiveness, and the embrace of mobile QBs.

Secondly, we’ve seen a big influx of talent at the QB position the past four NFL drafts.

The 2018 and 2019 NFL drafts brought us Lamar Jackson, Josh Allen, and Kyler Murray who all currently have top-four QB ADPs at FFPC.

The 2020 NFL Draft has given us Joe Burrow, Justin Herbert, Tua Tagovailoa, and Jalen Hurts. Burrow has a setup similar to Dak Prescott in Dallas, where we expect the Bengals to play fast, throw often, and feed their trio of high-end WR weapons. Justin Herbert already finished seventh in fantasy PPG among qualified QBs last season. Jalen Hurts has Lamar Jackson-esque rushing upside. Tua has the lowest ceiling of the group, but even he’s on a MIA team that has invested heavily in receiving weapons and shown a willingness to pass at a rate above expected.

The 2021 NFL Draft has given us Trevor Lawrence, Zach Wilson, Trey Lance, and Justin Fields. All four of these QBs run. Lawrence is arguably the best QB prospect since Andrew Luck. Lance enters an awesome team context that could result in him leading the highest scoring offense in the NFL. Fields’ passing profile and rushing upside should have garnered him serious consideration as the No. 2 QB off the board in the NFL Draft. Wilson has the lowest upside of the group, but even he has a dash of rushing upside and some WR depth to target — Corey Davis, Elijah Moore, Jamison Crowder, and Denzel Mims. Plus, Wilson should be starting from Day 1.

The final piece of the puzzle for me is a changing fantasy landscape. Once again, T.J. Hernandez has done a great job analyzing the data here, showing that the market has clearly adjusted to the results of the 2020 season:

QB ADP was falling but 2020 was crazy with dual-threat, efficient passers dominating the landscape and eliminating the linear nature of QB scoring.

Now, QBs are going earlier than they have in a long time pic.twitter.com/IM1YAk0CiL

I recently did my first FFPC FBG Slow Draft with Sam Hoppen, and we completed a Cowboys stack with Dak Prescott at the 5-6 turn. While I’m pumped about the ceiling of that team, I became less enthused with the pick as the draft wore on. In Round 16, we finally decided to take a second QB because Justin Fields was hanging around. In retrospect, it may have been a poor selection. We’re never starting Fields over Dak, and if Dak gets hurt, our premium investment in the Cowboys’ offense is likely derailing our odds of putting together a winning team anyways.

Regardless, it got my brain thinking that there’s some serious value in the current crop of rookie QBs and even some sophomores. Jalen Hurts is pricey, but in the ninth round he has just as much upside as many of the top seven QBs, all of whom are being drafted on average before pick 85 (and the top five before pick 65). Joe Burrow is going at the end of Round 11, Lance in Round 13, Fields and Lawrence in Round 14, etc. Why not take a chance at the high-end upside from these options and stockpile your skill position players early? In a 20-round league like FFPC FBG, you can eschew some of the risk of the rookie options not starting out of the gate as names like Tua Tagovailoa, Baker Mayfield, Daniel Jones, and Zach Wilson are essentially free and lined with at least some upside. The acknowledged drawback here is that you do lose a roster spot to stash a skill player since you have to roster a second QB, at least for the early part of the season.

In essence, I’m not sure the old dynamic of streaming pocket passers in good matchups is going to be able to match the increasing upside of high-end QBs like it has in the past, but I do feel confident that we may see a bit more disruption in who those high-end QBs end up being given an expanding pool of QBs who have meaningful ceilings.

Putting it all together, here’s a summary of my early redraft thoughts concerning the QB position: