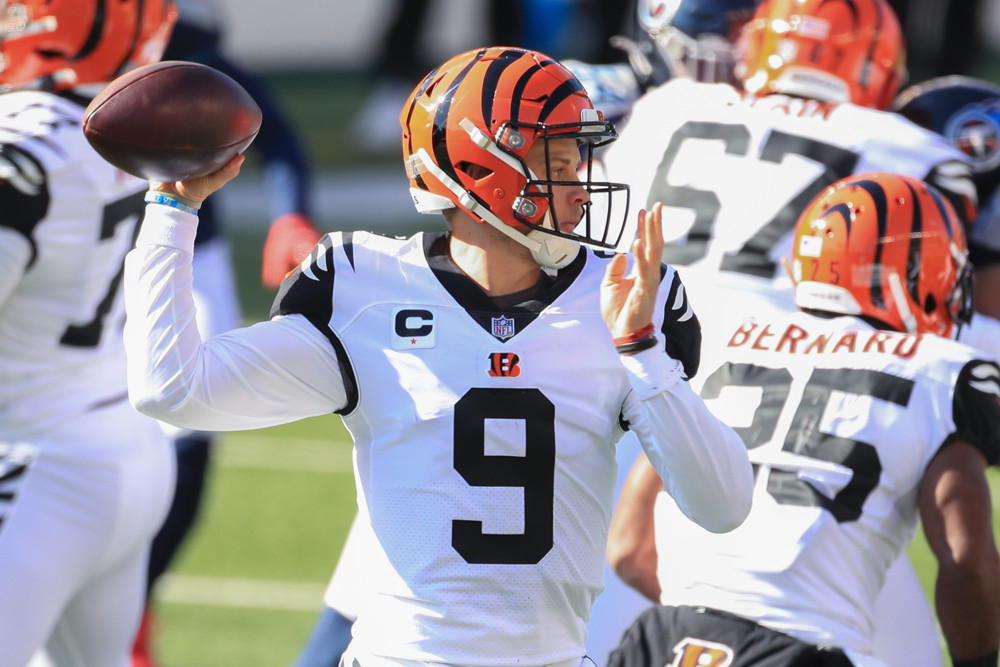 One of my favorite early season stacks is the Cincinnati Bengals. My friend Anthony Amico affectionately calls the 2021 Bengals “Cowboys North”, and there are a lot of similarities here. Both offenses boast a legitimate top-end WR trio and potentially high-end QB play. Both offenses should rebound in a big way this season, as QB injuries and poor offensive line play derailed them a year ago.

Perhaps most importantly, both offenses are fast-paced and throw a lot.

Here are the weekly offensive plays run for both teams while Dak Prescott and Joe Burrow started respectively (visuals courtesy of Sam Hoppen and data courtesy of nflfastr): 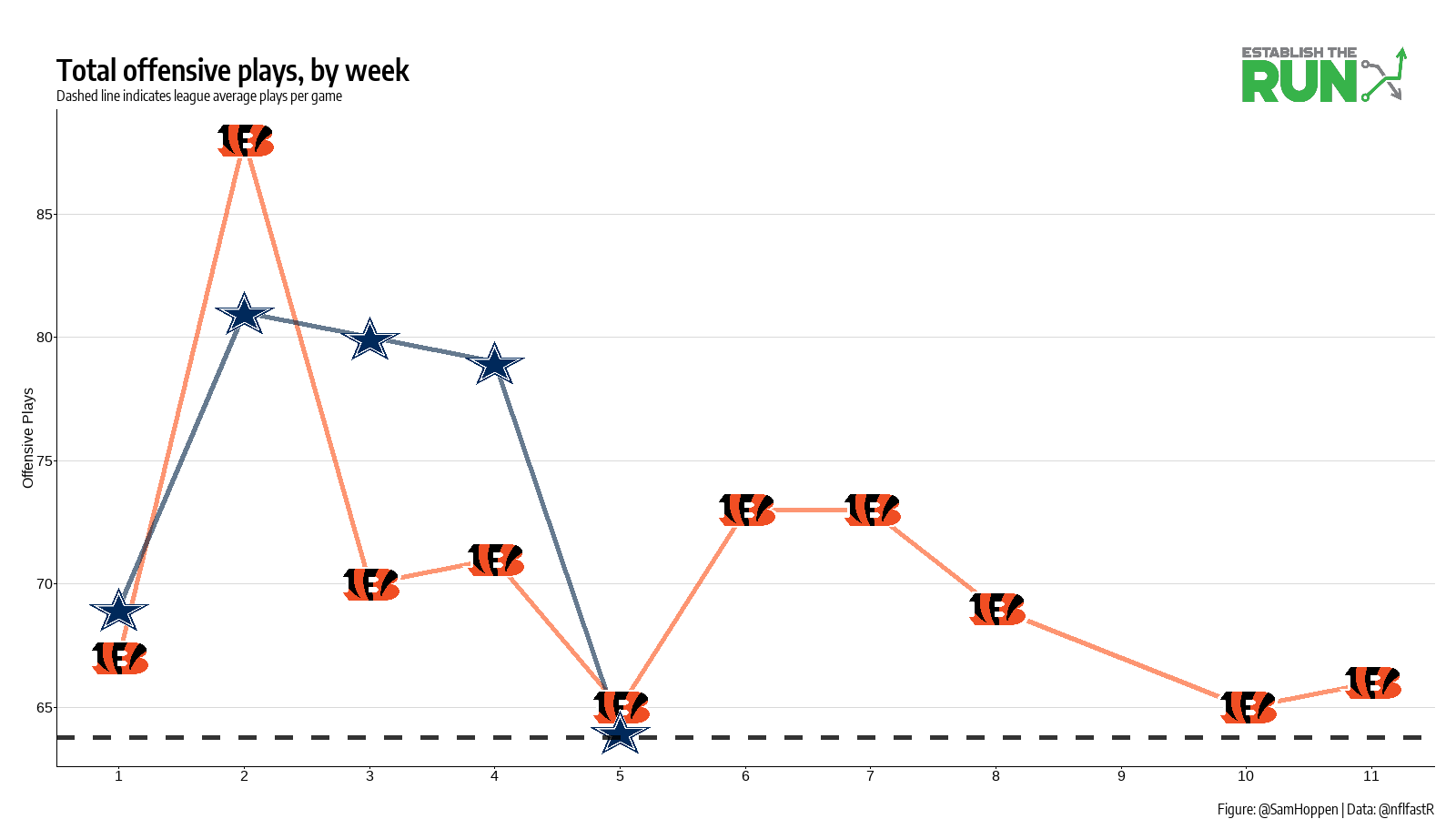 While both teams suffered from bad defenses, which may have led to an enhanced pace, it’s clear they will play fast. Not a single week did these offenses run below the league average amount of plays (63.86). The Cowboys averaged 74.6 plays, and the Bengals averaged 70.7 plays per game.

Over that span, the Cowboys threw a ton, due to a combination of game script and their pace. They averaged 51 called pass plays per game. It is worth pointing out, though, their pass rate over expectation was neutral. The aforementioned game script led to a high expected pass rate of 67.5%, when the league average is 60.5%.

Meanwhile, the Bengals, also had a higher expected pass rate than league average (62.1%), but they threw additionally more than expected. In total, in games Burrow started the Bengals threw the ball 4% more than expected, which led to an average of 46.8 attempted pass plays per game. 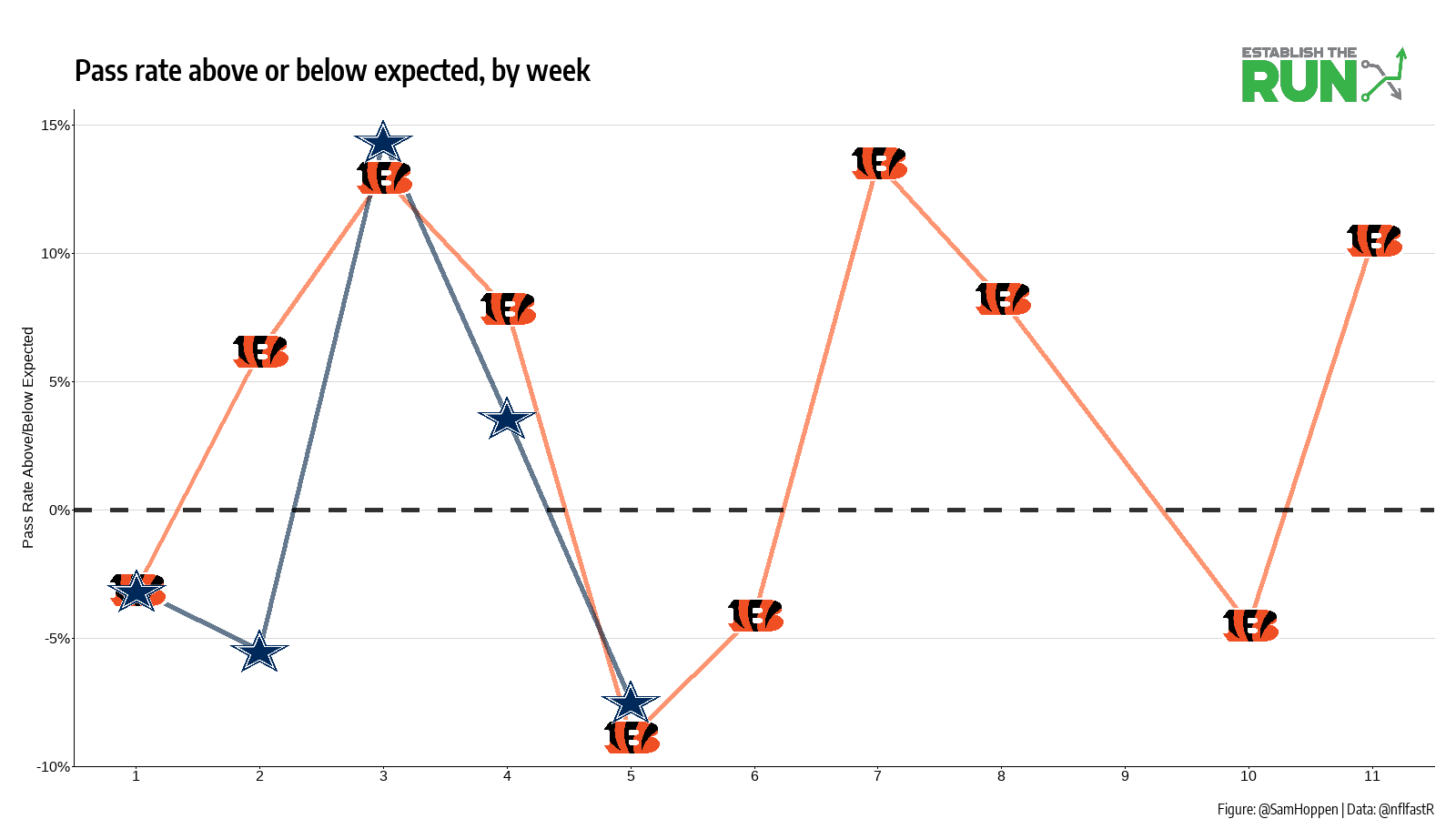 In essence, we have a Bengals team this season that is likely to:

— Run a lot of plays

Fast forward to the selection of Ja’Marr Chase fifth overall in the 2021 draft, and you have some concern about the target share breakdown for Chase and the incumbents, Tee Higgins and Tyler Boyd.

Those concerns are moot due to a combination of the lofty pass attempt expectations for the Bengals and an expected uptick in passing efficiency (more on this in a bit). I’d also expect the Bengals’ aerial attack to be heavily concentrated on those three players….a la the Dallas Cowboys.

In Dallas, Cooper, Lamb, and Gallup all posted target shares north of 17% and registered 100-plus targets each, as did Boyd, Green, and Higgins, despite Boyd missing a game (and a half) and Higgins getting worked in slowly to begin the season. The combined target share was 56.9% (56.2% for the Cowboys trio), and I actually think there’s a lot of growth potential there, whether you’re applying it to the Bengals or Cowboys. For example, in Carolina, Robby Anderson, D.J. Moore, and Curtis Samuel combined for 66.6% of their team’s targets. Pittsburgh’s high-volume passing offense was able to support three top-30 players in the NFL in targets: Diontae Johnson (eighth), JuJu Smith-Schuster (17th), and Chase Claypool (29th).

There’s also some hidden upside in concentrated offenses. If one of Chase, Higgins, or Boyd gets hurt, the other two WRs should benefit from increased volume, expanding their individual ceilings. This is generally not priced into the market, since the market is overlooking the target share upside and focusing on the target expectation in a traditional setting — a mistake given the chaos of an NFL season. Put another way, the market is valuing players with no target competition around their target max, since it’s how those players project Week 1, but they have little room for growth potential beyond that. However, the market is not valuing players with heavy target competition at their target max, leaving room for growth potential. The former is a fragile bet, while the latter has some anti-fragile elements.

When we have a concentrated target share, like we expect to see in Cincinnati, we shouldn’t obsess over guys eating into each other’s volume. Are the total team pass attempts going to be there? Almost assuredly, yes. Are they going to be quality pass attempts? I think so.

Joe Burrow posted a measly 6.7 YPA last season and was just okay in PFF passing grade (19th out of 42 qualified passers). However, Burrow was under siege often last season, and if we look closer at where he performed well/poorly the picture gets rosier. As Mike Renner pointed out when ranking the 2020 rookie QBs in January, Burrow performed well in a clean pocket and on intermediate throws, which is a more stable judge of his talent than where he performed poorly (under pressure and on deep balls). Prior to getting drafted, PFF had surmised whether or not Burrow was the best college QB since they started college grading.

We’re hopeful the Bengals’ offensive line improves this season. They used their second-round selection on Jackson Carman, an offensive tackle from Clemson, and additionally drafted two other linemen. Offensive line prognosticating is not my forte, but the Bengals should be better here than last season, when they ranked 27th in PFF pass blocking grade.

Replacing A.J. Green with Ja’Marr Chase should also buoy this passing game. The age model came for A.J. Green last season in a big way. Among qualified WRs, Green ranked 101st out of 112 in yards per route run in 2020. Meanwhile, Chase is arguably the best WR prospect since Amari Cooper in 2014, something Blair Andrews of RotoViz wrote about in April. In some ways, it feels like Chase has been a little bit undervalued; because he’s been such a clear No. 1 WR in this draft class, we haven’t spent as much time discussing his prospect profile as we may have in other years.

Our own Pat Kerrane has Chase ranked No. 1 in his rookie dynasty rankings, and he expanded on why in his detailed article on the top WR prospects here. In short, Chase is:

— Broke out as an underclassman despite playing with other talented WRs (Justin Jefferson, Terrace Marshall)

You can currently draft:

Arguably, Burrow has the worst standalone price tag right now, but since he goes after the receivers, it’s a bit clearer when you should sacrifice a little bit of value and grab him before or around ADP.

This article is devoted to the passing stacks for the Bengals, but I do want to note that Joe Mixon has top-three RB upside this season between improved TD equity, a three-down role (bye, bye Gio), a better offensive line, and overall volume stemming from the Bengals’ pace.