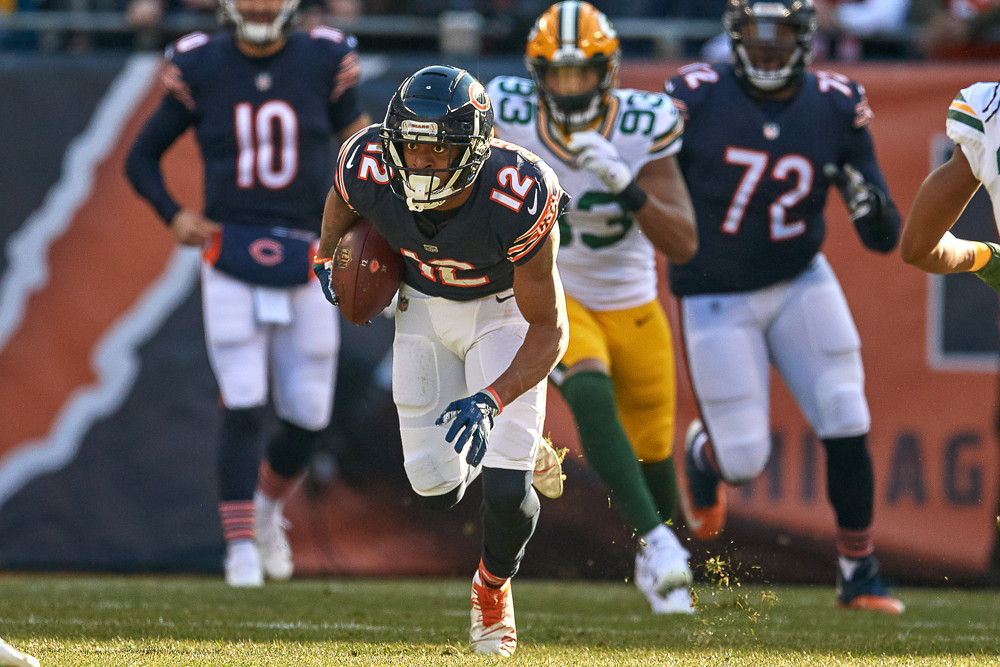 NOTABLE INACTIVES (Will be updated after official inactives): WAS ruled out TE Jordan Reed.

The most important part to being successful in one-game Showdown contests is constructing a highly correlated lineup built around how we think the game will be played. As we head into Thursday’s matchup that features the Bears at Redskins, we have an 9-game sample that we can analyze for winning roster construction and look at any meaningful trends to apply moving forward. The winning lineups for the first nine games are as follows:

The analysis in this section will continue to evolve as we get more information about winning Showdown lineups. Now on 4-of-9 winning rosters, DST’s continue to be deserving of roster consideration. Through nine slates DST’s are averaging 7 DraftKings points at a $4000 average salary and 20% ownership. If we break this down further by favorites versus underdogs, we see favorites priced up to $4600 and owned at a 27% clip as opposed to just $3300 and 12% ownership for underdogs. Because DST scoring is extremely high variance and scoring events like turnovers and defensive touchdowns are largely unpredictable, we may be able to leverage the field by rostering the cheaper, lesser owned option.

Kickers have been slightly more productive than DST’s to start the Showdown season and have found their way onto 6-of-9 winning rosters. Kickers are scoring on average just over 8 DraftKings points at $3300 and 24% ownership. If we look at all fantasy performances through three weeks we see that DST’s offer a wider range of outcomes and a higher ceiling than kickers due to the ability to score defensive touchdowns. Thus far, defenses and kickers have been priced “reasonably” by DraftKings, resulting in adequate or better point per dollar median projections. If prices start to rise, or if ownerships rise, these options become less viable GPP picks. Whether we’re MME players or building just a single lineup, the ability of cheap players to outscore both kickers and DST’s will determine how often we need to roster either position. 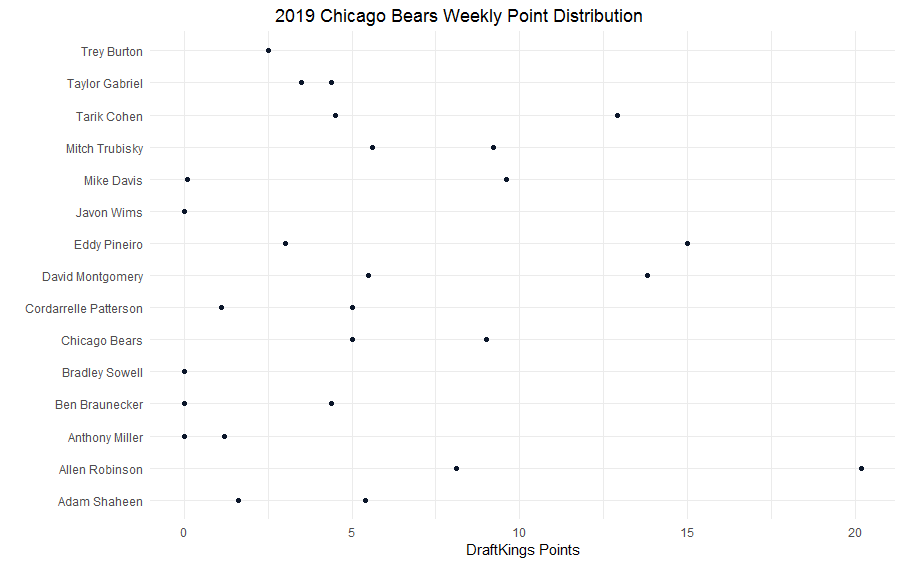 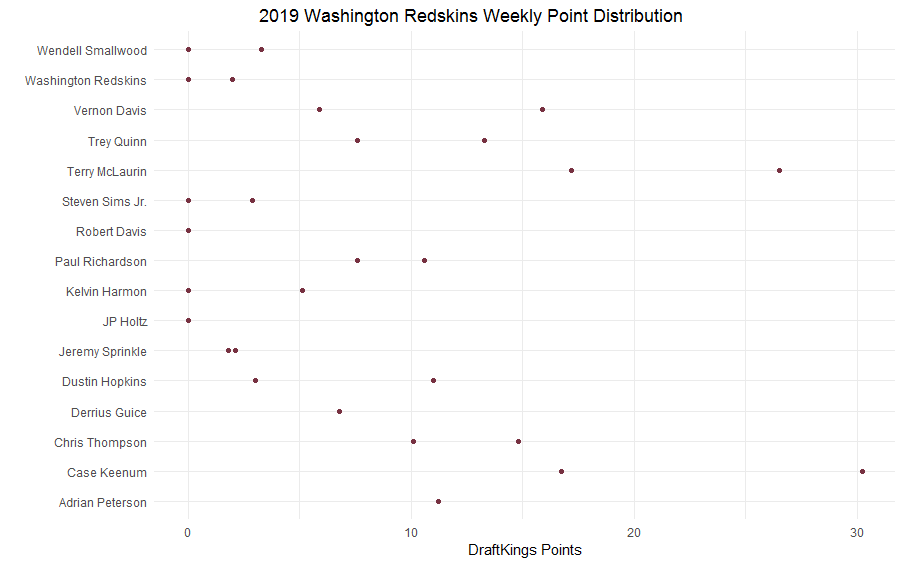 Through the first two weeks of the 2019 season, the Bears have been a massive disappointment on offense. Week three’s matchup presents a potential bounceback spot so we’re not ready to bail just yet. Allen Robinson ($9,800) has been one of the lone bright spots on this otherwise anemic Bears offense. Robinson is the undoubted WR1 in Chicago and is seeing elite WR1 level usage; running a route on 95% of snaps, seeing 28% target market share and a massive 48% of the team’s air yards. He flashed some upside in week one on a 7/102/0 line but due to the poor QB play he’s yet to fully breakout. As noted in matchups its likely Robinson draws shadow coverage from the dusty Josh Norman. Taylor Gabriel ($4,400) checks in as the clear WR2 for Chicago, playing on 89% of snaps, running a route on 94% of dropbacks and seeing seven targets through two games. The underlying usage would suggest Gabriel has been unlucky to put up a mediocre 3/35/0 line through two games. After barely playing in week one Anthony Miller ($3,600) saw his snap count rise to 52% in week two operating primarily in the slot. His playing time is concerning but if we believe he continues to work into his slot role he could be in a good buy-low situation. As Silva notes, the Bears TE situation is a mess. Currently questionable with a groin injury Trey Burton ($6,000) headlines the group. Burton’s price does not reflect his current role in this offense as he shared snaps with Adam Shaheen ($2,800) and Ben Braunecker ($600). None of the three TE options offer much in the way of Showdown upside as Shaheen saw his opportunities dip with Burton’s week two return but Burton didn’t do enough himself to pay off his elevated price tag. The RB situation is nearly as difficult to project heading into week three. It would appear that David Montgomery ($9,400) took over as the RB1 in week two as he handled 62% of the team’s rushing attempts. Montgomery is priced in the same range we’ve seen Leonard Fournette, Nick Chubb, Todd Gurley and Josh Jacobs priced at in previous slates. While it’s encouraging to see his week two usage increase, it’s yet to be determined if that type of usage will continue. Tarik Cohen ($6.800) saw his snaps, routes run, targets and air yards all decrease in week two as Anthony Miller took over a larger role in the slot and Montgomery handled a larger share of the RB snaps. Mike Davis ($1,800) is the wild card of the group, being priced way down after being virtually eliminated from the offense in week two. If we think he can reclaim week one type usage he could pay off his cheap salary. Mitchell Trubisky ($10,400) has been atrocious to start the year. However, Trubisky showed in 2018 he had a wide range of outcomes, flashing his 30+ point ceiling on multiple occasions.

While the defensive matchup is difficult, the Redskins offer access to a more concentrated offense. Terry McLaurin ($8,600) has been a monster to start the season, handling 20% of the teams’ targets and 52% of the air yards through two weeks. While it’s important to consider matchup and QB play, based off of opportunity alone McLaurin is underpriced given his current role. Paul Richardson ($5,000) is the defacto WR2 in Washington, through two weeks he’s seen 10 targets on a 9.2 aDOT. Trey Quinn ($3,800) carries an intriguing price tag, as he’s seeing more snaps, routes and targets than Richardson. His skill set isn’t conducive to ripping off chunk plays but he could see massive volume in a negative game script. Chris Thompson ($7,400) is tied with McLaurin for the team lead in targets at 20. With Derrius Guice on the shelf, Thompson will continue to see WR2/3 type usage in the passing game and a few additional touches on the ground. Adrian Peterson ($5,800) is entirely game script dependant but should continue to see 60%+ of the running back touches and nearly all of the GL attempts. Vernon Davis ($7,800) has performed well in Jordan Reed’s absence, running a route on 78% of dropbacks but priced higher than Jared Cook, O.J. Howard, Darren Waller and Greg Olsen have been on previous slates he’s a tough sell. Case Keenum ($10,200) will face his toughest test of the year but has the weapons and volume necessary to succeed.

*Captain Allen Robinson, Mitchell Trubisky, Trey Quinn/Terry McLaurin – This is as good of a ‘get right’ spot as the Bears offense can get. Robinson’s usage makes him one of the best captain options on the night.

*Captain Terry McLaurin, Taylor Gabriel, Allen Robinson – McLaurin offers elite WR1 usage at a slightly depressed price tag. While he draws a tougher matchup than Robinson he ranks highly in terms of probability to be the slate’s top scorer.

*Captain Mitchell Trubisky, Allen Robinson, Taylor Gabriel – Although it hasn’t been on display to start the season we know Trubisky offers some rushing upside, we can capture some of that by rostering him as our captain and including two pass catchers to maximize our touchdown upside.

*Captain David Montgomery, Trey Quinn, Chris Thompson – If Montgomery’s usage continues to trend in the right direction, the Bears could ride him to a victory Monday night. PPR studs Quinn and Thompson could rack up points in a come from behind effort.

*Captain Case Keenum, Terry McLaurin, Allen Robinson – The Redskins have shown they’re quick to abandon the run when trailing, if they fall behind early the increased volume for Keenum could make him an intriguing captain option.

*Captain Adrian Peterson, Allen Robinson, Tarik Cohen – As 5-point underdogs, game script would suggest Chris Thompson is the RB to own for Washington. If instead the Redskins control the game, Peterson will see increased opportunities.

*Captain Chris Thompson, Allen Robinson, Mitchell Trubisky – Thompson benefits from the Redskins 78% pass rate when trailing. Assuming the Redskins do fall behind early, we could see the upside that made him one of the best pass catching running backs in recent seasons.

If a player is listed above as a Captain option or as part of a stack they are worth rostering as a stand alone flex as well. As discussed above the need to roster kickers and DST’s is tied to how many rosterable players we have in the same salary range. As noted in the team analysis section, this slate offers just a few cheaper players who can access a ceiling on volume alone or by finding themselves in the endzone. While constructing rosters consider the game environment/outcome necessary for these cheap players to beat the kickers and/or DST’s.

Vernon Davis – With Jordan Reed on the shelf, Davis has been used as a full-time TE1. As Silva noted in matchups, the Bears have been been vulnerable to tight ends.

Tarik Cohen – Appeared to have his snaps and routes cut as Anthony Miller took a larger share of the slot role. Cohen is still the 2nd most targeted option in the Bears offense and popped in Hermsmeyer’s week 3 buy-low model.

Trey Burton – Burton has been a limited participant in practice all week, it seems he’ll be able to go Monday but remains in a three-way timeshare at TE.

Paul Richardson – The Redskins are almost exclusively running 11 personnel meaning Richardson is on the field for virtually every snap. He sets up well in a game the Redskins should be trailing.

Taylor Gabriel – While the results haven’t been there yet, Gabriel is running a route on nearly every Trubisky dropback and is 2nd on the team in air yards.

Trey Quinn – Quinn’s PPR specific skill set gives him a path to outscoring the kickers that he is priced $400-$600 more than.

Anthony Miller – Miller saw his snaps go from 21% to 52% in week two. If he continues to trend in that direction it may hurt Cohen and make Miller underpriced at $3600.

Adam Shaheen – Shaheen would become a much better option if Burton were a surprise inactive. His usage predictably dipped with Burton active in week two but still managed to draw three targets.

Cordarelle Patterson – Patterson is more of a dart throw given his minimal usage but given that he’s seen three rushing attempts and three targets through two weeks, it appears he’s having a few plays drawn up to take advantage of his skill set.

Mike Davis – Davis saw his usage tank across the board in week two, seeing fewer snaps, rushing attempts and targets. It’s possible week two was more game specific than it was indicative of future usage.