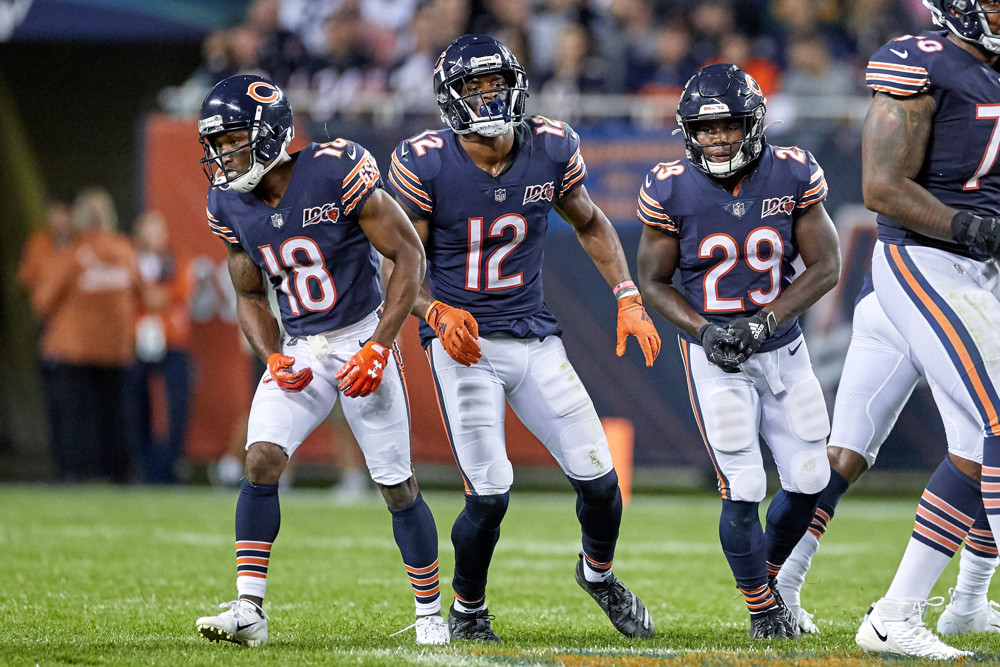 Coach Matt Nagy’s decision to turn Chicago’s running game over to David Montgomery came a week late but nevertheless occurred in last Sunday’s two-point victory at Denver and should serve as the focal point of the Bears’ Week 3 game plan after Washington was mauled by Eagles and Cowboys backs for a combined 53/249/1 (4.70 YPC) rushing line in Weeks 1-2. While it remains concerning that Cordarrelle Patterson (two touches), Mike Davis (three), and Tarik Cohen (six) all took Week 2 bites out of this still-RBBC pie, Montgomery’s commanding 19 touches are reassuring as to his RB2/flex bankability in a plum draw. … Although Mitchell Trubisky’s Weeks 1-2 performances were about as bad as it gets – the Bears are averaging more yards per rush attempt (4.5) than pass attempt (4.2) and Trubisky completed just one throw further than ten yards downfield in last week’s win – they did take place in two tough spots versus an upstart Packers defense that looks like one of the best in the league and on the road in Denver facing ex-Bears DC Vic Fangio, who practiced against Trubisky every day for the last two years. A much softer foe, the Redskins were clocked for Week 1’s QB8 effort by Carson Wentz and Dak Prescott’s QB3 Week 2 result and have allowed the NFL’s second-most quarterback rushing yards (74), a strength of Trubisky’s he’s surprisingly barely put to use early this year. Nevertheless, I’m maintaining at least some level of optimism Trubisky can deliver on DFS small slates and as a two-quarterback-league start.

Trubisky’s Weeks 1-2 target distribution: Allen Robinson 20; Cohen 15; Davis and Taylor Gabriel 7; Adam Shaheen 5; Montgomery 4; Patterson, Trey Burton, and Ben Braunecker 3; Anthony Miller 2. … Another reason for Trubisky optimism is Josh Norman’s deterioration into dust, which Robinson should be able to exploit all night long. Norman has been victimized on 9-of-13 targets (69.2%) for 170 yards (13.7 YPA) and two touchdowns, setting up Robinson as an upside WR2 play with top 20 to-date marks in both targets and Air Yards (220). … Now mostly playing slot receiver over Miller, Cohen’s Weeks 1-2 touch counts were 8 and 6. Cohen does maintain small-slate DFS appeal as Chicago’s No. 2-targeted pass catcher, however, and promisingly popped in Josh Hermsmeyer’s Air Yards Model as a Week 3 buy low. … The rest of the Bears’ pass-catching corps is a mess with Burton, Shaheen, and Braunecker sharing tight end time and neither Gabriel nor Miller seeing fantasy-viable usage. In terms of one-game DFS-slate playability, I’d rank Bears as follows: Robinson > Trubisky > Montgomery > Cohen > Gabriel.

As usual, the Redskins’ offense is largely hands off facing an elite Bears defense that contained Aaron Rodgers (QB23) and Joe Flacco (QB17) in Weeks 1-2 and held Packers and Broncos backs to a 42/129/0 (3.07 (YPC) rushing line. As it pertains to one-game DFS slates, Adrian Peterson does carry some appeal in what should be a closer contest than last week’s versus Dallas, where Peterson scored an early goal-line TD but was scripted out by negative flow. Chris Thompson is tied for second among NFL backs in catches (12) and is always capable of making low-end PPR noise. … The Redskins’ lone wideout worth serious fantasy consideration is on-fire rookie Terry McLaurin, who ranks top five in the NFL in Air Yards (277) and top three in end-zone targets (3) while sporting the third-highest average depth of target (18.1) in the league. Only one wide receiver to have faced the Bears has topped 52 yards so far, although Emmanuel Sanders (11/98/1) showed Chicago’s secondary is not impenetrable. … Trey Quinn is getting next to no downfield opportunities but has eight catches in two games and could be a cheap source of PPR production on DFS small slates. … With Jordan Reed (concussion) continuing to make no tangible progress, Vernon Davis should be a near-every-down player versus Chicago. Teams targeting tight ends against Bears DC Chuck Pagano’s defense are 15-of-19 passing (79%) for 133 yards and a touchdown.