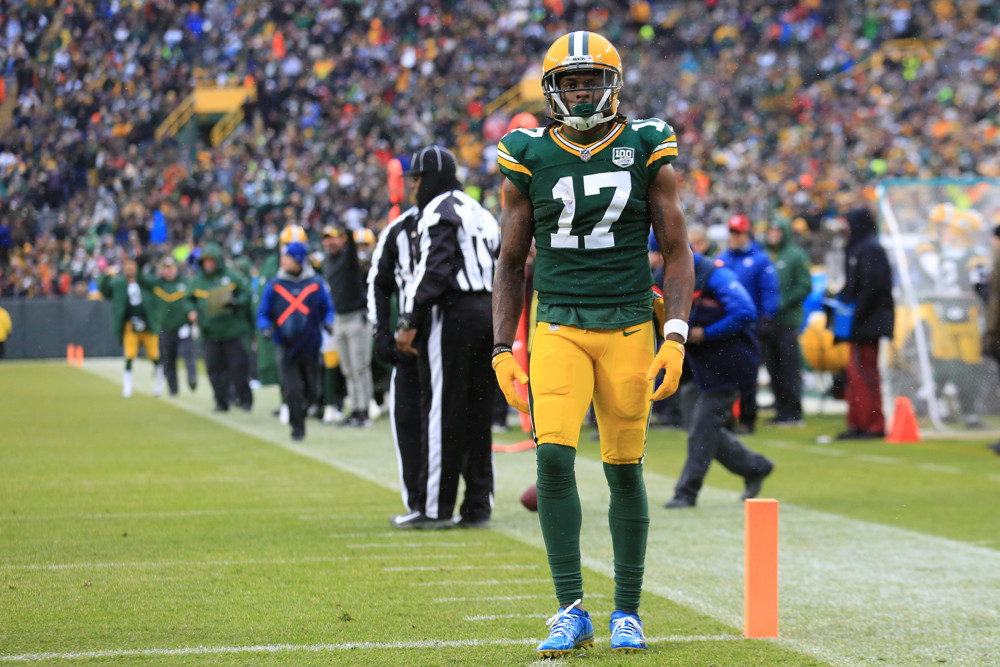 Aaron Rodgers suffered a tibial fracture and MCL sprain last Week 1 but still logged QB7 fantasy results with the second-most attempts (597) and passing yards (4,442) of his 14-year career. Had Rodgers’ TD rate (4.2%) fallen in line with his career average (6.2%), he would have thrown twelve more touchdown passes and finished QB3 behind only Patrick Mahomes and Matt Ryan. Now healthy and due for positive-TD regression, Rodgers remains squarely in fantasy’s QB1 upper echelon. Sean McVay/Kyle Shanahan understudy Matt LaFleur should add creativity to an offense that grew stale under Mike McCarthy, and Rodgers has lost little off his fastball after attempting the NFL’s fifth-highest rate of 20-plus-yard passes (15.2%) and posting the league’s third-highest QB rating on such throws (124.0). The Packers’ confusing pre-camp release of difference-making DT Mike Daniels weakens their defense and increases Rodgers’ pass-volume expectation.

Davante Adams capitalized on Green Bay’s spiked passing volume by finishing second in the NFL in targets (169) and logging a career-best 111/1,386/13 (12.5 YPR) receiving line as Rodgers’ unquestioned go-to weapon. Adams leads the league in both receiving TDs (35) and red-zone targets (77) over the last three seasons and is firmly in his prime at age 26. As Rodgers failed to show consistent chemistry with any of the Packers’ ancillary pass catchers last season, Adams enters 2019 as my No. 1 fantasy wideout.

Geronimo Allison got off to a scorching-hot 2018 start, playing 75% of Green Bay’s offensive snaps in Weeks 1-4 and putting together a 76/1,156/8 full-season pace only to suffer a Week 4 concussion, a Week 5 hamstring strain, and a Week 8 groin strain that required year-ending surgery. The Packers re-signed Allison to a one-year, $2.8 million deal and inserted him at slot receiver during OTAs. Although Allison doesn’t stand out from a speed (4.67) or athleticism standpoint, he looks like the safest bet to finish second on the Packers in targets in the Mohamed Sanu role under ex-Falcons assistant LaFleur.

No. 3 wideout is up for grabs between 2018 draft picks Marquez Valdes-Scantling, Equanimeous St. Brown, and J’Mon Moore, and 2018 preseason star Jake Kumerow. Valdes-Scantling earned the most playing time of the group last season and ran with the first team across from Adams in OTAs. Rodgers talked up “MVS” in particular at the start of camp, noting Valdes-Scantling has begun playing to his timed speed with confidence growth. At 6-foot-4, 206 with 4.37 jets, Valdes-Scantling offers the highest ceiling among Green Bay’s complementary receivers. MVS out-targeted St. Brown 73 to 36, and Moore earned only 70 snaps all year. Kumerow destroyed in Green Bay’s first two preseason games (3/76/1, 3/114/1) last year but suffered a severe shoulder injury in August. Kumerow returned to catch a 49-yard touchdown pass from Rodgers in Week 16. A tall drink of water at 6-foot-5, 208, Kumerow is a sleeper to win No. 2 perimeter receiver duties.

Jimmy Graham’s Packers debut was a disaster, finishing 23rdamong 30 qualified tight ends in yards per route run (1.16) and drawing just nine red-zone targets after Graham led the entire league in red-zone targets (26) in Seattle the year before. Graham’s playing time was scaled back as the season wore on. Turning 33 in November, Graham’s best days are clearly behind him, and the Packers agree after drafting Jace Sternberger in the third round. Sternberger averaged 17.3 yards per catch and scored ten TDs on 48 receptions as a junior at Texas A&M, then showed adequate athleticism at the Combine with a 4.76 forty at 6-foot-4, 251. Sternberger figures to eat into Graham’s snaps as the season progresses.

Aaron Jones returned from his Weeks 1-2 suspension as a part-time player behind Jamaal Williams, then earned Green Bay’s lead back job by severely outplaying his competition. For a seven-game stretch in Weeks 8-14, Jones averaged 17 touches for 99.6 yards and scored eight touchdowns. Unfortunately, Jones suffered his second right MCL sprain in as many seasons in Week 15 and missed most of the final three games. Called out for his conditioning by GM Brian Gutekunst after the season, Jones nearly trimmed his body fat in half (5.3%) by cutting out candy and soda. As 4-of-5 starters return from a Packers offensive line that finished No. 7 in Football Outsiders’ Adjusted Line Yards last year, Jones is worth drafting as an RB2 with RB1 upside as the explosive favorite for touches on a high-scoring team.

Jamaal Williams faded from relevance as Jones took over, finishing below 4.0 yards per carry for the second straight year and managing a 46% Success Rate that ranked 32ndamong 47 qualified rushers. (Jones’ 55% Success Rate was sixth best.) A grinding plodder lacking breakaway speed, Williams’ No. 2 back role should be challenged by sixth-round pick Dexter Williams, a much more explosive runner who averaged 6.4 yards per carry at Notre Dame and tested in the 70thpercentile athletically. (Jamaal is a 36th-percentile athlete.) Dexter is one of my favorite later-round Dynasty rookies in a backfield where Jamaal represents unimposing competition and Jones has a history of knee injuries and off-field woes.

The Packers’ Win Total is nine games, a number they’ve failed to reach in consecutive years but have beaten in seven of Aaron Rodgers’ 11 seasons as a starter. Last year’s club fell short of its Pythagorean Win Expectation by 1.4-2.6 games and went 3-6-1 in one-score contests, which should regress toward the mean. GM Brian Gutekunst bolstered Green Bay’s pass rush by signing Za’Darius Smith and Preston Smith to high-priced free agent deals and using the No. 12 pick on Michigan EDGE Rashan Gary, while the offense is talented enough compete for the league lead in points. With Rodgers healthy, I like Green Bay’s chances of retaking the NFC North crown from the Bears and finishing in the 10-11 win range.