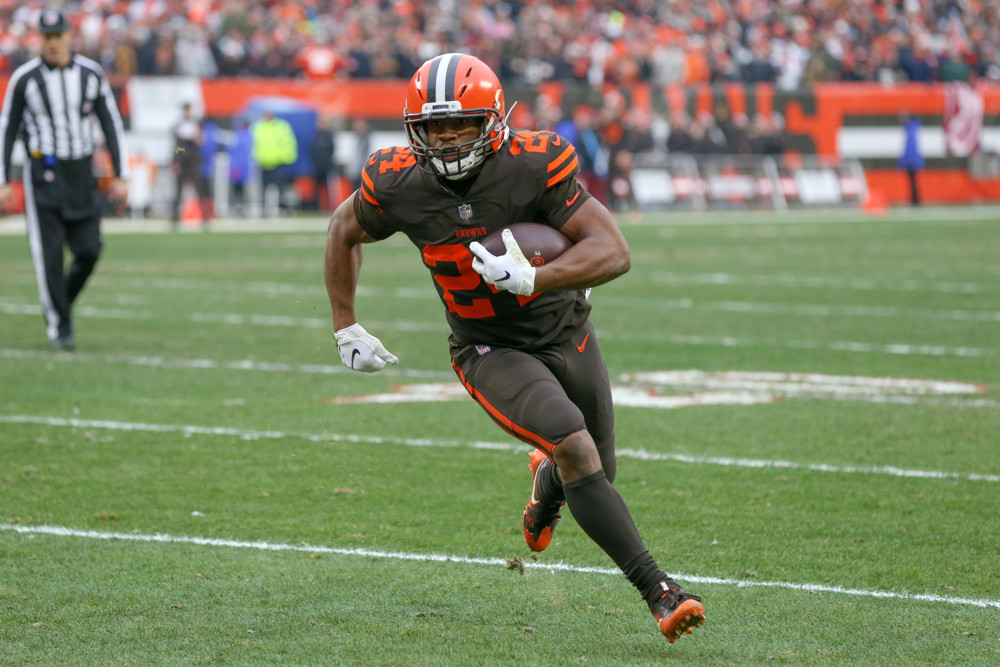 The Browns’ 2018 season turned around when they fired Hue Jackson and installed Freddie Kitchens as offensive coordinator in Week 9. From that point forward, Baker Mayfield was fantasy’s QB7 in points per game with a sterling 8.6 yards-per-attempt average and 19:8 TD-to-INT ratio. Cleveland returns each of Mayfield’s six most-targeted pass catchers and acquired Odell Beckham, whose presence in the lineup added 41.9 yards, 0.41 touchdowns, and 4.2 fantasy points to Eli Manning’s career per-game averages in five seasons together. Promoting Kitchens to head coach, the Browns also stole Air Raid OC Todd Monken, who engineered a 2018 Bucs offense that ranked No. 4 in yards per play (6.3) and 12th in points per game (24.8). Monken’s passing attack is highly aggressive; Jameis Winston posted the NFL’s second-highest Average Depth of Target (11.3), and Ryan Fitzpatrick was third (10.8). After breaking Peyton Manning and Russell Wilson’s shared record for touchdown passes by a rookie, Mayfield’s dynamic supporting cast and advanced coaching position him to vie for top-five QB1 stats.

Odell Beckham arrives in Cleveland to experience the best quarterback play of his career. Mayfield’s 7.7 yards-per-attempt average as a rookie is a number Eli hasn’t touched since 2011 and reached only twice in his 15-year career. PFF charted a league-low 50% of Beckham’s 2018 targets as “accurate” – on-frame or in-stride — while Mayfield posted the NFL’s fourth-highest accuracy rating from Week 9 on. Despite playing with washed-up Manning, Beckham’s receiving line is 102/1,354/9 (13.3 YPR) over his last 16 games with 85-plus yards and/or a touchdown in 12 of them (75%). Although Beckham’s target upside isn’t as lofty as fellow tier-one receivers Davante Adams and DeAndre Hopkins due to the depth of Cleveland’s pass-catcher corps, OBJ’s ceiling remains sky high in an efficiency-friendly environment. Particularly due to situational deep threat Antonio Callaway‘s early-season absence, expect Beckham’s aDOT to rise with increased big-play chances. Mayfield attempted the NFL’s sixth-highest percentage of 20-plus-yard throws (14.8%) as a rookie, and Monken has a lengthy track record of overseeing vertical passing attacks at LSU (JaMarcus Russell), Oklahoma State (Brandon Weeden and Justin Blackmon), and Tampa Bay with Winston, Fitzpatrick, and 2018 yards-per-reception leader DeSean Jackson.

Jarvis Landry’s usage was slashed when Kitchens took over, his weekly target average falling from 11.8 in Hue-coached games to a very-nice 6.9 in a wider-distributed offense that didn’t force feed a specific individual. Landry’s 2019 volume outlook is further damaged by Beckham’s addition, pushing each incumbent Browns pass catcher down the target ladder. As Landry is a possession-slot receiver who averages 10.4 career yards per catch and has exceeded five touchdowns just once in five seasons, the inevitable volume loss severely diminishes his ceiling and renders Landry a low-upside WR3/flex option at best.

Antonio Callaway lost his bid for third-receiver duties by reporting to camp out of shape, suffering a high ankle sprain in Cleveland’s preseason opener, then drawing a four-game suspension for violating the league’s substance-abuse policy. Rashard Higgins will open 2019 in three-receiver sets alongside Beckham and Landry. A possession-style technician who has gotten better every season, Higgins’ 10.8 yards per target quietly led last year’s Browns among pass catchers with at least 30 targets. In his contract year, Higgins will look to parlay his increased opportunity into a 2020 starting job elsewhere. Despite immense talent — I compared him to Santonio Holmes based on his college tape — Callaway is merely a boom-bust Dynasty stash at this point.

David Njoku’s per-game target average fell from 6.4 with Hue to 4.6 with Kitchens as the Browns spread out their passing game and fed Nick Chubb. Njoku finished a disappointing 18th among 30 qualified tight ends in yards per route run (1.30) and was criticized by management for his blocking, leading GM John Dorsey to sign ex-Chiefs TE Demetrius Harris, who blocked on 53% of his 2018 snaps. (Njoku blocked on 39%.) Although Beckham’s addition may enhance Njoku’s efficiency by commanding defensive attention and spacing the field, Njoku’s likely volume loss is a concern for his consistency.

Last year’s Week 7 Carlos Hyde trade thrust feature back duties onto game-breaking power back Nick Chubb, a Jamal Lewis clone who averaged 19.6 touches for 97.2 yards over Cleveland’s final ten games, scoring eight TDs and leading the NFL in yards after contact per carry (4.42). Chubb averaged just 2.0 receptions per game in his starts, however, after catching only 31 passes in his four-year college career. The Browns’ trade of Kevin Zeitler created a gaping hole at right guard after Chubb ran behind the league’s premier interior line as a rookie, and Kareem Hunt is eligible to come off suspension in Week 10, threatening Chubb’s workload in the fantasy playoffs. Nevertheless, Chubb’s difference-making Weeks 1-9 upside in a probable high-scoring offense keeps him safely near the first-round fantasy fringe. The Browns’ early-August trade of Duke Johnson also enhanced Chubb’s passing-game outlook.

The Browns took a one-year, $1.1 million flyer on Kareem Hunt, who was drafted by Dorsey in Kansas City before Hunt’s Chiefs career ended last Week 12 when video surfaced of Hunt kicking a woman in a hotel. Hunt was officially suspended eight games and will be eligible to play in Week 10. A tackle-breaking machine who led the NFL in rushing as a 2017 rookie and offers superior versatility to Chubb, Hunt should not struggle to earn double-digit touches on a weekly basis with fresh legs down the stretch. Although Hunt will be difficult to stash on standard-league fantasy benches for over half the year, his best-ball appeal remains intact, and Hunt could become a league winner if Chubb misses time.

Until Hunt returns, Dontrell Hilliard is expected to operate as the Browns’ No. 2 back after the team dealt Duke Johnson to Houston. Undrafted out of Tulane last year, Hilliard runs 4.47 at 5-foot-11, 202. Albeit in a tiny sample, Hilliard secured 9-of-10 targets for 105 yards last season and gained 12-plus yards on four of those nine grabs, all told averaging 11.7 yards per catch. Hilliard creeped into the back end of my Top-150 rankings as a deep sleeper worth rostering in Dynasty leagues.

The Browns’ Win Total is 9.0, a mark they haven’t reached since 2007. No NFL team generated more offseason hype as GM John Dorsey parlayed Sashi Brown’s treasure trove of assets into Odell Beckham, Sheldon Richardson, Olivier Vernon, Morgan Burnett, and Greedy Williams after landing Baker Mayfield, Denzel Ward, Jarvis Landry, Damarious Randall, and Nick Chubb last year. The 2018 Browns undershot their Pythagorean Win Expectation by 0.2-1.8 games, going 5-4-1 in one-score affairs but closing out the season with five wins in the final seven weeks thanks in large part to dramatically improved coaching. Cleveland’s 2019 schedule is the NFL’s fourth softest based on Opponent Win Totals, and the roster has fast become one of the ten best in the league. Give me the over on 9.0 wins.