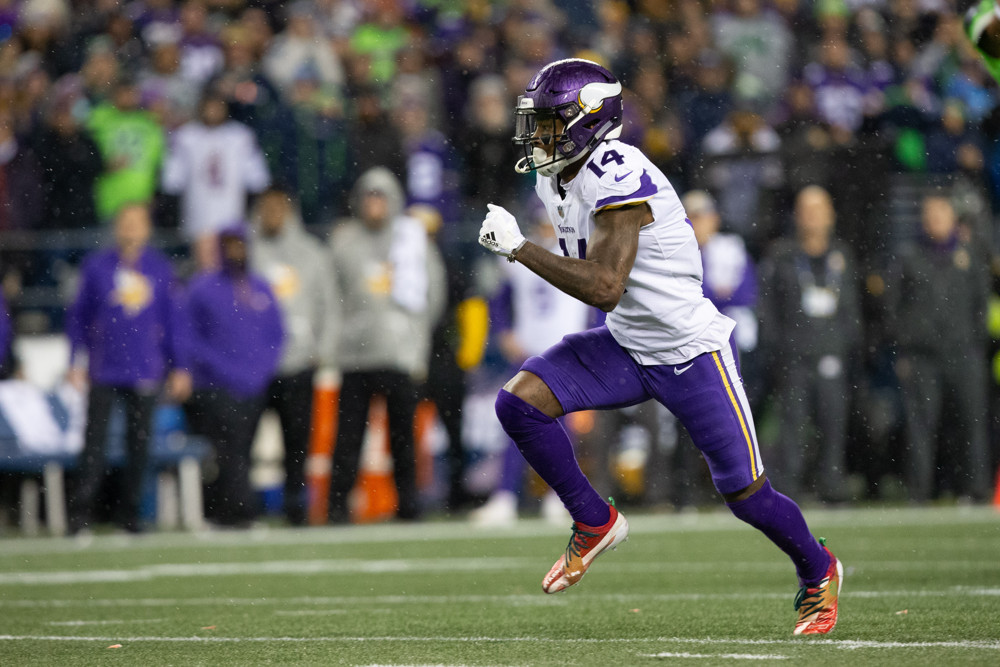 Although Kirk Cousins’ first Vikings season was viewed as a disappointment based on Minnesota’s 8-7-1 record and failed playoff bid, Cousins’ individual play wasn’t to blame with career bests in completion rate (70.1%), passing yards (4,298), and touchdowns (30). Cousins accomplished those feats despite facing pressure at the NFL’s sixth-highest rate (39%) among 38 qualified passers. Coach Mike Zimmer identified a scapegoat in pass-first OC John DeFilippo, firing “Flip” after 13 games and installing a run-based philosophy under interim OC Kevin Stefanski wherein Cousins’ pass attempts per game dipped from 40.3 in Weeks 1-14 to 27.3 in the final three. Gary Kubiak’s offseason hire and the Vikings’ first-round investment in C Garrett Bradbury further their run-first commitment and intent to utilize Cousins as a caretaking game manager, naturally reducing his box-score expectations as a limited-ceiling QB2.

Adam Thielen needed no time to click with Cousins, drawing double-digit targets in each of their first seven games together and tying Calvin Johnson’s record for consecutive 100-yard receiving games (8). Thielen finished fourth in the NFL in both receptions (113) and catches for first downs (74). Albeit in a tiny sample, Thielen’s targets per game sank from 10.8 to 4.0 after Stefanski replaced DeFilippo, however, as Dalvin Cook and Latavius Murray were promoted to offensive focal points, and the passing game took a backseat. Thielen is a very good player with a high floor – he’s finished Nos. 7 and 17 out of 93 and 96 qualified receivers in yards per route run over the past two seasons – but the Vikings’ run-first preferences pose a threat to Thielen’s ceiling. As Thielen ran over half of his routes in the slot in each of the last two years, Cook’s healthy return to siphon short-area targets is an additional concern. And Thielen’s slot usage may be reduced in 11-personnel packages with Chad Beebe (76% slot rate last year) leading the Vikings’ No. 3 wideout race.

Stefon Diggs enjoyed his healthiest season in 2018, missing just one game (Week 9, ribs) while setting career highs across the board (102/1,021/9) as a target magnet in DeFilippo’s pass-heavy attack. Diggs’ yards per target were a career-low 6.85, however, as the Vikings’ inability to protect Cousins forced DeFilippo to drop Diggs’ Average Depth of Target from 11.5 in 2017 to 8.6. Although Diggs’ aDOT is likely to rise as a beneficiary of Kubiak’s play-action game, he too is in danger of losing volume in a run-heavier environment. Diggs also overshot his TD expectation in each of the last two years with 17 end-zone trips on a modest 26 combined red-zone targets, putting Diggs at regression risk.

Kyle Rudolph was the subject of offseason trade rumors before eventually signing a team-friendly, four-year, $36 million extension with no guaranteed money beyond 2019. A colossal 2018 fantasy dud, Rudolph finished 22ndamong 30 qualified tight ends in yards per route run (1.18), 62ndamong 70 in PFF’s pass-blocking grades, and 62nd in run blocking. Despite the “extension,” no one should be surprised if Rudolph loses snaps to superior blocker David Morgan, intriguing second-year TE Tyler Conklin, and second-round pick Irv Smith, who offers the highest pass-catching ceiling in Minnesota’s tight end unit. Beyond deep leagues and tight end-premium formats, this looks like a 2019 fantasy situation to avoid.

Dalvin Cook returned from his rookie-year ACL tear to log 22 touches on 80% of the Vikings’ Week 1 snaps, only to strain his hamstring in Week 2, ineffectively return in Week 4, miss four more games, then finish strong with averages of 104.0 total yards and 5.7 yards per carry over the final five weeks. In the nine weeks where Cook played at least 30 snaps, he averaged four catches per game. Cook has missed 17-of-32 games through two NFL seasons after his medical history was red flagged coming out of Florida State, and durability remains the biggest concern on his 2019 outlook. If we take an injury-agnostic, upside-focused approach, Cook remains one of this year’s most-exciting second-round fantasy picks. The Vikings are philosophically committed to the ground game with a talented defense to foster run-friendly game scripts, and Cook’s plus versatility will keep him on the field whenever Minnesota falls behind.

The Vikings drafted Alexander Mattison with the 102nd pick to replace Latavius Murray in their No. 2 big-back role. Underwhelming on paper, Mattison averaged fewer than 5.0 yards per carry in college and ran 4.67 at the Combine, although he improved to 4.55 at Boise State’s Pro Day. At 5-foot-11, 221, Mattison could threaten Cook’s short-yardage and goal-line work after Murray handled 65 red-zone carries over the past two seasons, including 28 inside the ten. If the Vikings do run as often they hope – they finished second in the NFL in rushing attempts in 2017 and would like to get back there — it’s not crazy to think Mattison could push for flex viability with RB2 upside if Cook goes down again. Mattison must hold off sophomore Mike Boone, who recorded the second-highest SPARQ score among 2018 draft-eligible running backs behind only Saquon Barkley but earned just 13 touches as a rookie.

Minnesota’s 2019 win projection is exactly nine games, a mark they’ve reached just twice in the last six seasons. Last year’s team was every bit as mediocre as its 8-7-1 finish, managing a +19 point differential, dead-even 20-to-20 turnover ratio, and at-expectation 3-2-1 record in one-score games. This year’s schedule strength is middle of the pack, and the Vikings’ throwback run-first philosophy can only be a detriment to their efficiency, particularly behind a still-shaky offensive line. I’d bet the Vikings’ over if their Win Total dropped to 8.5, and their under if it rose to 9.5. There isn’t enough value at 9.0.