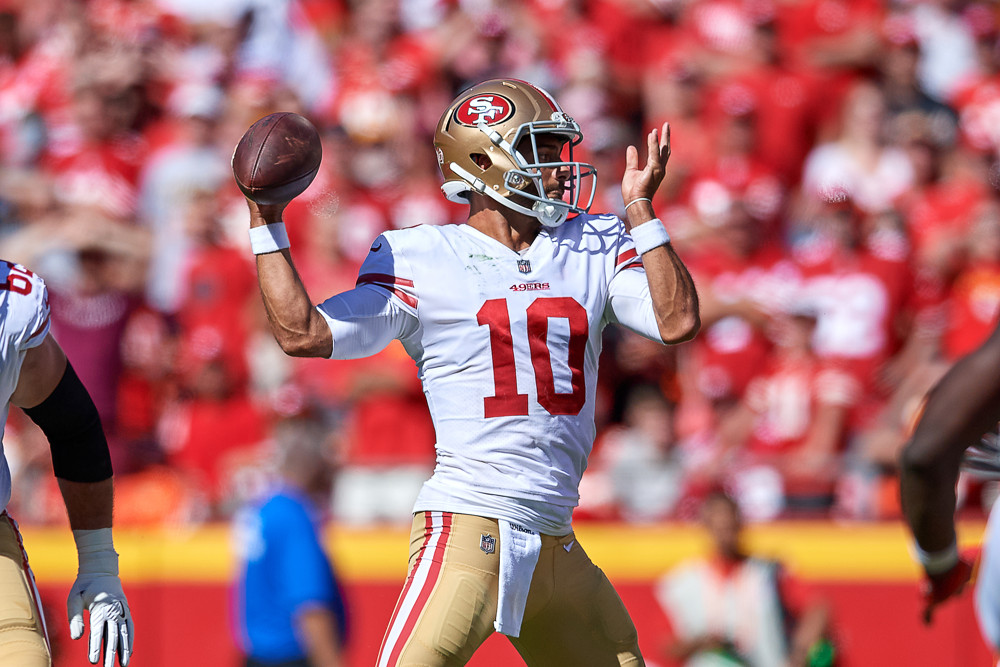 Jimmy Garoppolo enters his second full season as a 49er coming off a Week 3 left ACL tear. He’s now made eight starts for Kyle Shanahan, completing 64.5% of his throws at a sterling 8.5 yards per attempt with an 11:8 TD-to-INT ratio, an additional rushing score, and a 6-2 record. A consensus top-ten QB1 pick by 2018 ADP, Jimmy G’s 2019 average draft slot has sunk toward the 20s, where he is an attractive post-hype selection. He is also an interesting buy-low target in Dynasty. Garoppolo’s career YPA (8.2) and passer rating (97.3) suggest he remains on a positive track, and his supporting cast is ascending with all four offensive line starters returning and George Kittle, 25, Dante Pettis, 23, and Deebo Samuel, 23, comprising a youthful pass-catcher corps under one of the NFL’s premier playcallers.

Dante Pettis will get the first crack at 49ers No. 1 wideout duties after battling foot, ankle, and MCL injuries as a rookie but flashing Keenan Allen-like traits when healthy. In the seven games where Pettis drew at least five targets, his 16-game receiving pace was 59/987/11, averaging 16.6 yards per catch. Pettis’ 1.79 yards per route run easily led the Niners and ranked No. 3 among qualifying rookies behind only Robert Foster (Bills) and D.J. Moore (Panthers). An elite playmaker with the ball in his hands as a Washington Huskie, Pettis scored an NCAA-record nine punt-return TDs in his college career before running 4.47 with a twitched-up 6.87 three-cone time before last year’s draft. Pettis is a prime middle-round breakout candidate with Garoppolo back to enhance San Francisco’s passing-game efficiency.

With Pettis at X, Deebo Samuel will play Z receiver in a slot-flanker role after the 49ers made him this year’s 36th overall pick. Like Pettis, Samuel shined in the return game with four career kickoff-return touchdowns at South Carolina, and Samuel crushed the Combine for 93rd-percentile SPARQ results, including a 4.48 forty at 5-foot-11, 214. Built like a running back on the Percy Harvin-Pierre Garcon spectrum, Samuel’s ADP is far lower than Pettis’, he was taken higher in their respective NFL drafts, and the 49ers’ wideout pecking order remains undecided. Samuel is one of my favorite late-round season-long receiver picks and a recommended Dynasty selection late in the first round of rookie drafts.

George Kittle put the writing on the wall by becoming just the sixth rookie tight end over the previous decade to clear 500 yards, than exploded as a sophomore for an NFL record in receiving yards by a tight end (1,377) and became the first-ever tight end to lead the league in yards after catch (870). This year, Kittle and Travis Kelce encompass their own first tier at the position as focal points of their respective passing attacks. Kelce gets the nod as overall TE1 due to superior quarterback play on a pass-heavier team, but Kittle offers more positive-touchdown regression potential after managing TDs on just 2-of-19 red-zone targets last season. Kittle reached pay dirt on 2-of-16 red-zone targets as a 2017 rookie and scored ten touchdowns on 48 college catches at Iowa (20.8%). His pro TD Rate is an unlucky 5.3%.

Kendrick Bourne, Marquise Goodwin, Richie James, Jalen Hurd, and Jordan Matthews will vie for sub-package playing time. Bourne quietly led 49ers receivers in 2018 snaps (605) by virtue of his reliability and versatility. While Pettis, Garcon, and Goodwin battled injuries, Bourne finished 64th among 96 qualified receivers in yards per route run (1.33). The 49ers intend to reduce Goodwin to a situational deep threat, understandable based on his lack of durability. Goodwin also plans to compete in the 2020 Olympics. Taylor, James, and Matthews are slot options, while Hurd may be most intriguing as an early-college tailback who started over Alvin Kamara at Tennessee, then closed out his career as a slot receiver/short-yardage back at Baylor. Shanahan even hinted Hurd (6’5/226) could play tight end. First-team slot WR Trent Taylor broke his foot in training camp, positioning James, Hurd, and Matthews to directly compete for slot duties. Hurd, by far, has the highest ceiling of the group.

The Niners are still likely to utilize multiple backs with Matt Breida next in line in the competition. A real-life version of Wolverine, Breida gutted out a preseason shoulder separation and Week 5 high ankle sprain to average 5.32 yards per carry and total 1,075 yards from scrimmage in 2018. It is my personal believe that Breida is the best pure runner on the roster. Jerick McKinnon landed a four-year, $30 million deal from the Niners last offseason, only to tear his right ACL last September 1. McKinnon missed spring practices, began training camp on active/PUP, tried practicing twice in early August, then suffered a setback and was shut down for preseason. After McKinnon underwent platelet-rich plasma therapy on the knee, the 49ers were openly noncommittal on his availability for Week 1.

The 49ers’ 2019 win projection is 8.0 games, a mark they haven’t reached since 2014. Kyle Shanahan and John Lynch are entering their third year as San Francisco’s top brass yet have had franchise QB Jimmy Garoppolo available to make just eight starts in 32 games. This year’s team does warrant positive regression after last year’s went 3-6 in one-score games, although the 2018 49ers went 4-12, and we are now searching for a four-game improvement. In a tough NFC West, I’ll stick with the under on 8.0 wins.