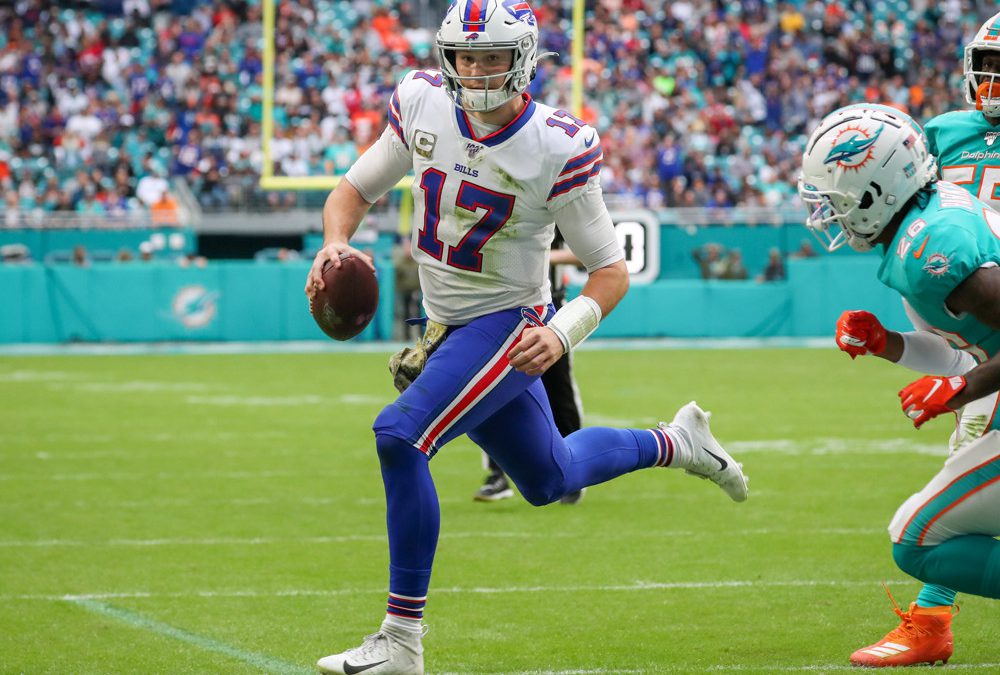 While Brandon Allen deserves credit for handling himself passably in Denver’s win over Cleveland and last week’s one-score road loss to Minnesota, this is a come-to-roost spot for the Broncos’ offense and potential smash situation for Buffalo’s D/ST. 9-of-10 signal callers to face the Bills have managed fantasy scores of QB13 or worse, while Sean McDermott’s defense ranks top ten in sacks (29) and top 12 in QB hits (61). Denver has allowed sacks per dropback at the NFL’s fifth-highest rate (9.0%). And as we’ll explore more shortly, the Broncos’ pass catchers match up exceptionally poorly with the Bills’ stingy secondary. … Denver’s best path toward Week 12 competitiveness is on the ground, where Buffalo has generously conceded 4.58 yards per carry and ten all-purpose TDs in ten games to enemy backs. Phillip Lindsay overtook Royce Freeman as the Broncos’ lead back following Week 10’s bye, out-snapping Freeman 65% to 29% with an 18-to-9 edge in touches. Lindsay also ran a season-high 26 pass routes. He’s an RB2 play with RB1 upside in this plus draw. Freeman has devolved into a low-floor flex option. Due to his hiked usage, I wouldn’t sleep on Lindsay as a low-owned DFS-tournament play. Per Sports Info Solutions, Buffalo has stacked the box with eight-plus defenders on just 0.6% of its 2019 run-defense snaps, while Lindsay has shredded light boxes for 5.9 yards per carry compared to 2.5 YPC when opposing defensive boxes are stacked.

Allen’s 2019 target distribution: Courtland Sutton 17; Noah Fant 15; Tim Patrick 7; Troy Fumagalli 4; Devontae Booker and Diontae Spencer 3; Lindsay and Freeman 2. … With 70-plus yards and/or a touchdown in 9-of-10 games, Sutton continues to show remarkable consistency in the face of severely substandard quarterback play. In Week 12, Sutton is still a high-risk, fade-matchup WR3 play virtually certain to draw shadow coverage from Bills top CB Tre’Davious White. … Isolating Allen’s Weeks 9 and 11 starts, Fant ranks No. 4 among tight ends in both targets (15) and Air Yards (128) in those weeks and has receiving lines of 3/115/1 and 4/60/0 to show for it. Like Sutton, Fant is purely a bet-on-talent and bet-on-opportunity option; not a single tight end has cleared 50 yards against Buffalo this year. … An underrated talent who runs 4.47 at 6’4/208 and led Denver in receiving yards over last season’s final month, Patrick is a stretch-run sleeper who should be rostered across Dynasty leagues. Not including Week 1 where he got hurt against Oakland, Patrick has averaged a robust 63.8 yards over his last five games and logged 72% of last week’s snaps. Patrick should close out the year as Denver’s No. 2 wideout.

Facing a Broncos defense that has permitted just one top-12 fantasy QB1 score on the season in this week’s lowest-totaled affair, expectations should probably be checked for Josh Allen even as he returns from his top-two box-score results of the year. Vic Fangio is too smart a defensive mind to let Allen beat him with the run and figures to focus on keeping Allen confined to the pocket, where Allen is especially turnover propense. Allen earned every-week starter treatment in season-long leagues long ago, but his Week 12 upside is worth questioning. … Although Devin Singletary reasserted himself as Buffalo’s lead back in last week’s win over Miami by out-touching Frank Gore 16 to 12 on a season-high 73% of the Bills’ offensive snaps, Gore’s continued involvement combined with Allen’s rushing-TD threat are putting caps on Singletary’s ceiling. Singletary’s most-appealing Week 12 characteristics are his relative role security and home-favorite advantage in a game Buffalo should control. He’s a classic mid-range RB2.