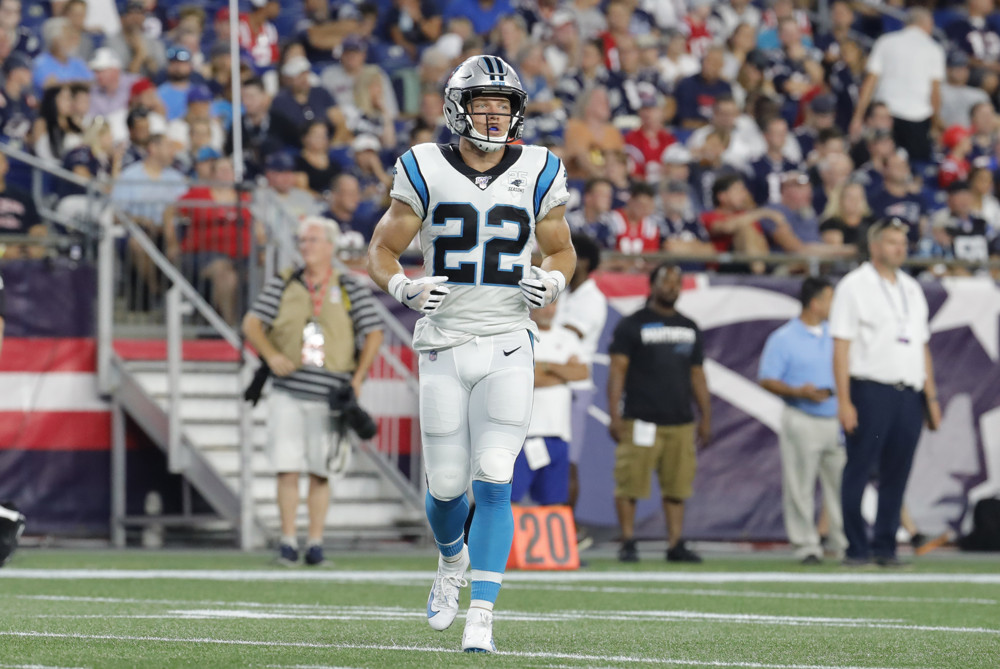 On a quick turnaround following Sunday’s disastrous double-pick-six opener, Jameis Winston travels to face an underrated Carolina defense that revamped its pass rush this offseason and stymied Jared Goff for Week 1’s QB29 finish on an anemic 4.8 yards per attempt, Goff’s second-lowest YPA in 37 games. Winston has top-eight fantasy results in consecutive dates with Ron Rivera’s team, although this may be the most-talented defense of the Rivera era. While this game has enough shootout potential to keep Jameis’ QB1 hopes alive, ultimately there aren’t enough positive data points for Winston to be viewed as more than a boom-bust bet. … Even as Ronald Jones was among Tampa Bay’s few Week 1 bright spots with 93 yards on 14 touches, Jones drew just one target and was out-snapped (32%) by passing-down back Dare Ogunbowale (38%) and Peyton Barber (36%) in a true three-way RBBC. Jones is roster worthy in season-long leagues as an RB4, but he’ll need more than per-touch efficiency to become a bankable flex option before bye weeks set in. In addition to snaps, Ogunbowale led Tampa’s backfield in Week 1 targets (5), and stone-handed Barber drew more passing-game looks (4) than Jones (1), too.

Winston’s Week 1 target distribution: Chris Godwin 6; Ogunbowale, Mike Evans, O.J. Howard, and Breshad Perriman 5; Barber 4; Cameron Brate 2; Jones 1. … No Bucs pass catchers were Opening Day successes because Winston threw for just 194 yards and Tampa Bay committed four turnovers, costing itself drives. … Godwin’s team-high 17% target share still bodes well for his WR2 prospects. Fellow slot WR Cooper Kupp dropped seven catches on these same Panthers in Week 1. … Evans played 87% of Tampa Bay’s Week 1 offensive snaps, but you wouldn’t have known it from watching the game. Listed as questionable with a stomach bug, Evans was a two-catch, 28-yard ghost and will have to get his health right quickly on a short week. Evans was clearly affected by the illness, moving gingerly and wheezing after the whistle. In his last four meetings with Panthers top CB James Bradberry, Evans has sub-par receiving lines of 4/48/0 > 1/16/0 > 6/107/0 > 5/60/0. On the bright side, Carolina is an 80% zone defense, and Evans’ yards per target (8.8 to 9.4) and yards per catch (15.8 to 16.4) both rise versus zone since 2017 (Sports Info Solutions). … Howard’s bad news is he managed 32 yards on five Week 1 targets, lost an end-zone fumble, and dropped a pass that turned into one of Winston’s three picks. The good news is Howard played a career-high 80% of the snaps compared to Brate’s 43%, checks in as Week 2’s No. 4 buy-low tight end in Josh Hermsmeyer’s predictive Air Yards Model, and remains a top-five TE1 play on Thursday night. … Perriman’s Week 1 target (14%) and playing-time (62%) shares were both solid for a third receiver, but he got swallowed up by Winston’s inefficiency. Perriman’s fantasy appeal is limited to one-game DFS slates as a low-floor, big-play-dependent flyer.

Although he didn’t throw two pick sixes, Cam Newton’s opener wasn’t much better than Winston’s with a pair of turnovers and just 237 all-purpose yards against an unimposing Rams defense. Whereas Jameis is worthy of short-term concern, I’m willing to ride it out with Cam against a Bucs defense that showed somewhat well at home versus an in-transition 49ers offense last week but hit Jimmy Garoppolo on just 1-of-28 dropbacks and remains severely talent deficient, both up front and in the back. Cam’s shortcomings were due to come-and-go ball placement, the two takeaways and another by D.J. Moore, plus all three Panthers touchdowns occurring on non-Newton running plays inside the ten-yard line. From a sports-betting standpoint, it’s notable that home favorites are 70-44 all time against the spread on Thursday Night Football. I like the Panthers’ chances of covering and flirting with 30 points in this spot. … Christian McCaffrey ran in two of the aforementioned rushing scores, hitting pay dirt from eight yards out on a direct snap in the third quarter, then jamming in a fourth-quarter goal-line TD. He was Carolina’s most-dominant player against the Rams with 209 yards on 29 touches. A model of consistency, McCaffrey now has 100-plus yards from scrimmage and/or a touchdown in 13 of his last 16 games. Beyond FB Alex Armah’s one-yard TD vulture, no other Panthers back touched the ball on Opening Day. As matchup proof as an RB1 can get, McCaffrey is the single-best fantasy play on the entire Week 2 slate as a home-favorite bellcow with 30-touch upside.

Newton’s Week 1 target distribution: McCaffrey 11; D.J. Moore 10; Greg Olsen 9; Curtis Samuel 4; Chris Hogan, Jarius Wright, and Ian Thomas 1. … Moore’s real-life Week 1 was ugly – he lost a back-breaking fumble to kill a promising drive and didn’t log a single gain beyond 15 yards – but Moore’s target share (26%) was WR1 caliber and well out in front of Samuel, who was pushed in some pre-season circles as something more than Carolina’s No. 2. … One drop and a few errant Cam balls limited Olsen to 36 scoreless yards, but only two NFL tight ends drew more Week 1 targets, and Olsen was on in 94% of the Panthers’ snaps. So long as Olsen’s troublesome feet hold up, he will flirt with TE1 value on these usage rates. He’s a terrific one-game DFS-tournament start on a slate where most people will use O.J. Howard. The Bucs allowed the NFL’s fifth-most yards per game to tight ends in 2018, then gave up eight George Kittle catches in Week 1. Olsen also checks in as Week 2’s No. 1 buy-low tight end in Josh Hermsmeyer’s predictive Air Yards Model. … Olsen did not practice Tuesday due to a back injury, however, and admitted trying to play on a short week “isn’t ideal.” Next up would be promising sophomore TE Thomas, who ranked sixth among NFL tight ends in yards over last year’s final five games and is a 91st-percentile athlete. Thomas would be quite stream-able if Olsen is inactive. … Samuel’s disappointing four Opening Day targets were a reminder of his more-volatile “Alvin Harper” role to Moore’s “Michael Irvin.” Yet 4.31 speedster Samuel remains a playable WR3/flex whose one-game DFS-slate ownership seems likely to be reduced by recency bias.