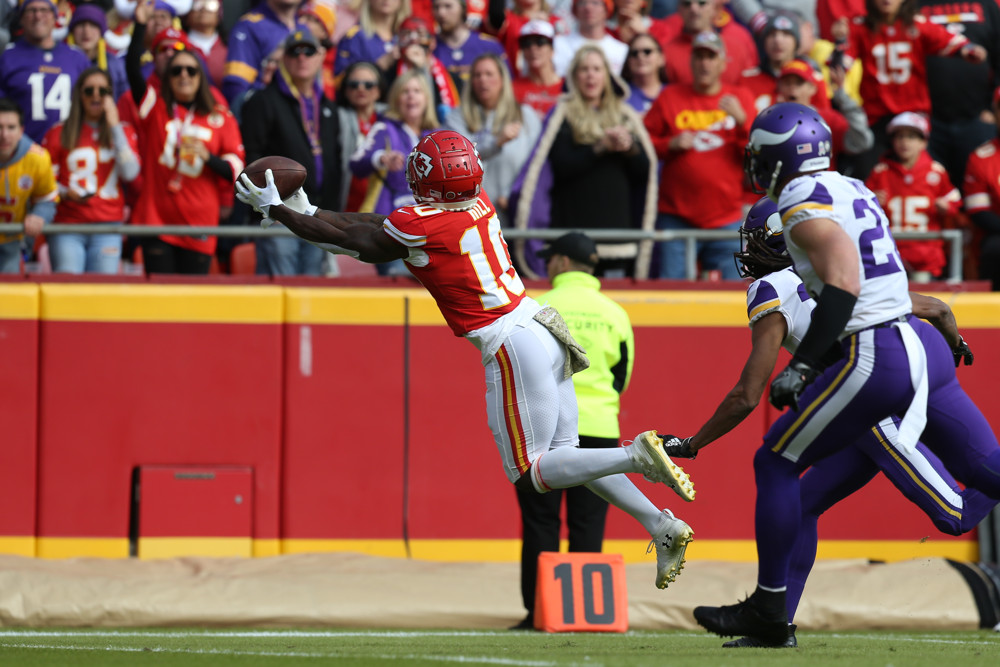 Patrick Mahomes braved last week’s snowy Arrowhead conditions for a vintage Mahomes performance, turning in Week 15’s QB5 fantasy score with his most yards (340) and highest passer rating (115.7) since Week 10 (340), top completion rate since Week 7 (79%), and Mahomes’ most yards per attempt (10.0) since Week 3. While I’m obligated to mention that just 1-of-14 quarterbacks to face Chicago has banked a top-12 fantasy finish, Mahomes is football’s most opponent-proof passer west of Baltimore when he and his supporting cast are at full strength. His pass catchers in better spots than you’d think, I’m riding Mahomes in season-long title week. … Although this is an unimposing draw for Kansas City’s backfield against a Bears defense that’s allowed 13 rushing TDs over its last 10 games, individual Chiefs running back usage prevents any members of its corps from establishing even so much as stable flex value. Week 15 touches were distributed as follows – Darwin Thompson 9, Spencer Ware 9, LeSean McCoy 6 – and Damien Williams (ribs) is practicing as if he has a real chance to return on Sunday night. None of these backs are trustworthy in season-long leagues, and they are dice rolls at best on one-game DFS slates.

Mahomes’ Weeks 10-15 target distribution: Travis Kelce 48; Tyreek Hill 44; Sammy Watkins 27; McCoy 12; Demarcus Robinson 11; Mecole Hardman 8; Darwin Thompson 7; Damien Williams 6; Spencer Ware 4; Byron Pringle and Blake Bell 2. … Down first-team ILBs Danny Trevathan (elbow) and Roquan Smith (pec), the Bears do not present a daunting draw for red-hot Kelce, who is averaging 10.3 targets per game over the last month and enters Week 16 with 60-plus yards and/or a touchdown in seven straight weeks. Only two teams have allowed more tight end receptions (84) than Chicago this year. … The Bears have also shown major vulnerability at cornerback, exploited by Kenny Golladay (4/158/1), Michael Gallup (6/109/0), Davante Adams (7/103/1), Amari Cooper (6/83/1), and Marvin Jones (3/40/1) over Chicago’s last three games. This is a plus spot for Tyreek. … Watkins remains a one-game DFS-slate dart throw only. … Hardman’s target counts are 0 > 1 > 4 > 0 > 1 > 2 over Kansas City’s last six games. He is always a big-play-dependent, one-game DFS-tournament option. … Robinson falls into a similar boat with target totals of 1 > 0 > 2 > 3 over the last month. He’s cleared 60 yards once all year.

Their playoff hopes dashed in last Sunday’s loss at Lambeau, the Bears nevertheless plan to play out the string at full tilt, according to coach Matt Nagy. Even as Chicago’s run game has been broken all season, Nagy’s best chance at spoiling mentor Andy Reid’s chances at a first-round postseason bye is likely to dial up a heavy dose of rushing attempts, attacking a Chiefs defense enemy backs have smoked for 4.93 yards per carry, and keep Mahomes off the field. With 15-plus touches in eight straight games, David Montgomery is a volume-based flex play in line for positive-TD regression without a rushing score since Week 9. … Tarik Cohen long ago lost his season-long-league viability over the course of a forgettable year, but he’s worth consideration on one-game DFS slates coming off a season-high 15 touches and his heaviest playing-time clip since Week 1 (65%). Cohen does his most damage in the passing game, where Kansas City yields the NFL’s second-highest receiving-yards average to running backs (57.5). … Chiefs DC Steve Spagnuolo’s unit has found its stride, holding four straight quarterbacks to fantasy scores of QB18 or worse with point totals allowed of 3 (Broncos), 16 (Patriots), 9 (Raiders), and 17 (Chargers). Mitchell Trubisky remains a two-quarterback-league starter with top-14 finishes in five of his last six starts, but this is not a high-ceiling environment for him, especially since so much of Trubisky’s production has come on the backs of Allen Robinson and Anthony Miller, and the Chiefs are giving wide receivers fits.

Even against a Chiefs secondary permitting the NFL’s fourth-fewest fantasy points to wideouts, Bears alpha dog Robinson is a near-impossible fade with over 100 yards and/or a touchdown in four straight games and an 11-target average during that span. Robinson is an every-week, matchup-agnostic WR2. … Miller has also been a volume monster, averaging 10.4 targets over the Bears’ last five and clearing 75 yards and/or scoring a touchdown in four straight. Despite Sunday night’s hard draw, Miller has earned every-week WR3 treatment based on usage and production as Chicago’s No. 2 pass option behind A-Rob. … Fourth-round rookie Riley Ridley is a deep sleeper on one-game DFS slates after overtaking Javon Wims in Week 15. Taylor Gabriel (concussions) won’t play again, so Ridley projects as Chicago’s No. 3 wideout behind Robinson and Miller. … J.P. Holtz and Jesper Horsted remain in a tight end timeshare, although Horsted ran 35 routes to Holtz’s 17 in last week’s loss to Green Bay. No NFL team has allowed more tight end catches than Kansas City (90), giving Horsted life on one-game DFS slates.