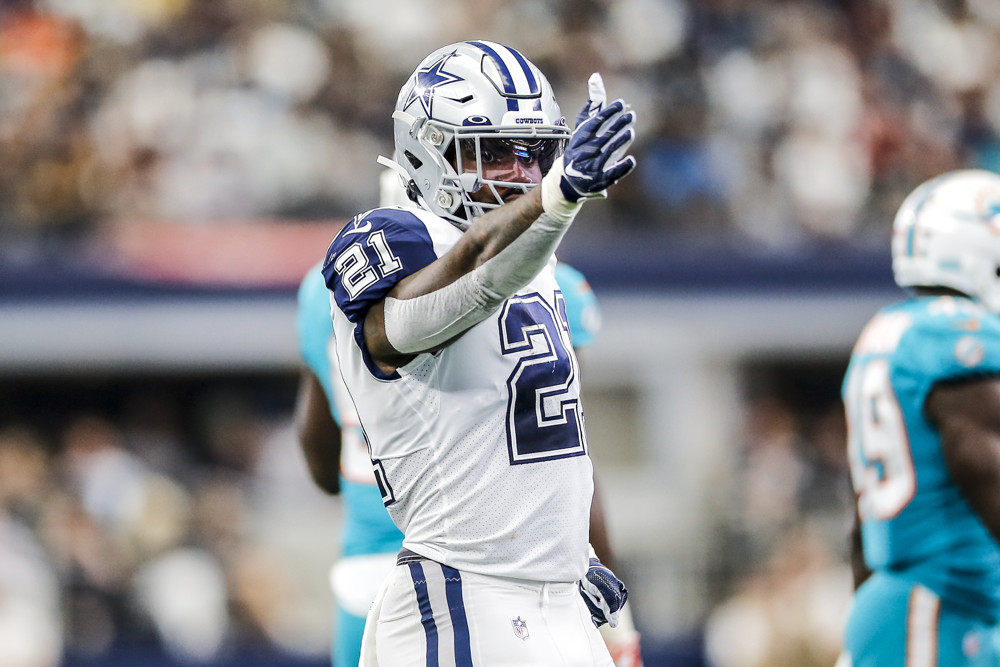 As noted this week by The Athletic’s Ben Baldwin, rookie OC Kellen Moore has morphed the Cowboys into one of the NFL’s five pass-heaviest offenses on early downs, where opponents play with extra run stoppers and fewer coverage defenders and are disadvantaged versus the pass. It’s just one of several competitive edges Moore has implemented to turbo charge Dallas’ attack. No. 3 overall fantasy passer Dak Prescott visits the Superdome to face a swiss-cheese Saints defense that permitted Weeks 1-3 finishes of QB3 (Deshaun Watson), QB9 (Jared Goff), and QB1 (Russell Wilson). … Dallas should be able to impose its offensive will on New Orleans, which has been trucked for 60/297/1 (4.95 YPC) rushing by enemy backs. Looking better every week after his training-camp holdout, Ezekiel Elliott torched Miami for 139 yards on 21 touches in last Sunday’s blowout win, helping to put the Cowboys up before Tony Pollard put the Dolphins away. 7 of Pollard’s 13 carries occurred in the fourth quarter after Dallas had already built a 24-6 lead, although he was active early and remains fantasy football’s most-valuable handcuff with some standalone value. Elliott is an elite RB1 play; Pollard is a desperation flex option.

Dak’s target distribution: Amari Cooper 21; Michael Gallup and Randall Cobb 15; Jason Witten 12; Devin Smith 8; Elliott and Blake Jarwin 7; Pollard 4. … Cooper’s elite route running showed up in a major Week 3 way, taking Xavien Howard to school for 70 of Amari’s 88 yards and both of his touchdowns. Cooper’s game would’ve been even bigger had he not dropped an early 20-plus-yard gain that would have taken him over 100. Cooper seems certain to draw Saints top CB Marshon Lattimore on Sunday night, but that’s not necessarily a bad thing. Lattimore has been victimized for league highs in catches (20) and receiving yards (341) three weeks in. … Cobb finished below 25 yards for the second straight game but lost a 74-yard touchdown to LG Connor Williams’ holding penalty and ran a season-high 30 pass routes. Cobb is very much in play on one-game DFS slates against the Saints’ soft slot coverage, already fileted by Tyler Lockett (11/154/1), Cooper Kupp (5/120/0), and Kenny Stills (3/37/1). … Same goes for Smith, who out-snapped Cobb 92% to 73%, out-targeted him 5 to 4, and out-Air Yardsed him 68 to 43 against Miami. The Cowboys simply didn’t need much out of Smith in a run-dominant affair. Locked in as a full-time receiver in Gallup’s (knee) continued absence, Smith is an exciting post-hype Week 4 buy. … Witten broke off a 33-yard catch in last week’s first quarter, his longest gain since November of 2017. He remains a touchdown-or-bust punt each week with target counts of 4 – 4 – 4.

The Saints pulled their Week 3 upset in Seattle via a special teams touchdown, another on defense, and superstar Alvin Kamara, who literally put the team on his back by accounting for nearly 60% of New Orleans’ yards from scrimmage. Teddy Bridgewater’s average depth of target was a league-low 3.3, and his 19 completions on average traveled just 1.8 yards downfield. This passing-game style can keep Michael Thomas afloat as a WR2 but ruins the fantasy outlooks for Ted Ginn, Jared Cook, and the rest of the Saints’ ancillary pass catchers. Ginn and Cook no longer belong on season-long rosters. … Taysom Hill surprisingly played just four snaps in last week’s victory. I’d expect to see more of him against Dallas and would definitely have Hill on my one-game DFS-slate radar. … When these teams met in Week 13 last year, the Cowboys shadowed Kamara with sub-package CB Jourdan Lewis and held him to 72 scoreless yards on 19 touches. While an improved output is probably likely, it’s worth filing away for small-slate lineup decisions in large-field DFS tournaments, where Kamara is certain to be high owned. … Latavius Murray handled just two Week 3 touches on a season-low 21% playing-time rate and is now a handcuff only. Kamara has become the full-fledged engine of New Orleans’ post-Drew Brees offense.