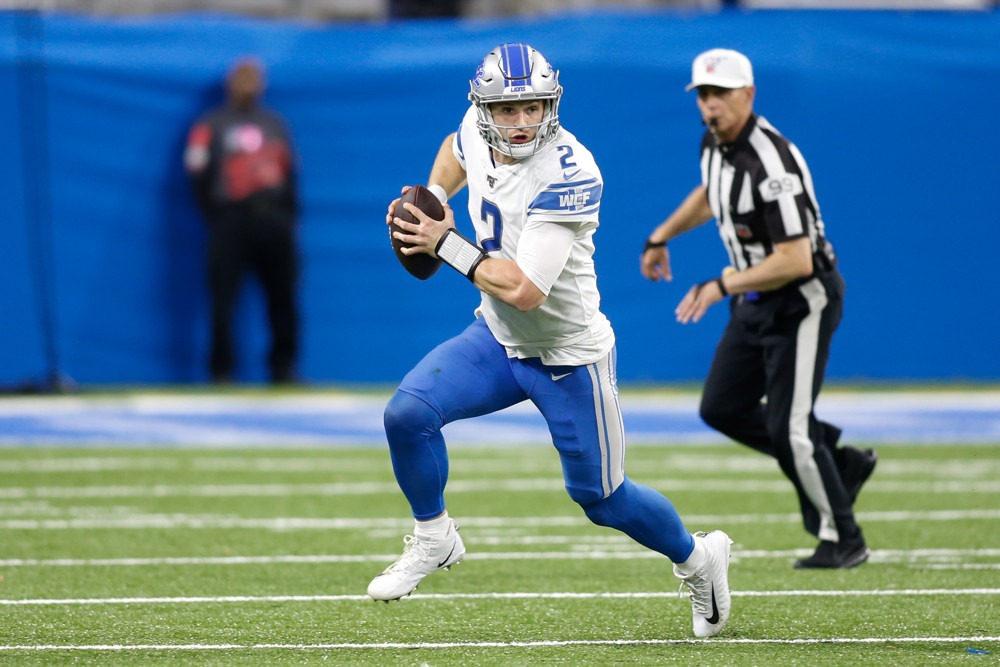 With Matthew Stafford (back) looking likely to miss another game, Jeff Driskel belongs among Week 12’s hottest quarterback streamers after logging QB11 (Bears) and QB5 (Cowboys) fantasy results in his Weeks 10-11 starts and now facing Washington, which has served up a generous 19:9 TD-to-INT ratio and is giving enemy passers clean pockets by ranking 25th in sacks (23) and 29th in QB hits (45). A dangerous runner with 4.56 speed, Driskel has cobbled together a 13/88/1 rushing line in his two starts, raising Driskel’s floor and ceiling as one of this week’s most-underrated quarterback plays. Driskel is equipped with a dynamic supporting cast in an offense that struggles to move the ball consistently on the ground, creating its own pass-funnel scenarios. … Signed off Detroit’s practice squad the day before last week’s game, former Alabama power back Bo Scarbrough immediately overtook Ty Johnson and J.D. McKissic as the Lions’ featured runner with a 14/55/1 rushing line on 50% of the snaps but saw zero targets on nine pass routes run. Johnson touched the ball three times on a 29% playing-time clip, and McKissic was third in line at 23% of the Lions’ Week 11 offensive snaps, touching the ball six times. This is one of fantasy football’s least-attractive backfields, but Scarbrough offers touchdown-reliant flex appeal. Johnson and McKissic are low-floor, PPR-only desperation plays.

Driskel’s 2019 target distribution: Kenny Golladay 14; Danny Amendola 13; McKissic and Marvin Jones 11; T.J. Hockenson 8; Logan Thomas 3; Johnson 2; Marvin Hall 1. … Golladay is coming off a one-catch game, but he leads the Lions in targets, Air Yards (190), and average depth of target (13.6) in Driskel’s two starts. Driskel’s accuracy downgrade from Stafford is an every-week concern, but Golladay’s volume isn’t, and nor is his Week 12 matchup with Washington’s burnable secondary. Always a ceiling play, Golladay has 100-plus yards and/or a touchdown in 7-of-10 games. … Popping in Josh Hermsmeyer’s Air Yards Buy Low Model, Amendola’s Week 12 matchup is pristine. The Redskins have coughed up 57 completions on 68 slot targets (84%) for 656 yards (9.65 YPA) and five TDs, including Jamison Crowder’s Week 11 5/76/1 line. Amendola is a high-end WR4/flex option in PPR leagues. … Jones continues to vastly outkick his touchdown expectations, but he’s not someone to bet against facing the lowly Skins. Washington is allowing the NFL’s seventh-most yards per pass attempt (7.9) and has yielded the league’s 12th-most 20-plus-yard completions (36) despite having faced the fourth-fewest overall attempts (315). … No longer season-long viable, Hockenson is a buy-low target in Dynasty leagues.

Officially committed to Dwayne Haskins for the rest of 2019, the Redskins look to break their pathetic nine-game streak of scoring 17 points or fewer against Detroit’s similarly sad-sack defense, which has yielded top-12 fantasy scores to 9-of-10 quarterbacks faced. Albeit wild and raw, Haskins is two-QB-league playable in a game where he should see less pressure than usual; Matt Patricia’s underachieving defense ranks bottom five in sack rate (5%) and QB Hit Rate (12%) and may be without RE Trey Flowers (concussion). … The Redskins deployed a true three-man RBBC in Derrius Guice’s Week 11 debut; Adrian Peterson led the backfield in touches (11), Wendell Smallwood in snaps (43%), and Guice in production with 69 yards and a touchdown on seven carries plus one catch. Guice’s 45-yard fourth-quarter score occurred on a poorly-defended screen where he ran untouched up the right sideline after Washington was already behind 34-3. Even against a Lions defense enemy backs have touched up for 17 all-purpose TDs and 164.1 total yards per game, every member of the Redskins’ committee is a low-floor flex option. Chris Thompson’s (toe) likely return makes this backfield even more of a Week 12 situation to avoid.

Haskins’ 2019 target distribution: Terry McLaurin 11; Kelvin Harmon 10; Paul Richardson and Trey Quinn 9; Jeremy Sprinkle 8; Smallwood 6; Peterson and Steven Sims 5; Thompson and Hale Hentges 3; Guice and Vernon Davis 2. … McLaurin’s Week 11 could’ve been much bigger than 69 scoreless yards if not for a negated 60-plus-yard bomb early in the game. McLaurin has settled in as a boom-bust WR3 option with Haskins rather than Case Keenum quarterbacking Washington’s offense and is ticketed for Darius Slay’s shadow coverage on Sunday. … With Richardson nursing a Week 11 hamstring injury, the Skins turned to sixth-round possession receiver Harmon across from McLaurin, and the rookie delivered 53 yards on six targets in Washington’s No. 2 role. Richardson is practicing on a limited basis this week. Harmon is worth stashing in Dynasty leagues as McLaurin’s potential long-term bookend. Richardson checked in as Week 12’s No. 6 buy-low player in Josh Hermsmeyer’s Air Yards Model. … Davis (concussion) has resumed practicing and would cut into Sprinkle’s playing time if active versus Detroit.