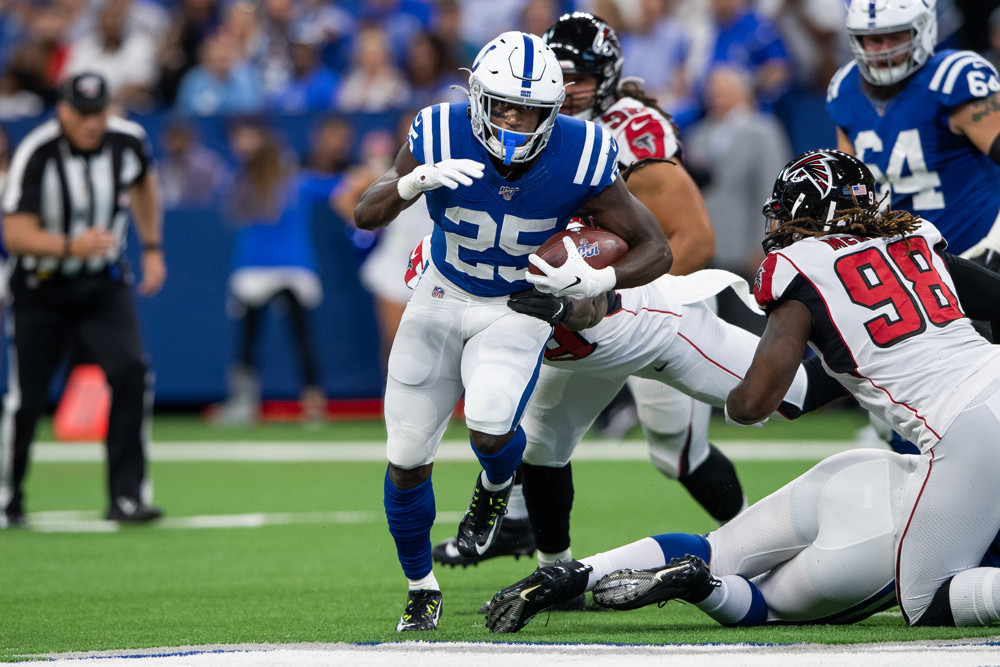 Realizing Kyle Allen isn’t more than their backup quarterback of the future, the Panthers are turning to top-100 pick Will Grier for a Weeks 16-17 evaluation. Grier demonstrated aggressive moxie on the Ryan Fitzpatrick–Tony Romo spectrum at West Virginia, but struggled all preseason (55.7% completions, 2 TDs, 4 turnovers, 7 sacks), was curiously slow to garner starting consideration amid Allen’s struggles, and is a total unknown at this level. The Colts’ D/ST is stream-able here. … The Panthers still have individual milestones to play for, Christian McCaffrey’s run at Chris Johnson’s yards from scrimmage record foremost among them. CMC needs to average an otherworldly 194 total yards over Carolina’s last two games to get there, obscene numbers but not impossible ones for McCaffrey, who’s cleared 190 total yards three times this year and come close on a few other occasions. The Panthers would be smart to focus their efforts to feed him in the passing game, where Indianapolis has coughed up the NFL’s fourth-most running back catches (86). CMC is averaging a moneymaking 11.6 targets over the past five weeks.

Grier’s impact on Carolina’s pass catchers is entirely to be determined, and the Panthers’ emphasis on forcing McCaffrey the ball could conceivably take away from keeping other skill-position players fed. Either way, D.J. Moore is difficult to abandon with 80-plus yards and/or a touchdown in seven straight games, especially against a Colts secondary that was pounded by WRs Will Fuller (7/140/0), Michael Thomas (12/128/1), DeAndre Hopkins (6/94/2), Chris Godwin (7/91/0), Breshad Perriman (3/70/1), Mike Evans (1/61/1), and Justin Watson (5/59/1) in the last month alone. … Curtis Samuel is a much better fade based on his year-long touchdown dependency in a game where the Panthers’ scoring probability likely takes a Grier-induced hit. … Greg Olsen (concussion) is apparently due back to play quite possibly his final two games in a Panthers uniform. It still makes logical sense for the team to continue to give tight end of the future Ian Thomas late-season looks in some sort of a committee.

Committed to finishing as strong as possible instead of giving Chad Kelly stretch-run snaps at Jacoby Brissett’s expense, the Colts’ optimal Week 16 offensive approach is to jam Marlon Mack down the Panthers’ throat. Mack got taken out of last week’s loss quickly as New Orleans built a 20-0 halftime lead, but game script sets him up to bounce back with Indianapolis favored by a touchdown at home in wide-eyed rookie Will Grier’s NFL debut. Jordan Wilkins and Nyheim Hines’ sporadic involvement are threats to Mack’s floor, but his ceiling is high against Carolina’s league-worst run defense, which has been ethered by enemy backs for 87/549/7 (6.31 YPC) rushing in three games since losing NT Dontari Poe (quad) to I.R. … Struggling Brissett has turned in fantasy scores of QB16 or worse in five of his last six starts, lacking Week 16 playability outside of two-quarterback leagues on the run-first Colts.

T.Y. Hilton seems almost impossible to trust after operating as the Colts’ No. 4 receiver behind Zach Pascal, Marcus Johnson, and Dontrelle Inman in last Monday night’s loss to the Saints. Hilton played just 52% of Indy’s offensive snaps and doesn’t have a game above 54 yards or a touchdown since Week 7. … Pascal led the team in Week 15 receiving and looks like the Colts’ lone playable Week 16 receiver. Pascal has settled into the slot, where fellow interior WR Tyler Lockett (8/120/1) busted his slump at Carolina last week, and Pascal can mostly avoid talented Panthers perimeter CBs James Bradberry and Donte Jackson. … Coming off back-to-back disappointing games, Jack Doyle is a wholly usage-driven TE1 option against the Panthers. Doyle is still averaging a robust 7.3 targets in three games since Eric Ebron went on I.R., and only four NFL tight ends have run more pass routes than Doyle during that stretch. Doyle’s DFS-tournament appeal further rose when he popped as Week 16’s lone tight end in Josh Hermsmeyer’s Buy Low Air Yards Model.