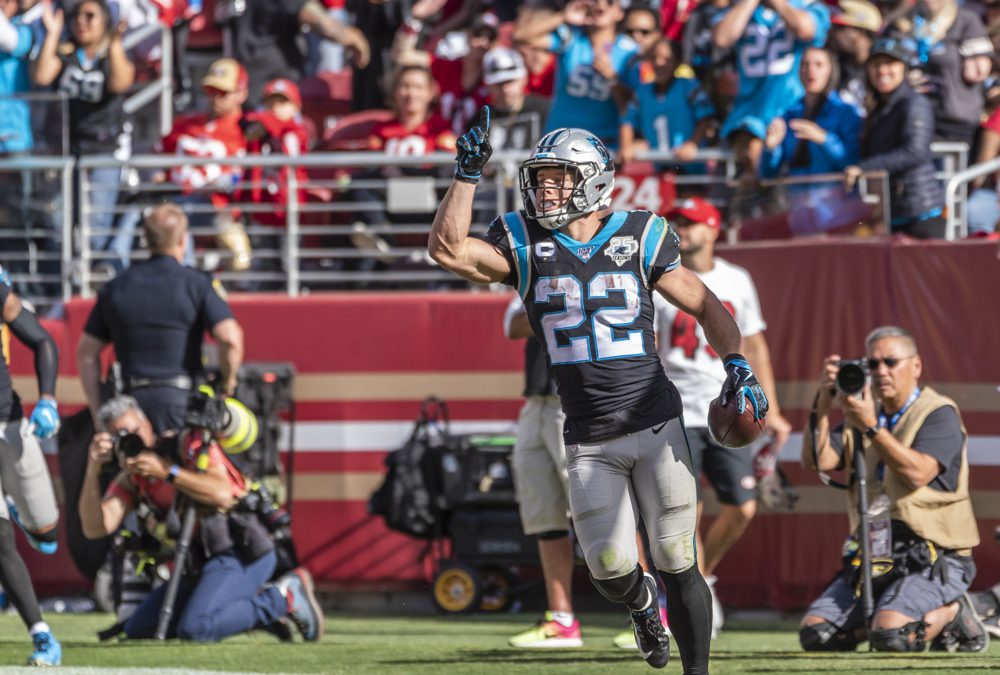 Skewered in run defense ever since losing DT Kawann Short (shoulder) to I.R., Carolina was trampled by San Francisco’s ground game in last week’s blowout loss and has been pounded by enemy backs for 155/761/10 (4.91 YPC) rushing while all told yielding 12 all-purpose TDs to the position through seven games. This plays into Tennessee’s run-first hands featuring Derrick Henry, who has 16-plus touches in 8-of-8 games while ranking fourth in the NFL in carries (151). Dion Lewis has reached five touches just once since Week 1. Henry’s lack of receiving involvement keeps his floor low – he’s averaging exactly one catch per game – but he remains a solid RB2 play in season-long leagues with bankable volume in this plus draw. … A top-12 fantasy passer in each of his first two starts, Ryan Tannehill’s luck is likely to run out at Carolina; just 1-of-7 quarterbacks to face the Panthers has topped QB15 results, while Ron Rivera’s defense ranks No. 2 in sacks (30) and No. 4 in QB hits (54) despite an early bye. Tannehill is 47-of-61 (77%) for 579 yards (9.5 YPA) and a 5:0 TD-to-INT ratio when kept clean but 10-of-17 for 70 yards (4.1 YPA), no touchdowns, and two picks under duress. He’s a low-end two-QB-league play this week.

Even after Kyle Allen threw three picks and took seven sacks in last week’s massacre at San Francisco, the Panthers will stick with Allen against the Titans with Cam Newton (foot) still on the mend. Beginning with most recent, Allen’s last four fantasy outcomes are QB31 > QB15 > QB20 > QB27, while just 1-of-8 quarterbacks to face Tennessee has top-ten results. Allen is a mid-range to low-end two-QB-league play. … In a seemingly impossible spot on the road facing the shutdown 49ers, Christian McCaffrey reproved his matchup-proof ability with 155 yards and a touchdown on 18 touches and is up to ten TDs in seven games. In PPR leagues, McCaffrey is outscoring No. 2 fantasy back Dalvin Cook by a commanding 5.6 points per game. CMC’s spot is better this week as a home-favorite workhorse facing the Titans, who have defended the run stoutly (3.60 YPC allowed to enemy backs) but yielded the NFL’s second-most catches (52) to McCaffrey’s position. As usual, McCaffrey is this week’s No. 1 overall running back play.

Allen’s 2019 target distribution: Curtis Samuel 37; D.J. Moore 34; McCaffrey 33; Greg Olsen 22; Jarius Wright 16. … Carolina’s pass catchers do match up relatively well with Tennessee; the Titans’ secondary is weakest on the perimeter, where RCB Malcolm Butler is beatable and LCB Adoree Jackson (foot) is hurt. Samuel (71%) and Moore (84%) both run most of their routes outside and are WR3/flex playable. Fellow outside WRs Mike Evans (11/198/2), D.J. Chark (4/76/1), Courtland Sutton (4/76/0), John Brown (5/75/0), Odell Beckham (7/71/0), T.Y. Hilton (4/43/1), and Duke Williams (4/29/1) have registered usable fantasy results against Titans DC Dean Pees’ defense. It helps that Moore popped as Week 9’s No. 1 buy-low player in Josh Hermsmeyer’s Air Yards Model. … Olsen has slowed down considerably since his hot start with fewer than 15 yards in three of Carolina’s last four games, but he is still averaging 32.7 routes run, not far off Travis Kelce (33.6) and more than Zach Ertz (32.2). Olsen is a bounce-back candidate against a Tennessee defense permitting the NFL’s ninth-most fantasy points to tight ends.