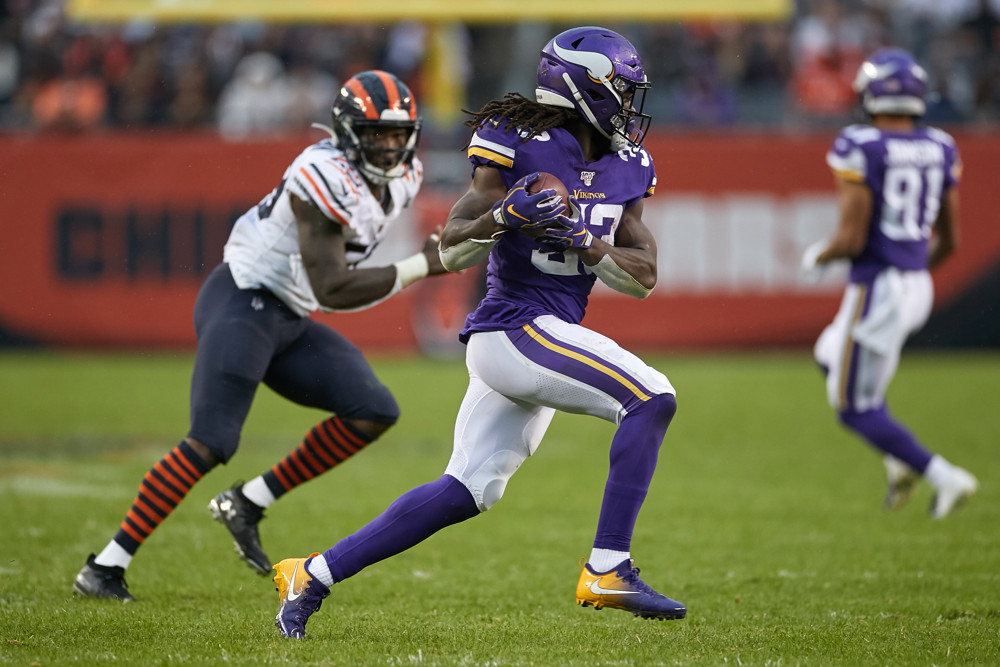 Looking to retake the NFL rushing lead after Christian McCaffrey passed him last week, Dalvin Cook draws a Giants defense dealing with injuries to its top-three inside linebackers after Alec Ogletree (hamstring) and Tae Davis (concussion) missed Week 4 and promising rookie Ryan Connelly tore his ACL against the Redskins. Even as Chicago’s shutdown front stymied Cook all last Sunday, the Vikings fed him 20 touches for the fourth straight week, and Cook compensated in PPR leagues with season highs in routes run (28), targets (8), and catches (6). That passing-game floor will help keep Cook matchup proof all year. … Keep stashing Alexander Mattison in season-long leagues. Cook has struggled to stay healthy in college and the pros, and these consistently massive workloads heighten his injury risk. … Matchup quality hasn’t mattered for Kirk Cousins, who the Vikings’ coaching staff is keeping hidden as much as possible with the NFL’s 25th-most pass attempts (99). Cousins just passed benched Eli Manning (89) and injured Cam Newton (89) in attempts last week. Cousins’ to-date fantasy results are QB22 > QB27 > QB26 > QB25. Regardless of opponent, he’s devolved into a poor start even in two-quarterback leagues.

Cousins’ Weeks 1-4 target distribution: Adam Thielen 22; Stefon Diggs 19; Cook 18; C.J. Ham 8; Kyle Rudolph 7; Irv Smith 6; Bisi Johnson 4; Ameer Abdullah 4; Mattison 1. … While pass volume has become a major concern for Thielen and Diggs, Sunday’s matchup isn’t against a Giants secondary that has been pounded inside and out by Mike Evans (8/190/3), Michael Gallup (7/158/0), Amari Cooper (6/106/1), Cole Beasley (4/83/0), John Brown (7/72/0), and Randall Cobb (4/69/1). … Thielen may get squeaky-wheel treatment after speaking up about his team’s unwillingness to sling it as the run game sputtered in last week’s offense-less loss at Chicago. “You’re not going to be able to run the ball for 180 yards (every week), even with the best running back in the NFL. That’s when you have to be able to throw the ball.” Cousins went so far as to publicly apologize to Thielen on Tuesday. Thielen did log 75-plus yards and/or a touchdown in each of the first three games and should bounce back in this plus draw. Both Thielen and Diggs remain every-week WR2/3s in season-long leagues. I’d take Thielen over Diggs this week in DFS. It can’t hurt that Thielen and Diggs are both popping as top-four buy-low receivers in Josh Hermsmeyer’s Air Yards Model. … The Vikings should consider lowering Thielen and Diggs’ route depths to make life easier on Cousins and their protection-deficient line, which is allowing pressure at the NFL’s third-highest rate. Thielen’s aDOT is way up to 13.4 from 9.5 last year. Diggs’ has soared from 8.6 to a team-high 14.4. Dropping those would give Cousins higher-percentage throws.

After teeing off on Tampa in Week 2 and last week’s above-par effort in a smooth-sailing win over the hapless Skins, Daniel Jones draws his toughest to-date matchup against Mike Zimmer’s Vikings, who’ve contained Aaron Rodgers (QB19), Matt Ryan (QB14), Derek Carr (QB20), and Chase Daniel/Mitchell Trubisky (QB20) while ranking top ten in sacks (11) and No. 7 in yards per pass attempt allowed (5.9). Jones is best viewed as a volatile two-QB-league play and contrarian DFS-tournament option in stacks with Evan Engram. … With Saquon Barkley (ankle) still out indefinitely – one early-week report had the Giants not expecting him back for another 5-7 games – Wayne Gallman will maintain volume-based RB2/flex appeal against the Vikings, who’ve limited enemy backs to 93/343/1 (3.78 YPC) and rank top ten in tackles for loss (24). Although UDFA rookie Jonathan Hilliman was involved for ten carries versus Washington, he managed 3.3 YPC, was not targeted, and touched the ball just once after losing a fourth-quarter goal-line fumble. Hilliman’s struggles reinforce Gallman as the Giants’ clear-cut feature back for the foreseeable future with a realistic chance at matchup-proof usability based on his every-down role.

Jones’ 2019 target distribution: Sterling Shepard 18; Evan Engram 16; Gallman 9; Darius Slayton 7; Bennie Fowler and Rhett Ellison 5. … As Shepard has run 80% of his routes inside, it will be interesting to see whether he moves outside with Golden Tate off suspension. Tate worked in the slot on 62% of his preseason plays. … Either way, Week 5 matchups for all Giants receivers are difficult against the Vikings. Davante Adams is the only enemy wideout to clear 80 yards on Zimmer’s defense through four games, with Allen Robinson (7/77/0), Calvin Ridley (4/64/1), Julio Jones (6/31/1), Tyrell Williams (3/29/1), and Marquez Valdes-Scantling (3/19/0) all held in relative check. I’m downgrading Shepard back into fringe WR3/flex range and using this as a wait-and-see week for Tate, who should be owned in all season-long leagues but approached with caution in his Giants debut. … Engram draws New York’s top pass-catcher matchup; teams targeting tight ends against Minnesota are 28-of-32 passing (88%) for 248 yards (7.8 YPA), including Darren Waller (13/134/0) and Austin Hooper’s (9/77/0) high-production games. Engram continues to warrant matchup-agnostic treatment with the NFL’s second-most yards (331) and targets (37) among tight ends. … As the Giants cut Fowler on Tuesday, Slayton has a real chance to take over No. 3 receiver duties alongside Shepard and Tate with Cody Latimer as his primary competition. A 4.39 speedster who helped key New York’s Week 3 comeback win over Tampa Bay, Slayton should be rostered in all Dynasty leagues.