How to Beat Underdog Pick’em Fantasy 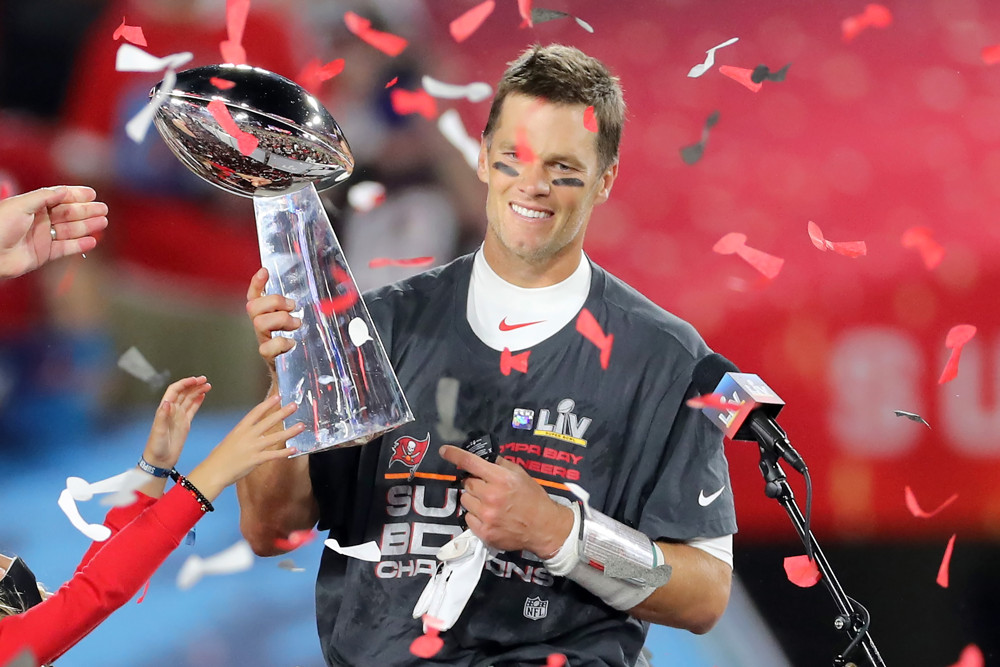 Our friends at Underdog Fantasy don’t just offer Best Ball. They also offer “Pick’em” fantasy contests which require players to make picks on two or more fantasy statistics (ie passing yards, receiving yards, points, rebounds, etc.) to build an entry. With a thorough understanding of the math and strategy of these contests, it is quite possible for a smart player to find an edge and win.

Important! Anyone who purchases our Draft Kit Pro ($49.99) will receive $10 for free in their Underdog account. And if you don’t have an Underdog account yet, use promo code ETR for up to $100 deposit match.

HOW UNDERDOG PICK’EM WORKS
Players build an entry with multiple picks and when you win, rewards you based on how many picks your entry has. The payouts are as follows:

Notes on rules:
1. Underdog mandates that each entry must contain players from at least two different teams.
2. If one of your picks pushes, it is simply removed from your entry and your parlay goes down a leg (e.g. a four-pick entry with a push would become a three-pick entry). That is, of course, unless a push leaves you with only players from one team, in which case your entry is refunded.
3. You are allowed to include picks from different sports in the same entry.

HOW MANY PICKS SHOULD WE INCLUDE IN OUR ENTRY?
The first question we have to answer is how many picks to include in each entry. Let’s take a look at the pick win percentage (and implied site fees) and entry win rate you need over the long term to break even for each type of entry if every pick was independent:

Right off the bat, you can see that we want to mostly focus on entries with either three or five picks. That’s because they require the lowest individual pick win rate needed to break even. They have the lowest implied site fees.

Five-pick entries will bring extreme variance — you can lose 95.0% of the time and still break even! — but have the lowest breakeven pick win percentage. Three-pick entries are a little safer at the expense of a tenth of a percent of breakeven hit rate. Which is preferable?

The short answer: Five picks is likely better for winning players, but there’s no simple one-size-fits-all solution. It depends on a variety of factors, including your expected hit rate, the sport you’re playing, the volume you’re playing, and — the only qualitative factor we’ll mention throughout this article — your ability to handle losses without tilting and trust your process over the long term.

If you have an edge and your goal is to maximize ROI, five picks is the clear answer. While the gap between three and five picks is negligible at a breakeven rate, the difference is amplified as your pick win rate increases. That makes sense if you think about it: You profit five times your risk for a three-pick entry and 19 times for a five-picker. Mathematically, that’s the equivalent of adding two extra -105 picks (51.2% breakeven) to your entry. If you know you have an edge — meaning you can hit at least the breakeven rate of ~55% — that’s a no-brainer from an ROI standpoint. If that didn’t make sense, the graph below illustrates how your long-term ROI increases with more picks if you’re hitting at a high rate: 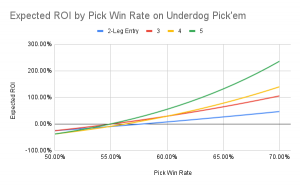 Entries with two or three picks are the safest options, minimizing your losses if you aren’t hitting at a breakeven rate, but larger parlays become optimal ROI-wise if you can win more of your picks. That’s easier said than done — and good luck hitting 70% over the long term — but it’s still critical background knowledge for anyone taking Underdog pick’em seriously.

For most players with a long time horizon, five-pick entries are optimal. However, there is an argument to be made for smaller entrys for higher-stakes players. Underdog currently allows a maximum entry of $500. The max risk on one player at the same time is $750 (not per individual leg but rather on the player overall, so you can not bet Luka Doncic points for $750 and Doncic rebounds for $750). To mitigate variance and potentially increase how much money you are entering, you can spread that among multiple entries.

Say you’re a high-stakes player who sees values in six spots today. If you’re only doing five-pick entries, you might do one or two $500 entries (the second one would either have to have overlap in 4/5 spots, or you’d have to add other picks that you don’t see as much value in. Which, considering that the average juice to increase from three picks to five picks is -105, is actually completely reasonable).

If you hit 56% and stick with five-picks entries, you are risking $500 or $1,000 on the day with an expected ROI of 10.1%. That’s one option. Another option is to make four three-pick entries with no overlap (and, as such, significantly less variance, although that should negate itself in the long run). Your expected ROI is just 5.4%, but you can theoretically risk $1,500 if you want to.

That’s an overly specific example — maybe in the first scenario you make one $500 five-pick entry and use your remaining $250 per player in smaller entries with your sixth value spot — but the overarching point is that we want to maximize profit, not ROI. In the majority of cases, that’s going to mainly involve five-pick entries, but there is slightly more nuance to it than meets the eye.

The other variable is your own personal ability to withstand losing streaks without tilting and/or doubting your process. With a breakeven entry win rate of 5.0% on five pick entries, you’re going to lose a lot more than you win. Even if you hit at 60% on individual picks — which is really good — you’re only winning 7.8% of the time. If you’re the type of person who tilts hard during losing streaks, it’s likely wiser from a financial and mental perspective to stick to three-leg parlays.

We’ve mostly talked about three- and five-pick entries. Four pick entries are also viable (and becomes +EV compared to three if you’re hitting at least 60%), but you might as well do five if you’re choosing to embrace the math and accept the variance because the expected ROI is so much higher.

The reason I bring this up is to point out that we have not discussed two-pick entries. The reason is simple: They are bad value. With -136 implied site fees and the lowest expected ROI for any winning player, there is no reason to make two-pick entries. If you aren’t sure whether you’re a winning player and want to keep it safe, go with three-pick entries. Three picks boast a superior ROI to two at every pick win rate above 50%, and there’s no reason you should expect to get fewer than half your picks right in the long run.

This also means we generally want to avoid being forced into a two-pick entry. If you have a three-pick entry with one prop that could push, it may be wise to find another value spot so that you don’t end up playing the two non-push-able picks at -136 instead of the -122 you were trying to pick.

That was a lot of words about how many picks to include in your Underdog pick’em entry — not exactly the most enthralling topic in the world. Let’s quickly sum up what we learned:

Now that we know how many picks to include in our entries and the factors that impact that decision, let’s quickly run through some tips on how to identify winning picks. At the end of the day, you can follow the math from the previous section all you want, but none of that matters if you’re not winning your individual picks at an above-breakeven rate.