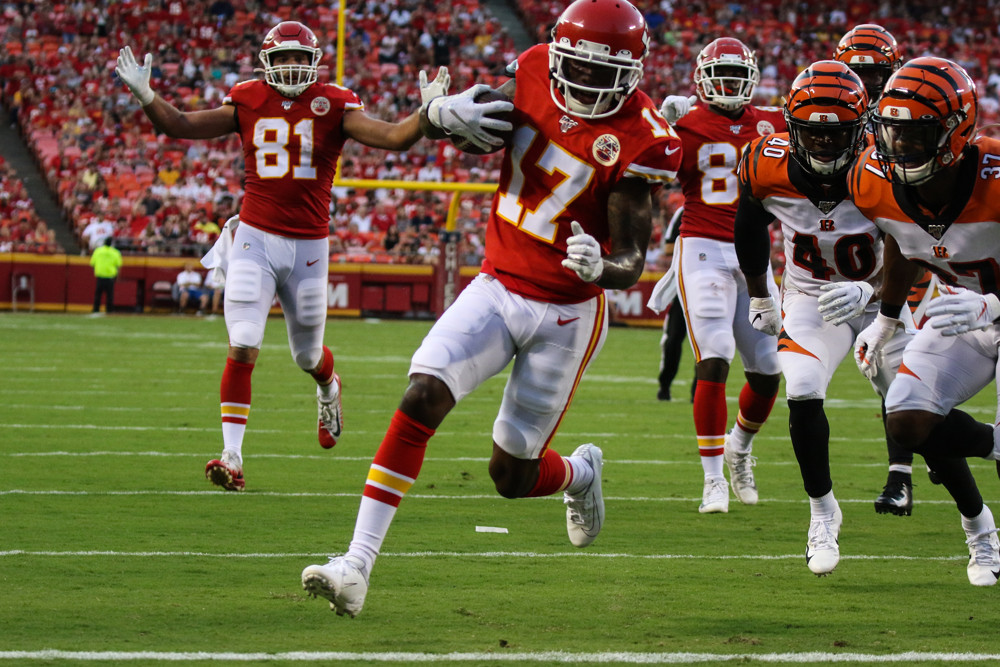 The goal of this article isn’t to “tout” picks, it’s to help you develop your own process by showing you mine. You may not be able to get these lines at your book. The general idea is simple: Take a projection you’re confident in and compare it to the available line.

Notes: The Week 1 box score showed Mecole Hardman with zero catches on one target despite playing 53 snaps. However, the Chiefs had that game under control for most of the day and Hardman was surprisingly thrust into action via Tyreek Hill’s shoulder injury. This week, Andy Reid has a week to scheme ways to get the 4.33 speed Hardman the ball and let him do work, just like he did in preseason when Hardman went 6-88-2 on 78 snaps. This line and the yardage line below it do not reflect Hill’s injury and Hardman’s role in a very plus matchup against the Raiders.

Notes: Obviously the above Hardman bet is highly correlated with this one. In most outcomes I am likely to either win both or lose both. But with limits relatively low on props, if I think a book is wrong on a player’s role I will happily bet both.

Notes: Sterling Shepard (concussion) is out and Golden Tate remains suspended. Cody Latimer is in line to start opposite Bennie Fowler, but note that Latimer (calf) is questionable. This sets up a freeroll of sort for us –if Latimer ends up inactive then the bet is canceled. If he plays one snap and aggravates the injury, or is ineffective due to the injury, or simply is ineffective because he’s Cody Latimer playing with Eli Manning, then we get paid. I want to be high on the Bills defense and low on Eli Manning anyway.

Notes: AJ Brown only saw four targets last week and played just 25 snaps overall, but he ran a route on 20 of Marcus Mariota’s 30 dropbacks. The Titans won that game 43-13, meaning Mariota only had to throw 24 times and completed just 14 passes. Although the Week 2 game vs. Indy does not project as a shootout, Brown’s natural talent and role is that of a 1A wideout. Yet his prop is 14 yards smaller than Corey Davis’

Notes: Moncrief racked up 10 targets in Week 1 but ended up with an unfathomable seven yards. The Steelers — and most importantly Ben Roethlisberger — have shown confidence in Moncrief bouncing back and he’ll remain the WR2 opposite Juju Smith-Schuster. In a game we think has a good chance to shoot out, Moncrief’s prop here reflects last week more than his overall spot.

Notes: TJ Yeldon played just two snaps last week, leaving all the pass-down work to Singletary. He racked up five catches, continuing the role he played in the preseason when he caught six balls. It’s a tiny sample, but Singletary’s catch per snap rate is even higher than Austin Ekeler’s. Obviously the line has not adjusted here and there’s uncertainty considering it’s the rookie’s second game. But the Bills should take a pass-centric approach against a Giants team which can’t rush the passer.