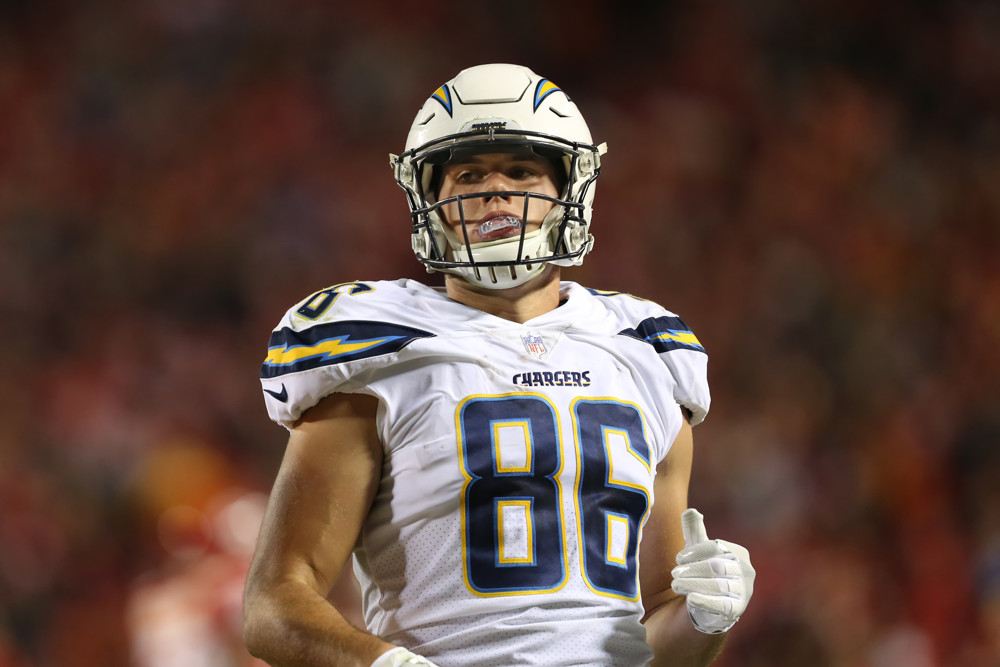 However, player props are extremely beatable. As hardcore fantasy players, we are actually putting more time and thought into player outlooks than the oddsmakers. And since the limits on these player props are typically quite low, a lot of books don’t mind leaving up some soft lines. It’s essentially advertising to get people into their book. Don’t use player props as a guide for your DFS selections. Instead, we should be seeking out soft player props to bet.

Notes: I want to be high on Hunter Henry because I truly believe he has difference-making talent. But this is a tough spot for him. Sunday’s game at Tennessee projects to be among the slowest-paced on the week, as noted by Thorman. Low play volume is a problem when the Chargers are forcing touches to Melvin Gordon, plus trying to feed Austin Ekeler, Keenan Allen and Mike Williams as well. Henry’s prop here is inflated by his one-game eruption on national TV in Week 6. That game was a massive outlier game script that benefitted him perfectly.

Notes: Dalvin has averaged 3.8 receptions per game on the year – but he’s only played on 67% of the snaps. A big reason for that low snap count is blowouts as the Vikings have easily handled the Falcons, Raiders, Giants and Eagles. A road division game against the Lions is a spot we can project Cook closer to 80% of the snaps and therefore well over his current receiving averages. As noted by Silva in Matchups, the Lions are allowing the third-most receiving yards per game to opposing RBs.

Notes: Teddy goes to Chicago Sunday without Alvin Kamara, Jared Cook and Tre’Quan Smith. We can expect a very conservative gameplan which relies on the Saints very good defensive and offensive lines. What we should’ve expect is a shootout that involves high efficiency or volume from Teddy Bridgewater. I was able to bet this before the Kamara/Cook news became official, but anyone following closely knew there was a really good chance those guys would sit.

Notes: As I noted in last week’s article in the Cooper Kupp notes, I’m typically going to bet unders on wide receivers yardage prop in the 90s. The range of outcomes is simply too wide. Thomas’ massive role in this Saints pass game is one spot I’m hesitant, but I don’t think Alvin Kamara being out is good for MT. This Bears unit can sell out to stop Thomas, who was already a reasonable under bet here even if Kamara played. I’d also note that by playing both unders on Teddy Bridgewater and Thomas, I’m essentially getting more action on a highly correlated bet. In a very low-liquidity market like player props, it’s a way to get around limits.

Notes: This is a lot of juice to lay, but a nearly 15% difference in line vs. projection on an under is something I want to be on. Particularly when I have the chance to get money against a Redskins team which severely lacks talent on the offensive line, won’t have passing back Chris Thompson and is facing a fearsome 49ers defensive line.

Notes: There’s a bit of market resistance here as the over was at -118. I suspect that was due to people speculating on absences of Amari Cooper and Randall Cobb. But I expect both of those guys to play, leaving Witten’s already meager target share squeezed even more. Note that Witten has only topped 37.5 yards in three games this year – and two of those were against the Jets and Dolphins. In the Jets game Amari also left in the first quarter and Cobb didn’t play.

Notes: By making under bets against both Witten and Jarwin, I’m getting correlation in my favor. In other words, if Witten ends up going over it’s really unlikely Jarwin goes over. And there’s still a really good chance both stay under based on raw projection. Again, Amari Cooper and Randall Cobb healthy will squeeze Jarwin’s already meager target share.