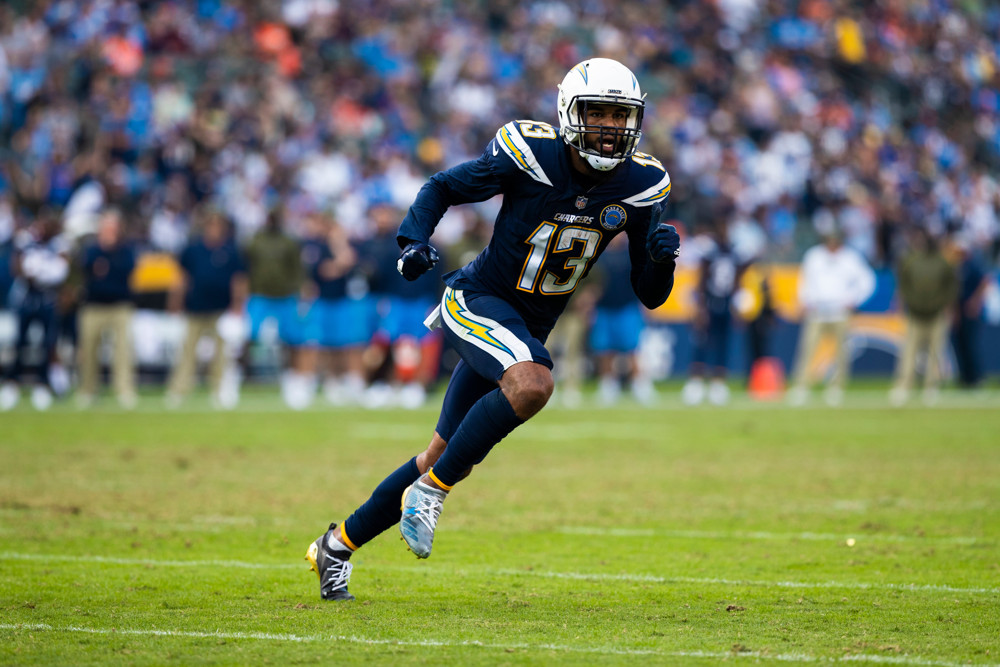 Philip Rivers enters his 16th season coming off an 11-year high in touchdown rate (6.3%), nine-year high in yards per attempt (8.5), and six-year high in QBR (71.2). In other words, he’s still playing his best ball approaching age 38. Rivers’ TD Rate is destined for 2019 regression, however – his career TD Rate is a full percentage point lower than last year’s clip – and he adds nothing with his legs, capping Rivers’ ceiling as a one-dimensional pocket passer on a balanced team with arguably the AFC’s most-talented defense. The Bolts have finished higher than 15thin pass attempts just once in Ken Whisenhunt’s four years as coordinator. They’ve never finished top 12 in offensive snaps on Whisenhunt’s watch, and last year ran the league’s fifth-fewest plays. Rivers is a floor-driven QB2 pick lacking high-scoring upside.

Keenan Allen continued to shed his injury-prone label by playing in all 16 games for the second straight season and finishing 12thin the NFL in catches (97). Only Michael Thomas(229), DeAndre Hopkins(211), Antonio Brown(205), Adam Thielen(204), and Julio Jones(201) have more receptions than Allen’s 199 in the last two years. Exactly 90 have come in the slot (45%), where Allen runs higher-percentage routes than perimeter-oriented No. 1 receivers. Still only 27, Allen remains squarely in his prime after finishing No. 6 among 96 qualified wideouts in yards per route run (2.50) last year. Allen just missed out on my first tier of wide receivers due to Mike Williams’ emergence as a touchdown hog and Hunter Henry’s return, expanding the Chargers’ passing-game distribution. Still, Allen is a consistent year-over-year PPR WR1 who has averaged 9.5 targets, 6.6 catches, and 82.4 yards per game over the past four seasons.

Mike Williams shook off an injury-ruined rookie year to break out for ten touchdowns as a sophomore. He averaged only 4.1 targets to Allen’s 8.5, however, and scored 16% of his PPR points in a Week 15 shootout upset of the Chiefs where Allen left after only 17 snaps, and neither Melvin Gordon nor Austin Ekelerwas even active. Tyrell Williams’ departure frees up 65 targets but is mitigated by Hunter Henry’s return and Travis Benjamin’s expected-increased role. Absent an Allen or Henry injury, Williams’ ceiling is limited as a largely touchdown-reliant role player in a low-volume passing attack. Still a potentially high-scoring WR2/3 with Alshon Jeffery-like physical traits, Williams has double-digit TDs in two of his last three football-playing seasons, and his ADP hasn’t quite jumped the shark yet.

Hunter Henry’s 2018 was washed out by a right ACL tear on the first day of OTAs. Although he made no real impact, it was promising to see Henry get clearance to play 14 snaps in Los Angeles’ playoff loss to the Patriots. Full go for OTAs, Henry’s breakout potential in his contract year is obvious on a Chargers team that finally turned the page on Antonio Gates and is missing over 100 targets from last year’s team. In Henry’s last season (2017), he finished No. 2 among tight ends in yards per route run (2.05). Among tight ends with at least 50 targets over the course of 2016-2017, Henry’s 9.19 yards per target were third most in the league. A highly efficient pass catcher whose plus blocking will keep him on the field as an every-snap player, Henry is my TE6 behind Travis Kelce, George Kittle, Zach Ertz, O.J. Howard, and Evan Engram.

Travis Benjamin signed a restructured one-year, $4 million deal after a sub-200-yard season wherein Benjamin suffered a Week 1 foot injury that lingered throughout the year, costing him four games and almost all effectiveness. Benjamin was far better during the 2016-2017 seasons, averaging over 15 yards per catch and over nine yards per target in each year. With Tyrell Williams gone to Oakland, Benjamin has a shot at an increased role if he can hold off smallish slot type Artavis Scott. That would put Benjamin on the especially deep-league and best-ball radar.

In July, Melvin Gordon and his agent went public with a holdout threat accompanied by a trade demand if the Chargers don’t extend Gordon’s contract. Gordon is owed just $5.6 million in the final year of his rookie deal after ranking third among running backs in total yards over the past three seasons (4,372) behind only Ezekiel Elliott (5,247) and Todd Gurley (5,136). As the first few days of Chargers camp passed, Gordon’s threats sounded serious enough that I reacted by dropping him from RB6 to RB12 with increasing risk of missing regular-season games combined with running behind one of the NFL’s weakest offensive lines that may be without LT Russell Okung (pulmonary embolism). Gordon also missed four 2018 games and was hobbled in several others by an early-season hamstring strain and late-season MCL sprains in both knees. I dropped Gordon to RB23 in mid-August.

Austin Ekeler became a far more interesting 2019 fantasy commodity due to Gordon’s holdout after logging 17, 18, and 17 touches in the three 2018 games in which Ekeler played but Gordon did not. Hardly a bellcow archetype at 5-foot-9, 199 to Gordon’s 6-foot-1, 215, Ekeler nevertheless has earned Rivers and the coaching staff’s trust while demonstrating undeniable explosiveness. Over the past two seasons, Ekeler is the only running back in the entire NFL to log at least 200 touches while averaging over 5.0 yards per carry and 10.0 yards per catch. Also worth mentioning is 2018 seventh-rounder Justin Jackson, who held his own with 85 yards and a touchdown on 19 touches in last year’s Week 15 Chiefs game after graduating from Northwestern as the school’s all-time total-yardage leader.

The Bolts’ 2019 win projection is 9.5 games, a number they’ve topped just once in the last nine seasons. Although last year’s team went a fortunate 6-1 in one-score games, they earned it with a +99 point differential amid myriad defensive injuries, where DE Joey Bosa, ILB Denzel Perryman, RCB Trevor Williams, and WLB Kyzir White combined to miss a whopping 36 games. With all back healthy, the Chargers boast arguably the AFC’s premier defense and are rock solid offensively outside of Gordon’s holdout and a sub-par offensive line. Facing the league’s eighth-softest schedule based on Opponent Win Totals, I like the Chargers’ chances of winning double digits for the second year in a row.