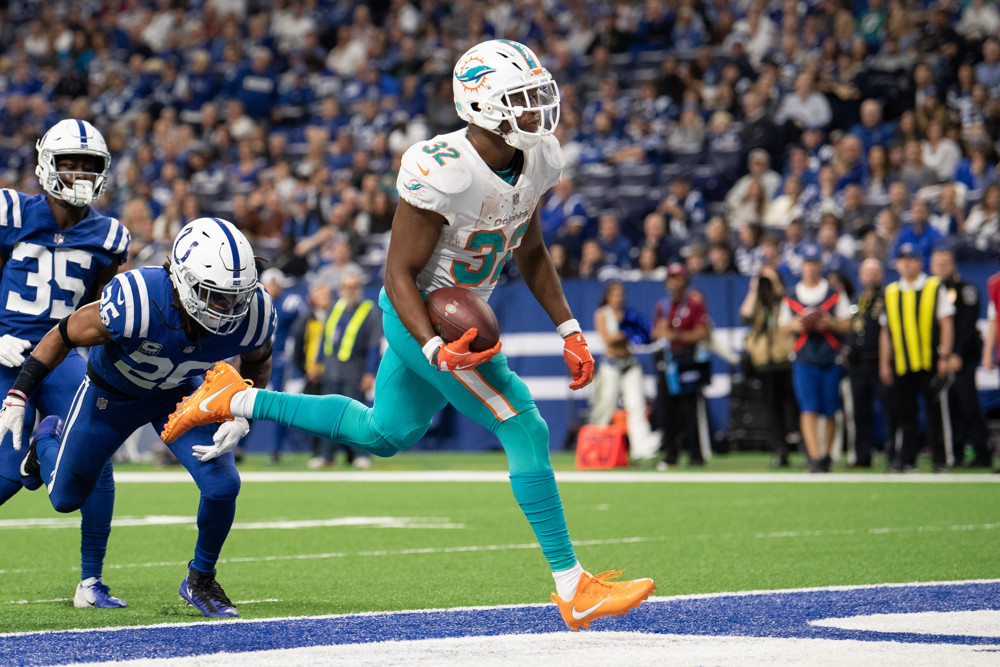 Dolphins Passing Game
Ryan Fitzpatrick and Josh Rosen will vie for snaps on a full-rebuild Dolphins team patterning itself after the Houston Astros and Cleveland Browns, which both successfully made short-term sacrifices in favor of long-term gains. Rosen is going to play – he was a top-10 pick who made 14 rookie starts and cost Miami this year’s 62ndoverall pick – but Fitzpatrick is the Week 1 favorite as the superior player at present. Based on the Dolphins’ organizational state and philosophy and ex-Patriots WRs coach Chad O’Shea’s utter lack of coordinator experience, there’s no telling what Miami’s offense will look like behind a line in-the-trenches expert Brandon Thorn rates worst in the league. Perhaps Fitzpatrick will emerge as a DFS YOLO option, but otherwise this is a situation to avoid outside of deep two-QB leagues.

Albert Wilson began his first Dolphins season on a tear, accounting for five TDs and pacing for 989 total yards through six games before suffering a season-ending hip injury in Week 7. Wilson did not require surgery and was cleared for the start of camp. Versatile enough to align anywhere on the field, take handoffs, and even throw touchdown passes, Wilson is a candidate to lead this year’s Dolphins in targets and smash his double-digit-round ADP. Kenny Stills is in a similar spot with effective track records as both a perimeter and interior receiver who can provide spiked weeks. Neither is an especially attractive season-long selection in a wayward passing game, but both are viable WR6/7 picks in best-ball drafts.

DeVante Parker, Jakeem Grant, Allen Hurns, andPreston Williams round out Miami’s low-intrigue wideout corps. The Fins re-signed underachiever Parker to an incentive-laden two-year, $10 million deal after he managed a career-low 309 yards in 11 games, battling a broken finger in training camp, an early-season quad injury, and a later-season AC joint sprain in his shoulder, which all told cost Parker five games and his effectiveness in several others. Still only 26, talent has never been an obstacle for Parker, who has drawn more criticism for his work habits and consistency. At 5-foot-6, 165, Grant’s ceiling is a gadget player, and he is coming off calf surgery. Williams is arguably the highest-upside receiver in Miami. A five-star recruit to Tennessee, Williams landed at Colorado State after multiple failed drug tests and was disinvited from the Combine for a 2017 domestic violence arrest. He destroyed in his lone full college season (96/1,345/14) and is the biggest wideout on Miami’s roster at 6’4/211.

Mike Gesicki’s rookie season was an abject disaster, earning just 43% of Miami’s offensive snaps and playing less and less as the year progressed. The 42ndpick in last year’s draft, Gesicki was believed to be a front office-driven pick that irked then-coach Adam Gase. As Gesicki never offered a modicum of blocking ability, he bulked up to 253 pounds after playing his first season at 240 and presumably gets a clean slate under Miami’s new coaching regime. While Gesicki elicits troubling Coby Fleener vibes as a finesse tight end who may forever lack three-down ability, he does get a pass for struggling at the NFL’s most-difficult position as a rookie. He looks like a boom-bust TE2/3 with in-season streamer potential.

Dolphins Running Game
Kenyan Drake enters his contract year in his first non-Adam Gase season projected for a career-high workload when his previous best was 173 touches, set last year. Although Drake’s all-purpose dynamism and big-play ability aren’t in doubt – he’s one of just seven NFL players over the past three seasons to top 4.5 yards per carry and 8.0 yards per reception on 300-plus touches – “little things” like Drake’s pass blocking and down-to-down consistency have prevented him from becoming a lead back from college to the pros. Dating back to high school, Drake has gone seven straight seasonswithout reaching 135 carries in an individual year. Drake’s talent has never been in doubt, however, and this year’s Dolphins are going to play from behind. Drake is an underrated PPR RB2 with significantly less non-PPR appeal.

Sophomore Kalen Ballage and rookie Myles Gaskin pose the top threats to Drake. Ballage recorded 2018’s fourth-best SPARQ score among drafted running backs with 4.46 speed at 6-foot-2, 228 and parlayed 32 touches into 218 yards and two TDs over Miami’s last three games. An underachiever at Arizona State, Ballage’s antithesis is Gaskin, who rushed for 1,000-plus yards in all four seasons at Washington but managed a 40th-percentile Speed Score and lasted until the 234thpick in April’s draft. Ballage opened camp running ahead of Drake on the depth chart and handling goal-line work, while the Dolphins are missing the NFL’s fourth-most carries from last year’s team. As of late July, Ballage was being drafted in the 60s among running backs. He’s been in the early-to-mid 40s for us the entire time.

2019 Vegas Win Total
The Dolphins’ win projection opened at a league-low 5.0 games and was bet down to 4.5 by sharp observers aware of Miami’s intention of sacrificing any hint of short-term success in favor of long-term gains. The Fins went a wildly-unsustainable 20-6 in one-score games under ex-coach Adam Gase and are due for negative regression. They also face this year’s 11th-hardest schedule based on Opponent Win Totals and are changing schemes on both sides of the ball. In general, winning five games in the NFL is not tough to do. But I don’t think this year’s Dolphins are a good bet to get there. I’m taking the under.