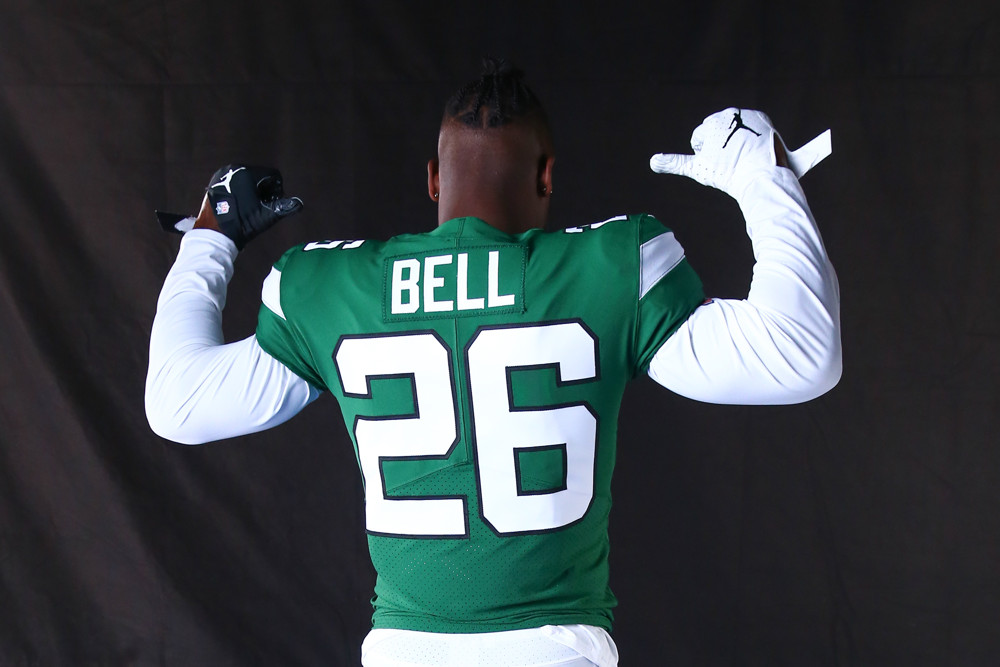 Sam Darnold’s rookie year was up and down but all in all promising, averaging 7.52 yards per attempt over his first six starts, bottoming out in Weeks 7-9 as his protection failed and receivers fell victim to high ankle sprains, sitting out three games himself with a foot injury, then returning for a white-hot finish as Darnold led the NFL in QBR in Weeks 14-17 with a 7.45 YPA, 64% completion rate, and 6:1 TD-to-INT ratio. Although new coach Adam Gase was once tabbed a “quarterback whisperer,” he never coaxed a leap out of Ryan Tannehill in Miami and consistently ran one of the NFL’s slowest-paced offenses, limiting box-score production. In Darnold, Le’Veon Bell, Robby Anderson, Chris Herndon, Jamison Crowder, and Quincy Enunwa, Gase will be working with far more talent in New York, while practice reports indicate Gase is emphasizing a faster pace. Gang Green’s weak offensive line looms as a concern, but Darnold offers year-two breakout potential as an upside QB2.

The Jets handed Jamison Crowder a three-year, $28.5 million deal to give Darnold a safety valve at slot receiver, where Crowder ran over 75% of his routes in four years with Washington. Before his 2018 season was derailed by a high ankle sprain, Crowder looked to be on an upward trajectory with career highs in yards (847) and touchdowns (7) in 2016 and a Redskins-best 66/789/3 receiving line in 2017. A quick-twitch separator on the interior, Crowder has an outside chance to lead the Jets in targets as a worthwhile WR4/5 pick in PPR leagues.

Quincy Enunwa passed on a chance to test free agency by signing a four-year, $36 million extension shortly after last season. Enunwa’s 2018 started fast as New York’s featured receiver in September, averaging 9.0 targets for 69.5 yards in Weeks 1-4. He went catch-less on five targets in Week 5 while battling hip and hand injuries, and a Week 6 high ankle sprain ruined the rest of his year. A plus-sized (6’2/225) possession receiver best deployed in the middle of the field, Enunwa averaged 1.75 yards per slot route but only 1.07 YPRR on perimeter plays last year. With Anderson likely entrenched as Gang Green’s go-to outside receiver and Crowder and eventually Chris Herndon commanding passes inside, Enunwa is at risk of getting lost in the shuffle as a lightly-used role player barring a sizable Darnold leap.

Chris Herndon got off on the wrong foot with Gang Green’s new coaching staff when he was suspended four games for last year’s DUI arrest, rendering Herndon ineligible until Week 6 due to the Jets’ Week 4 bye. It was a highly unfortunate outcome after Herndon’s promising first season, where he became just the eighth rookie tight end to top 500 yards in the last decade and finished No. 10 among 30 qualified tight ends in yards per route run (1.66). Herndon’s suspension renders him borderline undraftable in normal re-draft leagues and entered Herndon into the NFL’s substance-abuse program, increasing his long-term Dynasty risk. Due to depth shortages, the Jets will have to all but punt the tight end position during Herndon’s absence. Texans castoff Ryan Griffin and blockers Eric Tomlinson and Trevon Wesco are next in line for snaps.

Le’Veon Bell landed a four-year, $52.5 million contract with $27 million guaranteed from the Jets after sitting out the 2018 season over a franchise-tag dispute with the Steelers. Reports indicated Bell spent most of the year partying and working on his rap album while letting his weight balloon to 260 pounds. Gase let word leak he never wanted to pay big money to a running back – the Le’Veon signing was reportedly ownership driven – and Bell’s environment downgrades severely from Pittsburgh, where he ran behind one of the best offensive lines in the league. As last year’s Jets line ranked dead last in Football Outsiders’ Adjusted Line Yards, Gase preferred to spend on C Matt Paradis, who instead went to Carolina. The Jets are banking on additions LG Kelechi Osemele and C Ryan Kalil — both on the wrong side of 30 and coming off career-worst years — to help provide a short-term fix. In 2017, Le’Veon set four-year lows in yards per carry (4.0) and yards per touch (4.8) and broke tackles at the lowest rate of his career. Bell also finished 26th in PFF’s Elusive Rating after ranking 11th, 3rd, and 7th in his prior three years. Despite his lengthy red-flag list, Le’Veon’s volume projection keeps him on the first-round fringe in season-long leagues with a realistic chance to contend for the NFL lead in touches.

As Bell allegedly fell out of shape during his time off and averaged 3.6 missed games over his first five seasons, Jets backfield depth takes on increased importance. 30-year-old Bilal Powell re-upped on a one-year, $1.02 million deal after a neck injury cut his 2018 season nine games short. Ex-Packer and Raven Ty Montgomery is on his third team in two seasons after inking a one-year, $895,000 contract to join Gang Green as versatile reserve. Elijah McGuire operated as the Jets’ feature back over last season’s final four games, averaging 19.5 touches for 76 yards with four TDs but only 2.66 yards per carry behind nonexistent run blocking. Smallish (5’10/185) speedster (4.45) Trenton Cannon is also in the mix. Camp reports suggested Gase prefers all-purpose threat Montgomery as the top alternative to Le’Veon, while previous-regime holdover McGuire may have fallen out of favor. Either way, Montgomery looks like Bell’s best-bet handcuff.

The Jets’ win projection is 7.5 games, surprisingly aggressive for a team that has won more than five once in the last half decade. Adam Gase oversaw a turbulent first offseason as coach, forcing out GM Mike Maccagnan after the two clashed over free agent expenditures, conducting a strange googly-eyed introductory press conference, and hiring controversial Gregg Williams to run New York’s defense. On the field, this year’s Jets stand to benefit from the NFL’s second-easiest schedule based on Opponent Win Totals as well as positive health regression after last year’s offense was wrecked by injuries. More win-loss regression could come via one-score games, where the 2018 Jets went 2-6. Gase’s Dolphins combined to go a league-best 20-6 in one-score games during his three years. I’m taking the over on the Jets winning 7.5 games this year.