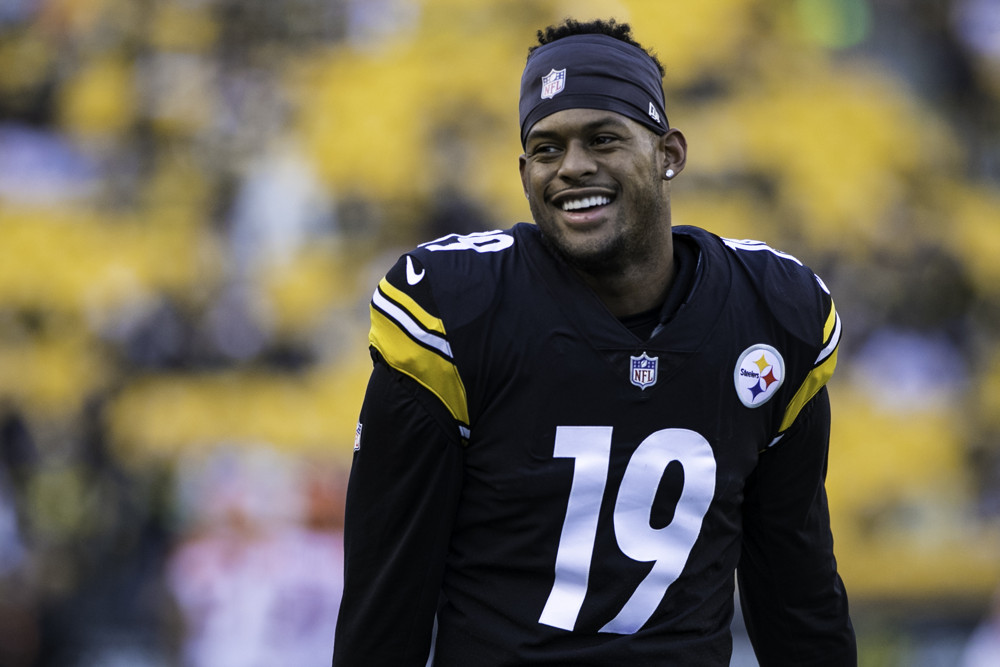 Ben Roethlisberger enters his 16th NFL season coming off career highs in completions (452), attempts (675), and yards (5,129) in a post-Todd Haley offense that was run by Ben himself, leading the NFL in pass attempts and finishing fifth in plays per game. All in on Roethlisberger, the Steelers signed him to a two-year, $63 million extension through 2021 and will continue to trot out Ben as their offensive focal point under Roethlisberger-handpicked OC Randy Fichtner. Although Antonio Brown’s departure hurts his supporting cast, Roethlisberger returns behind an offensive line that brings back all five starters after ranking No. 4 in Football Outsiders’ pass protection and a pass-catcher corps ridden with athleticism and potential for Roethlisberger to elevate. I’m buying Big Ben at his late-round ADP and 32-to-1 MVP odds.

JuJu Smith-Schuster is among 2019’s most-exciting first-tier receiver picks after finishing fourth in the NFL in targets in a passing game missing the league’s fifth-most targets from last year’s team. The 2018 Steelers ran an extreme high-volume passing attack, while JuJu returns with easily the best Big Ben rapport among Pittsburgh pass catchers. Red flags involveAntonio Brown’s loss to drive coverage to Smith-Schuster and the possibility JuJu plays less slot, where he runs high-percentage routes and racks up easy catches. Smith-Schuster did average more yards per route outside (2.49) than inside (1.83) last year, and JuJu’s slot rate could actually rise if perimeter WRs Donte Moncrief and James Washington secure Pittsburgh’s Nos. 2 and 3 jobs. A real candidate to lead the league in targets, Smith-Schuster is my WR7 behind Davante Adams, DeAndre Hopkins, Odell Beckham, Julio Jones, Michael Thomas, and Tyreek Hill.

Donte Moncrief generated the most spring buzz in Pittsburgh’s No. 2 wideout battle after signing a two-year, $9 million deal, receiving public praise from Roethlisberger and WRs coach Daryl Drake for his quick comprehension of the offense. At 6-foot-2, 221 with 4.4-flat speed, Moncrief has spent most of his career as an enigmatic underachiever but is clearly superior athletically to James Washington (5’11/213, 4.54) and reportedly extended his lead on Washington early in camp. On a pass-heavy team with an abundance of post-Antonio Brown opportunity, Moncrief makes for an ideal late-round WR5 targets in all forms of fantasy. Catching passes from Big Ben after trying to do so with Jacoby Brissett, Blake Bortles, and Cody Kessler should be quite refreshing for Chief ‘Crief. He’s become an aggressive draft target of mine.

2018 third-round pick James Washington, 2019 third-rounder Diontae Johnson, 2018 trade acquisition Ryan Switzer, and Eli Rogers round out the Steelers’ candidates for significant wide receiver snaps. Washington struggled mightily as a rookie, never establishing an on-field rapport with Roethlisberger and managing an anemic 0.57 yards per route run, which would have tied the Bengals’ John Ross for dead last in the league had Washington played enough snaps to qualify. Washington later admitted he played in the 223-225 pound range and shed 15 lbs. after the season. Johnson’s size (5’11/183) and speed (4.53) don’t stand out, but he showed dazzling ability with the ball in his hands by scoring four return-game touchdowns at Toledo and leading the nation in punt-return average over the past two years (19.9). Johnson best fits in the slot and would likely move Smith-Schuster outside more if he earns playing time in three-wide sets. Switzer and Rogers both ran over 70% of their 2018 routes in the slot.

Vance McDonald may wind up the biggest beneficiary of Brown’s exit after setting 2018 career highs across the board (50/610/4) and finishing third among NFL tight ends in yards after catch (392) despite ranking 20that the position in snaps. Only George Kittle broke more tackles. Jesse James’ departure is a probable plus for McDonald’s playing time, and including playoffs McDonald enters 2019 with 88 targets over his last 16 games, which last year would have ranked eighth at the position. McDonald is an ideal middle-round tight end pick for fantasy leaguers who miss on the Travis Kelce-Kittle-Zach Ertz tiers.

James Conner broke out as last year’s PPR RB3 in Weeks 1-10 before a concussion and high ankle sprain cut into his stretch-run snaps. Prior to the injuries, Conner averaged 23.6 touches for 135.6 yards with ten touchdowns over Pittsburgh’s opening eight games. Although Conner’s 2.86 yards after contact per carry ranked a middling 26thamong 56 qualified backs, he placed top ten in PFF’s Elusive Rating and No. 2 in broken tackles on receptions. All five Steelers offensive line starters return. Conner’s biggest hurdle will be holding off versatile Jaylen Samuels and rookie Benny Snell for full-time feature back usage, but the Steelers’ historical commitment to one-back offenses over RBBCs works in Conner’s favor. I have Conner ranked as this year’s RB8, right behind Joe Mixon near the top of my second running back tier.

Jaylen Samuels made three late-season starts with Conner on the shelf, parlaying 18 touches into 109.3 yards per game and playing 71% of Pittsburgh’s offensive snaps during that stretch (Weeks 14-16). A plus-sized swiss-army knife at 6-foot, 225, Samuels graduated from NC State with 201 career catches and secured 26-of-29 targets (90%) as a rookie. Samuels’ receiving skills dwarf those of fourth-round pick Benny Snell, a 224-pound grinder with pedestrian 4.66 wheels. Whereas Snell is more of a stash-and-see Dynasty prospect, Samuels offers handcuff appeal with an outside shot at carving out flex value.

The Steelers’ 2019 Win Total is 9.0 games, a number they’ve matched or beaten in five straight seasons. This year’s club draws the NFL’s 13th-softest schedule based on Opponent Win Totals after GM Kevin Colbert devoted his offseason to fixing the locker room by trading Antonio Brown and letting Le’Veon Bell walk. Pittsburgh’s biggest acquisitions were Donte Moncrief on offense and CB Steven Nelson and first-round ILB Devin Bush on defense. With so much hype surrounding the division-rival Browns, the football-observing public seems to be sleeping on a Steelers team still very much in conference-title contention. I like Pittsburgh to win double-digit games and Ben Roethlisberger as an MVP long shot.