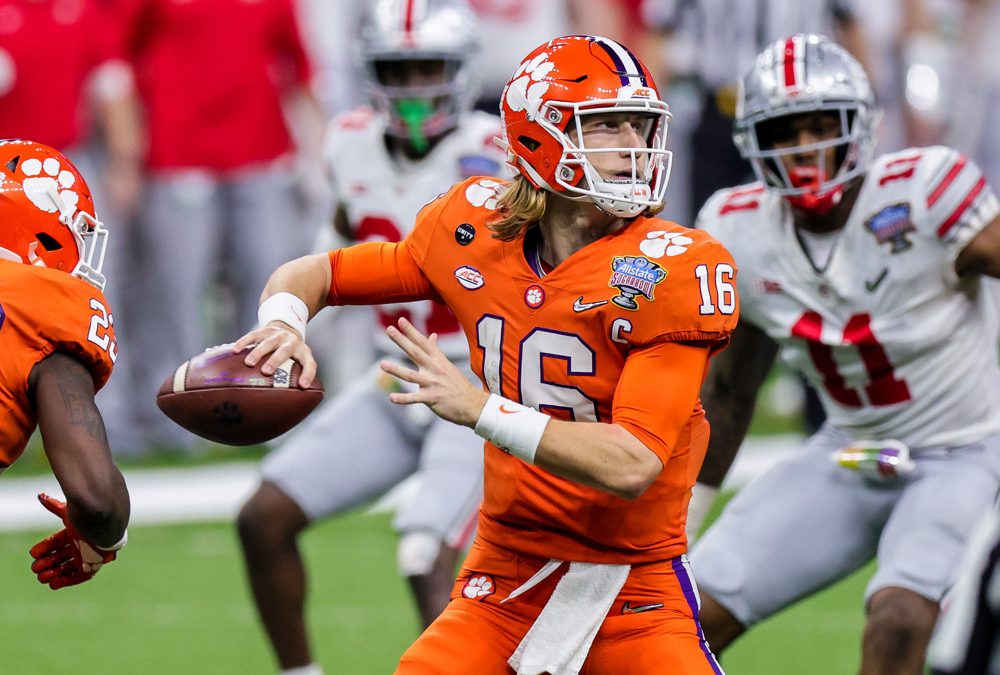 I’ll be providing an early look at both the Offensive and Defensive Rookie of the Year races over the next few days. However, the uncertainty surrounding who the 49ers are going to take with the third overall pick has created some significant market value disparities between national sportsbooks for some of the top quarterbacks in the Offensive Rookie of the Year race. This column is focused on the five quarterbacks that are expected to be selected during tonight’s first round.

Trevor Lawrence (+250 Fox Bet vs +225 MGM vs +200 DraftKings)
Lawrence is a generational quarterback prospect and that’s no secret. He’s not only the favorite, but he’s legitimately the guy everyone else has to beat in the Offensive Rookie of the Year race. As I mentioned in my totals column, Lawrence is inheriting an above-average supporting cast compared to most first overall picks, with a solid offensive line and a versatile pass-catching group that collectively has elite speed (D.J. Chark), a tight window/contested catch option (Marvin Jones) and a big, physical young athlete in Laviska Shenault. The +250 that Fox Bet is currently offering could realistically be the best unadjusted price we can get before the start of the season.

Zach Wilson (+700 DraftKings vs +600 Fox Bet vs +550 MGM)
Wilson is currently -10,000 to be selected second overall by the Jets on DraftKings, which means we can confidently operate as if New York is his destination. In that event, an Offensive Rookie of the Year bet on Wilson is a bet on a volatile young quarterback elevating an improved, but still average (at best) offense enough to beat a variety of other legitimate Offensive Rookie of the Year contenders. While Wilson has enough talent to succeed in the NFL, he has an uphill battle to winning the award this season based on his likely landing spot.

At this point in time, any of these three quarterbacks could end up going to the 49ers with the third overall pick. Whoever does will likely end up as the second favorite in this race moments after they are selected, which means that betting on the right guy now is going to create value. If current 49ers starting quarterback Jimmy Garoppolo is traded, whoever the 49ers’ rookie signal caller is could realistically be nearly even with Trevor Lawrence soon after that trade is announced due to the quality of the landing spot in San Francisco. There are already rumors that the Patriots are involved in talks to acquire Garoppolo, which means that this trade could conceivably happen as early as this weekend.

Jones’ candidacy is going to be very dependent on landing with the 49ers, although the Patriots or the Saints could also give Jones a realistic path to significantly exceeding expectations in his rookie season. All three of those environments, with the Saints being an unlikely landing spot for Jones, are all well-suited to support a more traditional pocket passer like Jones.

Given Lance’s age (turns 21 in early May), his inexperience (2019 is his only season as a starter) and the level of competition he faced in college (North Dakota State is a Division 1 subdivision team), it would make sense for Lance’s future employer to gradually acclimate him to the NFL experience. So, sitting behind Matt Ryan in Atlanta, Ryan Fitzpatrick in Washington or Teddy Bridgewater in Denver for at least some of the 2021 campaign would probably be in Lance’s best interest. Apart from Lance landing in San Francisco, I would otherwise be hesitant to place an Offensive Rookie of the Year bet on the former North Dakota State Bison given the competition this year for this award and the potential that his new team might not want to rush him into playing time.

I understand some of the on-field concerns with Fields — I hated the first half of his 2019 Big Ten Championship game against Wisconsin as an example — but Fields is also a dynamic, dual-threat talent with a big-time ceiling that has a lot of skill set similarities with former Offensive Rookie of the Year Robert Griffin III. That ceiling gives Fields a wider range of outcomes for his rookie season than either Jones or Lance. As an example, if Fields ended up with the Lions and took over for Jared Goff before the end of September, Fields could stat accumulate enough while consistently playing from behind to compete for this award despite that potential brutal landing spot. In other words, as long as Fields has a realistic path to playing time, he won’t be drawing dead in this race heading into the season, regardless of landing spot. If he ends up being the guy that lands in San Francisco, the +800 you can currently get at DraftKings is going to be a steal.

Lastly, if you’ve placed a bet on any of these three quarterbacks to be the 49ers’ selection with the third overall pick, it would be very reasonable to place a speculative Offensive Rookie of the Year bet at these current best odds on that same player. Additionally, I have done the math for betting on Lawrence and all three of this Jones, Lance, and Fields group. I’m not going to do it because there are a handful of skill position players that could realistically be a factor in this race, but otherwise I think that strategy has a very good chance of yielding a winner.