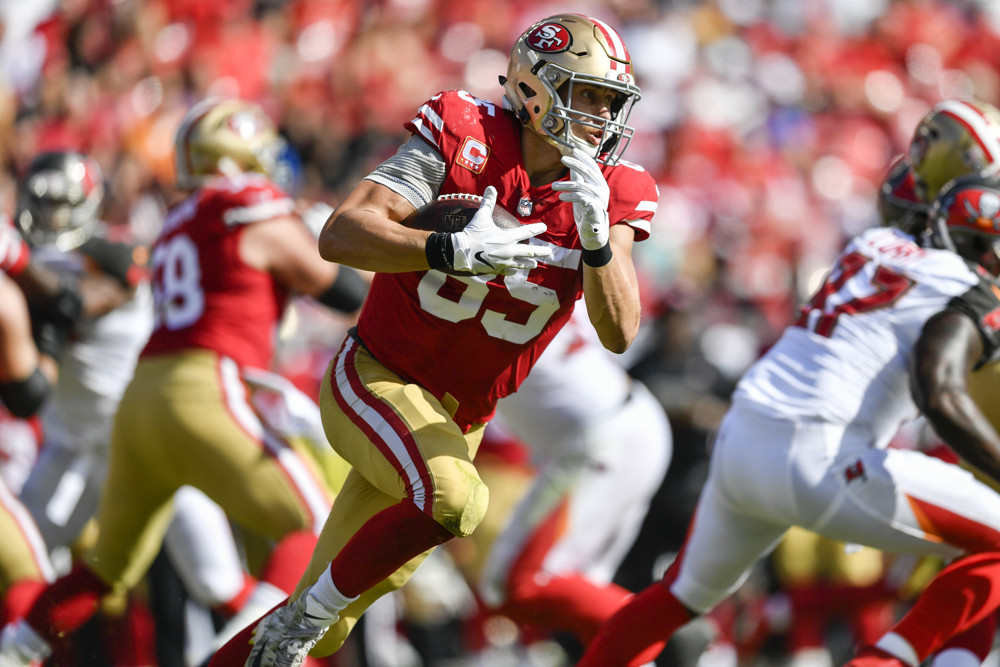 NOTABLE INACTIVES (Will be updated after official inactives): UPDATE: Rishard Higgins is expected to be ruled out. This gives a bump to Ratley, while making Callaway dart throws more viable.

The most important part to being successful in one-game Showdown contests is constructing a highly correlated lineup built around how we think the game will be played. As we head into Monday’s matchup that features the Browns at 49ers, we have a 15-game sample that we can analyze for winning roster construction and look at any meaningful trends to apply moving forward. The winning lineups for the first 15 games are as follows:

The analysis in this section will continue to evolve as we get more information about winning Showdown lineups. Now on 9-of-15 winning rosters, DST’s continue to be deserving of roster consideration. Through 15 slates DST’s are averaging 7.4 DraftKings points at a $4000 average salary and 18% ownership. If we break this down further by favorites versus underdogs, we see favorites priced up to $4700 and owned at a 26% clip as opposed to just $3400 and 11% ownership for underdogs. Because DST scoring is extremely high variance and scoring events like turnovers and defensive touchdowns are largely unpredictable, we may be able to leverage the field by rostering the cheaper, lesser owned option. It’s worth further noting that DST’s in higher total games are underowned relative to their probability of ending up on winning lineups. DST’s on Showdown slates featuring a total greater than 45 have been owned on average 15% and maintained a 7.1 median DraftKings score.

Kickers have been slightly more productive than DST’s to start the Showdown season and have found their way onto 8-of-15 winning rosters. Kickers are scoring an insane 7.9 DraftKings points on average at $3400 and 24% ownership. If we look at all fantasy performances through three weeks we see that DST’s offer a wider range of outcomes and a higher ceiling than kickers due to the ability to score points via touchdowns. Thus far, defenses and kickers have been priced “reasonably” by DraftKings, resulting in adequate or better point per dollar median projections. If prices start to rise, or if ownerships rise, these options become less viable GPP picks. Whether we’re MME players or building just a single lineup, the ability of cheap players to outscore both kickers and DST’s will determine how often we need to roster either position. Read through our ‘notable players’ section for more slate specific thoughts on kickers and DST’s. 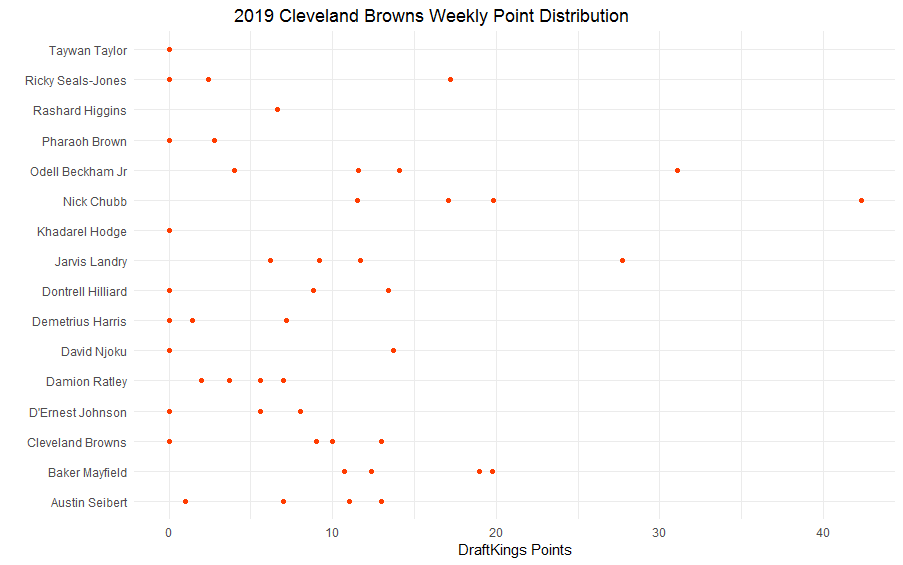 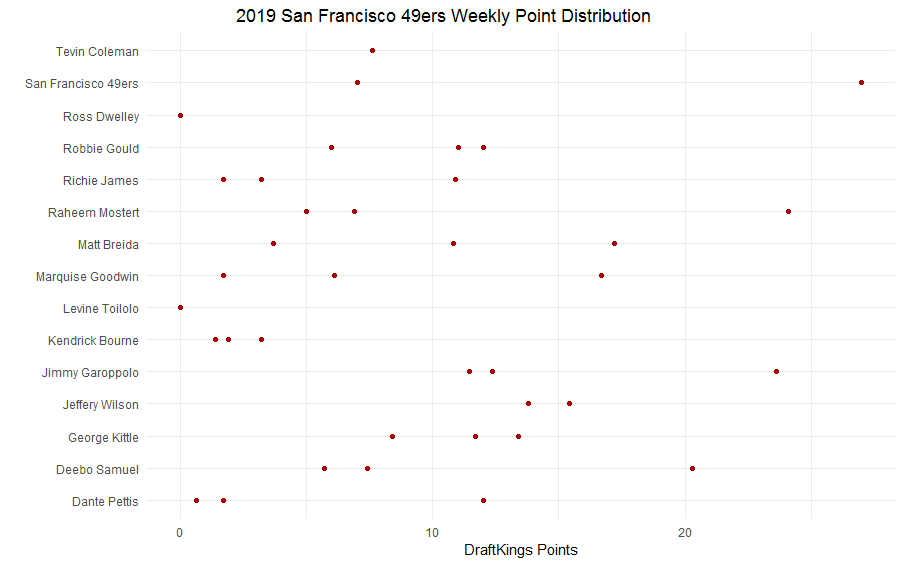 Monday night’s Showdown contest boasts a strong 47-point total with the undefeated 49ers listed as 5-point favorites over the visiting Browns. The 49ers are the run-heaviest team through the first quarter of the season, passing on just 43% of their offensive plays. The Browns come in ranking 11th in pass rate and should benefit from playing against the 3rd fastest situation neutral offense.

Odell Beckham Jr. ($10,400) has seen his Showdown salary fall from $11,800 to $10,400 after failing to show up big in the box score for a second straight week. Beckham’s up-and-down start with his new team would be more concerning if he wasn’t getting elite WR1 usage. He continues to run a route on every dropback handling a 24% target share and 34% of air yards. After erupting for 8/167/0 as a Josh Hermsmeyer buy-low darling, Jarvis Landry ($7200) should once again see ample opportunities against a beatable 49ers secondary. Landry has been more of a 1b to Beckham than a true #2 running identical routes (97%) and seeing similar target share (23%) and air yards (30%). Antonio Callaway ($6,200) gives the Browns another lid-lifter on offense though he may not be on the field enough to pay off his price tag as it’s been suggested he’ll be on a snap count in his return to action. He can be viewed as a touchdown-or-bust option Monday night. With Callaway back in the fold, the WR situation behind him gets murky. Rashard Higgins ($2,400) and Damion Ratley ($1,400) would be next in line for opportunities if Callaway is extremely limited. As Silva noted in matchups, Cleveland increased their use of two-tight end personnel in week four with positive results. A major beneficiary of that change was Ricky Seals-Jones ($2,800) getting more involved in the passing game. While Seals-Jones only played on 30% of snaps, he ran a route on 47% of dropbacks in a game the Browns won by 15. Demetrius Harris ($200) got a price cut all the way down to the stone minimum on DraftKings despite playing on 67% of snaps and running a route on 44% of dropbacks. While he didn’t pop in the boxscore, Harris is on the field too often to be priced at the minimum. After blowing up in week four, Nick Chubb ($10,200) will face a stout 49ers defense as a road underdog. If Chubb isn’t able to get things going on the ground, his increased usage in the pass game makes him less game script dependent. Baker Mayfield ($9,600) should benefit from the bump in 12 personnel as he’s been the most effective when operating with two-tight ends on the field. The 49ers are beatable in the secondary if the Browns OL can keep Mayfield upright long enough to get rid of the ball.

The 49ers have won their first three games by scores of 14, 24 and 4. They appear to be #EstablishingIt as evidenced by their 57% run rate through three games but a negative game script may force them into more dropbacks. Deebo Samuel ($6,600) is priced as the 49ers WR1, if we can call him that. The 49ers have frustratingly managed their WR group, giving five different players a notable share of opportunities. Samuel has been on the field for 59% of snaps and run a route on 65% of dropbacks. He also leads the team with an uninspiring 15% target share. Marquise Goodwin ($6,400) checks in behind Samuel in price but leads him in opportunity with a 63% snap share, running a route on 69% of dropbacks and leading the team with 21% of air yards.With his huge 15.3 aDOT and elite speed, Goodwin could get behind this banged up Browns secondary for a big day. Dante Pettis ($3,400) has been a massive disappointment following a fair amount of off-season hype. Pettis has seen his playing time increase after playing on just 4% of snaps in week one. Now running a route on 30% of dropbacks to the tune of a 6% target share he’s still difficult to trust but his role may be expanding. Richie James Jr. ($1,000) has been the preferred slot receiver through the first three weeks. Just behind Goodwin and Samuel in routes run (60%) James has seen 64% of his snaps come from the slot. Getting a 20% share of air yards, James is underpriced for his current role in the 49ers offense. George Kittle ($9,000) is by far the 49ers best pass catching option and favorite to put up a Captain worthy performance Monday night. Kittle leads the team with a 24% target share and is just ahead of Goodwin for team leader in air yards. Prior to the bye week Kittle popped on Hermsmeyer’s buy-low model and gets a Browns defense that has been kind to opposing TE’s in the early going. The 49ers project to use a legit four-headed RBBC with Tevin Coleman ($5,600) expected to be active. It’s unclear what kind of role, if any Coleman will have if he is indeed healthy enough to go Monday. In his absence opportunities were evenly split between Matt Breida ($6,800), Raheem Mostert ($5,400) and Jeff Wilson Jr. ($5,200). Breida maintained a slight edge in snaps (38%), routes (33%) and rushing attempts (36%) over the other two backs making him our preferred option straight up. It appears Wilson may have carved out a niche as the go-to goal line back after handling five attempts inside the 5 yard line in weeks 2-3. Jimmy Garoppolo ($9,800) has been effective in his first three games, the 49ers just haven’t been forced into enough dropbacks to give Garoppolo enough volume to access a ceiling performance. If the Browns can put some pressure on the 49ers offense we may see enough attempts out of Garoppolo to get a 300 yard, 3TD type performance we need out of our Captain position.

*Captain Odell Beckham Jr., George Kittle, Jarvis Landry – Both pass offenses are condensed around their stars. We can roster these pass catchers with or without their QB’s and capture the upside either way.

*Captain Nick Chubb, George Kittle, Deebo Samuel – We’ve seen that projecting a contrarian game script is an easy way to build a unique roster. If the Browns get up early on the 49ers, Chubb will see increased opportunities.

*Captain Baker Mayfield, Jimmy Garoppolo, George Kittle, Non OBJ/Landry Browns – If Mayfield can spread the ball around it will limit ceiling performances from Landry and Beckham.

*Captain George Kittle, Jarvis Landry, Nick Chubb – As the 49ers top pass catcher and member of the week four buy-low model, Kittle could do all the damage for the 49ers en route to a Captain worthy performance.

*Captain Jimmy Garoppolo, Baker Mayfield, Marquise Goodwin – 2QB rosters, now in 6-of-15 winning lineups, have become a staple for Showdown slates. Typically, when one QB puts up a ceiling performance the opposing QB can do enough to also be a top 6 scorer.

Matt Breida – Of the three-headed RBBC in San Francisco, Breida is the best option. He gets a slight boost if we project more dropbacks for Garoppolo as he appears to be the preferred pass catching option.

Deebo Samuel – 2nd on the team in targets behind Kittle, is one of the safer members of the five-man WR rotation.

Marquise Goodwin – 2nd on the team in air yards, Goodwin is seeing the best underlying usage of this tough to project WR group.

Antonio Callaway – Callaway is one of the biggest question marks on the slate. We can take shots on him at low ownership in the hopes that his snaps aren’t extremely limited. If we get more clarity on his playing time prior to lock, it will be updated here.

Dante Pettis – After barely playing in week one, Pettis has seen an increase in opportunities the past two weeks.

Ricky Seals-Jones – Seals-Jones will continue to see opportunities as long as the Browns run 12 personnel. He is the Browns preferred pass catching TE over Demetrius Harris.

Rashard Higgins/Damion Ratley – Higgins is playable if active and if we expect Callaway to see just minimal usage.

Demetrius Harris – Harris has played 78% of snaps and run a route on 55% of dropbacks since David Njoku’s week three injury.