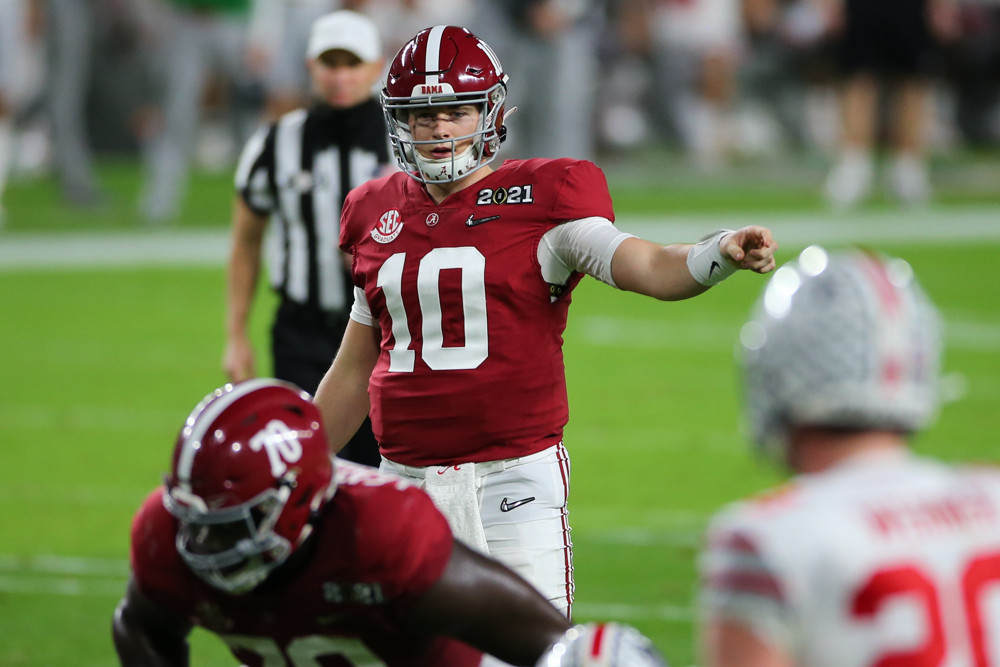 This is my first mock draft of the 2021 offseason. I will publish my final mock the night before the draft, which begins on Thursday, April 29.

Jacksonville’s successful multi-year plan to position itself to draft Lawrence likely played a major role in Urban Meyer’s emergence from retirement to take on his first-ever NFL head-coaching gig. Supported by an underrated offensive line returning all five starters and a diverse wide receiver corps yet to be fully unlocked, Lawrence is capable of immediately elevating the Jaguars from a bottom-three offense to a mid-range scoring group. Equipped with two first-rounders, two seconds, the 65th pick, two fourths, and two fifths, Jacksonville looks set up for a quick ascension under revamped leadership.

Drafting quarterback at No. 2 is a no-brainer decision for GM Joe Douglas, who inherited Sam Darnold from New York’s previous regime and can essentially wipe his résumé clean while attributing past failures to Darnold and Adam Gase. Here, Douglas can pair Gang Green’s brand-new coaching staff with a 21-year-old franchise signal caller. Wilson dominated a soft 2020 schedule and struggled with durability in college, but he is a power-armed dual threat graded as this year’s No. 2 quarterback prospect by NFL Network draft analyst Daniel Jeremiah, a close confidant of Douglas.

I continue to strain to believe any team would surrender three first-round picks and a third-rounder to draft Jones over superior talents Justin Fields and Trey Lance, yet virtually all NFL insider rhetoric points firmly in this direction. As the popular narrative goes, 49ers coach Kyle Shanahan envisions Jones as a plus version of past pupils Matt Ryan–Kirk Cousins–Jimmy Garoppolo as a distributor rather than playmaker who can operate comfortably and efficiently within Shanahan’s after-catch-driven scheme.

Having overhauled their front office and coaching staff, the Falcons are positioned to begin a soft rebuild by going quarterback here. Atlanta can save over $8 million versus the cap by cutting Matt Ryan in 2022 and $28 million in 2023. Investing in a dual-threat playmaker of Fields or Trey Lance’s ilk would grant first-year GM Terry Fontenot and rookie coach Arthur Smith a surplus season of rope after inheriting one of the league’s oldest rosters quarterbacked by a downward-trending 36-year-old.

Northwestern’s Rashawn Slater has gained recent steam to be 2021’s first offensive lineman drafted, but I’m sticking with chalk in this particular mock. Sewell remains the highest-ceiling blocker in this year’s class, and perhaps no NFL team is as needy up front as Cincinnati. Drafting Sewell could strengthen three positions by allowing the Bengals to move Jonah Williams to right tackle and Riley Reiff to guard. Sewell would take over as Joe Burrow’s blindside protector.

This pick comes down to Pitts and LSU WR Ja’Marr Chase. Chase is a studly prospect every bit worthy of this selection, yet Pitts is a true unicorn with elite athleticism, size, and production. 2020’s Mackey Award winner also holds his own as a blocker. Since any designs on trading for Deshaun Watson have fallen through, the Fins are rightfully going all in on Tua Tagovailoa. Drafting Pitts would raise Tua’s odds of succeeding.

Breshad Perriman and Tyrell Williams would be the Lions’ Nos. 1 and 2 receivers if the season began today. Chase is a high-percentage bet at an obvious position of need and a long-term building block for talent-starved Detroit at one of pro football’s most needle-moving positions.

Whether it be via trade up or having the extremely good fortune of him falling into their ninth-overall laps, the Broncos emerge from this mock with a dream first-round scenario. Lance is dangerously short on experience – just 288 career pass attempts and 17 starts – but extremely long on dual-threat capability. Lance also didn’t throw a single pick in college while passing for 28 touchdowns and running for 16 more.

The Cowboys return an offense that should compete for the league lead in scoring but haven’t done enough to improve a defense that last year yielded the NFL’s fifth-most points. Plus sized (6’2/208) and pro ready coming from Nick Saban’s secondary, Surtain answered questions about his speed (4.42) at Alabama’s Pro Day and would instantly upgrade a major trouble spot in Dallas.

Vera-Tucker shined as a sophomore guard before excelling at tackle in 2020, and the Giants could use help at both spots. I suspect he would man right guard initially in New York. Scouts consider Vera-Tucker one of this year’s safest prospects regardless of position.

Waddle went for 120-plus receiving yards in each of Alabama’s first four 2020 games before an ankle injury torpedoed his season. When healthy, Waddle averaged nearly 19.0 career yards per catch and scored three TDs in the return game, demonstrating elite playmaking ability with the ball in his hands. In this scenario, the soft-rebuilding Eagles could surround 2021 quarterback starter Jalen Hurts with speedsters Waddle and Jalen Reagor on the perimeter and obvious breakout candidate Dallas Goedert at tight end behind a still-loaded offensive line.

A squatty but explosive inside-outside pocket pusher at 6-foot-2, 261, Paye ran a freaky 4.52 forty and benched 225 pounds 36 times at Michigan’s Pro Day. The Bolts are in the edge-rusher market after letting Melvin Ingram walk.

The Vikings are loaded at the skill positions and improved on defense. Trotting out Darrisaw and Brian O’Neill at tackle, Ezra Cleveland and Dru Samia at guard, and Garrett Bradbury at center would give Minnesota an impressive young fivesome up front.

Having long struggled to draft wide receivers, Bill Belichick can rely on his relationship with Nick Saban here. Wideouts in Smith’s size range (6’0/170) have a small track record of big-league success, but 2020’s Heisman Trophy and Biletnikoff Award winner’s production speaks for itself. A superb route runner, Smith reminds me of Marvin Harrison.

Horn’s stock has risen since the Gamecocks’ Pro Day, where he measured 6-foot-1, 205 and ran 4.39 with especially springy vertical (41 ½”) and broad (11’1”) jumps. 32-year-old Robert Alford and 31-year-old Malcolm Butler would be the Cardinals’ top-two perimeter corners if the season began today.

Phillips has drawn Joey Bosa comparisons at 6-foot-5, 260 with otherworldly 4.56 speed. He banked eight sacks and 15.5 tackles for loss in just 10 games last year. The Raiders have struggled to rush the passer throughout Jon Gruden’s patience-testing tenure.

By far, the weakest area on Washington’s roster is the left side of its offensive line. Eichenberg anchored Notre Dame’s elite front five at left tackle for each of the last three seasons, allowing zero sacks and just four combined QB hits over the last two. He’s a high-probability bet at a high-value position.

The Bears whiffed on free agent target Kenny Golladay, haven’t come to long-term terms with franchise player Allen Robinson, and are actively shopping slot man Anthony Miller. Bateman played over 60% of his 2020 snaps in the slot but performed better outside in 2019. In Chicago, Bateman and Darnell Mooney would bookend each other on the perimeter, allowing Robinson to dominate inside.

Farley might have been the first cornerback drafted if not for a late-March microdiscectomy on his back after Farley opted out of 2020 over coronavirus concerns. He still belongs in the first round and is expected to be ready for Week 1. The corner-needy Colts would get a steal here if Farley stays healthy.

The Titans are rebuilding their secondary after cutting Malcolm Butler, Adoree Jackson, and Kenny Vaccaro. Over the last two seasons, PFF charged Newsome with just 435 yards and one touchdown allowed on 81 combined targets (5.4 YPA). At Northwestern’s Pro Day, Newsome blazed 4.38 with a 40-inch vertical at 6-foot, 192.

Rousseau banked a whopping 16 sacks as a redshirt freshman in 2019 before opting out of 2020 over Covid concerns. This is an especially thin class for edge rushers, which should help Rousseau’s stock due to position scarcity.

Moehrig can play both safety spots and cover the slot. PFF charted Moehrig as the nation’s leader in pass breakups in each of the past two seasons.

Having parted with Olivier Vernon after finishing 16th in sacks (38) and 22nd in QB hits (79), the Browns need pass-rush help to support a secondary that underachieved last season. A speed rusher with 4.62/4.66 jets, Ojulari banked 15 sacks and five forced fumbles in 21 games over the past two years.

2020’s Butkus Award winner as the nation’s premier linebacker, Owusu-Koramoah’s skill set aligns with the NFL’s progressive defensive approach. The Bills tend to be ahead of the game in this regard. Albeit only 221 pounds, JOK exhibited elite short-area quickness with a 6.81 three-cone time at the Irish’s Pro Day after flashing elite cover skills in South Bend.

Offensive line is the Chiefs’ foremost roster weakness. Per PFF, Jenkins didn’t allow a single sack across 623 pass-blocking snaps over the past two years. He would immediately take over at right tackle in K.C.

Returning all 22 starters from last year’s Super Bowl team, the Bucs can internally justify a luxury pick here. Etienne scored 78 TDs and averaged over 7.0 yards per carry and over 11.0 yards per catch across four years at Clemson, then blazed 4.41/4.43 at 5-foot-10, 215 at the Tigers’ Pro Day. Etienne is a vastly superior receiver and runner to both Leonard Fournette and Ronald Jones.