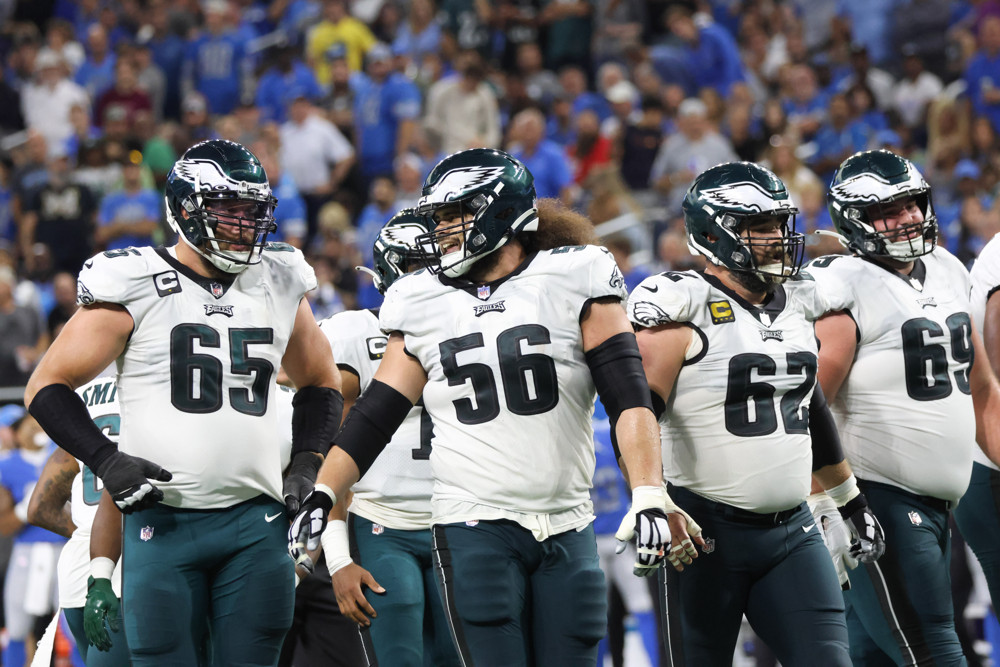 The primary factors I use to arrive at these rankings are my game-film evaluation of each individual offensive lineman and 2022 performance as a unit from Weeks 1-9 — with an eye towards the rest of the season.

Notes: The Eagles were the top-ranked unit entering the season and have matched that expectation through the first half of the year by controlling games up front in all facets. With giant, hulking tackles and guards flanking the best center in the NFL in Jason Kelce, the Eagles can win equally with power or athletic ability. Lane Johnson has been arguably the best overall tackle in the NFL this season regardless of side and paired with Jordan Mailata forms an outstanding duo on the outside. The Eagles also have a top-shelf line coach and run game coordinator in Jeff Stoutland that consistently puts the players in positions to succeed while maintaining an excellent developmental pipeline behind them to ensure quality depth.

Notes: Cleveland is the only unit in the NFL that can come close to matching the Eagles prowess up front with one of the few line coaches in the league that can rival Stoutland in Bill Callahan, who does a phenomenal job developing and accentuating player strengths while designing the league’s top-ranked run game. The Browns line doesn’t have the quality pieces around them at QB or WR, but are firmly the identity of a top-five offense with the best guard pairing in football with Wyatt Teller and Joel Bitonio.

Notes: The Chiefs offensive line is led by the interior trio comprised of a top-three left guard in Joe Thuney, top-three center in Creed Humphrey, and a top-10 right guard in Trey Smith with the physical talent to climb up that list in the near future. Orlando Brown has always been up and down as a pass-protector but can blot out rushers with his body positioning and size while Andrew Wylie is a scrappy, aggressive blocker that can compete against other mid-tier starters. The secret sauce is the infrastructure around this line led by head coach Andy Reid and line coach Andy Heck, who have mastered the design to cover their weak spots up front while having the league’s best quarterback to offset and neutralize mistakes. This line does an excellent job of setting a firm pocket up the middle while the tackles protect the inside to ensure if they lose it is around the corner, which builds in escape routes up and out of the pocket for Mahomes.

Notes: This is a borderline elite run-blocking unit led by a dominant duo of run-blockers in Zack Martin and Terence Steele. Zack Martin is a future Hall of Famer operating at an elite level while Steele is a long, powerful bulldozer. Martin is also an elite pass-blocker with mostly solid pass-blockers around him. The unit’s handling of the left side since Tyron Smith went down three weeks before the season with a knee injury, has been a question mark considering they have a future Hall of Fame left tackle in Jason Peters rotating with backup Connor McGovern at left guard, but they have managed to make it work against a middling schedule of pass-rushers and a dominant ground game. Tyron Smith should return at some point this season, which would allow rookie Tyler Smith to kick back inside, solidifying their place as a top 3-4 unit.

Notes: The Saints were expected to be a very good unit entering the season and, despite a few hiccups along the way have largely lived up to that billing. Rookie first-round pick Trevor Penning has been out with a turf toe injury since the preseason, but has recently got out of a walking boot and has begun getting his cardio back up on the treadmill. In his place, James Hurst started off shaky after filling in admirably last season but has since settled in as a functional starter. Center Erik McCoy is a top-five player at his position as is right tackle Ryan Ramczyk, while right guard Cesar Ruiz has made another leap into becoming a plus starter. This is a line that lacks a glaring weakness with a potential upgrade coming later in the season when Penning returns.

Notes: Detroit is another unit that is collectively better in the running game but have a budding superstar and top-five player at his position in Penei Sewell, with a very good center in Frank Ragnow, and two solid starters in Jonah Jackson and Taylor Decker. Their main issues have been health-related, stemming from the right guard spot which has been a major issue for them all year since Halapoulivaati Vaitai had season-ending back surgery after getting injured in the preseason. Jackson has also missed time and has played under 60% of the teams’ snaps, while QB Jared