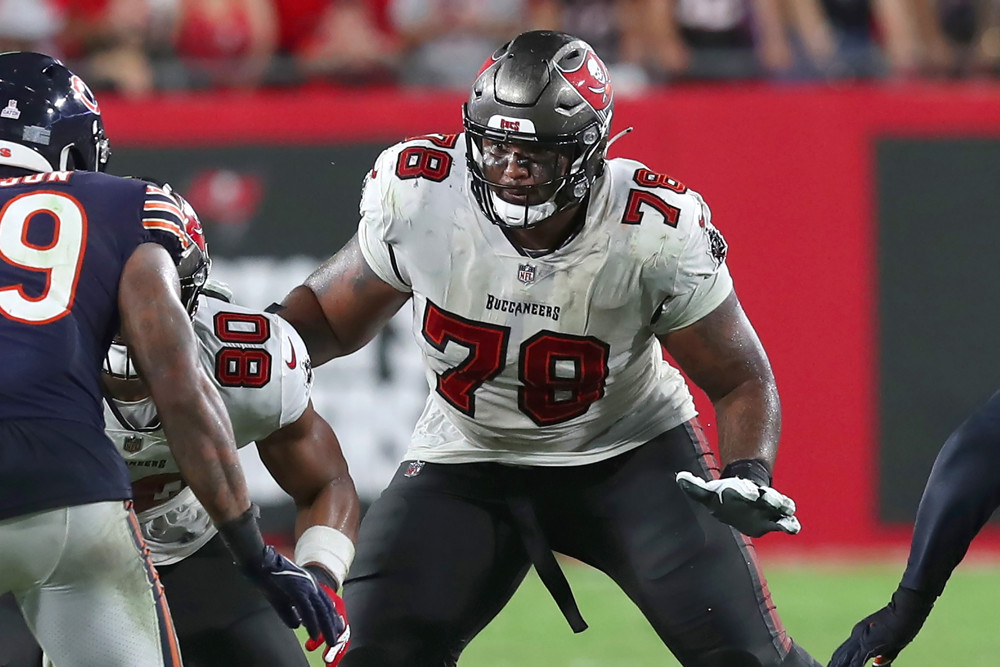 Editor’s Note 2: We are running a midseason sale! Just $149.99 for all our NFL content through the Super Bowl. Click here.

The Bucs have been the healthiest of the elite units this season without a single player missing a start and all five guys playing at least 97% of the teams’ snaps. The unit is led by their three elite players on the line (Ali Marpet, Ryan Jensen, Tristan Wirfs) who have maintained their status among the league’s best at their position through eight games. Donovan Smith has continued his 2020 level of play, which was the best of his career up until that point. A large portion of the unit’s success as pass-protectors can be attributed to QB Tom Brady’s near flawless pocket presence and quick trigger, but when you study them on film they are communicating and playing off of one another exceptionally well, plus winning their individual matchups at a ridiculously high level. This is a unit without a glaring weakness, blue-chip talent at several spots, and a line’s best friend at QB in Brady to help make their lives easier in protection.

New Orleans has dealt with a rash of injuries this season including losing two of their three pillars in Terron Armstead and Erik McCoy for a combined seven games. Additionally, starting left guard Andrus Peat tore his pec in Week 7 and is out for the season. The unit recently got Armstead and McCoy back, while maintaining an extremely impressive level of play during their absence with solid play from undrafted swing interior backup Calvin Throckmorton and swing tackle James Hurst (who is now the starting left guard). Now that the unit has four of their five projected starters back in the lineup, they are firmly entrenched in the top tier with some upside to improve as the year goes on with 22-year old starting guard Cesar Ruiz on the verge of becoming an above average starter if he can clean up some mental errors.

Similar to the Saints, this Browns unit has dealt with significant injuries to their line that has led to them being a fringe tier-two unit at different points of the first half of the year. Jedrick Wills and Jack Conklin have each played 65% or less of the teams’ snaps this season dealing with various injuries, plus they lost their swing tackle Chris Hubbard for the season prior to Week 5. Despite the injuries to the tackles, the interior remains an elite trio while the holes at tackle were largely masked due to the unmatched coaching prowess from Bill Callahan and ultra-friendly scheme that does a masterful job of covering the warts of the line, resulting in a league-leading 5.16 yards per rush, good for first in the NFL.

Conklin dislocated his elbow in Week 8 and will likely miss a few weeks before returning, with third-string tackle Blake Hence taking his spot. With Hence in the lineup this unit is closer to a tier two than tier one unit due to the impact in the run game that they lose without Conklin. Assuming Conklin returns by Week 11 or so, the bulk of their projection for the second half of the season keeps them in this spot.

David Bakhtiari’s return is on the horizon as he is practicing with the team and expected to be ready to play either in Week 9 or 10. With his return imminent, this line rises up the rankings for their second half of the season projection, after playing as a ‘solid’ unit over the first eight games. With Bakhtiari’s return the unit improves not only at left tackle but also left guard since Elgton Jenkins can return to his natural spot. Rookie Josh Myers is on injured reserve but is set to return in Week 10, which is when this unit really should take off and challenge for a spot as an elite group after a few weeks at full strength. The Packers also boast one of the most OL-friendly schemes in the NFL with a heavy reliance on the run game, play-action, and a QB that gets rid of the ball quickly to consistently keep the unit in positions to succeed.

The Rams have been the biggest risers on this list from my preseason rankings, jumping 13 spots. The biggest questions answered have been at center where Brian Allen has regained his 2019 form after a major injury to solidify the middle and right tackle with Rob Havenstein regaining his 2018 form after a couple of inconsistent seasons. With the emergence of Allen and Havenstein, there are no remaining major question marks on the unit. Inside Sean McVay’s brilliant scheme centered around shrewd uses of motion and misdirection to keep defense’s guessing with a major upgrade at QB, the line has led the way to the league’s lowest pressure rate given up at 11.9% while ranking 5th in adjusted line yards.

The Cowboys are an offensive juggernaut this season ranking second in yards per play and first in adjusted line yards as an offensive line. Their scheme is incredibly versatile with an elite quarterback orchestrating it to near perfection. This is all baked into the performance of the offensive line, who have gotten a resurgent season from their superstar left tackle in Tyron Smith that has spearheaded this ranking. The most pleasant surprise may be right tackle Terrance Steele, who was inserted into the lineup after La’El Collins was suspended for the first six games and has since taken the job from him. With Collins rumored to be working in at left guard to compete with Connor Williams, the line all of a sudden has tremendous depth with “problems” that many other units in the league would love to have. It should be noted that Smith is dealing with a bone spur in his ankle that limited him to 31 snaps in Week 8, although it is believed he can play through the discomfort moving forward.

The Eagles have only had one offensive lineman play more than 75% of their snaps this season and that is Jason Kelce (97% of snaps played), who is having an excellent season and is firmly one of the three or four best centers in the NFL. The team lost both of their starting guards in Isaac Seumalo and Brandon Brooks to injury over the first three weeks of the season, forcing multiple backups into the lineup for the majority of the first half of the year. The line’s best player in Lane Johnson also missed three games due to a personal matter. Line coach Jeff Stoutland has done a masterful job dealing with the turnover and now the starting five is set for the rest of the season barring additional injuries. With two elite players in Johnson and Kelce, plus two solid starters in Landon Dickerson and left tackle Jordan Mailata, this is an above average mix of youth, veterans, and talent.

Trent Williams is having a season for the ages and is the most dominant tackle in the NFL over eight weeks of the year. The rest of the unit has largely been solid this year minus right guard Daniel Brunskill having some rough moments as the weak link of the group. Mike McGlinchey has quieted some of the concerns about his shaky anchor that was a major issue last season and even during the preseason, which has given the line a much-needed functional starter again opposite of Williams. Inside Alex Mack was reunited with Kyle Shanahan for the third time in his career and has expectedly played well at the pivot. Laken Tomlinson remains a plus run-blocker with serviceable pass-blocking skills, making this a well-rounded group with one main weakness to work around in Brunskill.

There has been some shaky tackle play in Kansas City this season that has largely been exacerbated by QB Patrick Mahomes’ tendency to drift too deep in the pocket. This quirk of Mahomes has been masked in the past due to better tackle play from former starters Eric Fisher and Mitchell Schwartz, but also has been misconstrued among some mainstream media analysts that have labeled this line as one of the worst in the league. The fact is that the interior three have been absolutely outstanding this season with rookie Creed Humphrey being a top five center in the NFL fellow rookie Trey Smith being the steal of the draft. While the tackles have been average to mediocre at worst, they aren’t being helped by the scheme as much as their skill-sets suggest they should (Orlando Brown especially is a much better run than pass-blocker). If this offense can incorporate more of a downhill run game into their system the tackle situation would improve, but even if Andy Reid and the coaching staff keep the status quo with their approach (they’re a top 10 offense in yards per play, points per game, and 1st overall in 3rd down efficiency), they would likely be just fine with this offensive line. The key is really about reducing turnovers (KC ranks 26th in interception rate and 32nd in giveaways) and playing with better timing in the passing game to help the tackles.

New England’s line has been a little more up and down than expected heading into the season partially due to injuries (13 missed games between Isaiah Wynn, Shaq Mason, Michael Onwenu, and Trent Brown) and also rookie QB Mac Jones being erratic early in the year from the pocket. Their Achilles heel has really been the absence of Trent Brown at right tackle, which has been a black hole in his absence. Brown went down seven snaps into Week 1 and hasn’t played since, although he is expected to return in the next couple of weeks as long as he can work back from a nagging calf injury. If Brown can get back this unit will all of a sudden rid itself of a glaring hole and likely get closer to a top five group. If Brown doesn’t get back healthy, this is still a fringe top 10 unit with four of the five starters being solid or better.

The Colts have similar snap counts as the Patriots across their line, with one player over 82% of snaps played in Ryan Kelly (99%) and the line’s best player in Quenton Nelson at just 56% of snaps played. The unit has gotten solid play from Nelson’s replacement in Chris Reed, who is now challenging Mark Glowinski for the starting right guard job now that Nelson is back from injured reserve. Eric Fisher’s first year back from a torn Achilles resulted in even less stopping power in his anchor than he had before the injury, which has made his pass-protection shaky despite still being a plus run-blocker. Right tackle Braden Smith just returned after missing six games as well, so the arrow is pointing up for the second half of the season being much better than the first half since their best players are back healthy.