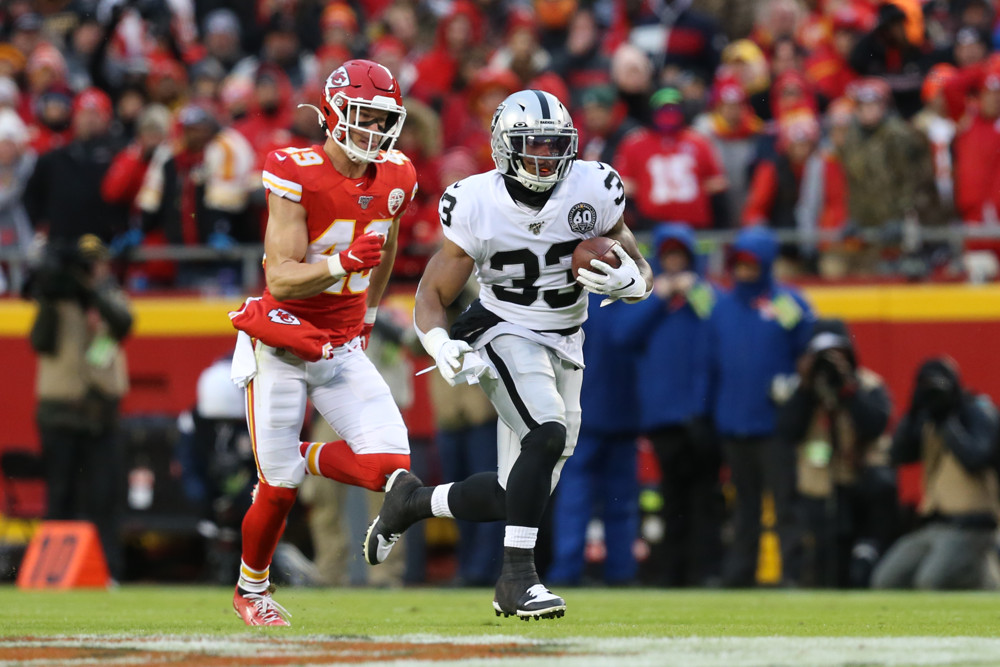 DeAndre Washington earned a spot in the monitoring section two weeks ago after filling in admirably for Josh Jacobs. With Jacobs out again (shoulder) for Week 16, Washington shouldered the brunt of the Raiders’ backfield work with 79% of attempts. He also ran a route on 47% of dropbacks and was targeted on 10% of passes. In two games filling in for Jacobs, Washington has posted 22 and 19 PPR points.

The Raiders still have a small shot at the playoffs if they win and get help from multiple teams (Dolphins, Chiefs, Ravens, Texans, and Colts) so there is a chance Jacobs returns (despite his leg infection surgery on Christmas day) should things be going the Raiders way during the early slate. If he doesn’t, Washington draws a negative matchup versus Denver but likely still carries a 13 to 15 point PPR floor given his passing game involvement.

With the No. 6 seed likely a lock for the Vikings, the team could choose to rest their starters in Week 17. Almost certainly, those receiving rest will include Dalvin Cook and Alexander Mattison who are both still recovering from injury. The door again remains ajar for Boone to provide fantasy value, but Week 16 showed he is game script dependent. In a trailing script versus the Packers on Monday Night, Ameer Abdullah took 59% of the snaps despite trailing Boone in attempt percentage (25% vs. 69%) due to the team’s preference for him in the passing game. Boone only ran a route on 19% of the team dropbacks while Abdullah saw 72%. The Bears are a team the Vikings shouldn’t trail heavily against, but they also aren’t a plus matchup for running backs making Boone a risky play.

After losing Rashaad Penny, Chris Carson, and C.J. Prosise to injured reserve over the past three games, the Seattle backfield pecking order is up for grabs. The team signed two former players in Marshawn Lynch and Robert Turbin this week, but neither are likely ready to handle a full workload. In Week 16, Homer stepped into the lead role playing 49% of the snaps after Carson and Prosise suffered injuries.

Head coach, Pete Carroll, has made it clear the team will rely on Homer first (at least for this week) and hopes to compliment him with one or both of the recently signed veterans. The Seahawks are the sixth most run-heavy team (43% run vs. 57% dropback) and run the ninth most plays per game (65). This is a backfield that can support more than one running back.

Johnson returned from injured reserve in Week 16 to play 32% of snaps while leading the team in rushing attempts (48%). However, the Lions stayed true to recent form keeping two other backs involved. Bo Scarbrough handled 38% of the rushing attempts, and Ty Johnson served as the primary passing-down option running a route on 32% of team dropbacks versus only 18% for Kerryon. The Lions may have been easing their former starter back after the long layoff but there seems to be little incentive to put him at risk in Week 17 with their season already over.

The Week 16 box score wasn’t kind to Thielen, but the underlying trends are positive over the past two outings. He has increased his snaps (51% and 93%) and routes per dropback (72% and 94%). He led the team in both categories in Week 16. While the Bears aren’t an easy matchup for wide receivers, Thielen appears to be healthy enough to stay on the field for a full game. The Vikings could choose to rest their starters in Week 17 with the No. 6 seed all but locked up, so monitor closely before deploying Thielen this weekend.

Wilson earned a spot in the monitoring section of this column last week and now has earned a spot in the positive trends section after another strong utilization week. Over the past two games, Wilson has finished second in snaps (80% and 73%) and routes per dropback (83% and 78%) behind DeVante Parker. Wilson is working primarily out of the slot (88% and 74%) on intermediate and underneath routes (5.2 season aDOT). The Dolphins draw the worst receiver matchup in Week 17 versus the Patriots where Stephon Gilmore will likely shadow Parker. Wilson and Mike Gesicki will need to pick up the slack inside versus more favorable matchups.

With Chris Godwin out due to a hamstring injury, Watson stepped in to run a route on 94% of Jameis Winston’s dropbacks in Week 16 versus the Texans. He was the second most targeted option on the team (19%) behind Breshad Perriman (25%). Watson has operated from the slot on 54% and 60% of his routes over the past two games, with Godwin vacating the role. Godwin has yet to suit up for practice as of Thursday this week, and Week 17 provides another soft matchup for the Bucs passing attack in the Atlanta Falcons.

Over the past two weeks, Lazard has squeezed Geronimo Allison out of the No. 2 role, besting him in snaps (78% and 75%) and routes per dropback (72% and 81%). In a passing offense without much spark beyond Davante Adams, there is room for Lazard to carve out meaningful targets. In week 16, he did just that with a season-high 23% target share. The Packers still have a reason to play well with the No. 1, 2, and 3 seeds all within the range of outcomes for their postseason. A week 17 matchup versus the Lions offers a great opportunity for Lazard to move beyond improving utilization into meaningful box score production.

The young speed demon saw a spike in utilization in his third game back from injury running a route on 85% of Andy Dalton’s dropbacks. Ross was the second most targeted receiver on the team (23%) behind Tyler Boyd (25%) and dominated Air Yards (48%). With aDOTs of 21 and 21.5 over the past two games, Ross offers a healthy big-play upside.

Renfrow returned from a three-week absence to post a season-high target share of 30% in Week 16 versus the Chargers. In three of the last four games Renfrow has played, he has finished first or second in targets. The young slot receiver is becoming a reliable option for Derek Carr in Jon Gruden’s west-coast passing attack. Despite snap limitations, Renfrow is on the field more often than not when the team chooses to pass (74% route per dropback rate in Week 16).

Week 16 marked the return of Gerald Everett to the Rams lineup, leaving Higbee’s utilization in doubt. However, Everett’s return ended up being a non-event. Higbee played 89% of snaps, ran a route on 72% of dropbacks, and led the Rams in target share (24%) for the third consecutive outing.