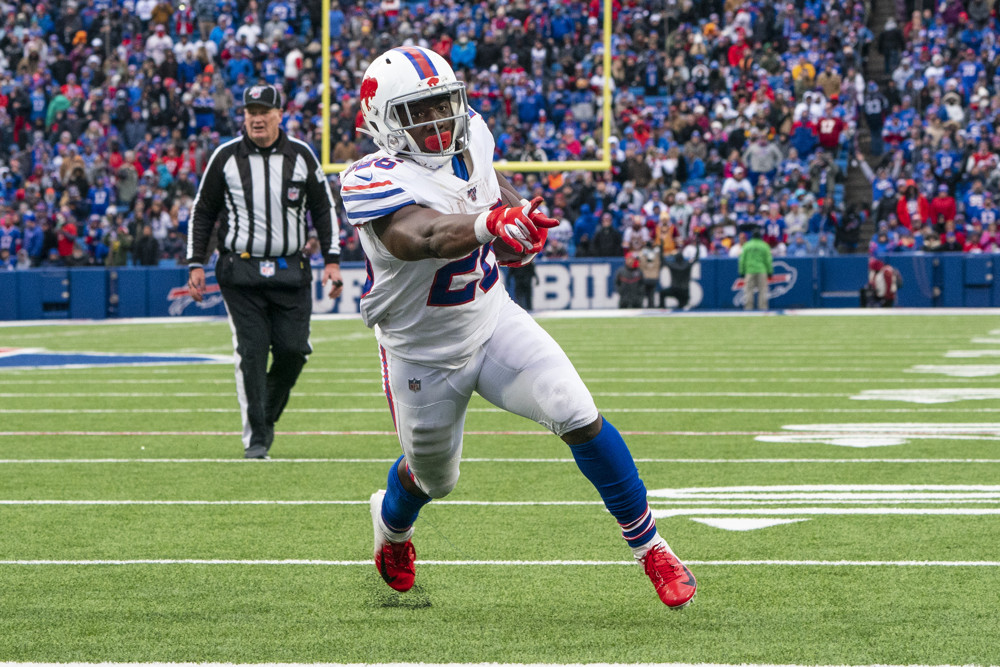 Josh Allen welcomes Stefon Diggs into his pass-catcher corps one offseason after John Brown, Cole Beasley, and Dawson Knox helped elevate Allen’s rookie passer rating from 67.9 to 85.3 and his adjusted yards per pass attempt from 5.4 to 6.7. Diggs colossally upgrades on last year’s No. 3 wideout rotation of Duke Williams and Isaiah McKenzie, transporting to Buffalo 2019’s league leader in yards gained on passes caught 20-plus yards downfield (635). In theory, Diggs is the antidote to Allen’s deep-ball struggles after Allen ranked 29th among 36 qualified quarterbacks in deep-ball passer rating last year. Nevertheless, Allen leads all QBs in rushing touchdowns (17) and is second behind only Lamar Jackson in rushing yards over the past two seasons, averaging 41 per game. A 30-touchdown-pass, 10-rushing-TD year on a 10- to 12-win team could vault Allen into genuine league MVP conversation. Patrick Mahomes, Jackson, and Dak Prescott are the only three quarterbacks I’d draft ahead of Allen.

Stefon Diggs was acquired from Minnesota in exchange for 2020’s No. 22 overall pick, fifth- and sixth-rounders, and 2021’s fourth-round selection in a deal likelier to pay real-life than fantasy dividends. Not only is Allen an inferior passer to Kirk Cousins, but Diggs’ target opportunity is destined to lessen in a deeper pass-catcher corps for a Bills offense that threw the ball only 2.9 more times per game than Minnesota last year. The red-flag history of wide receivers changing teams works against Diggs, as does Allen’s inaccuracy. In fantasy, Diggs moving to Buffalo benefits Allen significantly more than himself.

John Brown morphed from spiked-week producer to consistent WR2/3 in his first year with Buffalo, banking career highs in targets (115), catches (72), and yards (1,060), including 50-plus yards and/or a touchdown in 13-of-15 (87%) games. Even as Diggs’ addition seems certain to hurt the rest of Buffalo’s wideout corps, Brown’s superior rapport with Allen and dynamic skill set render him a 2020 value pick. I think Brown has a much better chance to remain the Bills’ receiving leader than most probably believe.

Cole Beasley injected life into the Bills’ 2019 slot offense, beating expectations en route to career highs in targets (106), yards per catch (11.6), and touchdowns (6). Beasley’s bottom line is severely undercut by Buffalo’s Diggs addition, however, while Beasley’s ceiling was always capped by the nature of his role within the Bills’ run-first attack. At age 31, Beasley makes sense only as a WR7/8 best-ball roster filler.

Dawson Knox played a far bigger rookie-year role than expected due to repeated foot and ankle injuries that zapped free agent pickup Tyler Kroft’s availability and effectiveness. Knox went on to play 61% of Buffalo’s offensive snaps as a third-round rookie, clearing 50 yards in just 3-of-16 games including the playoffs but finishing with 388 regular season yards, top 20 among rookie tight ends in the last decade. An 84th-percentile athlete with 4.64 speed at 6-foot-4, 254, Knox is an ascending talent in a less-than-ideal fantasy environment, especially with Kroft back healthy. Knox profiles as a boom-bust TE2/3 pick.

Devin Singletary overcame an early-season hamstring injury to pass Frank Gore down 2019’s stretch and average 20 touches over the Bills’ final six games, including playoffs. He ranked 11th among 50 qualified backs in PFF’s Elusive Rating and gained 3.0 yards after contact per carry, ranking 27th. At just 5-foot-8, 203, Singletary projects to max out as an RBBC leader rather than a true workhorse back, an opinion likely shared by the same Bills organization that drafted 223-pound Zack Moss in 2020’s third round. Moss figures to play ahead of Singletary in scoring position, where Singletary managed just two carries inside the five-yard line all last year. Also sharing Buffalo’s backfield with goal-line fiend Josh Allen, Singletary is a safe-floor but low-upside RB2 pick who probably won’t be a decider of leagues.

Zack Moss arrived in Buffalo as 2020’s 86th overall pick after setting school records at Utah for carries (712), rushing yards (4,167), and touchdowns (41). Although Moss lacks game-breaking speed (4.65), he is theoretically much better built for lead-rushing deployment than Singletary from a size standpoint and can hold his own in the passing game, where Moss caught 65 balls over his final three college seasons. Moss has more upside than meets the eye as a late-round re-draft pick, and he is underrated in Dynasty.

DraftKings set Buffalo’s Win Total at 8.5 after Sean McDermott’s club registered 9, 6, and 10 victories in his first three seasons and is clearly peaking in roster talent with the finally Tom Brady-less AFC East division at its weakest in many years. The Jets and Dolphins remain fledgling, while aggressively dealing for deep-ball wizard Stefon Diggs to prop up Josh Allen’s deep-ball inadequacies shows GM Brandon Breane is analytically building his team. The Bills are well coached and maintain staff continuity with McDermott, OC Brian Daboll, and DC Leslie Frazier returning. I think this can be an 11-13 win team in fortunate scenarios with positive injury luck and a third-year step up for Allen. I’m hammering this over.