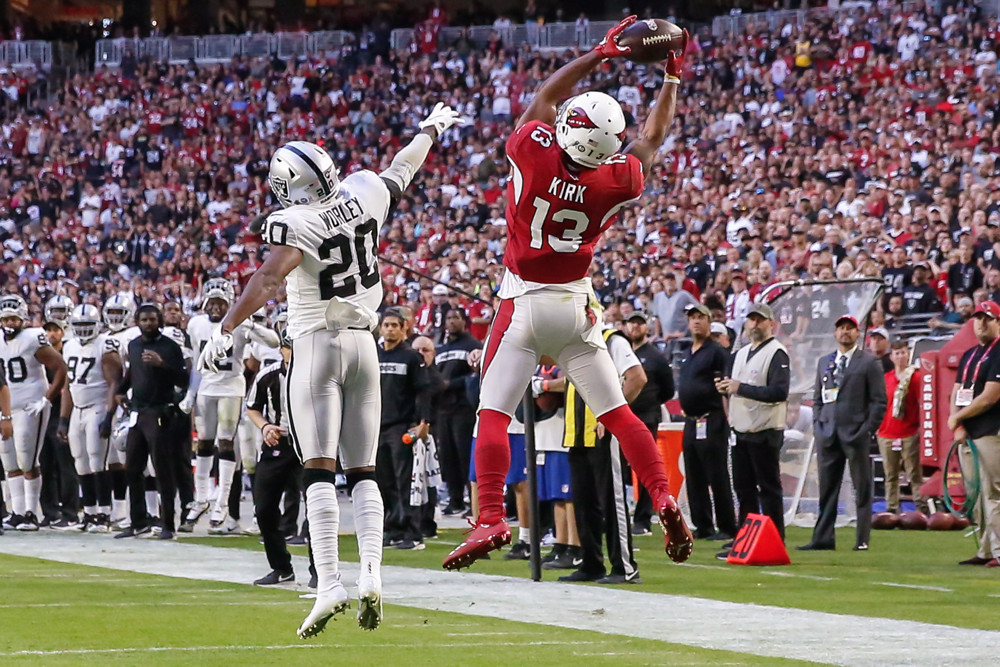 Welcome to the first edition of the 2019 Air Yards Buy-Low Model. The Buy-Low model uses target share and air yards to estimate a player’s expected production in the passing game, then highlights the players that underperformed relative to expectation. The key insight behind the model is that opportunity is sticky and production (in the form of catches and touchdowns) is not. You want to buy the signal and fade the noise, and the model helps us do just that. The out of sample r-squared for the model after one week of action is a very strong 0.52.

Week 1 in the NFL was a good one, and the talk right now is about the players that hit. Guys like Marquise “Hollywood” Brown and DeSean Jackson lit up the scoreboard and were in Milly Maker winning lineups. Other players, including a few with fantastic resumes, had poor weeks. Some are more likely than others to rebound, and the model has identified a list of 25 receivers (TEs and RBs are included when their passing game opportunity warrants) that deserve consideration in your DFS tournament lineups for Week 2.

It’s only one week in, and some players who will be studs saw lower opportunity than they will average over the course of the season. Here’s the list:

KEY
* Projection = The full-PPR projection the model gives for a player for the rest of the season based upon his opportunity in the previous three games. For this week, it’s based on just Week 1 data.

* Actual Week 1 FP = How many full-PPR fantasy points a player scored in Week 1.

* Christian Kirk ($4500 DK, $5400 FD) tops the list after seeing a 22% target share in Arizona’s Week 1 tie against the Lions. A quarter of the team’s Air Yards were directed his way, good for an average depth of target of 11.6, yet he only caught four of those balls for 32 yards. The model values his opportunity at 11.8 PPR points per game over the course of a full season, and he underperformed that expectation by a healthy 4.6 points. He’s a solid buy-low in the pass happy Air Raid offense Kliff Kingsbury is running, especially against the Ravens – a defense many will use as a reason to fade him. Defense doesn’t matter™ when all you need is one play to connect for a TD, but even if it did the Ravens secondary is banged up after losing CB Jimmy Smith (knee) in Week 1 and CB Tavon Young (neck) in August. Kirk was in on 82-of-88 snaps in Week 1.

* Robby Anderson was second to Jamison Crowder in Weighted Opportunity Rating in Week 1, but accounted for over half of the teams Air Yards, with 121 directed his way. He caught just 3-of-7 targets for 23 yards.

* Both Davante Adams ($7700 DK/$8200 FD) and Marquez Valdes-Scantling ($4600 DK/$5600 FD) make the list back-to-back. Green Bay opened the season looking anemic on offense and unsure of how to operate in head coach Matt LaFleur’s new system. Aaron Rodgers completed more passes than we’d expect from a clean pocket however – a good sign for future production. Play action was a bright spot for the team overall, and both Adams and Valdes-Scantling stand to benefit if LaFleur can somehow find it in himself to call more of the most efficient play type in football. Adams is high priced and might be lower owned due to recency bias, while MVS saw more Air Yards.

* Teammates James Washington ($3600 DK/$5500 FD) and Donte Moncrief ($4000 DK/$5400 FD) both make the list as well, owing to a terrible horrible no-good very bad night by Big Bender and the Steelers. Of the two, Washington profiles as having the higher value and is cheaper on DK.

* Mike Evans is too good to see just five targets, and Jameis Winston is not as bad as he looked week 1. The past two seasons have been the best of his career as he clocked in with a CPOE (completion percentage over expectation) over 3% in each despite attacking defenses deep with aDOTs approaching 11.0 yards each year. Hodl on Tampa Bay in general, and fire the guns on Evans.