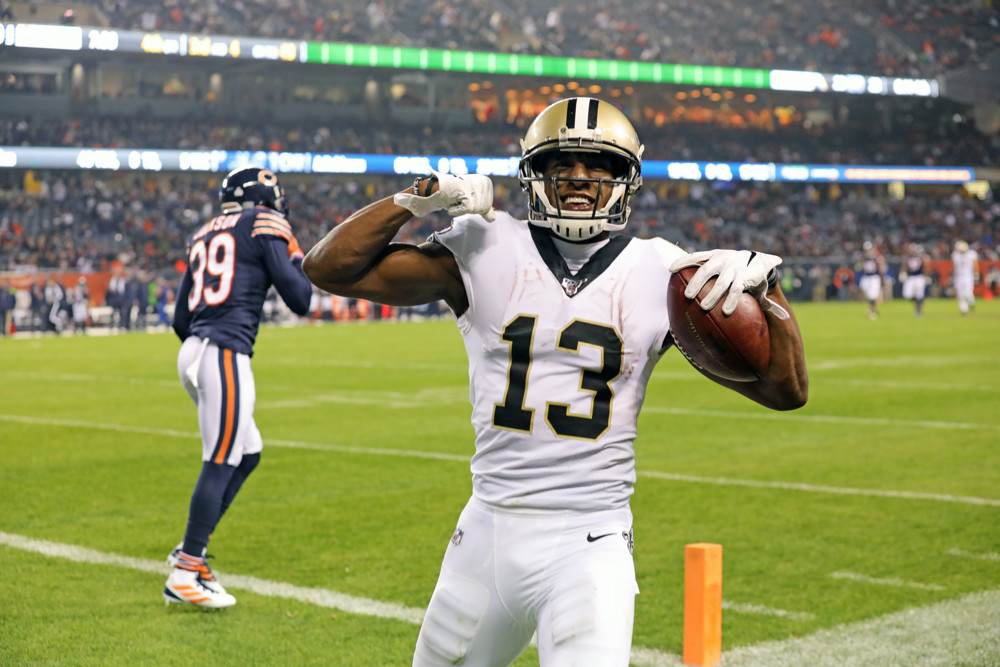 IMPORTANT Editor’s Note for DRAFT KIT SUBSCRIBERS: Make a deposit on Underdog Fantasy and get $10 on top for free! This offer is good for both new AND existing Underdog players. Follow the instructions here to claim your $10.

Why would you draft Davante Adams in Round 1 when you can get D.J. Moore in Round 4? I mean, go look at wide receiver ADP right now. You can draft WRs in line for significant volume in the late single-digit rounds.

As such, one of the prevailing mindsets among best ball drafters is to go running back early and backfill your roster with WRs, banking on volatility to scrounge three starting-caliber scores each week. At first glance, it looks like this aligns with league-wide usage trends. Gone are the days of Calvin Johnson getting 204 targets in a single season; Stefon Diggs led the NFL with 166 in 2020. Teams are using more and more WRs every year, increasing the number of viable fantasy options and making it a suboptimal decision to pick one of the best wideouts early in fantasy drafts.

Elites are indeed scoring fewer points relative to the WR population as a whole. The market share of total WR fantasy points scored by top-six and top-12 WRs has dipped in recent seasons. 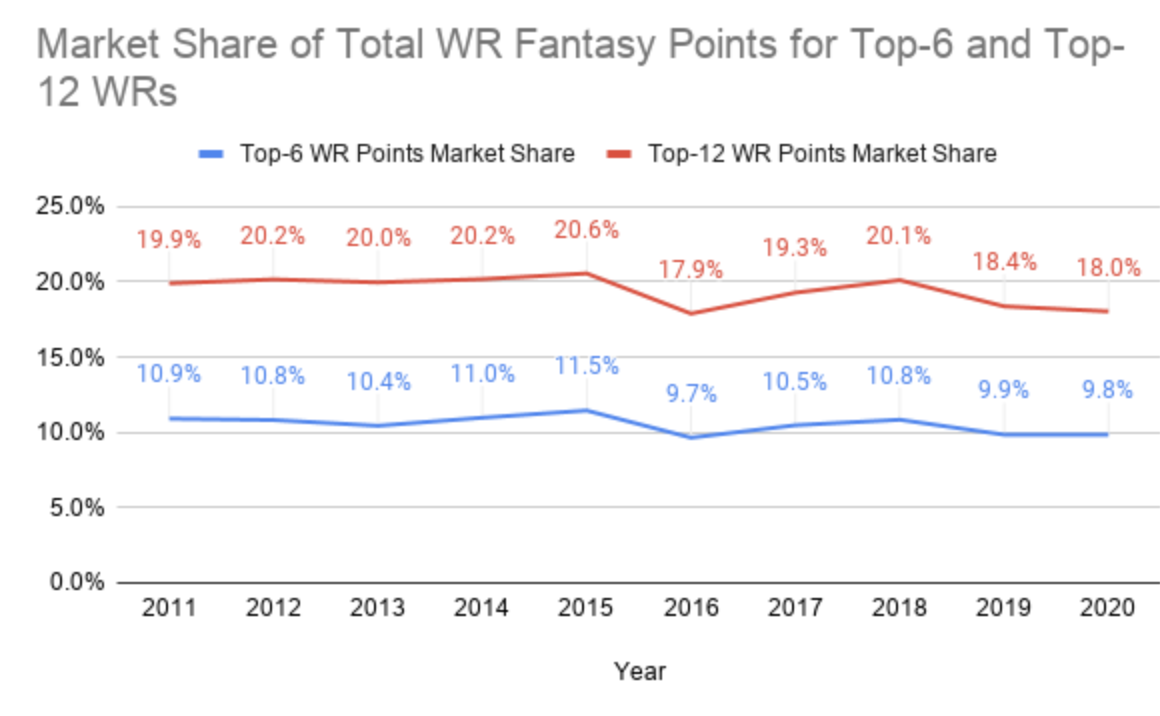 From 2011-15, top-12 WRs never accounted for lower than a 19.9% market share of points. Over the last five years, they have only exceeded that number once. It’s a similar story for top-six wideouts – i.e. the truly elite wideouts you’d have to pay up for in the following season. So, we know the best WRs have been relatively less productive as of late.

Scoring among fantasy WR2s and WR3s might be down as well (to a lesser extent). Still, it’s less clear how much other fantasy-viable options have been impacted, whereas it’s obvious top-12 guys are suffering.

What is clear is how much the gap has shrunk between WR1s and their lower-tier counterparts. The table below shows how many points top-12 WRs have scored each year vs. WR2s and WR3s combined. The ratio has dipped in recent years (except for 2018, which looks like an outlier). WR1s are scoring the same or fewer points as before, while WR2s and WR3s are scoring more.

None of that is actionable information on its own because everything in fantasy is ADP-dependent. We need to know if the market has adjusted.

The answer is definitive: WRs are going later than ever. I only have best ball ADP (via Fanball) dating back to 2015, but even over the last few years, drafters aren’t valuing elite WRs like they used to.

That makes sense. WR scoring is down at the top and there’s an illusion that the position is deep because you can get real-life starters in the double-digit rounds.

Now, the question becomes whether the market has shifted enough. There’s no perfect way to quantify that, but the best way is to use draft position-adjusted win rates to figure out when it’s viable to take a wideout. Basically, the expected win rate in a 12-team league is 8.3% (100 percentage points and 12 teams), but your expected win rate is highest if you get the first pick. It’s especially important to adjust for draft position in this exercise because most teams that take a WR early are picking near the end of the order where expected win rate is lowest. For example, teams picking last have just a 6.1% win rate over the last five years. However, the chart below shows that picking a WR with the 12th pick has increased your expected win rate by 0.9% over the last five seasons.

You can throw out the first few numbers because the sample size of drafts is too small. Also, with the whole first round, keep in mind that we’re only dealing with a few individual players. For example, Michael Thomas busting in 2020 had a massive impact on these numbers because very few WRs have been picked in the mid-first round since 2016. We should look at overall trends in the first two rounds rather than a single pick, and those overall trends seem to tell us that the opportunity cost of drafting a WR in the first two rounds is too high.

It’s worth pointing out that it becomes more reasonable to take a WR at the end of Round 1 – which is typically where the first tier of WRs gets drafted. From the ninth pick to the 14th pick, the win rate over expectation is positive.

It dips back below zero after that for a few picks, but the overall figure for Round 2 is -0.4%. That’s subpar, but it’s also not enough to say that you shouldn’t take a WR in Round 2 even before you factor in that elite WRs are being picked later than ever. In other words, that -0.4% could just be variance over a small sample size, and if it’s not, it could be mitigated by the fact that you can now get high-end WRs cheaper.

Looking at the earlier ADP table above, we can see that 2020 is the first year where WR ADP really fell off a cliff – and it might be even more drastic in 2021. With only one year of data, it’s tough to say how that should affect early-round strategy.

What is clear is that after the first two rounds, you’re going to want to hammer WR. The “RB dead zone” in Rounds 3-6 is well-documented, and you’d be wise to target WRs regardless of your build through the first two rounds, as evidenced by the big patch of green we see particularly in Rounds 4 and 5 in the win rate above expectation graphic above. It’s in this range that we move away from the elite guys and into the WR2 ranks.

At the end of the day, we need more data to determine the equilibrium point of where elite wideouts should go. Here’s what we do know: