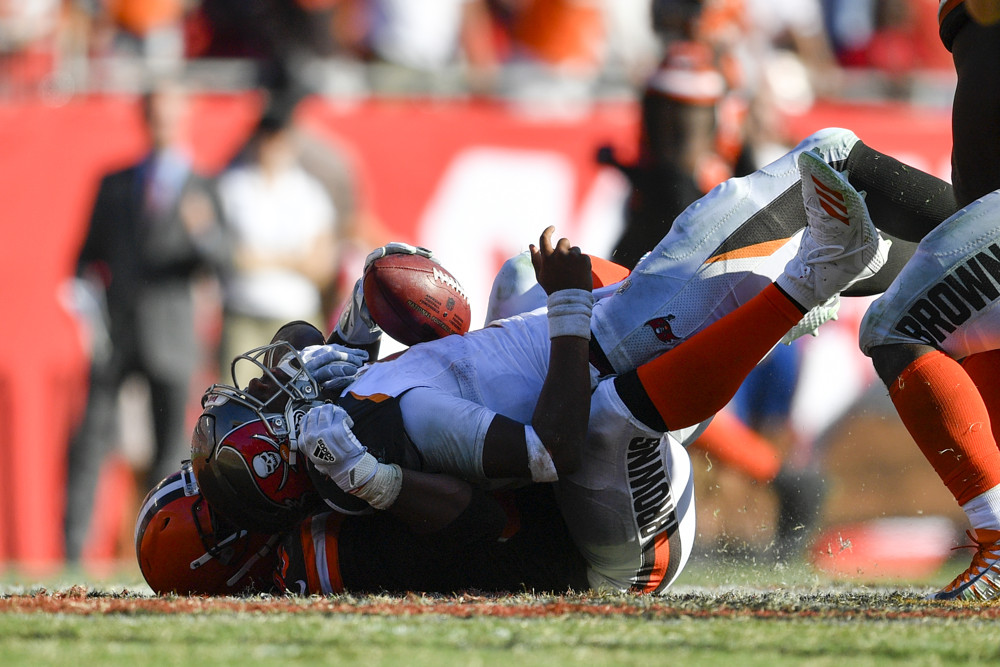 The optimal way to select a defense in DFS is to think in terms of big events, not points allowed. Just 2.3% of games last season ended in a shutout and only 9.7% ended with one team being held to six points or fewer. In other words, targeting the “points allowed” category is a fools errand.

The real fantasy points come from sacks, forced fumbles, interceptions and defense touchdowns. All of these events are by far most likely to happen when a quarterback is under pressure. The best possible outcome on a single play for our defense is a strip sack which results in a defensive touchdown as we get one DraftKings point for the sack, two for the fumble recovery and six for the touchdown.

Tennessee enters the season down their best player on the line with left tackle Taylor Lewan suspended for the first four games. At right guard, Kevin Pamphile is slotted to start after rookie 3rd round pick Nate Davis missed two weeks of training camp, delaying his entry into a starting role. Replacing Lewan is swing tackle Dennis Kelly and despite having 27 starts under his belt while performing admirably in spot duty, is outclassed against super freak Myles Garrett.

At just 23-years old and entering his 3rd NFL season, Garrett is already an elite edge rusher in the NFL despite winning primarily with his rare physical tools (size, speed, mobility) rather than a diversified pass-rush plan most other elite pass-rushers possess. This is a scary proposition considering Garrett nearly doubled his sacks from Year 1 (7) to Year 2 (13.5) while still having another level to get to as a player as he continues to add moves to his arsenal.

Add in the fact that the Browns have DT Larry Ogunjobi with recently added DT Sheldon Richardson and DE Olivier Vernon to force attention away from Garrett, and we are looking at a stacked defensive front with one of the favorites for defensive player of the year in Garrett.

Tennessee first year offensive coordinator Arthur Smith has had plenty of time to prepare coming into this game but there is only so much you can do down your best O-lineman (Lewan) with a backup caliber player forced into the lineup (Pamphile), and high-level pass-rushers coming from every angle.

With this game in Cleveland, there is another challenging, often overlooked layer to pass-protection in hostile environments that the Titans OL will have to overcome, specifically on obvious passing downs if they are behind or the game remains close. Crowd noise makes it increasingly difficult for OL to communicate pre-snap, making non-verbal communication that comes with continuity invaluable (something the Titans don’t have right now).

Oakland enters the year down their starting guards with significant drop-offs behind them. Rodney Hudson at center and Trent Brown at right tackle are in the top-5 of their respective positions and should help this unit stay afloat, but Kolton Miller at left tackle is a liability against good or better pass-rushers which Bradley Chubb certainly is.

Chubb burst onto the scene as a rookie with 13 sacks and 57 pressures, largely playing over the left tackle with All-Pro Von Miller garnering the bulk of attention on the opposite side. This dynamic created a catch-22 for most offensive lines without the necessary bookend horses to match them 1-on-1, forcing them to pick their poison, freeing up Chubb with advantageous matchups.

Miller struggles mightily as a pass-protector, particularly with getting out of his stance to reach his spot before the rusher, forcing him to turn his shoulders and open his hips prematurely away from the line of scrimmage. Chubb has a quick enough first step to initiate this flaw in Miller’s game, while having very good ability to convert speed to power that can result in Miller being put on skates.

Devey is a journeyman backup on his 4th team in 6 years, providing Miller with little assurance or experience to help mitigate the extensive stunts they will likely see on that side of the ball from Chubb, Harris, Wolfe, and Jones, leaving the left side of the OL in a tenuous situation.

Derek Carr will need to be wary of not just his blindside but also remain cognizant of backup Denzelle Good being overmatched on the opposite side. Hudson’s presence can help lessen the burden on at least one guard at a time, but there will be plenty of opportunities for Broncos head coach Vic Fangio and defensive coordinator Ed Donatell to dial up exotic looks to isolate Oakland’s weak links up front.

With Trent Williams, the Redskins have a Top-4 left tackle in football and an above average offensive line. Without him the drop-off is massive. 36-year-old Donald Penn was a shrewd signing to help fill the gap since second year tackle Gerod Christian is not ready to be a starter, but Penn hasn’t played left tackle since the 2017 season and is coming off a groin injury that landed him on injured reserve early last season.

Penn combined with Flowers have 229 starts between them so that experience should help them sort out protection responsibilities, but it will only go so far. The right side of the line is very good, but the left side is a liability with Penn’s physical capabilities in question and Flowers being a technical mess. Poor hand usage has plagued Flowers’ time in the league and that is usually exacerbated moving inside where the game is faster, contact happens quicker, and the margin for error is smaller.

Add in the fact that the Eagles have quality (Brandon Graham, Malik Jackson, Derek Barnett) and in some cases dominant pass-rushers (Fletcher Cox) at every position on their defensive line and you have an unequitable situation for an already hurting Redskins offensive line to deal with.

The Bucs come into the year with a below average offensive line ranked 23rd in my OL power rankings. 49ers defensive coordinator Robert Saleh led this group to 37 sacks as a unit last season which was the most by the team since 2013, but still ranked in the bottom half of the NFL. Enter new DL coach Kris Kocurek, a well-respected coach known for generating a pass-rush by putting his defensive ends in a Wide-9 alignment to generate pressure on the QB using speed off the ball, fitting Dee Ford’s skill-set to a tee.

Ford and Nick Bosa were added via free agency and the draft, massively upgrading the edge rushing on this defense while elite tiered DT DeForest Buckner remains one of the top pass-rushers in the league from the interior. Solomon Thomas and Arik Armstead provide solid rotational rushing options alongside Buckner.

Bucs LT Donovan Smith was re-signed to a big extension despite being a below average starter while 2018 3rd round pick Alex Cappa is inserted to the lineup at guard after struggling in spot duty as a rookie. These are the two weak spots that the 49ers revamped front should be able to exploit.

The Bucs are in a new system predicated on a deep passing game so if the 49ers offense can get out to an early lead this could be a track meet for the 49ers formidable front that the Bucs OL will struggle keeping up with.

Houston made a splash by acquiring fringe top-10 LT Laremy Tunsil from the Dolphins, but it still leaves the rest of the line as a bottom five unit with major question marks, none more glaring than at left guard and right tackle.

Cam Jordan is an elite rusher (12 sacks, 71 pressures in 2018) that predominantly wins with power and masterful hand usage that leaves blockers grasping at air if they aren’t being driven into the quarterback’s lap. Seantrell Henderson is among the bottom 5 starting right tackles in football, making this a glaring mismatch.

Compounding the issue is rookie Tytus Howard at LG and having to kick inside to try and salvage not being able to secure a tackle spot for which he was drafted to play while having to deal with Sheldon Rankins’ explosive power as a rusher. RG Zach Fulton is an adequate starter at best that excels mostly as a run-blocker, and with Rankins playing the 3-technique over either guard both will have their hands full trying to slow him down.

2018 first-round pick Marcus Davenport enters his 2nd year with big expectations after some impressive flashes as a rookie as a right defensive end, giving this Saints defense a pass-rusher with much-needed juice opposite of Jordan.

Expect QB Deshaun Watson to have to pick up where he left off last season; having to deal with inconsistent pocket formations, evade pressure, and extend plays with his legs.

6. Seahawks DL vs. Bengals OL –  Bengals OL on the road in front of Seattle’s crowd while being a bottom-3 unit in my power rankings is scary. Seattle already had a solid defensive front and just added Jadeveon Clowney. It looks like the Bengals will have to start Andre Smith at left tackle with Cordy Glenn (concussion) doubtful.

7. Lions DL vs. Cardinals OL – Arizona’s offensive line is a bottom-5 unit against a revamped, deep Lions front. The Cardinals’ interior will be stressed facing off against the loaded Lions interior featuring Damon Harrison, Mike Daniels, A’Shawn Robinson, Da’Shawn Hand, and Trey Flowers. And that was before Cardinals LT Marcus Gilbert, their best offensive lineman, was ruled out.