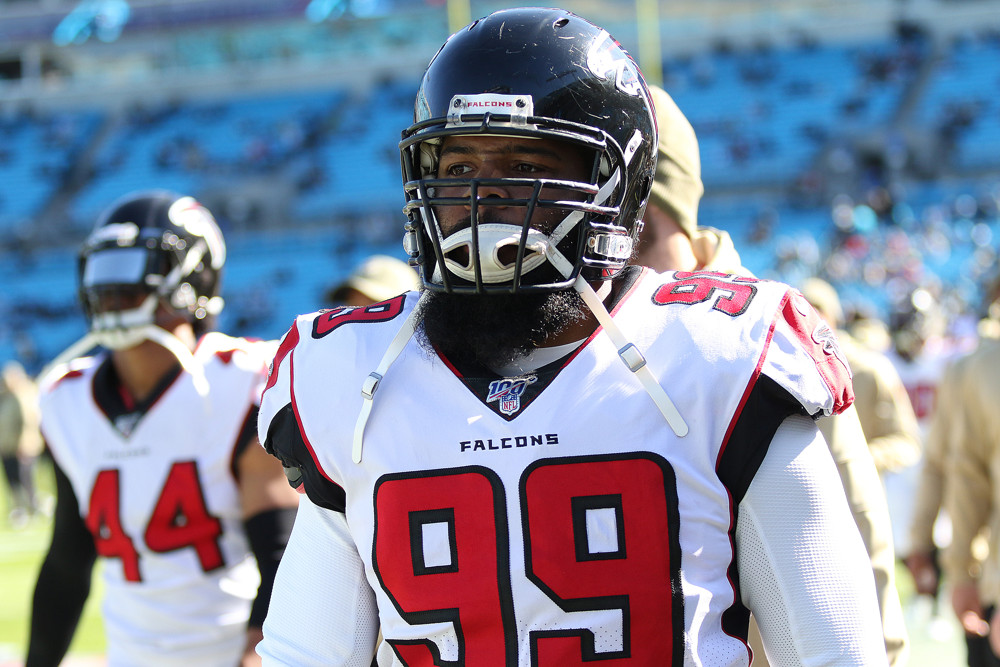 Editor’s Note: At the bottom of this article, you’ll find Brandon’s take on one of the slate’s biggest questions — what’s going on with the Falcons defense over the last two weeks?

With that in mind, below you’ll find the biggest mismatches between defensive and offensive lines for Week 12. The objective is to project QB pressure through film study, injuries, scheme, coaching and talent.

1. Steelers DL vs. Bengals OL
Key matchups: DT Cameron Heyward vs. Bengals interior OL, OLB T.J. Watt vs. RT Bobby Hart
Notes: The Steelers DL ranks 2nd in adjusted sack rate, 5th in team pass rush win rate, 5th in sacks per pass attempt. T.J. Watt is 3rd in sacks (10.5) and 2nd among edge-rushers in pressures (53). The Bengals OL ranks 21st in adjusted sack rate, 31st in team pass block win rate, 24th in sacks per pass attempt, and is 29th in pressures and hurries given up. Bengals LT Cordy Glenn is slated to make his first start of the season after dealing with a concussion.

The Steelers are coming off a debacle of a game against the Browns and one of their worst games as a DL group just a week after their best performance of the year vs. the Rams, so they are due for a bounce back game. The Bengals have a bottom three OL in the NFL and while Cordy Glenn’s return will go a long way towards keeping Bud Dupree in check, the rest of their line is severely overmatched on an individual basis against the likes of Cam Heyward, T.J. Watt, and Javon Hargrave.

Watt has made significant improvements as a pass-rusher this season after the bulk of his 13 sacks in 2018 were as a result of winning inside or effort sacks due to his non-stop motor. This season Watt has demonstrated a variety of ways to clear the hands of blockers to soften the edge and get around the corner, elevating his game to another level. Bobby Hart’s biggest struggles come as a pass-protector, specifically with his strike timing and hand placement, so Watt has a strong chance at continuing his sack streak (currently at 7 games in a row with at least .5 sack).

Carolina’s OL is coming off a disastrous game against the Falcons’ resurgent defensive line with tackles Greg Little and Taylor Moton having the worst games of their career. It will be much more difficult this week vs. Cameron Jordan, Marcus Davenport, and Trey Hendrickson so expect Dennis Daley to have a shot at starting if he is healthy enough to go. Regardless of who is in at tackle they will be outmatched and their struggles in pass-protection have only been exacerbated by QB Kyle Allen’s poor pocket presence as of late.

The Panthers are playing for their playoff lives at this point in a loaded NFC but traveling to New Orleans with a one-dimensional offense that is heavily reliant on RB Christian McCaffrey and a reeling young QB limits their avenues for success both as an offense and offensive line.

The Packers are traveling to the West Coast after their bye week with a red-hot group of pass-rushers led by Za’Darius Smith. Smith’s ability to win aligned either outside the tackle or over the guard with power and advanced hand techniques present a major problem for rookie backup LT Justin Skule and LG Laken Tomlinson.

Inside of Smith is Kenny Clark, an absolute beast in the middle that does a lot of the dirty work for this front yet still leads the NFL in QB hurries among interior DL this season with 36. Clark will be able to have his way with all three interior linemen on the 49ers but especially the guards.

The 49ers have given up an astounding 47 total pressures over the last two weeks against the Seahawks and Cardinals, which contributed to them landing on this list because the Packers have more quality pass-rushers then either of those teams.

The Titans are coming off a bye week and are at home in what is a critical divisional game for each team. The Jaguars are due for a bounce back game as a defense after getting gashed by the Colts while giving up 200+ yards on the ground in back-to-back weeks. Their struggles as a run defense (29th) have limited their ability to get after the quarterback since teams are running all over them, yet the DL has managed to remain extremely productive due to their loaded group of pass-rushers.

Tennessee RB Derrick Henry is capable of going off in this game but was held to 44 yards on 17 carries against this defense in their Week 3 matchup and this running game as a whole ranks 22nd in rushing DVOA while the OL is 19th in adjusted line yards.

Jaguars DEs Josh Allen and Yannick Ngakoue are a dynamic mix of speed (Ngakoue) and power (Allen) that should be able to wreck havoc on stunts with Campbell rotating sides. Davis is the weak link of the OL and playing alongside the sluggish Jack Conklin at RT exposes a big mismatch that should get exposed as this game plays out. If Jacksonville can even be below average vs. the run there will be plenty of opportunity for their DL to rack up hurries, pressures, and sacks.

5. Eagles DL vs. Seahawks OL
Key matchups: DT Fletcher Cox vs. RG D.J. Fluker, DE Brandon Graham vs. RT Germain Ifedi
Notes: The Eagles DL ranks 21st in adjusted sack rate, 6th in team pass rush win rate, 21st in sacks per pass attempt, and 15th in total sacks with 25. Brandon Graham ranks 3rd in QB hurries (32) out of edge-rushers off the left side and 5th in pressures (42). Fletcher Cox ranks 3rd among DTs in pressures with 42. The Seahawks OL are 20th in adjusted sack rate, 28th in team pass block win rate, and 20th in sacks per pass attempt. They rank in the bottom 8 for the most pressures (121) and hurries (90) given up.

Seattle comes out of their bye traveling to play a Philly team desperate for a win to remain in the playoff hunt. The Eagles DL played well against the Patriots despite the 17-10 loss with Fletcher Cox continuing to garner an enormous amount of attention while Brandon Graham reaps the benefits of having 1-on-1 matchups alongside of him.

These two will present major problems for the integrity of the pocket against a middling Seahawks OL that is particularly weak on the right side where Cox and Graham align. QB Russell Wilson is excellent vs. pressure and will have to likely deal with a lot of it again this weekend.

BONUS SECTION: What to make of Atlanta’s defensive resurgence

The Falcons went into their Week 9 bye week as a reeling team on a six-game losing streak and arguably the worst defense in the league. Head coach Dan Quinn’s successful defensive background only intensified calls for his job as the unit was giving up 31 points per game with a league-low seven sacks and two interceptions after a season in 2018 in which the defense ranked 31st in DVOA.

What has transpired over the last two weeks has been nothing short of remarkable as the team has reeled off consecutive victories on the road while the defense has been transformed; giving up 12 total points, allowing zero TDs, notching 11 sacks, and doubling up their interception total with four.

How did it happen? First, Quinn moved wide receivers coach Raheem Morris back to his roots on the defensive side, making him the defensive backs coach while splitting play calling duties between Morris and linebackers coach Jeff Ulbrich.  Ulbrich took over 1st and 2nd down play-calling duties while Morris handles 3rd and 4th down.

There were several personnel changes including switching safeties Ricardo Allen and Damontae Kazee between free and strong, while shuffling the defensive line around. The result has been significantly better communication on the backend, which has led to more opportunities for the likes of DE Adrian Clayborn and Vic Beasley.

Clayborn’s usage went from approximately 35% to 60+% snaps in place of Allen Bailey while Beasley has been switching sides the last couple of weeks rather than play from his usual alignment over the right tackle. These two moves have provided a spark to the pass-rush evident by Clayborn having more pressures (16) and Beasley having more sacks (2.5) the last two weeks then either of them did over the first seven weeks combined.

Clayborn’s rise in playing time has really been the catalyst for the improvement in their defensive line as his blend of power to go along with a nasty cross-chop move have taken the pass-rush to another level. Beasley’s newfound ability to switch sides has invigorated his game to an extent while having Tak McKinley spell him provides the defensive line serious bull-rushing capabilities with Clayborn on the opposite side, oftentimes restricting the pocket while isolating the defense’s best player in Grady Jarrett against guards.

As impressive as this defensive turnaround has been, there are several important pieces of context needed to help put their performance into perspective. First, in their Week 10 win over the Saints LT Terron Armstead missed the prior week of preparation with the flu, losing weight, sleep, and his voice in the process. He was clearly not himself so that factored into Clayborn being able to record six of the team’s 25 pressures. LG Andrus Peat got injured after 21 snaps, forcing backup center Will Clapp into the lineup for the remaining 47 snaps since the primary backup (LG Nick Easton) was inactive.

In Week 11 they had the luxury of playing the Panthers and undrafted second-year QB Kyle Allen, who started off hot but has since regressed into a marginal QB at best. Allen’s poise in the pocket has gradually eroded to the point of being a liability, while rookie LT Greg Little returned to action for the first time since Week 3 and was a turnstile.

Despite having some extremely favorable circumstances during their winning streak, the defense as a whole has significantly improved and I don’t expect it to be a total mirage. Even if the defense regresses into a solid or above average unit it will be a major improvement from their performance over the first seven games.

Another factor working in their favor is their remaining schedule, with four of their six games coming against teams with a combined 12-13 record. Aside from their Weeks 13 and 15 matchups against the Saints and 49ers, the rest of the games are very winnable due to Dan Quinn’s coaching and personnel changes coming out of the bye.