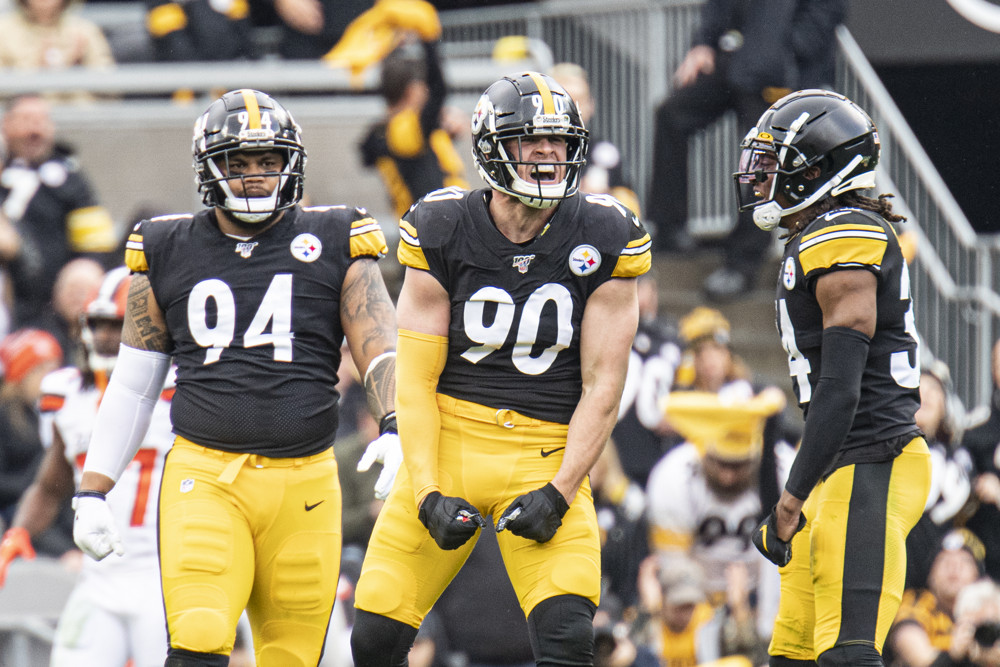 With that in mind, below you’ll find the biggest mismatches between defensive and offensive lines for Week 16. The objective is to project QB pressure through film study, injuries, scheme, coaching and talent.

Easily the biggest mismatch of the week, Pittsburgh has massive advantages with their best players in T.J. Watt and Cameron Heyward facing marginal starters at best in Brandon Shell and Alex Lewis.

Shell struggles getting to his set points vs. good or better speed off the edge and even more so when they can string together moves to knock his hands down. Watt has been doing exactly that all year plus can win inside with a couple different speed counters. Heyward is a bull in a china shop on the interior and Lewis is more of a zone-oriented athletic type of blocker that doesn’t have the anchor to hold up against the best bull-rush in football, which Heyward possesses.

Add in the fact that Javon Hargrave has a favorable matchup opposite of Heyward and you’re looking at the shoe-in for top mismatch of the week in the trenches.

This is where things get interesting as the Vikings are 7-0 this season when playing indoors, 9-1 on turf, and the only team in the NFL that is undefeated at home (6-0). Minnesota will also be attempting to avenge their 21-16 Week 2 loss to the Packers while needing a win to have a shot at winning the division, but at 10-4 a trip to the playoffs is pretty much secure regardless, so I’d expect Dalvin Cook to sit to ensure he’s 100% for the playoffs.

The Vikings’ defense goes up another level playing at home (giving up 14.2 points per game as opposed to 21.8 on the road) and should be able to keep this game close, but their offensive line is outmatched nearly across the board, primarily against the likes of Za’Darius Smith and Kenny Clark.

Smith and Clark account for 136 pressures between them, good for the most in the NFL among any edge-interior rusher pairing (Aaron Donald & Dante Fowler Jr. are 2nd at 128) and both Za’Darius and Preston Smith move around the front, presenting a lot of problems to protection schemes with their length, power, and refined pass-rush moves.

Clark has destroyed the interior of this OL many times over the last few seasons and that was without the Smiths to draw attention away from him. Even with Garrett Bradbury and Pat Elflein playing much better than early on in the season, neither of them or RG Josh Kline can hold up in pass-protection against this group of rushers, particularly if the running game gets stalled due to Cook’s likely absence.

The Bears OL are coming off a game in which they struggled mightily to pass-protect against the Packers dynamic front and now take on a very talented DL that just added Terrell Suggs to the mix.

Chris Jones has been great all season and his blend of size, athletic ability, and power is a terrible matchup for the undersized, quickness-based skill-set of Cody Whitehair. Frank Clark has been heating up lately after dealing with a neck injury most of the year and brings elite-level explosiveness to the Windy City with a huge mismatch against RT Cornelius Lucas.

Suggs will add much-needed depth to the position as well as one of the most savvy minds at the position. Offensive tackles revere Suggs ability to find weaknesses in their game and exploit them even to this day, so while his physical abilities are fading with age, his ability to put stress on opposing tackles has not. This is an extremely difficult test for even an improved Bears OL as of late that I would expect to not go well for them as pass-protectors.

Atlanta’s OL has been depleted with injuries this season, particularly on the interior and despite getting rookie 1st rounder Chris Lindstrom back from injury in Week 14 are not equipped continuity or experience-wise to handle this Jacksonville front. Calais Campbell continues to be one of the most difficult players to prepare for in terms of alignment because he plays everywhere and has such a unique skill-set. Yannick Ngakoue had a monster day last week and paired with Josh Allen are lopsided matchups for RT Kaleb McGary, who struggles most with speed off the edge, something each of these two has in spades.

Playing on the turf in Atlanta should only speed up an already fast set of rushers while Campbell has his pick of litter in terms of matchups to exploit. This has potential to be a vintage ‘Sacksonville’ performance on Sunday.

The Raiders have been one of the five or six best units in the NFL this season and the data doesn’t suggest a mismatch but in recent weeks Oakland has lost starting RT Trent Brown for the season, inserting Brandon Parker into the lineup. Parker is an extremely physically talented player but is below average in his technique, especially using his hands on an island. Facing one of the league’s truly great technicians in Joey Bosa this week is a glaring mismatch that deserves recognition on this list.

Apart from this is the fact that Melvin Ingram’s speed off the edge can give fits to LT Kolton Miller, a blocker that succeeds mostly against power-rushers and has reverted to some bad habits as of late. Ingram can also do damage when he and Bosa line up on the same side with Ingram over RG Gabe Jackson, another mauling type of guy that struggles with speed.

The Raiders as a whole have lost four in a row and look discombobulated offensively despite having an elite pairing on the interior in Richie Incognito and Rodney Hudson, making them ripe for a bad day up front against one of the most dangerous pass-rushing duos in the NFL.