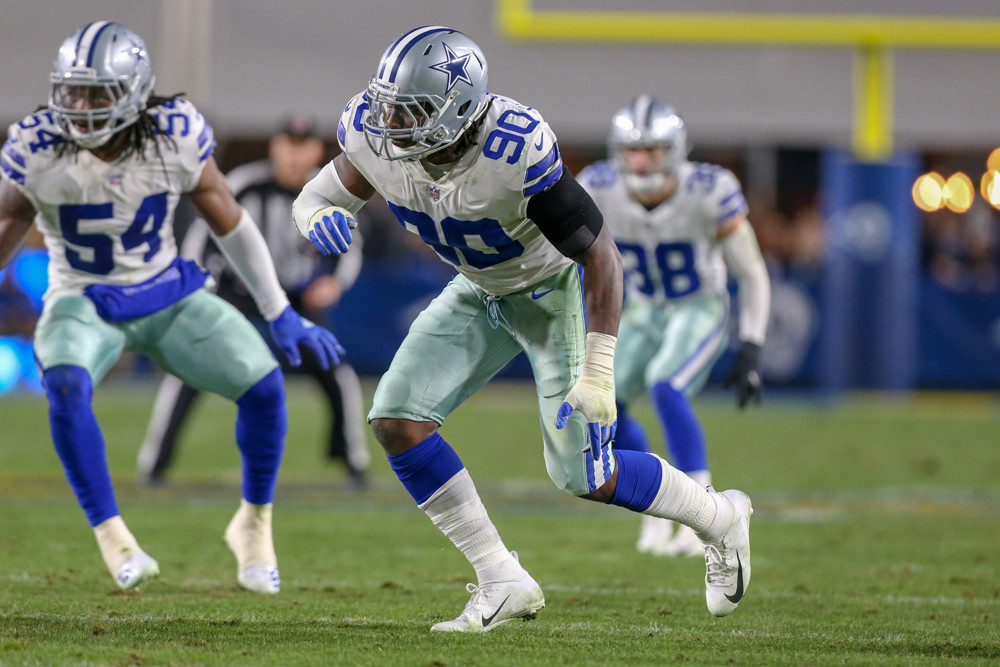 With that in mind, below you’ll find the biggest mismatches between defensive and offensive lines for Week 3. The objective is to project QB pressure through film study, injuries, scheme, coaching and talent.

1. Cowboys DL vs. Dolphins OL
Key matchups: DE Demarcus Lawrence vs. RT J’Marcus Webb, DE Robert Quinn vs. LT Jesse Davis, DT Maliek Collins vs. RG Danny Isidora
Notes: Dolphins rank 29th in pass-protection DVOA per Football Outsiders and are tied with the Texans for 32nd in sacks given up (10) through the first 2 weeks. Cowboys DE Robert Quinn is returning after being suspended the first 2 weeks.

The Dolphins are far and away the worst team in the league with the worst offensive line. It would be easy to slot them as one of the five worst units each week for the pressure they will likely give up, but it is especially true this week in Dallas.

Demarcus Lawrence started a bit slow in week 1 due to an excellent performance from Giants RT Mike Remmers and the Giants right side of the OL, but started to heat up in Week 2 against Redskins RT Morgan Moses. In Week 3, he faces a journeyman signed off the street two weeks ago in J’Marcus Webb.

With Lawrence garnering most of the attention, Collins is in line to most benefit and has been impressive in film study through the first 2 weeks. He’s primarily faced elite right guards (Brandon Scherff & Kevin Zeitler) so he hasn’t been able to be productive on the stat sheet, but has flashed impressive explosiveness and some pass rush moves that will likely give trouble to Danny Isidora, but also the entire interior.

Quinn’s return from suspension provides a big boost to this DL and finally gives them an above average pass-rusher opposite of Lawrence. This is also Robert Quinn’s first game against the team that traded him for a 6th round pick last March, so “revenge game” potential should be considered against an inferior opponent.

2. Chargers DL vs. Texans OL
Key matchups: DE Joey Bosa vs. RT Roderick Johnson, DE Melvin Ingram rushing from the 3-technique against both guards.
Notes: The Texans OL has given up 10 sacks (tied for 1st) through 2 weeks and have a league-worse 14.2% adjusted sack rate per Football Outsiders (accounts for sacks per pass play, opponent quality, down & distance).

Aside from Laremy Tunsil at LT (who is very good), Houston has only one solid starter in center Nick Martin, and have a revolving door at right tackle, with Johnson starting the first game of his career last week.

Joey Bosa looks explosive on tape with the same stellar hand usage he’s always had and will be a nightmare for Roderick Johnson to block without slide, chip, or alignment help. Ingram continues to be one of the more disruptive interior rushers in the league (see Week 1 vs. Colts RG Mark Glowinski), with the speed, footwork, and change of direction ability that can make guards’ heads spin.

The Chargers defense has just two sacks this season (Bosa/Ingram each with 1) but this is the sort of week at home to expect a production spike – which may not result in many sacks of Deshaun Watson necessarily – but still increase the likelihood of defensive pressure.

The Browns OL has struggled to protect Baker Mayfield, particularly at the tackle position. Hubbard will likely be questionable for the game but was already a mismatch for Dante Fowler fully healthy, so this is one of the two key matchups heavily in the Rams favor.

RG Eric Kush entered this season for the first time in his 6-year career as the starter and now faces off against the reigning 2x Defensive MVP Aaron Donald, who terrorized the Saints more-talented interior OL in week 2.

I would expect Donald and DT Michael Brockers to win their matchups on the right side handily, with left tackle Greg Robinson likely being at least tested by DE Clay Matthews and Fowler when he switches sides.

The Bills defensive line accounts for four of the defense’s five sacks and have a collection of players who can get after the quarterback at a relatively high level in Oliver, DEs Hughes, Shaq Lawson, and Trent Murphy. Against a reeling offensive line with a bottom-3 tackle duo and inexperienced interior, this is the sort of week to expect a rise in pressure from the Bills defense, especially at home.

Michael Jordan wasn’t playing well prior to the injury and is out for at least Week 3, meaning Billy Price gets back into the lineup. Price can provide a boost in the run game with his power but likely won’t move the needle much in pass protection, making this an overmatched OL across the board.

The Lions OL hasn’t given up much pressure through 2 weeks and performed admirably as a unit last week against the Chargers, although it limited the offense due to the amount of help schemed into helping in protection, resulting in just 13 points

This week they go on the road in a hostile environment with Decker coming off a missed week and poor performance against Chandler Jones in week 1. He will be tested with the Barnett/Sweat rotation. Sweat has flashed some very impressive skills as a rusher averaging only 16 snaps a game, while Barnett provides the sort of high-effort rusher that is increasingly difficult to block as the game wears on.

The biggest concern is usually with whoever is tasked with blocking Cox and that is the case this week in Glasgow, who is going to see a major uptick in competition after not seeing a high-quality interior rusher in either of the first 2 games.

1. Cowboys OL vs. Dolphins DL
It really is as simple as a top 2 OL going against a bottom 2 DL. It would be shocking to see the Dolphins amass any significant amount of pressure in this game.

2. Eagles OL vs. Lions DL
The Eagles OL will have their hands full in the running game against a formidable run-defending defensive line, and despite their defense having six sacks those have largely come from blitzes and against two bottom-5 offensive lines (Cardinals/Chargers).

The Lions best pass-rusher is Trey Flowers and he only has one clear mismatch on the line and that is if he slides inside and rushes over LG Isaac Seumalo. There just aren’t a lot of ways to see this Lions front pressuring Wentz unless the Eagles play from behind for a large portion of the game.