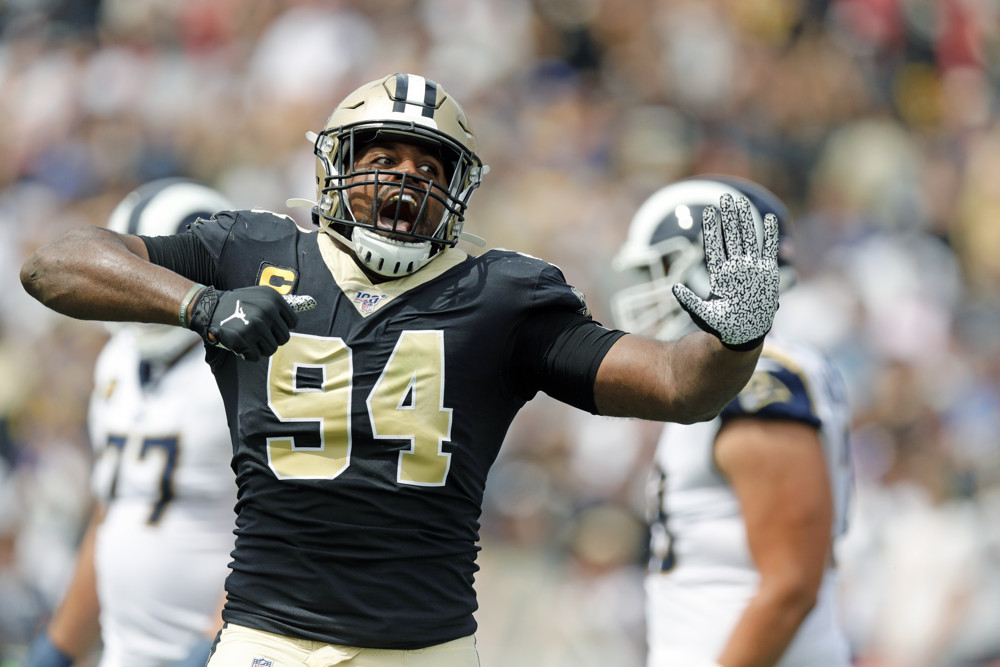 Marcus Davenport came into the NFL as a rookie in 2018 as a guy with awe-inspiring physical tools but raw in his technique as a pass-rusher and looked that way for much of his rookie year aside from some flashes of brilliance sprinkled in.

So far in 2019 Davenport is already 1 QB hit (11) off his season total from 2018 (12) and has quickly bridged his talent and skill gap, giving the Saints perhaps the best edge-rushing duo in the NFL. Jacksonville has two talented tackles but one is a rookie (Jawaan Taylor) and the other has only been solid in his young career while dealing with a variety of injuries (Cam Robinson).

‘Solid’ won’t cut it against these edge players and the Saints overall DL are an extremely deep group. Jacksonville has a rotation going at right guard between Will Richardson and A.J. Cann, neither of which provide much more than adequate pass-blocking ability, so there will be plenty of opportunity for the Saints DL to win matchups across the line.

2. Steelers DL vs. Chargers OL
Key matchups: DL Stephon Tuitt vs. RG Michael Schofield, DL Cameron Heyward vs. LG Forrest Lamp, OLB T.J. Watt vs. RT Sam Tevi
Notes: Steelers defense ranks 7th in DVOA, the DL ranks 2nd in adjusted sack rate (10.1%) and has the 3rd most sacks (19). The Chargers OL ranks 16th in adjusted sack rate (6.8%) and is tied for 13th in sacks given up (11). Per PFF, no OL has given up more QB hits (16). Chargers center Mike Pouncey was put on injured reserve after week 4, forcing LG Dan Feeney inside to center this week with Forrest Lamp taking over at LG.

Forrest Lamp finally gets into the starting lineup after seeing the most action of the season last week against the Dolphins, playing left guard, left tackle, and rotating in as the 6th OL in heavy packages. He looked solid but the fact that he hasn’t been able to crack the starting lineup on a below average at best OL as a former 2nd round pick has been one of the more befuddling OL-related stories in the NFL over the last few years.

While I liked Lamp as a prospect coming out of Western Kentucky and think he could upgrade the LG spot with time, he will need to prove it first and faces a very stiff test in one of the better, more productive interior DL groups in the league against Pittsburgh.

Add in the Chargers having one of the worst tackle duos in the NFL with T.J. Watt facing off against Sam Tevi, and there is a clear path here for the Steelers front to create disruption in a multitude of ways.

Nick Bosa went off on Monday Night Football against the Browns and really made people aware of how spectacular a rusher he really is, especially considering it was just his 4th game as a pro. Bosa has been very good all season and along with DeForest Buckner in the middle with Dee Ford aligning up across the front, represent as potent of a pass-rushing trio as there is in the NFL.

The Rams OL has really struggled at three positions: LG, RG, and RT. Bosa and LT Andrew Whitworth should be a great matchup but RT Rob Havenstein hasn’t looked the same as last year early on this season, so if Bosa switches sides or when Ford is over there that is a concerning set of matchups from a Rams perspective.

Buckner on the inside should be able to feast on the guards since they are less effective as pass-blockers than run-blockers and not playing well overall. The 49ers’ defense has been outstanding this season (2nd in DVOA), representing an extremely difficult test for an above average Rams offense that is still trying to find an identity early on.

The Eagles pass-rush exploded last week, sacking Jets QB Luke Falk 10 times with a litany of exotic defensive fronts, stunts, and more blitzes than we are accustomed to seeing from a Jim Schwartz defense.

DE Brandon Graham notched all 3 of his sacks last week as a 3-technique (over the guard) and has the skill-set to do a lot of damage in the same role moving forward, especially with Fletcher Cox getting back into form and garnering a ton of attention from the various alignments he plays from.

For Philly to replicate or even approach the level of success they had last week starts with their ability to slow down the Vikings’ ground game, which is where everything starts for their offense. Minnesota is rushing the ball the 5th most in the NFL this season (153 attempts) and is tied for 3rd in yards per carry (5.4), but the Eagles boast the 4th best run-defense DVOA and are 2nd in yards per rush allowed (3.25), making this matchup critical in determining the level of pressure that can be applied to Kirk Cousins.

The Vikings have a below average OL that will struggle to hold up against the slew of impactful pass-rushers and versatility the Eagles have up front if the run defense plays relatively well, which is a safe bet to make.

The Cowboys DL hasn’t really had a big game as a group yet this season in terms of rushing the passer, but like the Eagles last week get to face a bad OL that has shuffled around starters and made matters worse. Demarcus Lawrence is such a force off the left edge of the defense that protection schemes have built what they do around stopping him using various chips, alignment, and slide help. DE Robert Quinn looks as explosive as he has in years and has a deadly cross-chop move that should give Beachum a lot of trouble. DT Maliek Collins has flashed as a rusher many times this year and does a lot of nice work on stunts.

The Jets OL faces a tougher test this week than some may think as the Cowboys have the necessary players to take advantage of their matchups and spoil QB Sam Darnold’s return from mono.

The metrics I typically use to get a gauge on OL/DL performance aren’t signaling a great mismatch for the Rams DL, but Mike McGlinchey went down last week and will miss the next 4-6 weeks with a knee, while Joe Staley continues to be out from a broken fibula.

49ers head coach Kyle Shanahan is an offensive mastermind that will be able to scheme around his losses to a degree, but not having either starting tackle who are each very good players PLUS fullback Kyle Juszczyk slated to miss the game makes the task increasingly difficult against a DL featuring the most dominant defensive player in football (Aaron Donald), who was already a huge mismatch for each of the interior OL.

Add in Dante Fowler Jr. (tied for 4th in the NFL in pressures) getting to go against two inexperienced tackles and there are plenty of reasons to expect this matchup to buck the trend of what certain stats are telling us.

Tyron Smith is slated to return this week and will cure the ills the unit faced last week against the Packers even if he is only 80% or more of the level he normally plays at. La’El Collins went down last week but is also on deck to play in this one.

The Jets have very little firepower on their defensive front with Leonard Williams having a down year so far, and the Cowboys have primarily very good OL across the board. This one is pretty cut and dry with very little reason to expect the Cowboys OL to struggle assuming Smith and Collins both play.